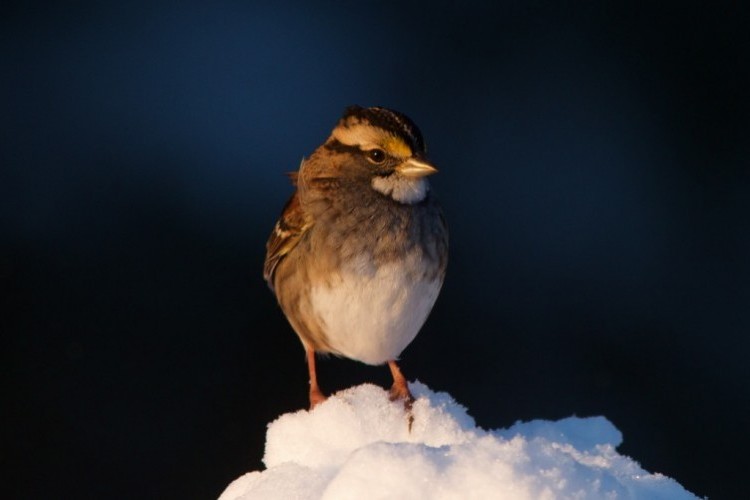 “She stands motionless, listening to the resonant stillness. Then, slowly, she draws a new breath. In a voice not her own, yet somehow strangely familiar, she begins to sing.”
–John Luther Adams quoting Orpingalik, a Netsilik elder, in Winter Music (2004)

I have the habit—before dawn, while it is still winter’s dark—of running in Central Park. On some of these chilly mornings, in a still place amidst almost two million humans, I stop to hear a single song (click for audio; ref. 136579) rise out of a leafless bush—like a shimmering light.

The first time that I heard a white-throated sparrow sing in Central Park in the heart of winter, I was a visitor. In my alienation, I thought that the song in this place, on December 31st, indicated that something was wrong. Perhaps the bird had somehow forgotten to migrate south because of climate change. Perhaps, because of that, it had mistakenly believed it was time to find a partner, defend a territory, and breed.[1]  I also discovered an azalea blooming on that same warm, snowless end-of-the-year day.

Later, I moved to live in Manhattan. Then, as a community member, I learned that while the azalea I had spotted in flower indeed had been unusual, it had long been a habit for some number of white-throated sparrows to find their winter homes here and, from time-to-time, to sing. These winter residents of the Park were mostly from the northeastern boreal forest where their parents had fledged them, and they had flown across early fall nights to get to their destinations. Most of the survivors would return to the boreal forest in the spring to breed once again, though a few stay around New York through the spring and summer to nest.

Some people hear the song of the white-throated sparrow as an anthem of North America’s boreal wilds, a patchwork of unique places spreading east to west across the continent, including the forests of the northern plains area now called Alberta, Canada. Here is a land smelling of melted snow-mud and white spruce, balsam poplar, and trembling aspen, harboring reindeer lichen and feathermoss. The birds’ song mingles with the shush of wind through needles and whirring leaves, the buzz of mosquitoes and black flies, chorus frogs creaking, and running water swimming with whitefish. The white-throats’ bright tune might be heard amidst the gravelly trumpeting of sandhill cranes and the scuffling of caribou who have so far escaped gray wolves who, eluding each other, may yet live another day alongside humans, including Woodland Cree and Dene Tha’ as well as French and English.

If I rest motionless, I can begin to imagine this sparrow’s land, long ago, and full of changes. It is late in the Cretaceous Period, some hundred million years past. Continents were rifting apart; mountains were forming; the very ground was ever-shifting. The climate was relatively warm. Seas were high and water lapped in a wide band curling from the Arctic Ocean to the Gulf of Mexico. Briny waters swimming with plesiosaurs buoyed silent coiled-horn ammonites. The likes of neither survived this period, nor, famously, did most of the dinosaurs, with its end marked by an enormous asteroid crashing into Earth, cooling climate, dropping sea levels, drying land. But the bird ancestors endured—the seeds of song not yet unfurled—as did ours, still four-footed and, as yet, wordless. Meanwhile the early flowers went quietly blooming across Earth and ancient bees buzzed and still do. The seas went on radiating with early diatoms (a sort of silica-shelled phytoplankton), which, as all chloroplast-green things had done for billions of years, hummed out oxygen as they inhaled carbon from the air into their bodies, were eaten or died, and then were buried.

The kinship of life in this fashion, astonishingly, slowly transformed Earth’s atmosphere to maintain global temperatures within a range that supported more and more life. That host of little carbon-filled bodies, left behind as the Cretaceous oceans withdrew, sank deeper into Earth. And over them for millions more years, winds blew and glaciers came and went, leaving behind silt, sand, and gravel, and atop them, a march of plants and animals shifting with these shifts, some dying away, others evolving into new forms. In spite of some massive setbacks, on balance, over time, Earth’s community was becoming richer and more diverse in life forms and voices.

I imagine how the bird-ancestor survivors of the Cretaceous extinctions split into family lines, lifting themselves through time and chance into all of today’s continents. Long ages before there were humans to hear them, ancestral voices, such as of broadbills and pittas, called out in Africa. We thus were to be born, some mere two hundred thousand years ago, into a world full of long-practiced chorus. Meanwhile, around fifteen million years ago, ancient passerine progenitors of the white-throated sparrow were venturing forth from Australia, to northward-drifting Asia and Europe and to North America. Eventually this lineage of birds intertwined their evolution with the continuing, wide-spreading diversification of flowering plants, their seeds, and their fruits, draping this branch of the avian family tree with a variety of some of Earth’s most melodic voices. It was more than a million years, then, after the white-throated sparrow emerged from that line, with its unique anthem first ringing forth within a world walked by mammoths, that our human ancestors finally arrived in their midst—journeying out of Africa and reaching North America perhaps fifteen thousand years ago.

And some time after that, in that ancient sea-band formerly stretching from the Gulf of Mexico through Canada, wherever it was warm and dry enough, an ocean of prairie grasses spread until it touched northern winter-cold and the plains-land sprouted trees sparkling with ribbons of waterways. Here now is where so many white-throats make their nests. So do perhaps as many as one hundred and seventy million birds of some two hundred and ninety two species—a nursery for clouds of migrants flying to and from North and South America, filling a continent with song—amidst a forest of chloroplast-green things.

Plants, as they have done for billions of years, have continued reaching out for sunlight, inhaling carbon, sharing and burying it, refreshing atmospheric conditions supporting life. Here now in the plains boreal, the trembling aspen and spruce, fir and feathermoss, wild rose and sparrow, and wolf, caribou, and Cree are rooted above ancient sea sediments pressed together and heated up over the ages. As a result, some of that primitive life underground slowly became transformed into smaller hydrocarbons. These light gases floated like ghosts deep into hollows of sandstone rocks. Heavier molecules welded themselves into coal and into oil, which moved as Earth’s ever shifting crust heaved it up nearer its surface, saturating about thirty-five million acres of grainy soil northward supporting Alberta, Canada, containing some 240 billion tons of carbon. This sequestration of carbon from air allowed bird song and human words to come forth and, eventually, to flourish together into the present.

“Canada” is a Huron word that has roots meaning something like “home.”

The province of “Alberta” was named in 1905 for a British princess, heir of an alien civilization historically dependent upon exploiting land as a set of “resources.”

For some people today, this carbon-full place is sacred ground within which they live as community members, evolving slowly amongst each other—soils, waters, plants, themselves and other animals, air and sunlight, collectively.

For some people, this carbon-full place is a resource called "tarsands," meaning fuel and money in the bank. To use the land this way means scraping away millions of years of life evolved on top of life, sending ripples of destruction downstream, through food webs, and into the air. It also means that everyone on Earth faces, inescapably, the irreversible, unintended global climate-changing consequences of further increasing greenhouse gases and rising global average temperature beyond any our species has ever lived within. These include changes in the times plants flower and, indeed, alterations in the migration patterns of some species, which may or may not match up with seed, fruit, and insect food availability; melting glacial ice and permafrost; more widespread and intense droughts in dry areas; heavier deluges and floods in wet areas; more intense, vast hurricanes like Sandy that recently swamped a raft of oceanic islands, including Manhattan.

In modern times, people have put words in the mouths of white-throated sparrows. Some hear them sing, “Old Sam Peabody Peabody Peabody.” The best I can make out, this was the name of a well-known socialite and House of Morgan banker who died in 1909 at the ripe age of eighty-four (click for audio; ref. 15574).

Other people hear in the bird anthem of the boreal, the words, “O Sweet Canada Canada Canada" (click for audio; ref. 18735).

If, on a dark winter morning in Central park, I listen long and still enough, I hear no words (click for audio; ref. 15581).

I hear a miracle.

Special thanks to the Cornell Lab of Ornithology Macaulay Library for the White-throated Sparrow recordings (reference numbers correspond to the clips in the text above):

Endnotes [1] It so happens that my ignorant musings were recorded by Anthony Ramirez, a reporter roving Central Park that day. My error was, unfortunately, thus reported in “Like It or Not, City’s Lack of Snow is a Rarity,” The New York Times, Monday, January 1, 2007. I am happy to have the opportunity now to correct it.