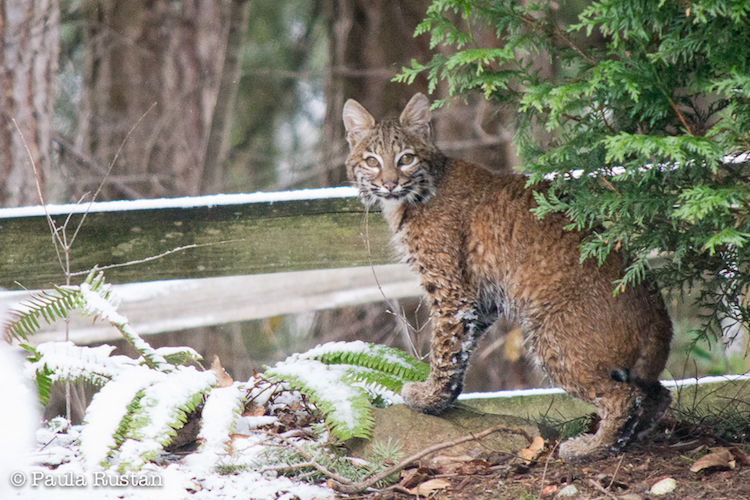 For birds in winter, the land around the city of Bellingham, Washington, is a good place to be. Sheltered from storms of the outer Pacific coast, tucked where the lower Fraser and Nooksack River floodplains collide, greater Bellingham normally harbors a mild, ice-free trifecta of salmon-bearing waters, open fields, and fertile shorelines. This makes for some of the greatest eagle density (and overall raptor diversity) on the continent; loads of swans, snow geese, and other waterfowl; and scads of sea and shorebirds. And we have a number of delightful wintering passerines (perching birds)—juncos, chickadees, kinglets, varied thrushes, sparrows—who find our coastal climes more tolerable than those to the north and east. But those with backyard birdfeeders on the edge of town should never pretend they watch them alone.

Roger Gilman and Paula Rustan learned as much when, as a surprise this past January, two nimble bobcats appeared in their backyard near the edge of city limits. Their photos dropped jaws from subscribers to our local birding listserv and with supporters from the North Cascades Institute, where Roger and I took a field class together. One cat vanished (a typical bobcat ruse) while Paula ran for her camera, but she managed to photograph the second, slower one in a nonchalant prowl. Curious and comfortable amidst the fresh-fallen snow, the bobcat—like the feeder birds he watched—balanced hunger with oblivion.

Roger and Paula had a larger bobcat in their yard two years ago, and they believed this year's visitors—which closely mimicked that old cat's very path—were young litter mates from last April or May, striking off on their own. But before any more speculations could be made, with just as much silence as his arrival, the lingering bobcat leapt the fence to the natural area the city has conserved nearby. Gone. 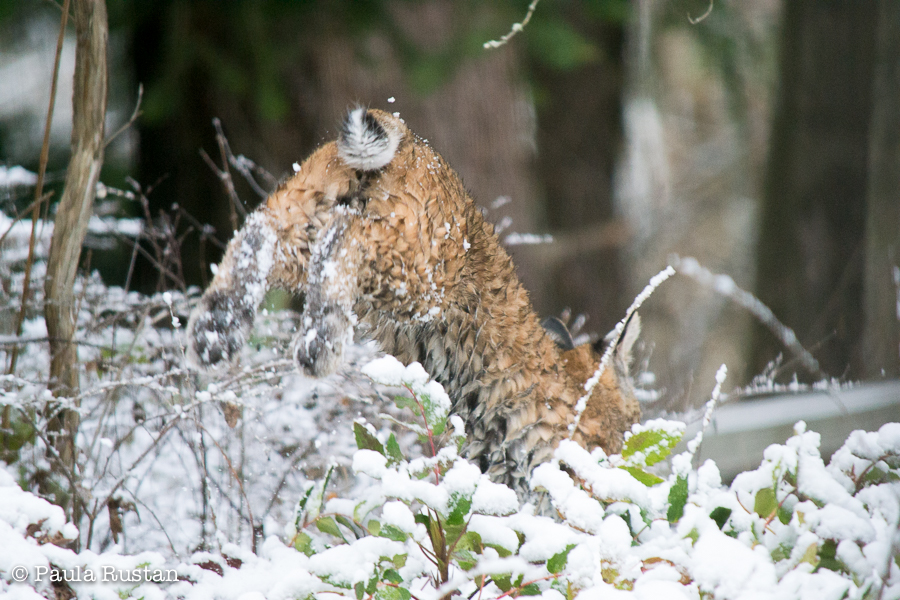 Bobcats are hard to see, even when they're near. They're mostly nocturnal, silent, solitary, and exquisitely camouflaged. These qualities stack the odds against us, but for those in western Washington who are lucky enough to see them at all, this winter—one of our wintriest—was as good a chance as any. Unlike the lynx—a ghost-gray hare-hunter equipped with wide, web-like feet for the deep snows of remote forests—the bobcat stands out when our lowlands turn white. They've been called the "bay lynx" for their wetland predilections, and their scientific name—Lynx rufus—aptly evokes their tawny, spotted pelage. Without the feet for deep powder, bobcats are quite opportunistic in their tastes, slinking along edges in search of birds and a range of small mammals, even young deer. Bobcats are stalk-crouch-wait-POUNCE hunters, and here in western Washington, it may take up to six square miles of patchy forested habitat to sustain an adult male bobcat on this fare. 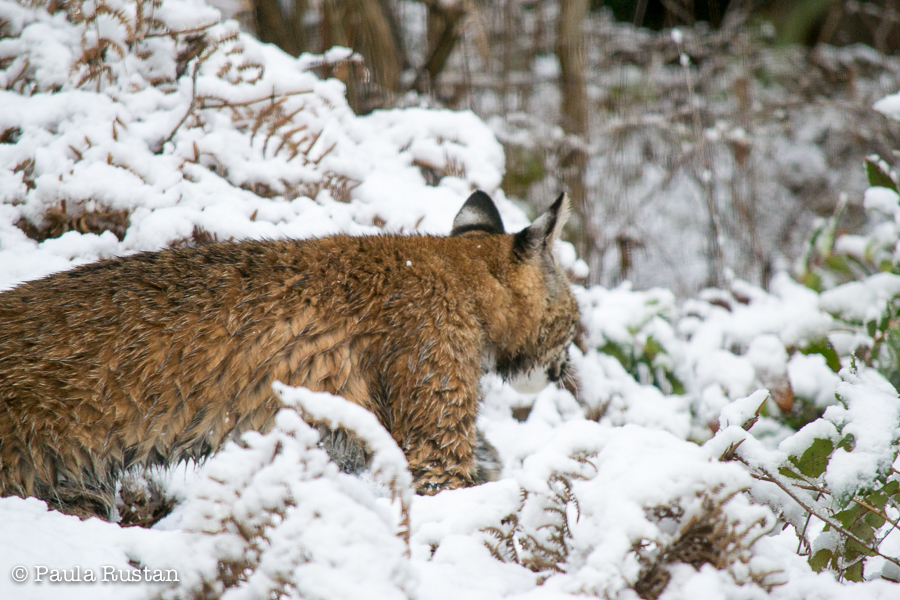 Roger and Paula are on to something with their theory of bobcat family planning, too. Bobcats disperse about eight months from birth, just in time for the arrival of the next mating season. This means that, by now, some pretty intense demographic shakeups are going down as bobcats (re)establish new turf, woo mates, and mate. Other than the yowling rebuke a female bobcat may release in the face of competing males, I've recently been on the lookout for a defiant "scratch" or "scrape." With front feet firmly planted, the tom makes this sign with the forceful, repeated etching of his hind feet. If he's done a good job, he'll have scooped out two, five-inch long troughs—like bicycle skidmarks—into the muddy earth. Inevitably, his earnest force results in a collection of scent-absorbent materials (moss, wet leaves, etc.) at the end of his kick. This is no footprint to be confused with your housecat. This is where he releases all the scent he's got from special sebaceous glands in his feet, perhaps adding some urine or scat. This is where he says to all the ladies: I am here, and I smell good.

I haven't found one, yet. Had I the Jacobson's organ to fully "taste" this smell with a lip-curdling flehmen response, I might start getting a little jealous or angry or sad. But the truth is, I have no clue what this mingling of scents and sense does to a feline brain. I once thought I had a knack for detecting my dog's lies, but I've never claimed to comprehend cats. They're moody contortionists. They whine, and need litter boxes. Then, when a new study broke in 2013 that domestic cats killed up to 3.7 billion (billion!) birds annually, any hope of becoming a "cat person" seemed gone forever.

But I have to say, wild cats are different, as I think most Felis catus and Lynx rufus placed together would agree. Without expectation to contain their catness, I've always known them—or rather, encountered them—for the mysteries they are. The bobcats I've seen have never been expected. The cougars I've not seen have always felt close, watching me. The one lynx trail I've found may still be my greatest tracking prize. And this is why bobcats stole the spotlight a listserv meant for birds: because they can appear, bird-like, out of nowhere. Or, out of what we thought was nowhere. 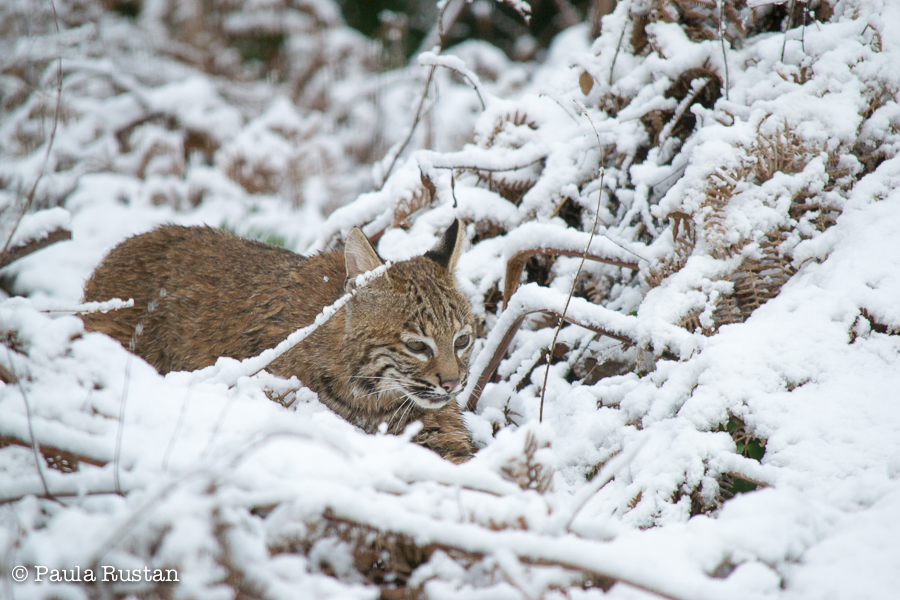 From the snow leopard to the Florida panther, motion-triggered cameras are finding feline conservation heroes where we never knew they lived. And so too, when I heard about a backyard bobcat in town, I thought twice about what we tame, or might, or thought we have. We have all sorts of fancy analyses to tell which land should be conserved, and they're great, we need them. But the bobcat's lithe movements help ground-truth what we scheme, revealing and inspiring the little wildernesses we might connect and protect: those scrappy woods, that forgotten hedgerow, the pathless park corner, the swamp. And this white, cold winter has been a reminder that we're learning this land with bobcats, each of us watching for the turn of seasons, waiting to share in the next wild opportunity.

Rob Rich is a naturalist and writer exploring where people connect with land, water, plants, and wildlife. That's why he's a particular fan of beavers, and the diverse watersheds they help us conserve. His work has also appeared with Camas, High Country News, Whatcom Talk, and others.