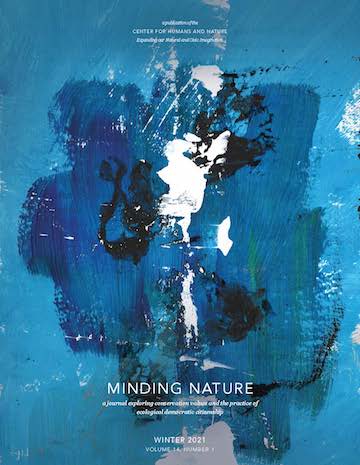 The Covids of Our Climate

A year ago the focus of the world’s attention abruptly shifted as a new and dire infectious disease spread rapidly through the human population. Both our public and our private lives were reshaped by a condition we have learned to call “pandemic.” We are still trying to take the full measure of what is happening and its significance beyond the immediate existential crises of dislocation, deprivation, suffering, and death.

The Year of Autumn Lilacs

I am pandemic sheltering at home, along the lower Wisconsin River, at the eastern edge of the Driftless Area, amid a grassland expanse called Cassell Prairie. One basic fact of life here is that the soil is sandy. The sand is the legacy of a great flood that roared down the valley to the Mississippi River at the end of the last glacial epoch, seventeen thousand years ago.

Since at least the 1960s, when British sci-fi writer J.G. Ballard published The Drowned World, novelists have written about climate change. Over the decades, interest in the subject grew, and, today, novels about climate are so popular they’ve become their own genre—climate fiction, or “clifi,” as it’s sometimes called.

When the levees breached and New Orleans waters started surging under the front door of their home, Delores Ossevaito and her husband didn’t have time to grab anything except their two dogs before dashing outside, unmooring their boat, and jumping in. For four days and nights, as the detritus of Hurricane Katrina slurped around them, they had nothing to eat and no idea what was going to happen to them once the waters receded. It was tough, Ossevaito told a reporter.

Where the lichens dwelt, the texture of the surface softened and seemed almost creamy. My eyes softened, too. My gaze grazed the lichens, and I felt as though I could ingest the stone, which had become palpable, touchable, edible. My vision worked in two directions: by watching the lichens softening the stone, I was touched by them, and mollified by their touch. They gave back my gaze, and receiving theirs made me soft. The lichens were a dreaming of the rock. And I was a dreaming of the lichens.

Original Participation and the Recovery of Primal Mind

The purpose of this essay is to go beyond recorded history into an exploration of mind in deep time—of human consciousness spanning a million years or more. It is a journey, both anterior and interior, into the primal mind of our early human ancestors. Early people displayed at times a remarkably “modern” aesthetic sense, and I think they also possessed—as the evidence suggests—a sacramental consciousness. Remembering and even re-awakening the primal mind can bring healing to our painfully dislocated modern consciousness.

What Does It Mean To Be a Farmer in the Twenty-First Century?: Apart and A Part

What does it mean to be a farmer in the twenty-first century? We do not yet know. The answer is being uncovered, by labor of the mind and hand, through creative processes in emerging communities. Or maybe it is a rediscovery of agri-culture that was lived as a partnership, as healing, conserving, and restoring life.

Special Section: The Legacy of the Geography of Hope Conferences:

Kinship and the Geography of Hope

Kinship is a word I’ve only in recent years come to know and appreciate. It’s a concept that, in retrospect, was at the very essence of Geography of Hope, a weekend gathering that took place nine times over the course of a decade in the small village of Point Reyes Station on the coast of Marin County, neighboring the Point Reyes National Seashore.

A New Chapter Began with the Geography of Hope

In December 2014, I attended an event hosted by Point Reyes Books at the West Marin School Gym. The gym was sold out, packed with over three hundred people. Point Reyes Books co-owners Steve Costa and Kate Levinson stood up at the beginning, announcing their upcoming events, including the Geography of Hope weekend conference on “Women and the Land.” I sat up in my seat and leaned in, listening intently to the list of events that would focus on nature, spirit, place, and women environmental writers.

When the country shut down in March to stem the pandemic, I began each day by going outside to sit and do nothing but sense. I listened to the twelve species of birds who live around me, watched the winds moving each tree according to its structure, my eye drawn to the intensity of greens. I listened to the creek roar in the spring and go quiet in summer and fall. Interspersed were the sounds humans make—cars, voices, power tools, a bouncing ball.

In these last hours of 2020, a long year of global pandemic and political unrest comes to a close. This is a time of racial reckoning, accelerated climate catastrophe, and economic inequity. In spite of this truth, I am grounded in gratitude for the gift of life and for the awareness of the brevity of this gift of life.

A dream is unfurling inside the ground. The earth that touches the soles of our walking feet is dreaming us into life. For much of our presence on Earth humans understood this: we knew ourselves to be starlight, freshwater streams, the miracle of our own hands. Then we forgot. Lately, people are wayfinding to recover earth intimacy—to generate new, old ways of dwelling in the biosphere’s imagination.

How I Was Reared through the Geography of Hope

It is not an exaggeration to say that the series of Geography of Hope conferences hosted by Black Mountain Circle guided me onto the path of living my soul’s work. I write this sitting in the apartment I just moved into, which overlooks a natural river flanked by large volcanic rocks full of weighty presence and a lush tropical jungle full of vibrant life on the island of Kauai.

Looking out of the corner window, the sea is cut in half. The sun may be out of sight, but I know that it’s setting—it’s that time of day. Again. With its last gasps of warmth the sunlight slices through the window and saturates the air around me, painting the walls orange, arousing a craving for ripe nectarines. The afternoon rays relay a message from the sun to tell me it's time to get off the internet. Stand up for the first time in however long.

Shiva on Freedom, Separation, and Surveillance

In her latest book, Oneness vs the 1%: Shattering Illusions, Seeding Freedom, Vandana Shiva, with Kartikey Shiva, offers an expansive critique of the most recent iterations of colonization around the globe. The book constitutes a call to action in support of freedom and democracy as well as cultural and ecological diversity, and against control, separation, reductionism, and greed. Focused largely on the last two decades, Oneness weaves together sweeping theoretical sections with empirically detailed and extensively referenced chapters.

A Life Story, and Plan for Planetary Repair

Diana Beresford-Kroeger could have written a dramatic memoir about childhood neglect and the journey to overcome it. However, she admits to being a reluctant memoirist and sees the telling of her life's story in To Speak for the Trees: My Life's Journey from Ancient Celtic Wisdom to a Healing Vision of the Forest as part of the fulfillment of the sacred trust passed onto her by her elders.

Every culture, I learned—ancient and extant, subsistence-based or technologically steeped—has myths. These are the stories that animate the way we perceive the world; uphold certain kinds of behavior as commendable (taking care of strangers, for example) or abhorrent (being insatiably greedy, for example); and plumb the mysteries of how we as humans are related to other kinds of creatures and the lands we call home.

I was inspired by the resilience of nature in the face of urbanization, and the beautiful patterns and textures you can see when moss, wind, erosion, ivy, roots, etc. are left unattended. Like the saying goes about weeds and all, they just spring right up the moment you’re not looking! I like that. I was always a city dweller—I was born in St. Petersburg, Russia, and then I moved to New York City with my family. I always lived out on the outskirts, though, where things would be a little neglected, and alive with growth. Even in the dead of winter the roses would bloom in the snow.

From the Ground Up: The Art of Place

I am sitting in a low-slung chair, tucked into the shade of a corner nook in my backyard. It has become my favorite place to simply be, a space where I am learning to pause and listen and breathe. Even with the white sound of the distant freeway, my backyard is my sanctuary from the noise. The late afternoon light is warm but not hot for my bare feet resting on the inlayed brick patio. I am encompassed by the scent of fresh lilacs. Soft tufts of blossoms burst from three large tree-like shrubs that edge this sitting spot.

Curled suburban cuddle in front of the fireplace,
possum-dreaming and paw-kicking, your fur
a tumbleweed down the waxed hallway, your ears
cropped and your tail docked

A Forest Apologizes to Children as the World Heats Up

You walked in my body
not so long ago, stood
against my veins of trees
and watched me breathe water.

Children, suppose you
were born as birds.
Inside your hearts as
capable as magnets

The upward dive of otter’s head cracks ice across a pond.
A freeze spreads over snowless Earth,
Thin, like Christmas cards,
Snapped before the Atlantic Ocean,

If We Forget about Having to Shout: A Covid-19 Poem

If we forget about shouting,
Hello, at neighbors,
neighbors yawning
opening windows to yell

A friend recently told me a lot of poets
don’t consider Mary Oliver a poet
Build that wall. Build that wall.
What puts a poet on the right side of an MFA

“The thing about singing,” said grandpa,
“is you have to keep singing for it to come true.”