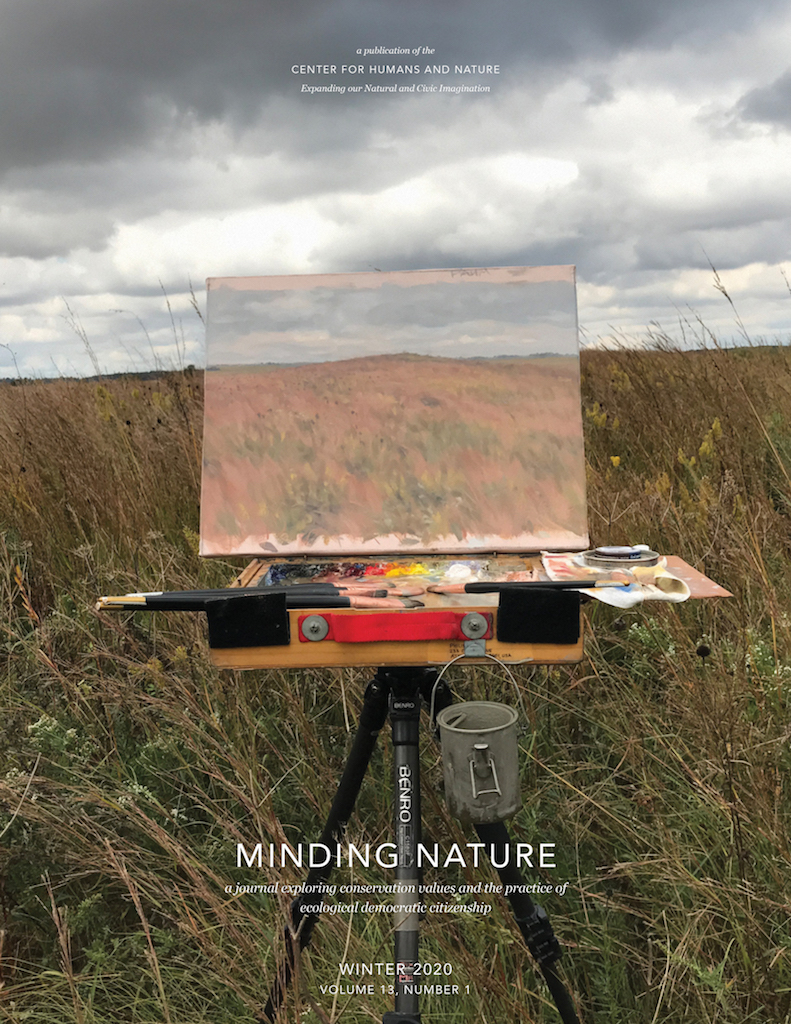 Between Hubris and Humility

Woody Allen’s film character, the quintessential big city dweller, indoorsman, and nervous metaphysician, remarks somewhere, “I am at two with nature.” By this he means he is not against the natural world per se but does feel apart, anxious, ambivalent, and not at home in it. When he is in nature, he is not of it.

Walking the Line: The Cost of Lost Kinship When We Militarize Borders

The Humboldt Connection between Nature and American Art

Humboldt’s quest to understand the universe—his concern for climate change, his taxonomic curiosity centered on New World species of flora and fauna, and his belief that the arts were as important as the sciences for conveying the resultant sense of wonder in the interlocking aspects of our planet—makes this a project evocative of how art illuminates some of the issues central to our relationship with nature and our stewardship of this planet.

September 14, 2019 was the 250th birthday of Alexander von Humboldt, and celebrations have been going on all around the world, from Lima to Quito and Bogota to Victoria, BC, Chicago, Philadelphia, and Durham to Paris and Halle and, of course, Berlin. In March 2020, the Smithsonian Museum will open a special exhibit on Humboldt and the United States that will keep the celebration going through next August, even as the wave of new books and articles about Humboldt shows no sign of slowing down.

Once Alexander von Humboldt settled down in Paris after his monumental five-year journey through the Americas, he started to publish books. Among the first was a massive coffee-table extravaganza titled Vues des Cordillères, et monumens des peuples indigènes de l’Amérique (Views of the Cordilleras and monuments of the indigenous peoples of America). If you are ever so lucky as to find a copy, open it to the first plate, “Statue of an Azteck Priestess."

Looking Out the Window: The Political, Intellectual, and Moral Necessities of Modern Environmentalism

In the beautifully illustrated The Adventures of Alexander von Humboldt, author Andrea Wulf and illustrator Lillian Melcher depict Alexander von Humboldt and Aimé Bonpland’s arrival in Cumaná, South America, in 1799. While unpacking their scientific equipment and remarking on the species they had already seen (and just on their way to their lodgings!), Bonpland turns to Humboldt and says, “But have you looked out the window?” It was a slave market.

In a passage originally published in the exhibition catalog An American Place, one of America’s greatest painters, Georgia O’Keeffe (1887–1986), reflected upon the power of learning to see a flower: A flower is relatively small. Everyone has many associations with a flower—the idea of flowers. You put out your hand to touch the flower—lean forward to smell it—maybe touch it with your lips almost without thinking—or give it to someone to please them.

Thomas Berry (1914–2009) was one of the twentieth century’s most prescient and profound thinkers. As a cultural historian, he sought a broader perspective on humanity’s relationship to the Earth in order to respond to the ecological and social challenges of our times. Berry began his studies in Western history and religions and then expanded to include Asian and indigenous religions, which he taught at Fordham University, Barnard College, and Columbia University. Drawing on his explorations of history, he came to see the evolutionary process as a story that could help restore the continuity of humans with the natural world.

A Matter of Time

I wasn’t after this kind of thinking when I did my fieldwork at the Ballena National Marine Park in Costa Rica’s South Pacific. At the time, I was more interested in the concept of the boundary, that imaginary line separating a protected from an unprotected area—the way it is used and how it affects the humans-landscape relationship in place.

“I’m scared!” shrieked a petite fifth-grader as she grabbed my hand. Her anxiety was palpable. She was frozen in her boots, resisting forward motion as if she were about to be pushed off a cliff....We were in Chicago, one of the flattest places on Earth, and there were no cliffs here on the city’s south side at the Forest Preserves of Cook County’s (FPCC) Beaubien Woods. Instead there were tall grasses, a sprinkling of trees, and a small oblong lake.

On Funding, Fossil Fuels, and Femicide: A Conversation with Rachel Heaton and Roxanne White

Ayana Young (AY): Hello and welcome to “For The Wild” podcast. I’m Ayana Young. Today, we are speaking with Rachel Heaton, who is an organizer and co-founder of Mazaska Talks, and Roxanne White, who works with Missing and Murdered Indigenous Relatives No Borders. I want to just start off by taking some time to thank both of you this morning. I feel incredibly humbled to have the opportunity to be in conversation with two such incredibly powerful leaders in the indigenous rights and environmental movements.

Matt Stansberry (MS): The basis of this panel was to bring together a transdisciplinary group. This audience is largely a gathering of biologists, policy folks, and people working in the field of conservation, and what I wanted to do with this panel was bring outside perspectives on the big challenges.

In a field surrounded by budding, deciduous trees, a crowd of ten-year-olds is staring at a naturalist describing the spring wildflowers of Northeast Ohio....I am standing in the back with my mom, whom I am visiting for the day. She is a special education assistant at the elementary school, where she works with students as a one-on-one aide. Today she is along on an end of the year field trip to the Brecksville Metropark.

We need beauty desperately during these troubling times. Forced human migration. Climate change devastation. Polarized viewpoints. Losses of freedom, agency, the ability to survive. Needless deaths, human and ecological. It seems the list of atrocities and dire concerns is endless. It sometimes feels like there is nothing we can do that will effectively meet, much less reverse, the damage to which we bear witness every day. But even amidst the crises at hand, there is hope.

Finding Our Way: The Science of Wayfinding

My dad always had a strong sense of location, no matter where he traveled. He would step outside of his hotel and he would know—based on the time, the location of the sun, and the hemisphere he was in—exactly where the cardinal directions were. However, my parents have now taken to using a vehicular GPS when they travel to their vacation rentals in the U.S. northeast, as my dad has gotten lost one too many times.

Painting Prairies of Illinois: An Interview with Philip Juras

American landscape painter Philip Juras has keenly captured some of the remaining wild landscapes of Illinois during a six-year study of the state. Here he discovered a surprising diversity of prairie plant communities that were a bit different from the grassland remnants he studied in his home state of Georgia. Philip was invited to take this visual journey by one of Illinois prairies’ biggest allies, Wendy Paulson, to discover and capture these lovingly restored Midwest landscapes.

Sixteen Reasons to Build a Fort in the Woods

1. As an excuse (if you need one) to go outdoors.
2. As a shelter; you can say it’s from the wind, snow, or wildlife, but you admit to yourself it’s from other people—and monsters.
3. As an escape; from home, the city, the daily grind, civilization; a place where your imagination can roam freely in the wilderness.

Nature of the Internal Environment

My investigations take the form of collages exploring the intimate physiological and emotional relationship between the human form and plant life. What interests me most is the way in which the human anatomy corresponds to structures in nature, plants, trees, and the landscape. This can manifest itself internally or externally in the form of patterns, designs, or metaphorical context—subtle-yet-enchanting similarities between the inner life of plants and trees and humans. What are humans if not plants and trees, themselves made-up of organic material?

They picked the beach equivalent of Times Square to mate and create a family....With their inner pluck and some close monitoring from committed volunteers, two federally endangered Great Lakes piping plovers succeeded against all odds. At Montrose Beach in summer 2019, the parents (Monty and Rose) raised two healthy chicks, Chicago’s first fledged pair since 1955.

Plover chick, we’re here on this city beach guarding you
dawn to dusk these peak days of summer, a ragtag flock
of giddy birders telling your story to passersby who
can’t get enough of you (we love their oohs and ahs).

This pewter remnant within a golden prairie,
this glacial legacy, this child of primeval rivers,
now become the River of Man, faithful
and fecund servant of the Illinois