Some days after work, instead of taking the bus directly from campus, I like to walk through the lush Pacific Spirit Park, a Vancouver Regional Park that encircles the University of British Columbia like a green moat. It helps me get out of my head, grounds me in the seasonal change of flora and fauna of the place in which I live, and fills my lungs with clean cool forest air.

Once I am out of earshot of traffic, I usually take a long trail that transects a section of gorgeous second-growth Douglas fir forest and eventually leads to a bus stop about three miles from my department office. This week, mushrooms are popping up like magic out of logs, the mossy ground, and standing trunks of dead alders. The rotting shells of old growth trees still haunt the woods, which, despite its history, feels as primeval a place as any I have ever encountered. It is a spiritual ecology for me, because it nurtures my connection to the Divine, the present moment, and the life on which I depend and with whom I share this planet. 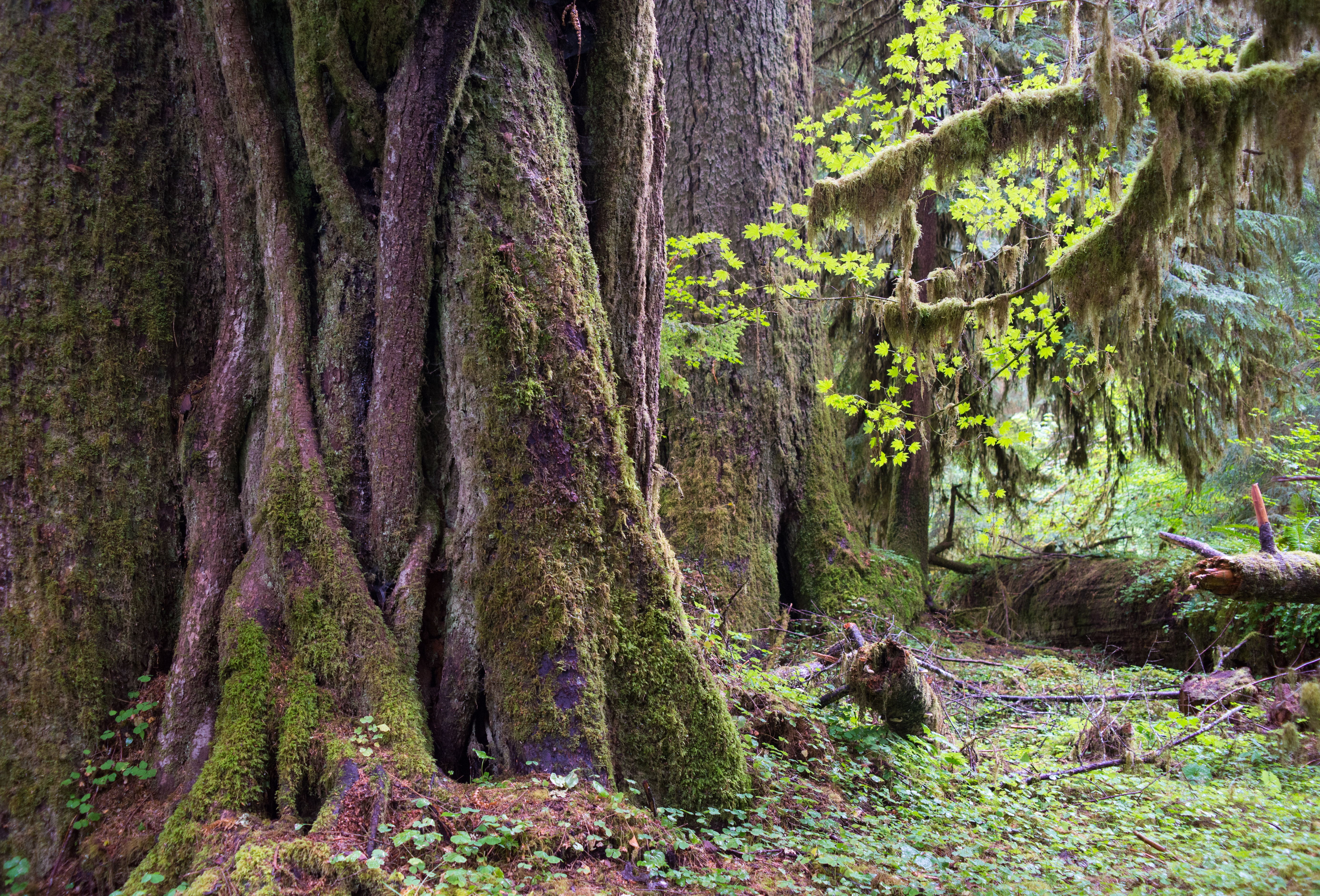 Recently, as the sun was setting, I moved slowly around a bend, not in a hurry, and stumbled on two Barred Owls (Strix varia) perched on low branches. We made eye contact, but they didn’t seem to mind me all that much. After a few minutes of silence, a small springer spaniel trotted down the path from the other direction. Nose to the ground, he caught the scent of something and bounded off the trail just below the owls, who stayed put but followed the dog with their eyes. Then, a squirrel, flushed by the spaniel, ran up the trunk of a nearby Douglas fir and stopped. The owls divided their glances between the energetic canine on the ground and the potential meal now stock-still on the side of the passive fir. In short order, the walker of the spaniel arrived, and I silently pointed to the owls. He stopped and admired them with me, and we exchanged a few words before he called his dog and continued.

According to wildlife biologist Kent Livezey, prior to the 1870s the Great Plains served as something of a barrier to Barred Owls, an eastern native. Native plains peoples’ burning practices, which kept the plains open and mostly free of trees, prevented the owl from expanding their range into the Pacific West. As European settlements were established and expanded in the 19th century, and Native peoples died from disease, were slaughtered, or were confined to reserves, fire suppression rather than fire promotion became the rule. European and other settlers also began planting more trees around homes, parks, and riparian areas, which increased canopy cover and acted as habitat corridors through which the Barred Owl could migrate. The owls then rapidly expanded their range into Alberta and Montana, and eventually to the entire Pacific West. They did not arrive in British Columbia until the 1940s and in some parts of California until the late 1970s. The rapid changes in tree cover to the Great Plains also allowed other birds to expand their ranges, including the ubiquitous American crow (Corvus brachyrhynchos) and the western kingbird (Tyrannus verticalis). 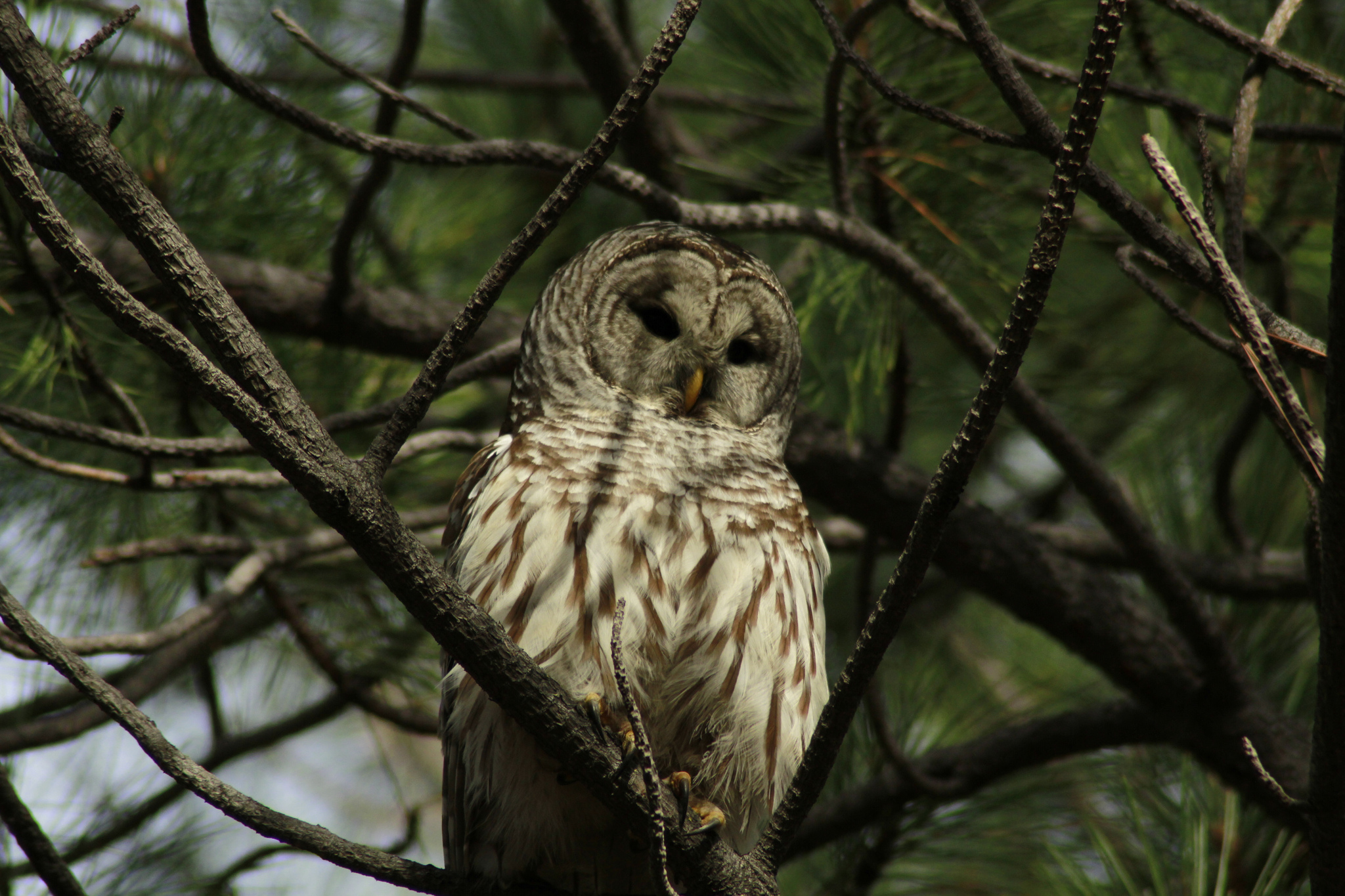 The two owls before me in Pacific Spirit Park, who now had a potential meal clinging to the bole of a tree, were no doubt descendants of this recent pioneer stock. Suddenly, one owl flew to a perch on the other side of the tree where the squirrel clung, while the other flushed the squirrel upward by landing on a branch just below it. They alternated, driving the squirrel higher and higher, until I could no longer see the trio through the foliage. I assume it did not end well for the squirrel. I continued on my way, grateful for an encounter that does not happen every day.

Many years ago, when I was living in Western Oregon for a sustainable living skills internship, a forest defense activist told me that they hated the Barred Owl because it was displacing the famed and threatened Spotted Owl (Strix occidentalis), which so many, including himself, had fought to protect from extinction. He seemed to think that the Barred Owl was a sinister invasive species, and because they arrived in this region courtesy of human alterations to the landscape, they had no place being here.

In the 1990s, however, during the peak of the “jobs vs. owls debate,” the dominant narrative was that the Spotted Owl was being driven to extinction by voracious logging companies that were cutting forests at unsustainable levels and harvesting what remained of the regions precious old growth forests. Old growth forests were characterized by these companies as stagnant in terms of annual growth increments of wood per acre. As forest defense activists argued, however, old growth forests were prime habitat for the Spotted Owl and many other sensitive species. The owl became the poster child of forest conservation activists, who were tired of clear cuts and plantations, and would do anything to stop yet another sacred grove from being razed to the ground.

The fight was quickly dualized into a battle between jobs and owls, and with the help of Al Gore, the owls eventually won. Viewed as a major victory for the environmental movement, the 1994 Northwest Forest Plan set aside some seven million acres of federal land as “late successional reserves (LSR)”—areas that either contained or would be managed to become old growth forest. Spotted Owls, forest advocates argued, prefer this type of habitat to nest and hunt in, and the idea was, if we protect old growth habitat, we will be protecting Spotted Owls.

Things didn’t quite work out this way. In the 2011 US Fish and Wildlife Spotted Owl Recovery Plan, the authors lamented that, despite their herculean effort to protect owl habitat, it was now clear that the Barred Owl, not logging companies, were the real threat to the Spotted Owl’s existence. Barred Owls outcompete, and in some cases prey on, the Spotted Owl. In habitats with both, Barred Owls were shown to be more aggressive and thus more effective hunters than the Spotted Owls, making it harder for them to reproduce in numbers that would remove their threatened species designation. An additional threat to Spotted Owl populations was also noted by the authors: in some cases, the two species were breeding to create a hybrid owl called the “sparred” owl.

The US Fish and Wildlife Service is now implementing a multi-year study that involves removing (shooting) Barred Owls from critical Spotted Owl habitat. The proposal stipulates shooting up to 4,500 owls at a cost of around $700 per owl and is already well on its way to achieving this goal. In a single year, this resulted in the death of thirty-six times more birds than have ever been killed by a conservation project in the history of the United States.

This issue raises some interesting ethical questions. Human beings are intervening to prevent a beautiful creature from going extinct. But is the scale of this slaughter justified? Are financial resources being wisely allocated? If protecting Spotted Owl habitat is not enough, will killing the Spotted Owls' competitor work? Are Barred Owls unnatural because they are recent arrivals?  What seems clear is that Barred Owls are better at catching food and outcompeting Spotted Owls. In their historical eastern range, Barred Owls nest in deciduous trees. In the west, however, the owls have adapted to nest in conifer trees as well. And, while Spotted Owls are rarely observed nesting in suburban areas, Barred Owls—though they do prefer closed canopy mature forests—have been observed nesting in buildings, creek banks, nesting boxes, platforms, under bridges, and even on the ground. Spotted Owls are solitary hunters who sit and wait to swoop on small mammals. Barred Owls tend to hunt in pairs, calling out to each other as they triangulate and locate their prey. Barred Owls are also generalists, known to eat a wider range of creatures, from earthworms to other birds and amphibians.

There is a genius to the Barred Owl that I respect. But, what about our beloved Spotted Owls? Certainly human beings have contributed to their demise, but where do we draw the line in conservation intervention projects? Walking through Pacific Spirit Park, what at first felt like a moment of communion with pristine nature was in fact an encounter with the wild, messy, complicated, dynamic, and fluid reality of all life on earth. The primary forest, which became established after the last Ice Age, was cleared of First Peoples and large carnivores in the 19th century. It was then clear-cut and allowed to recover, as part of the University of British Columbia’s Land Grant. Then it became a Regional Park, with graveled walking paths and interpretive signs. These walking paths brought a human, a dog, two owls, and a squirrel together into a single ephemeral dance. I was not an observer of a fragile, pristine nature, but an actor in an ever-evolving drama whose characters are as big as a supernova and small as quarks. I have sympathy for Spotted and Barred Owls alike. I want to see more old growth forests, not less. But something feels off about the mass murder of an owl that is just doing its part to live and thrive, even if at the expense of another owl species. Certainly my life is lived at the expense of a great many who came before me. Should I be culled, too?

Pacific Spirit Park is a spiritual ecology for me, it is a place that brings inner and outer landscapes together, it is a place where I encounter the Divine; but I have no illusions that it is sacred because it is pristine, separate, or untouched. Its history is unavoidably entangled with my own settler people and the indigenous peoples who have lived in this place for more than 10,000 years. It is sacred, not because I feel good when I walk there but because it allows me a flashing glimpse into the wild energies of the nonhuman world, energies that remind me that I too am wild in my core. To slaughter Barred Owls, it seems to me, somehow betrays this reality, a lessening of the tangled wild in favor of a preconceived, even if scientifically robust, version of human control.

Jason M. Brown, PhD, studied anthropology as an undergraduate. He has joint Master's degrees from Yale in forestry and theology. His PhD is in Resource, Environment and Sustainability from The Institute for Resources, Environment and Sustainability at the University of British Columbia. He is a Lecturer in Humanities and Resources and Environmental Management at Simon Fraser University in Vancouver British Columbia.