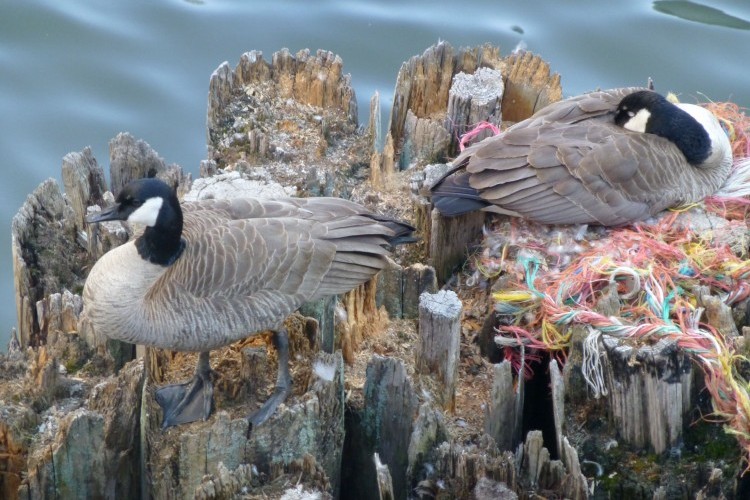 For years I’ve loved Canada geese for their beauty, endurance, and spirit of aspiration. They used to stop at our lake in Connecticut during their fall migration, and we’d feed them bread scraps from the dock. Once or twice I felt their sharp, precise bills pluck the food straight from my hands; my fingers tingled long afterwards from that quick, electric touch of wildness. Years later, after moving to Minnesota, I would wave as they passed overhead, honking encouragement in great ragged chevrons heading north. Later I would meet them paddling in the Boundary Waters, sleek and unruffled. They seemed to embody a pristine freedom along with a courage and perseverance honed by epic journeys.

Writers I knew and loved shared this admiration. Mary Oliver told how, in the midst of loneliness and despair, the world “calls to you like the wild geese, harsh and exciting.”  Aldo Leopold celebrated their “wild poem dropped from the murky skies” as a redemptive vision for a world haunted by ecological ruin and the human catastrophe of World War II. And in T.H. White’s The Once and Future King, wise Merlin turned Arthur into a goose as part of his education so that he could learn loyalty, love, and courage along with the wisdom and strength that leadership required.

Imagine, then, how surprised I was to find Canada geese wintering over in Cincinnati.  You can spot them paddling and feeding in any open water that doesn't freeze. They've colonized golf courses, parks, and cemeteries; they love effluent ponds around power plants; even the polluted creek that runs through our industrial zone holds some mysterious attraction. No one hunts them, and their predators are suppressed. They get lots to eat in our yards, lawns, and greenways, though the fertilizer they leave behind is seldom appreciated. In a word, they’ve become a nuisance. And with their new, prosperous city life, they no longer need remoteness. All this troubles my cherished iconic image of Canada geese. Their wildness feels tainted. How can they symbolize heroism and freedom?  I feel as if I have lost something. Is this just one more sign of “the end of nature”?

Perhaps. But it also shows how urban people like me can unthinkingly turn to wilderness, with its resident people and creatures, to validate certain romantic ideals. In his best-selling Arctic Dreams, for example, Barry Lopez celebrates the skill, knowledge, and perseverance that enable northern hunters to thrive in harsh, remote landscapes. He writes of one family who was marooned by shifting ice and survived for months after improvising tools and a boat. In effect, they recreated their entire material culture. Who among us could do that? Yet the anthropologist Richard Nelson, who lived in Arctic villages for years, also reports how one elder warned him never to travel anywhere without dental floss.

The uncomfortable fact is that urban environmentalists such as myself tend to like our savages noble, authentic, and uncorrupted, just as we like our wilderness to be pristine and wholly other. Of course, it’s hardly fair to expect others to satisfy our romantic notions. If an easier route presents itself, we take it, so why shouldn't they? We expend great efforts to customize our environment; why blame them for taking advantage? Perhaps we want the geese to be wild and noble because we so often lack these qualities in ourselves. We need something to admire, and if dental floss is enough to disturb our Arctic dreams, how much more so these well-fed urban geese? They’re no better than fallen celebrities; they’ve sold out to comfort and convenience. To Leopold, I suspect, their presence would be a scandal.

Maybe, however, it’s a mistake to keep looking to nature for comfort or salvation. Besides, in these days of globalization, climate change, cyborgs, and genetic engineering it’s getting harder and harder to decide what’s natural or even wild. People and animals everywhere have to live where they are and do the best they can. And in fact, this is how it must be in a sustainable world, where we’ll all need to get along. Hamlet may have instructed his players that the end of poetry is “to hold as ‘twere the mirror up to nature,” but in our time of global impact, it would be truer to say that nature holds the mirror up to us. Geese in the city bring us face to face with ourselves, with our ideas, beliefs, and desires, with our own troubled and conflict-ridden character. The question that they frame in all but words is: what sort of world do we want to live in?

*Ed. note — Be sure to read John's essay about urban areas as "landscapes of opportunity," which is his contribution to the Questions for a Resilient Future series.

These videos capture the dynamic conversations from the March 2016 Call of the Forest gathering in Point Reyes Station, California.  This daylong event explored the importance of reforestation and watershed restoration. Lawyers, conservationists, and religious leaders shared profound personal stories and spiritual connections with the natural world. This program was a collaboration with Black Mountain Circle, Point Reyes Books, and the US Forest Service.

Conversations around the Green Fire

Explore Conversations around the Green Fire, a video series capturing in-depth interviews with leading thinkers by interviewer Curt Meine, Aldo Leopold scholar and Center for Humans and Nature Senior Fellow.  This series builds on our Emmy award-winning documentary film Green Fire: Aldo Leopold and a Land Ethic for Our Time.

13:25
Identity, Birding, and South Carolina: A conversation with Drew Lanham on connecting identity,…

3:09
Identity and Water: A conversation with Drew Lanham connecting identity, place, and nature.

10:10
A Conversation on an American Water Ethic, with Dorene Day and Curt Meine. This interview was h…

8:40
A Conversation on an American Water Ethic, with Josephine Mandamin and Curt Meine. This intervi…

13:42
A Conversation on connecting identity, place, and nature with James Edward Mills and Curt Meine.

16:13
A Conversation on an American Water Ethic, with Jeremy Schmidt and Curt Meine. This interview was he…

12:39
The Importance of a Water Ethic, with Jane Elder, Cynthia Barnett, Dorene Day, and more. Interv…

Questions for a Resilient Future

Our speakers span diverse disciplines, points of view, and life experiences as they explore Questions for a Resilient Future. Connect with ideas from one of our contributors or watch a roundtable discussion.

21:57
What can evolution tell us about morality? Featuring Jeff Schloss and David Sloan Wilson. From the C…

18:32
How can zoos and aquariums foster cultures of care and conservation? Featuring Sylvia Earl…

19:14
How can zoos and aquariums foster cultures of care and conservation? Featuring Jeanne Gang.&nbs…

22:36
What are the connections between culture and conscience? Featuring Jonathan Haidt

19:22
What are the connections between culture and conscience? Featuring Mel Konner

56:23
Does hunting make us human? Theodore Roosevelt IV in conversation with Mary Zeiss Stange and Ja…

17:24
Mind and morality: where do they meet? Featuring Arthur Zajonc

18:46
Mind and morality: where do they meet? Featuring Michael McCullough

1:28:58
Mind and morality: where do they meet? On Being's Krista Tippett in conversation with Arthur Za…

14:58
How far should we go to bring back lost species?  Featuring Ben Minteer

17:26
How far should we go to bring back lost species? Featuring Harry Greene

24:33
How far should we go to bring back lost species? Center President, Brooke Hecht, in conversatio…

15:35
What does Earth ask of us? Featuring Kathleen Dean Moore

16:56
What does Earth ask of us? Featuring Robin Kimmerer

15:51
Can democracy in crisis deal with the climate crisis? Featuring Carol Gould

19:19
How is nature critical to a 21st century urban ethic? Featuring Julian Agyeman

25:26
Can democracy in crisis deal with the climate crisis? Featuring Benjamin Barber

17:56
How can we create a successful economy without continuous economic growth? Featuring Richard Howarth

11:46
How can we create a successful economy without continuous economic growth? Featuring Peter Vict…

38:57
How can we create a successful economy without continuous economic growth? Center President, Br…

13:28
What does it mean to be human? Featuring David Sloan Wilson

14:48
To build or not to build a road: how do we honor the landscape? Featuring Ingrid Leman Stefanovic

18:53
To build or not to build a road: how do we honor the landscape? Featuring Nina-Marie Lister

48:42
What does it mean to be human? and How can we honor the landscape? Roundtable discussion with Nina-M…

Green Fire: Aldo Leopold and a Land Ethic for Our Time

Enjoy these video bonus features and film trailer from our Emmy award-winning documentary film Green Fire: Aldo Leopold and a Land Ethic for Our Time, which explores the roots of Leopold's land ethic and the relevance of the land ethic today. This film was co-produced by the Center for Humans and Nature, the Aldo Leopold Foundation, and the US Forest Service.

15:34
Voices of Green Fire with Will Allen, Wes Jackson, Michael Howard, and more...

13:29
Watch the extended 'Green Fire: Aldo Leopold and a Land Ethic for our Time' documentary trailer.