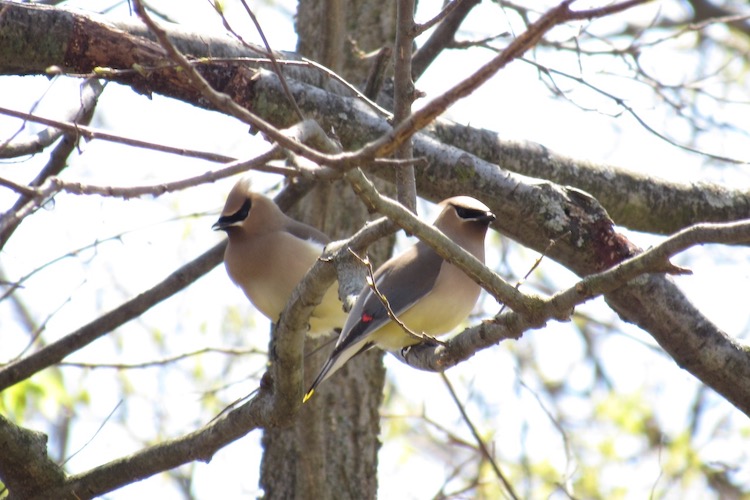 Through white, translucent blossoms, my gaze is drawn toward a flutter of motion. Cedar waxwings. Flitting through branches, plucking budding flowers, here to forage on fecundity. Birds follow light, moving across continents as the earth tilts back to sun, ingesting the magical transformation of edible green, crimson berry, clear nectar. They remember better than we this alchemy worthy of faith.

Cedar waxwing bodies contain bold mixtures from the sun’s palette, brushstroke-feathers refracting saturated colors. The robes they wear are a flagrant injustice to the little grey birds (LGBs) who must drably go about their business. If the LGBs are the company men and women, waxwings are the artists—painted in oiled golds, dabbed with shocking blood orange and crisp cadmium yellow, hiding their eyes behind black masquerade disguises. Their hunger and chatter is soft and constant, a steady whistle, almost too high for the human ear. They congregate in droves to sample what the light offers, bowing their heads among cathedral branches. 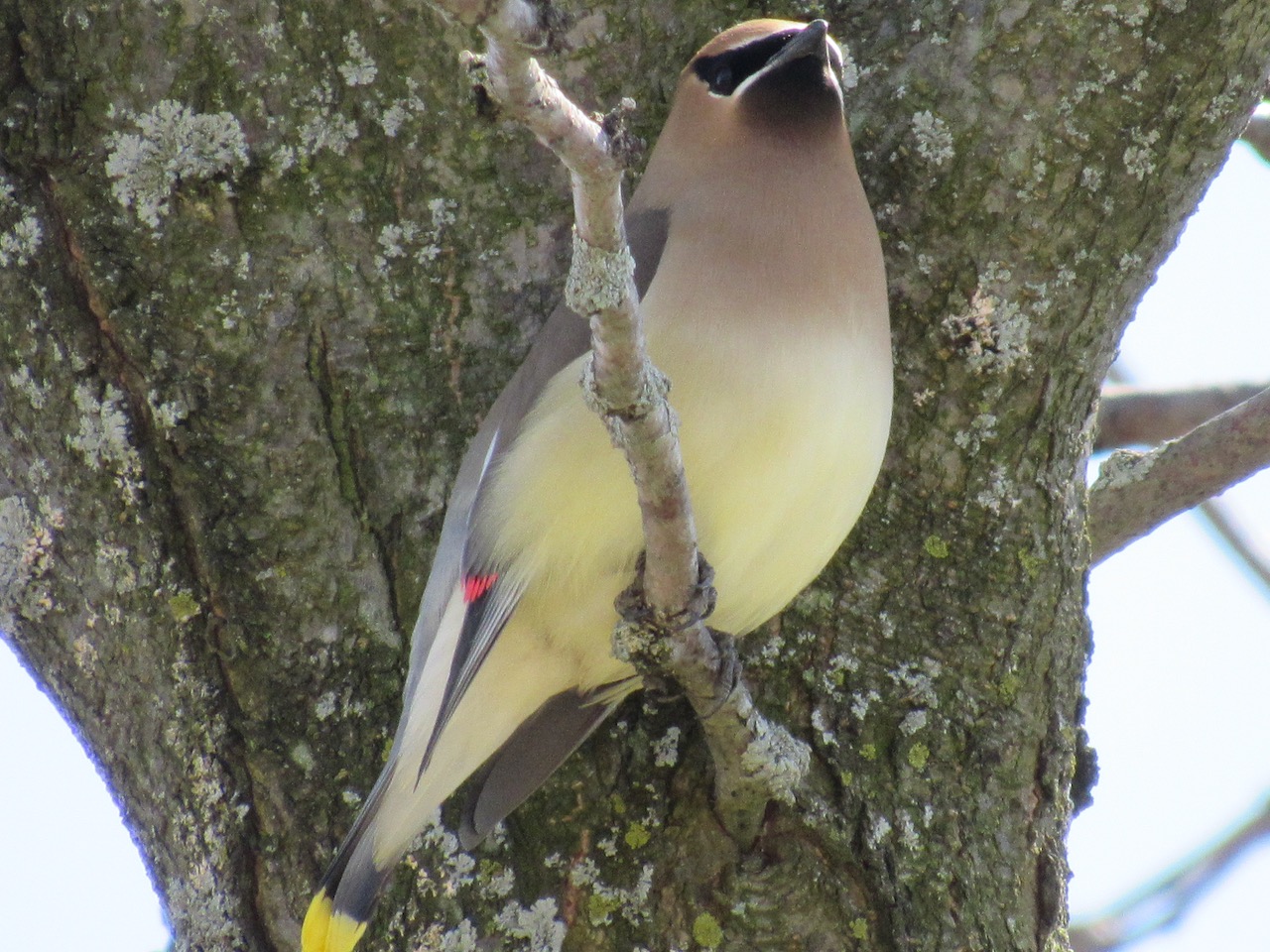 Here they renew acquaintances: mutual relations stretching back to when birdsong was the lingua franca of earth, an unconstrained echo of light in song. A waxwing trill can mark a place, alerting significant others to who’s around. At other times, the sound seems to express pure joy in the moment. Such songs, it could be claimed, are a welling-up of emotion, an inward expression needing an outlet, and it’s pleasing to think about the way in which a body amplifies inner feelings, creating a chamber and a reed in the throat, using the gifted air to make melody, sending music back into a world that began solely with the roar of crashing waves and tossing wind.

Was it the song of waxwings that drew me on that day twenty years ago? I’ll get to this in a moment.

In her book, The Enchanted Life, folklorist and psychologist Sharon Blackie writes, “In a state of awe, we feel humbled. In a state of wonder, we feel possible.” Even though I suspect awe and wonder frequently go hand-in-hand, I appreciate this distinction. Awe produces an inward turn, heightening awareness of the small self, our stunning insignificance within the swirl of larger forces. 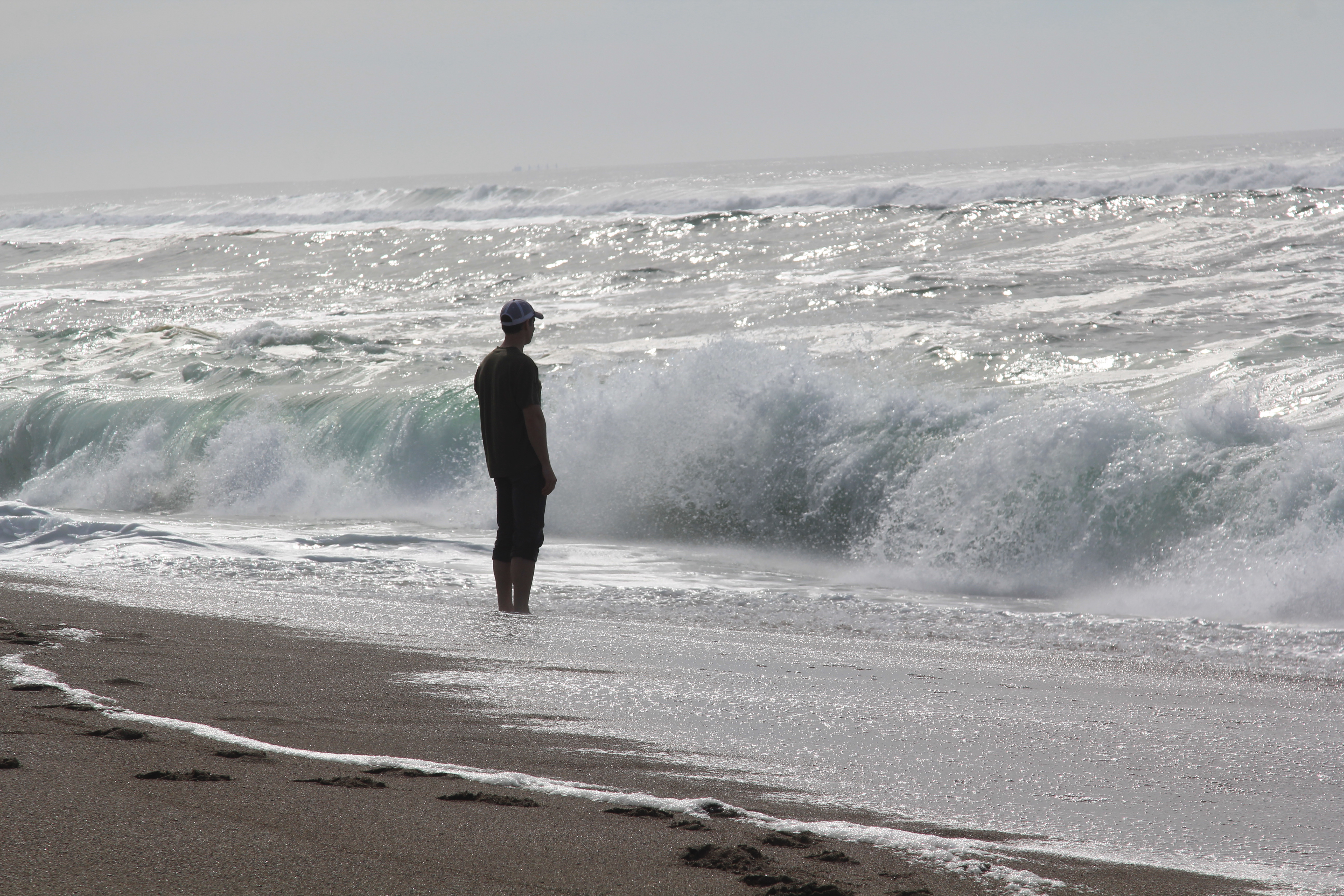 Recently, in awe of thunderous waves crashing against the Pacific coast, I was drawn like a moth to flame, or, more accurately, like a dunce to riptide, and ran headlong into the mighty ocean. When I pointed my body back toward shore, I felt a sensation, a distinct pull against my limbs—as though a tractor beam from the Starship Enterprise had fixed its ray to my body. I thrashed vigorously to gain forward momentum, yet drifted ineluctably backward against my will. Fortunately, the safety of shore was near. The next set of waves came quick, and I buried my legs and arms in their embrace, churning myself toward less liquefied ground. When I emerged from the grasp of the ocean—sodden, adrenaline firing—I fell to my knees with tingling fear and overwhelming gratitude coursing through my limbs. I spread my arms out to my sides, raised my hands, and tilted my chin toward the sky, flooded with awe and heightened knowledge of the small self.

In contrast, wonder takes us the other direction, experienced as a sometimes rapid expansion into the big Self.

A lot of my practice in recent years has revolved around coming to know the wonders of small things. Most times, perhaps all times, wonders surround us; it’s only a matter of adjusting our perception, opening our senses, tuning into their presence. These experiences occur on city streets, or in the garden or the backyard; they are epiphanies of the everyday. Maybe they add up; maybe there’s a cumulative effect. But wonder can also come on sudden.

I’ve had three epiphanic moments in my life. Maybe there have been more—I believe every day holds countless opportunities for mini-epiphanies, from the shimmy of a leaf to the buzz of a bee to the whispering of wind to toes in the soil—but there are three moments in my life that struck me with such a sense of overwhelm that they have become benchmarks. These were experiences that shook my whole being, instances in which my sense of self simply melted away, like butter in a hot pan. That’s not quite right. My sense of self did dissolve, but it loosened into something else—something much, much larger. Perhaps a better metaphor is water evaporating into air. In any case, one of these moments happened when I was living in Gainesville, Florida, studying to get my doctorate. It features waxwings. I’ve never put this story on paper before. It seems the time has come.

I was walking, on my way to pick up a few items at a convenience store. A perfectly urban scene sprawled before me: a busy intersection, cars rumbling up and down the pavement, people taking loudly. Each street corner hosted a tree. I don’t remember what kind. I might not have been able to name them back then. At that stage of life, my attentiveness to the natural world was strong but not especially fine-grained. Yet one particular tree caught my eye. Or was it the song in the air—an unfamiliar, tinny whistling? I stopped and allowed my gaze to linger. Then, I saw: the tree was writhing. 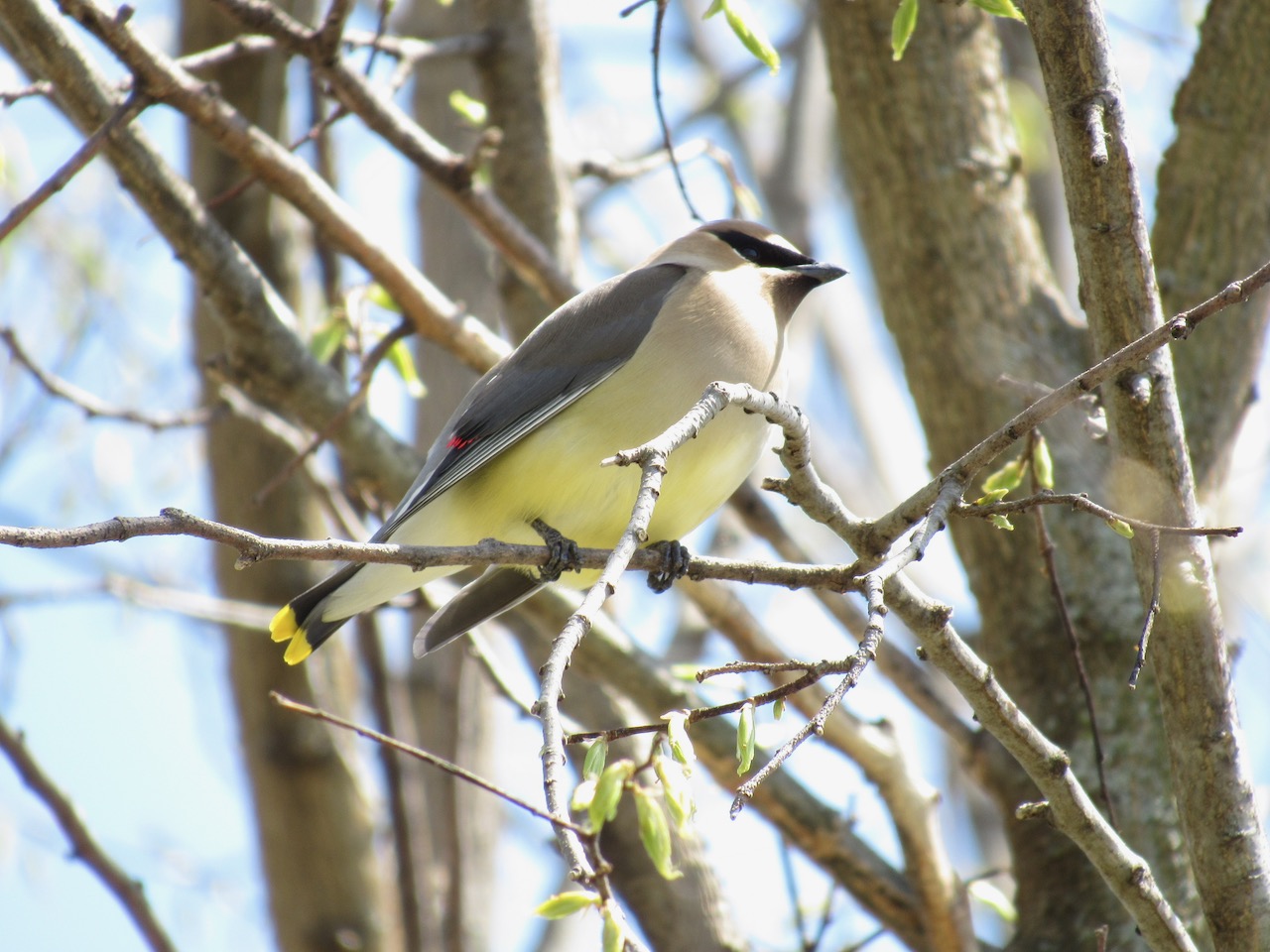 Branches and leaves shimmered and trembled, imbued with some kind of atomic force. The leaves weren’t simply stirring in a strong breeze. No, the air around me was still. The motion seemed internal— instead of something outside influencing the tree, it seemed as though energy was emanating out of the tree. I was riveted.

I stared at this glistening, vibrating tree for—I’m not sure, five seconds, twenty seconds, a minute?—and then…the tree exploded.

A flock of cedar waxwings burst into the sky, turning and shifting and sweeping in unison through the clear winter air. I’d never seen anything like it. A murmuration. I was transfixed. I may have gone slack-jawed, my chin dropping toward my chest. The birds rose above the street, banking and angling as if they were one body, one being, swooping and circling, as though a river of light had been given wings. They climbed up, up, up, and then plummeted, dive-bombing the earth. And as gently as a child tucked under the covers at night, they slipped into the branches of another tree on the opposite side of the street. And that tree, still as a stone moments before, now itself began to writhe with waxwings.

I’ll let that moment be what it is rather than try to analyze why it moved me so peculiarly. Though I will say this: it was as if awe had been knocked into me. Like I just happened to look up, for no reason at all, on my way to a convenience store, trundling along the pavement, and glimpsed LIFE: in its raw vitality, carried on the wings of hundreds of birds. I was familiar with Edmund Burke’s essay about the sublime; I knew of Rudolf Otto’s explication of the numinous as mysterium tremendum et fascinans. I never felt threatened by the birds as one might when, say, crossing paths with a grizzly bear. And yet, I was confronted by a power that, for a few moments at least, shredded my sense of self.

Now that I live in northeastern Illinois, I see waxwings frequently. They are “common” year-round residents here. If I do see them, and have my camera with me, I rarely fail to take a picture. Beauty of that kind creates compulsive photographic behavior. But I’ve never seen them in such numbers as I did that moment in Florida. Never again seen them set a tree aflame.

I now notice waxwings more than I would otherwise because of that experience. I notice a lot of birds now that I wouldn’t have otherwise because of that experience. The waxwings opened wider a portal I was already walking toward. Or maybe they shrank me down to size so that I could slip down the rabbit hole of wonder. The world hasn’t looked the same since. And it just keeps opening up, wonder upon wonder. 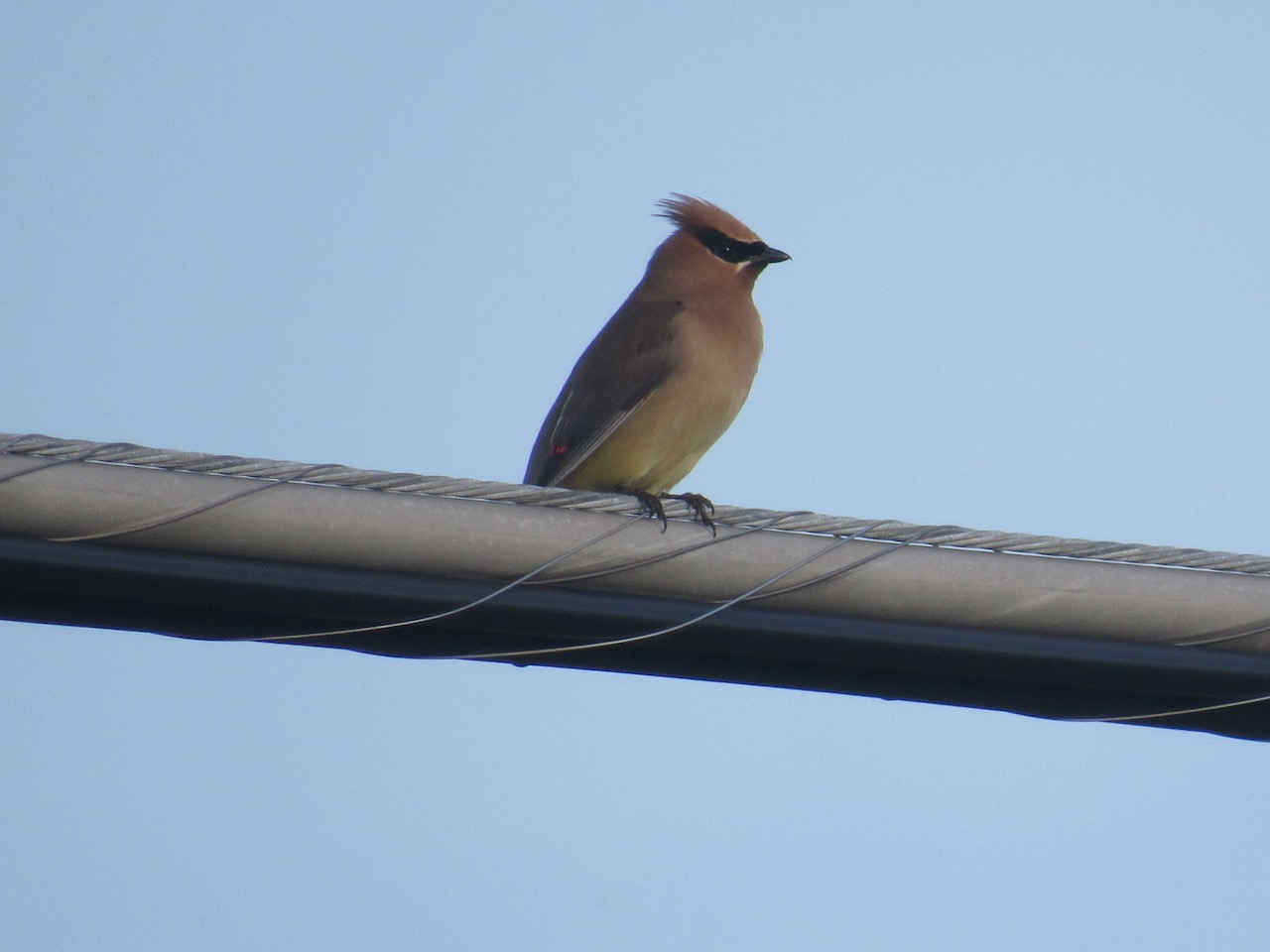 I want others to have this experience, but no amount of desire will make that possible. Your experience will be yours, in your time, in your way. I suppose the best we can do in our lives is act as a finger pointing to the Moon, as the old Buddhist adage puts it. We can’t be the Moon, and we can’t force others to experience the Moon. We can only point.

Zen practitioner Stephanie Kaza remarks on much the same phenomenon when she notes in her book, Conversations with Trees, “Awe is a non-transferrable experience.” We can’t shake our experience into somebody else. Or hand it over as we would a couple of bucks. We can only share honestly and hope others find their way to stand in awe of the Moon, or Earth, or waxwings on a city street. To feel a state of wonder: to feel possible.

Note: This essay is cross-posted in the inaugural issue of Everyone Quarterly. The editor of that issue (themed "Animals") is Joseph Young, a City Creatures Blog contributor. We encourage you to check them out!