In late 2016, I attended government-to-government meetings in Rapid City, South Dakota, between several Plains Tribal Government representatives and US Federal Government officials. I listened to a tribal elder testify that her young grandson was hospitalized with an E. coli infection caused by hydraulic fracturing water contamination in her community in Oklahoma. Hydraulic fracturing, she said, had created fractures in land already polluted with agricultural waste, and those fractures allowed the waste to permeate into her community’s drinking water supplies. In Oklahoma, this is not an isolated case of human health injury from compromised water security due to the extraction industry.

I attended the meetings on invitation from tribal elders I met at Standing Rock the month before. I am a geographer with expertise in water security. Prior to visiting Standing Rock, and alarmed by the conflict happening in North Dakota, I assembled a volunteer team of academics to assess threats from the Dakota Access Pipeline (DAPL) to the Missouri River Basin water resources. Our multidisciplinary team brought together backgrounds in geography, hydrogeology, water law, demography, geographic information sciences (GIS), oil-spill modeling, and pipeline safety. We found that the construction of DAPL, and the fracked oil it is designed to carry across six states, poses a salient threat to downstream tribes—communities that are already considered economically high-risk population. We brought this assessment to the Tribes. The indigenous water protectors said “water is life,” and what my team found in our assessment is that water security is paramount to energy security. 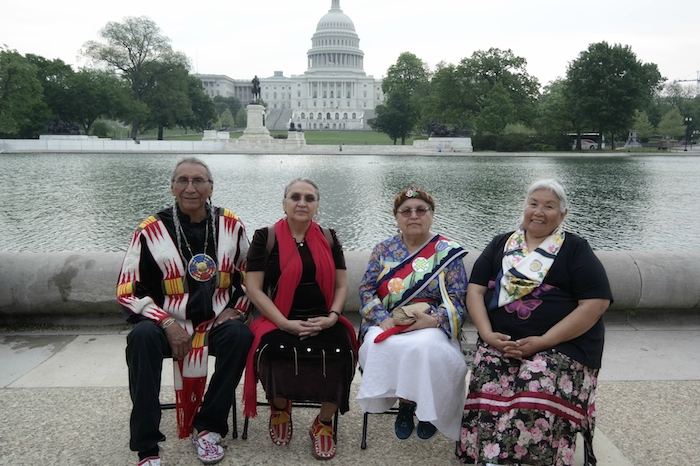 Energy sources are interchangeable and replaceable, but there is no replacement for water. While fracking propelled the US oil and gas industry to lead the world in production and export under the Obama administration, the costs to human health and welfare are still mounting. Meanwhile, the heightened possibility of earthquakes, subsidence, collapsing aquifers, and contaminating groundwater present further threats from fracking to water security. In the case of DAPL, running hazardous material across agriculturally productive American lands and waterways is another clear threat. Less quantifiable is the threat from the undisclosed, unmonitored, and unregulated contents of fracking fluids, protected under the so-called Halliburton Loophole. The Halliburton Loophole is a provision in the 2005 US Energy Act that exempts disclosure of hydrofracking fluids from the US Safe Drinking Water Act by claiming the fluids are patented.

Secure water resources, in my line of work, are a basic human right. Therefore hydrofracking, as it is currently regulated and practiced in the United States, is a clear violation of human rights. Water security is a concept defined differently depending on the country, type of water resource, and context. In the case of US hydrofracking, whether the act of fracking or the transportation of fracked material,  water security involves human health, environmental health, and community access to safe water. While we have existing legislation to ensure water security in the US Safe Drinking Water Act (SDWA), US National Environmental Protection Act (NEPA), and the US Clean Water Act, these legislations have been rendered impotent by short-sighted modification for industry exceptions and exemptions to act in violation of the very reasons these acts were promulgated. These US federal modifications are prioritizing energy independence over water security and food security as a matter of national security. When it comes to shared water resources, securitizing an issue in this manner removes power and agency from all stakeholders except for the national government, and in a democracy this is a recipe for resource conflict.

One of the most prominent exemptions is Nation Wide Permit 12 (NWP12). DAPL was authorized in part—in violation of the aforementioned legislation as well as tribal treaty rights—using NWP12. NWP12 was administered through the Department of Defense under the Obama administration to expedite infrastructural development of oil and gas industry pipelines in the interests of national security for energy independence. Using NWP12, federal interests can prioritize energy security vis-à-vis the oil and gas industry by assessing megaprojects like the 1,174 miles of DAPL using only impacts of the hazardous material in 1,000-foot segments. In geography, when a question is scaled up or down to yield a desired result, we call this masking. When focusing on the big scale, local impacts may be masked; and when focusing on the small scale, cumulative impacts may be masked.

Water as an inherent human right was affirmed in 2010 under the United Nations Resolution 64/292, and while there is no express right to water security in the United States, the US Safe Drinking Water Act of 1974 ensures national drinking water standards and the US Clean Water Act of 1972 regulates point-source pollution entering our water systems, drinking or otherwise.[1] The US population has been lulled into a false sense of security about their water by the existence of federal policies that are bypassed or are unenforced in favor of industry. Post-9/11, the United States Federal Government prioritized energy security as national security given the geopolitics of oil. This overshadows attention to water and food security. Energy, water, and food are commonly referred to as “the nexus” in DC, but it is erroneous to consider them to be equally important. Water is possible without food or energy, but we cannot produce energy or food without water.

The patenting of fracking fluids, the exemptions to the federal regulations, the defunding of water regulating and monitoring bodies, and the shifting of regulation of oil and gas to industry self-regulation has resulted in gross negligence and human and water casualties. This is particularly glaring in the Bakken, the geologic area in North Dakota where DAPL originates. Here, the longer-term economic burden of human and environmental violations falls ultimately to the taxpayer, not the corporation. Simultaneously, according to the US Department of Energy, in 2008 the US surpassed Saudi Arabia in oil and gas production and by 2012, the US became the world leader surpassing Russia and maintains the highest global production levels today.[2] But there is a price for this domination in the oil and gas industry on our people, land, and water.

Federal loopholes for fracking that directly impact water security are highlighted by the controversy at Standing Rock. Exempting the pipeline from NEPA allowed for construction without a comprehensive scientific assessment of impact (an Environmental Impact Statement, or EIS) of the entire project—just localized assessments were made. Any megaproject transporting hazardous waste across land and water, like this pipeline, requires a full EIS. The Tribes called for and were granted requirement of a full EIS in November 2016 by the US Army Corps of Engineers only to have this overturned by the Trump administration in January 2017. The case is still tied up in the courts while fracked oil runs through the pipeline. 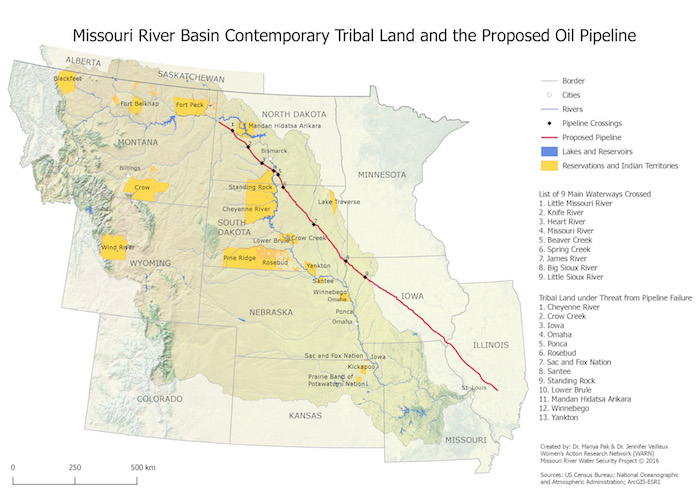 Water is connected with cultural rights and identity, food security, economics, politics, and our environment and critical ecosystems. And yet, in the United States of America we do not have a Department of Water. We do not have a National Water Commission. No one body oversees the water resources of our country as a total system. We relegate water resources management to states, utilities, corporations, private interests, and more than thirty different federal agencies. Similarly, the fracking industry is largely unregulated. While there is a federal agency that oversees natural gas infrastructure, there is no one agency that manages oil infrastructure. Water and oil are essential ingredients for the United States in maintaining its position of power on the global stage, yet there is no accountability for the caretaking of either water or oil. This lack of regulation coupled with a national security plan focused entirely upon securing a domestic supply of energy through fossil fuel production will continue to compromise the American people’s quality of life, health, and welfare—essentially, our human security.

The conflict is clear. The industry is extracting in an unregulated and unsafe manner. Common citizens now do not know if they can trust their water supply, and they do not have clear pathways to those in power to get their questions answered or to change their level of risk and exposure. That alone is causing a destabilization of people’s sense of security. Treaties are being violated. There is little to no corporate accountability. These conflicts are not just a matter of concern for human rights and water security in this present moment, they are destabilizing the sustainability of our way of life, or put in the words of the Tribes: this is a concern for generations to come. This includes real security issues related to earthquakes and subsidence caused by unregulated fracking activity along with cancer-clusters and E. coli outbreaks related to contaminated water supplies. Additionally, there are security concerns regarding the loss of viable land and water due to leaks and spills, and land and water loss due to salinization cannot be reversed.

The story of hydrofracking threats to human rights is inextricably tied to water security and water rights. Water rights are human rights. Secure, abundant water is a fundamental aspect of our way of life in the United States. The active violation of water and environmental protections are adding to the already myriad challenges that water managers face due to climate change, which impacts precipitation and storage in snowpack, local corruption, increasing demand, and poorly executed and aging infrastructure. Without safe, secure water resources, our country will no longer enjoy food security, essentially food self-sufficiency. And while we can boast energy independence, I am not at all convinced of the value of this trade-off.

Although President Trump signed for the allowance of continued drilling and commissioning of the DAPL, recent federal court decisions in favor of the Tribes have called the environmental impact of the pipeline into question. The conflict is not resolved.

I am grateful for and would like to acknowledge the tireless work of indigenous tribal leadership, particularly Chief Arvol Looking Horse, Paula Horne, Faith Spotted Eagle, Casey Camp, Judith LeBlanc, and Sharon Day for addressing these critical matters to safeguard their own homelands as well as access to safe and secure waters and lands for the rest of mother nature and the people of the United States. I would also like to acknowledge the team of professionals who worked on the Missouri River Water Security analysis.

Map: Approximate route of the Dakota Access Pipeline—a 1174-mile pipeline built to transport fracked oil from the Bakken region of North Dakota to processing at one of several refineries in the Midwest or the Gulf of Mexico. Map from the Women's Action Research Network (WARN), courtesy of the Jennifer Veilleux.

Jennifer Veilleux is a geographer focused on the water security of international rivers. In addition to scholarship, Veilleux uses maps, infographics, photography, and satellite imagery through social media to highlight spatial relationships of environmental justice and human rights issues as relates to water.