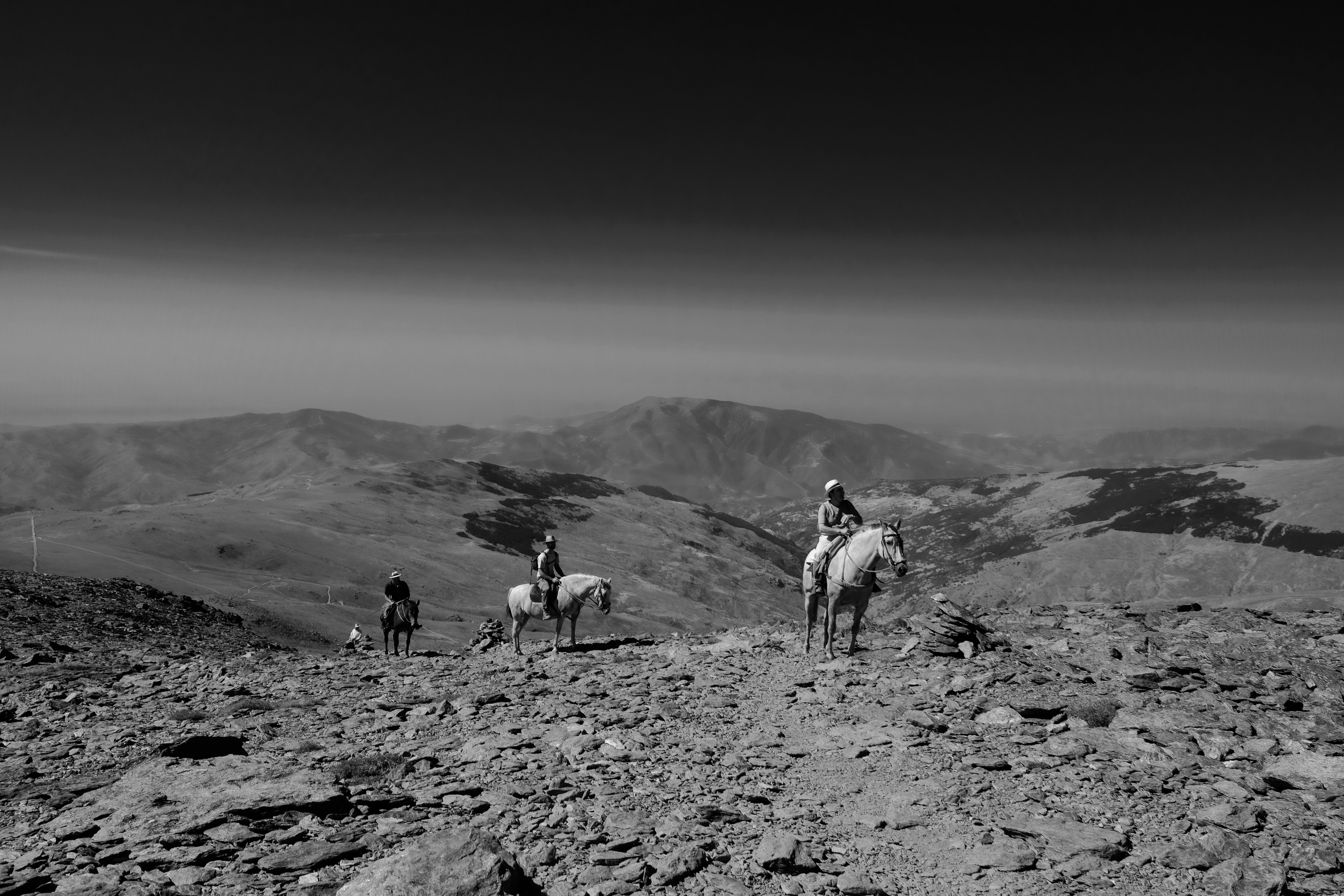 “Things are themselves only as they belong to something more than themselves: I to we, we to earth, earth to planets and stars, countless stars more themselves mirrored in the eye and leaving room to spare for whatever occurs next.” —David Hinton

The Sierra Nevada is a dramatic and rugged mountain range that extends across the southern region of Spain. At 3,486 meters, Mulhacén is the highest mountain on the mainland. The protected area encompasses terrain with torrential rivers, sheer-sided gorges, stony scree slopes, glacial lakes between snowy summits, and, in the foothills of the Alpujarras, cultivated terraces of almond trees and vegetables. The Poqueira River cuts through the Barranco de Poqueira gorge.

Whitewashed villages tumble down terraced valleys of the Alpujarras. The highest of the three villages in the Barranco de Poqueira, at 1,436 meters, is Capileira.

From the bellied dark, sun glazes the ridge to the east, named Angel’s Peak. Just before 8 a.m., morning light meets the mountain. We shift into radiance. The arc of day begins. Dawn on the mountain speaks the language of wing, grace wing, sun-struck and luminous. Angels speak. 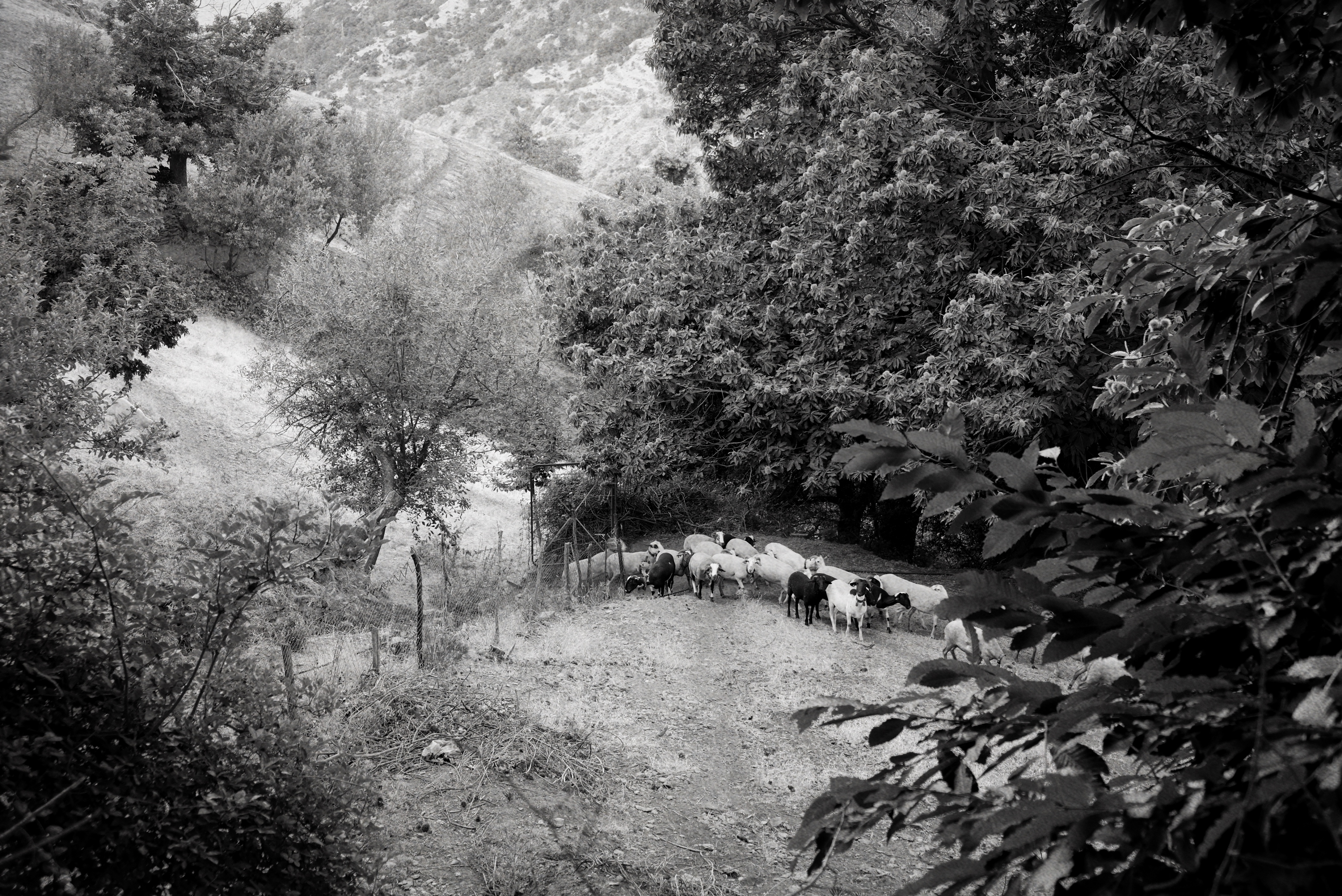 The distant sound of goats’ bells rises from the valley below.

Sheep, once scattered like marbles in a child’s game, begin to move across the hillside as one body. Antonio’s voice rises from the southern sloping field, an invitation crossing a border into another world. His drawn out call, hee-yup, followed by a terse whistle signals his two dogs. Sheep and goats align neatly into formation before spilling down the hillside once again. These cues form part of a herding language passed on through generations.

As the goats and sheep reorient, the sound of bells permeates the silence. Wooden toggles meet the bell’s inner cave—bright tings to deep low tongs. The language of morning. 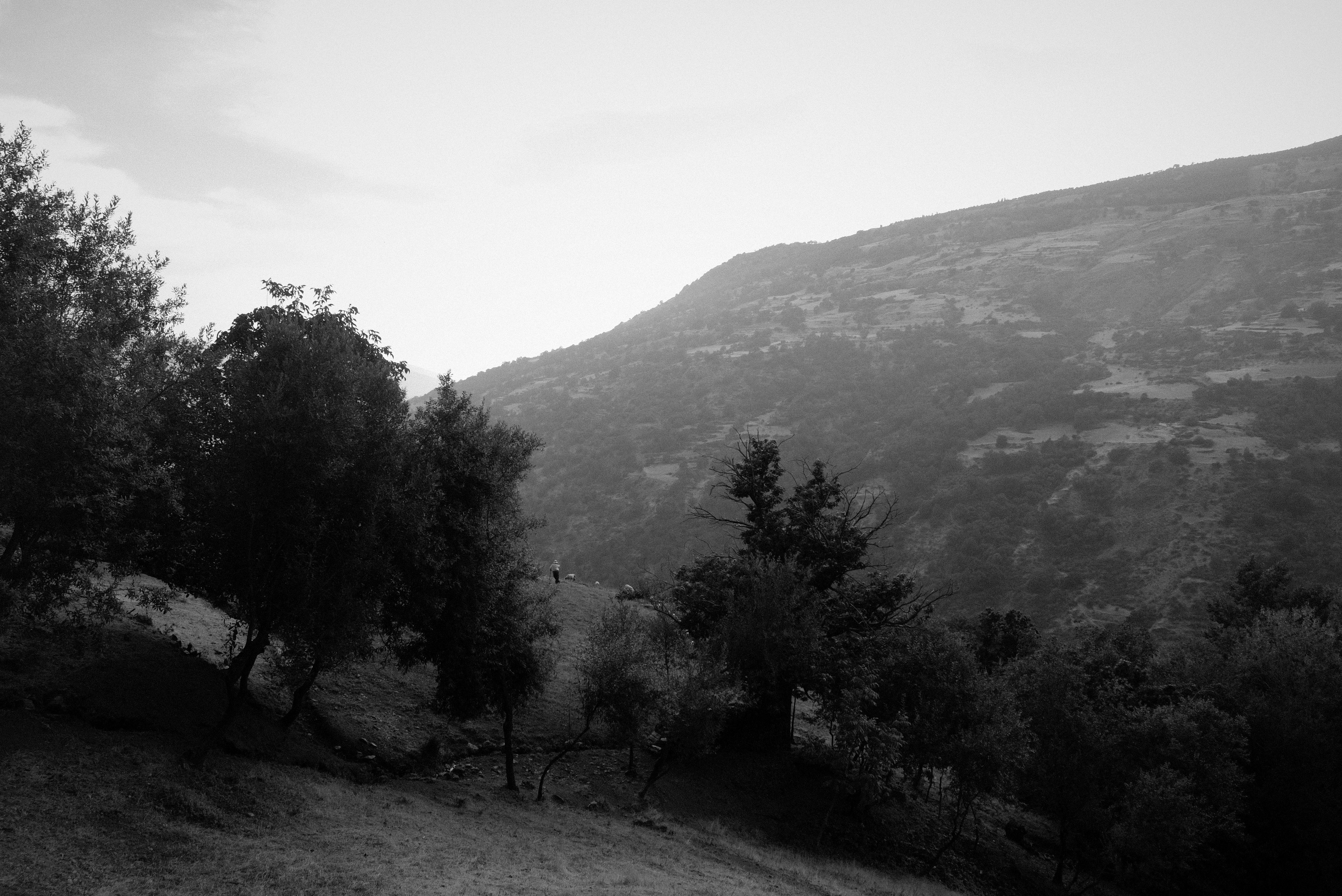 Antonio stands poised, leaning on his staff, a hand-carved, slender walking stick. His dark silhouette punctuates the rolling terraced landscape. It is as if the world pauses as Antonio gazes across the valley while goats and sheep graze the hillside. Purple flowering alfalfa, sprays of golden esparto, waves of avena and oat grass give description to the land. In this moment it is as if nothing has changed for the past two hundred years. Yet it has, and dramatically so. For the number of folks in service to land is now few. The terracing remains though the surrounding wild landscape reasserts itself.

At sixty-five, Antonio has been tending this terrain for six decades, since he was a boy. He was born in this valley and has traveled only as a herder with his goats and sheep to pastures south on the hills above the coastal region along the Mediterranean—a three-day journey on mule.

“Put your hands into the mire. They will learn the kinship of the shaped and the unshapen, the living and the dead.” —Wendell Berry 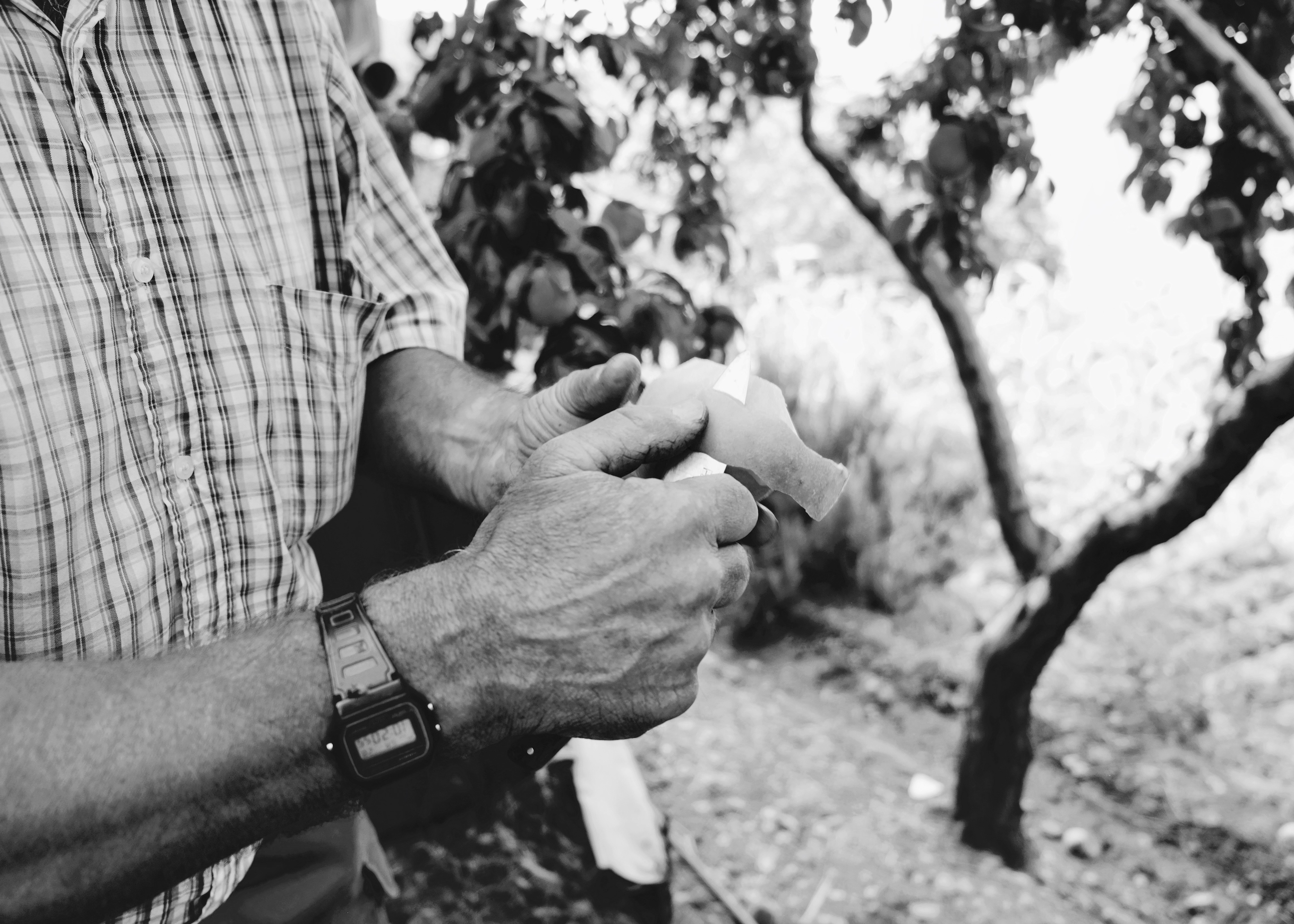 Antonio in recent years has shifted his tasks from herder to farmer. His days are filled with working a modest family farm. Last spring, he sold his horse Lucero, and his thirteen-year-old son was heartbroken. His flock, once five hundred goats and sheep, has dwindled to a mere fifty. Perhaps this is enough to maintain one’s skills and ties to the land, one’s connection to the “old ways.” Antonio tells me that he wouldn’t trade his life for any other and smiles wryly about the cell phone his wife insists he carry. His relationship to the land is paramount. He suggests he would feel a loss of dignity if he had to spend life in the village.

“Traditional knowledge is rooted in intimacy with a local landscape where the land itself is the teacher.” —Robin Wall Kimmerer 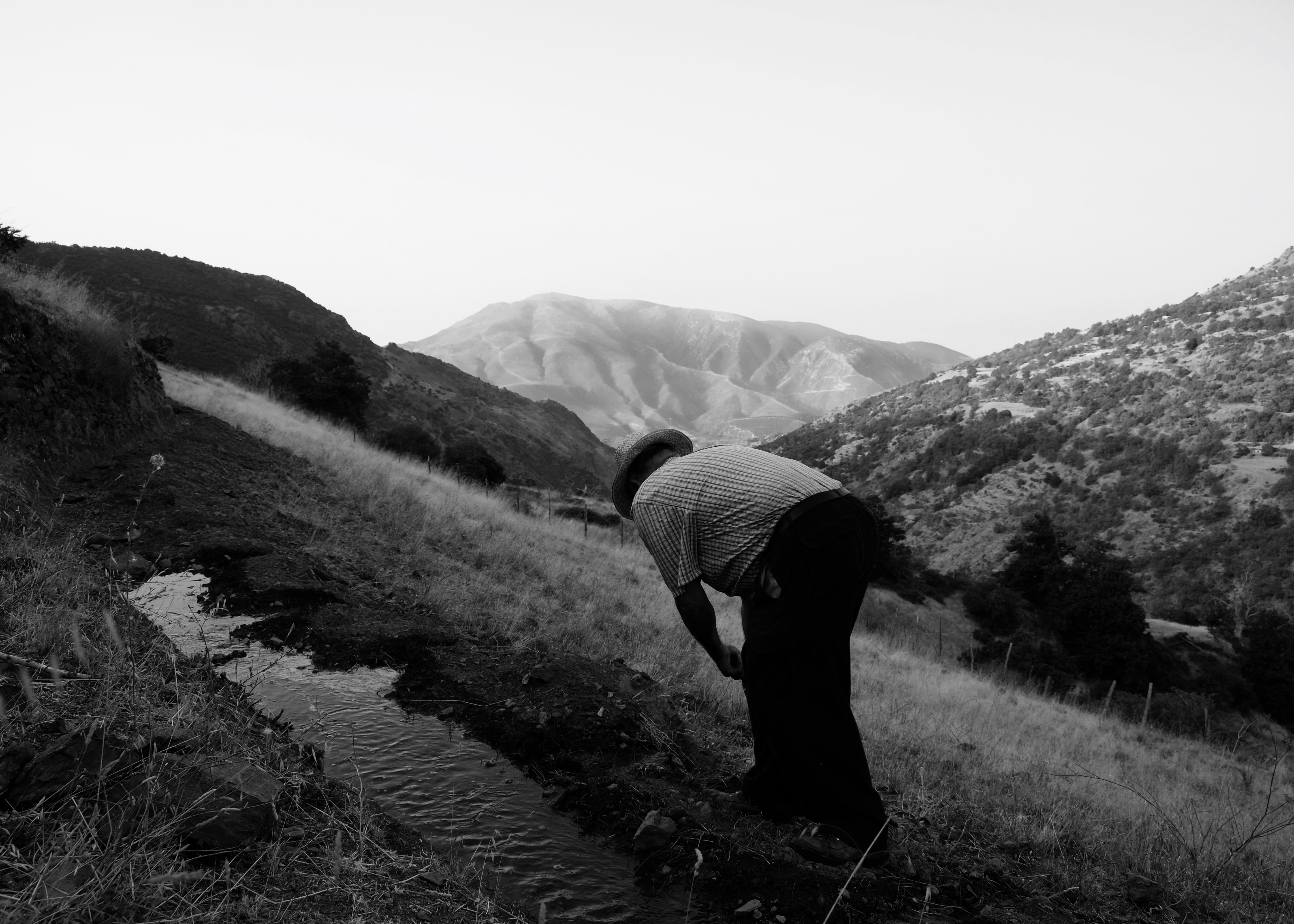 Man bending over a stream.

On Sundays, Antonio heads out of the village well before daybreak to manage the acequias, irrigation channels that run across his field. He bends over the earth with a spade-like tool to realign some of the stones so that the waters spill onto the fields where his animals will graze. Today they are on the adjacent field below one of two eras—stone-threshing floors. He lifts a large flat stone; water suddenly rushes through the channel. Tributaries send mountain water down the hillside.

From the northwestern edge of the village, a wide cobbled path leads out to Mount Mulhacén. It is only a few days past the summer solstice, and snows gleam bright in the morning sun on the upper peaks of Mulhacén, as well as on its sister mountain, Veleta. Paths narrow and wind either down to the Poqueira River at Puente Abuchite or up to a broad shaded field where Juan takes his goats out to pasture. Juan, like Antonio, is of this land. Born to the mountains seventy-six years ago, Juan knows the mind of the winds and intimately understands the seasons and bird migrations. He holds in his head a detailed map of these mountains, his knowledge of the land vast. His skills are sharp. Juan can look across the barranco and spot the movement of a fox, the glint of sun on the fox’s eye giving it away. 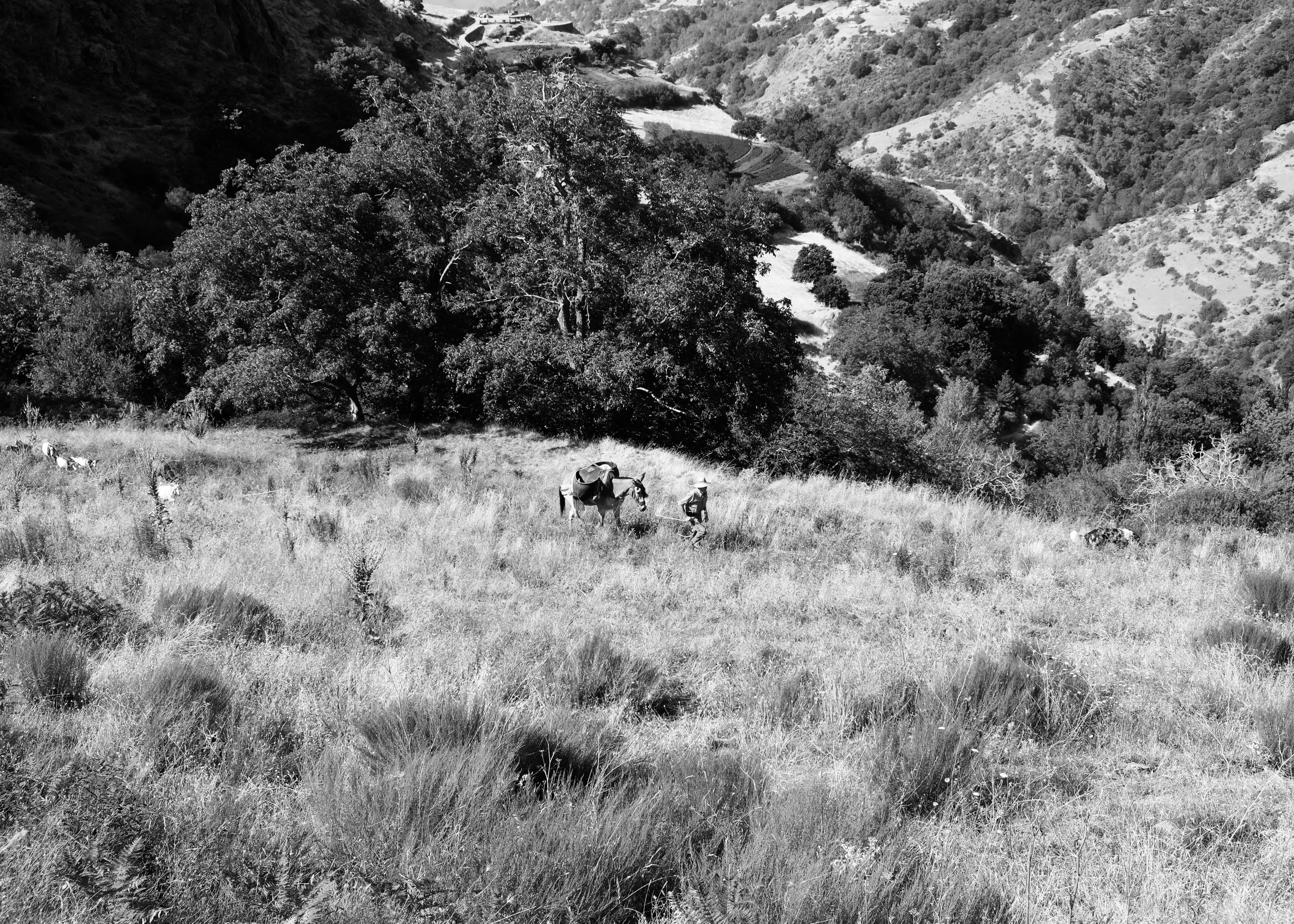 Acequias were introduced by the Moors and still serve the people of this region today.

His mule, handsomely outfitted with saddle and traditional hand-stitched blanket with red embroidered trim, is tethered to the slender trunk of a tree. Juan’s scythe leans against a plastic woven feed bag. Wooden tool handles, well-worn and preserved with the oil from his hands, fan outward. One of his goats stands on two legs, nibbling on the foliage of a neighboring bush. 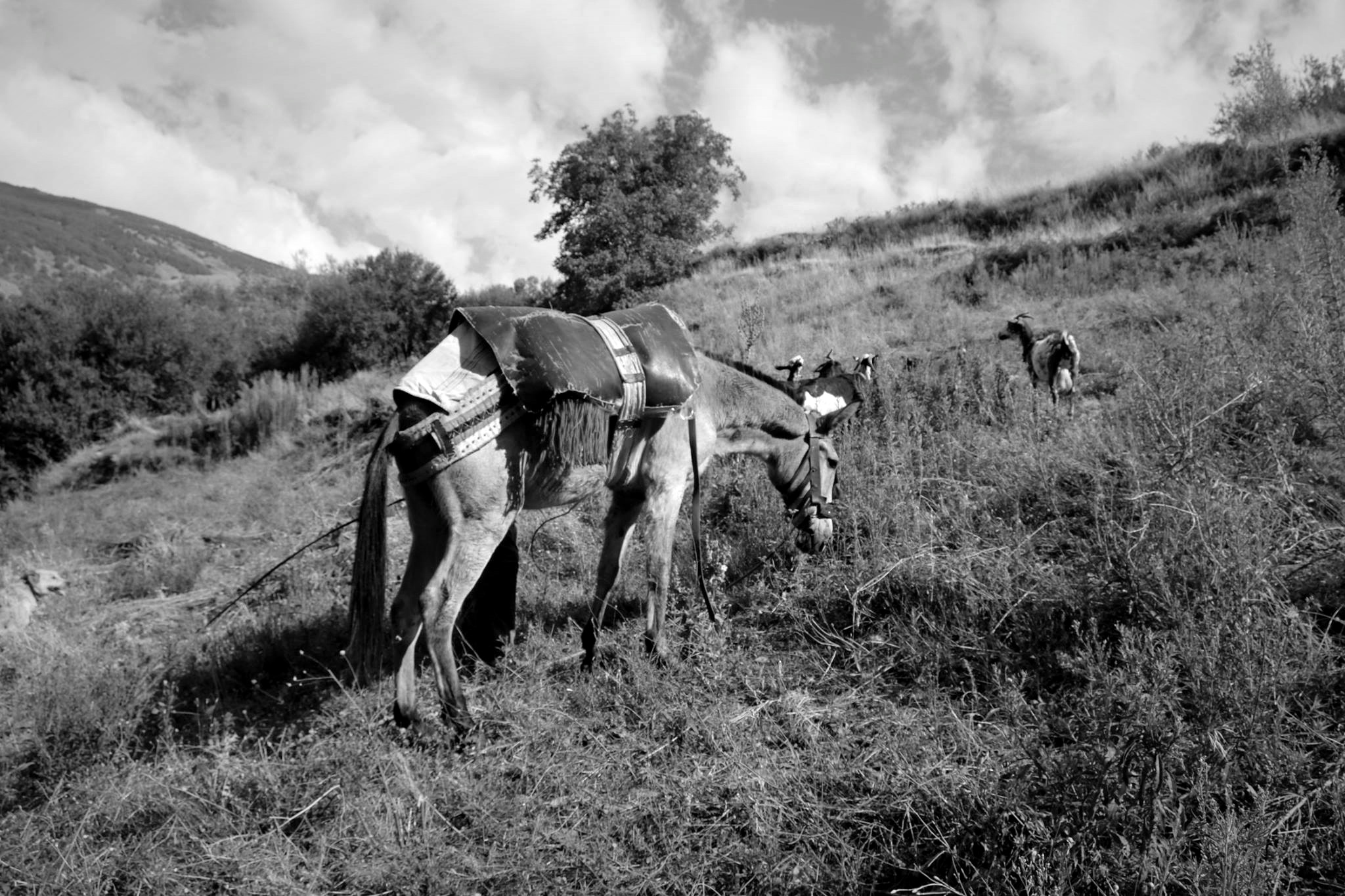 Animal with pack on back.

Juan takes a break from clearing the field overgrown with grasses and motions for me to sit. I know that means I am welcome. Mostly I listen. I open to the act of receiving stories of the land, of this life and the lives of his ancestors. As a non-native speaker, one must relax into listening. I quit translating, stop trying to decode. Language is about receptivity. It moves like water. Don’t try to grab, just be. Juan’s voice and the knowledge he shares are without sentiment.

Language does not always follow a linear trajectory to create story. Like nature unfolding, there is depth as well as a layering of spontaneous arising.

A sense of timelessness envelops this space of elderberry, thistle, and sprays of yellow wildflowers, Spanish broom. The sun is now high in the sky. I am aware that these rural ways of life are on the edge of extinction. I don’t believe Juan has successors. Without a deep connection to the land through the work we do, can we experience intimately a sense of place? Can we know belonging and kinship? Can we know ourselves? 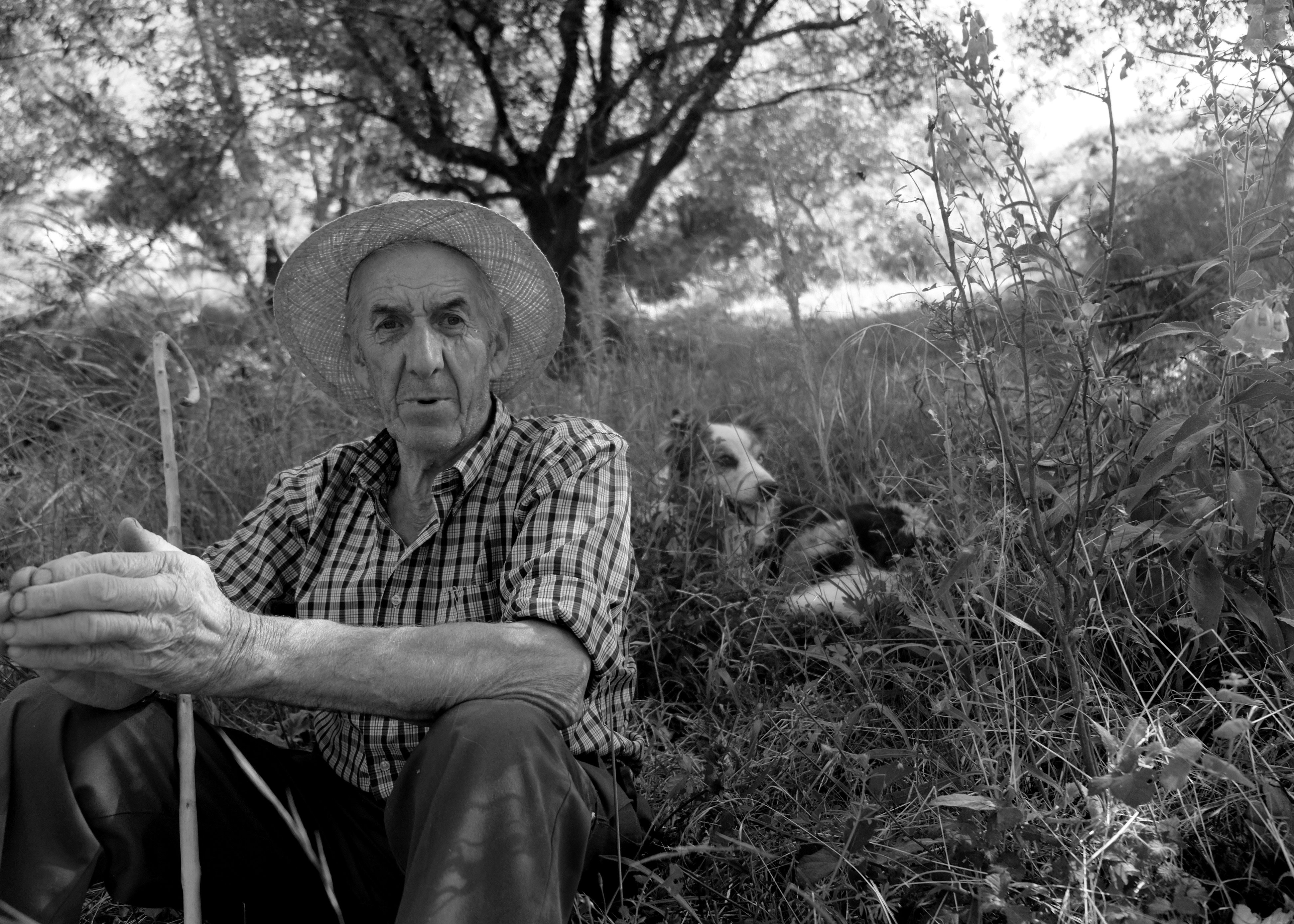 As I make my way home on the dusty narrow path, the mountains, too, are walking. Readiness to accept uncertainty has been the way for millions of ages. Mount Lújar rising in the distance has taken on a blue hue, as if saturated with the sky. Earth is generative. I look down, over my right shoulder, upon a circle of oaks. What the stones hold, the Earth remembers. 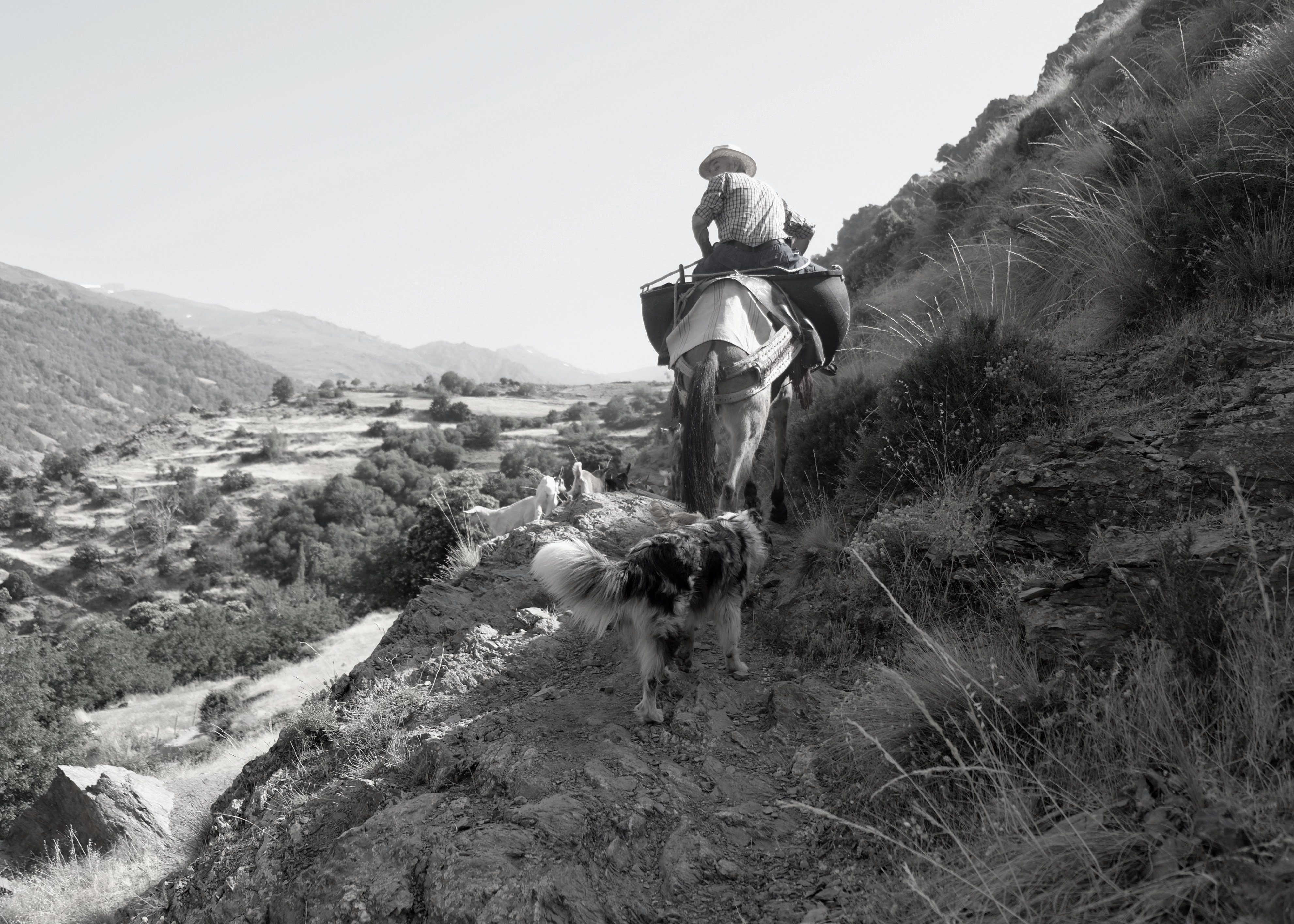 “Talk of mysteries! —Think of our life in nature, —daily to be shown matter, to come in contact with it, —rocks, trees, wind on our cheeks! the solid earth! the actual world! the common sense! Contact! Contact!” —Henry David Thoreau

Christine Morro is a writer and visual artist in relationship with our precious Earth. She has learned to listen deeply and gained the knowledge that silence accords. She lives and works on the east end of Long Island, NY and the Sierra Nevada Mountains of Spain.