In an interview with the philosopher Simon Blackburn about morality from an evolutionary perspective, I asked him to begin by defining morality without reference to the e-word, as he might on the first day of a Philosophy 101 class.[1] Here is what he said:

I think at its simplest it’s a system whereby we put pressure on ourselves and others to conform to certain kinds of behavior. That’s the side of morality that is perhaps most obviously associated with rules, with boundaries to conduct, with limiting criminal behavior when the rules are transgressed. On top of that, there’s an element of morality that is concerned more with our sentiments and emotions, for example with sympathy and our capacity to feel sympathy at others’ distress and a corresponding motivation to do something about it. So there are two sides to morality, one more coercive and the second more gentle and humane.

I love this passage because it describes exactly what morality is expected to look like from an evolutionary perspective: Morality is a set of adaptations that enables individuals to function well in groups. It has a genuinely other-oriented side that moves us to help others without being forced, but it also has a coercive side that punishes us when we don’t. This might seem like a contradiction, but it makes perfect sense when we realize that for cooperation to succeed as a social strategy in a Darwinian world, it must often be reinforced by punishment. The coercive side of morality makes it safe to be genuinely altruistic, knowing that one’s efforts on behalf of others will not be exploited.

Evolutionary theory also explains our moral failures, including our temptation to benefit ourselves at the expense of others and the ease with which we confine our morality to “us” and withhold it from “them.” Fortunately, the boundary between us and them is impressively flexible. No one could have imagined ten thousand years ago that us might refer to groups of many millions of people identified by abstract symbols such as flags.[2] This means that there is hope for expanding the moral circle still further to include all people on Earth and for the wise stewardship of the Earth to become a cardinal moral virtue of this global citizenry.

But is this Whole Earth Morality an impossible dream? I believe that it is possible and that evolutionary theory can help us get there. My confidence is based on ten years of experience applying evolutionary theory to the solution of real-world problems as president and co-founder of the Evolution Institute.[3] The first step is to clarify values and strengthen moral communities at the scale of small groups. Then the groups must become moral agents in the assembly of larger multigroup societies, all the way up to the whole Earth.

Even though we are genetically adapted to cooperate in small groups, not all small groups in modern life function well. An extensive scientific literature affirms what all of us know on the basis of common experience: No matter what the specific goal of a given group—such as a business group trying to maximize its profits, a school trying to improve educational outcomes, or a conservation club trying to clean up a river—in their ability to carry out their goals, groups vary from abject failure to stunning success.

The political scientist Elinor Ostrom demonstrated this fact for groups that attempt to manage common-pool resources such as forests, pastures, fisheries, and irrigation systems.[4] Common-pool resources are vulnerable to overexploitation, since each member has an incentive to utilize more than his or her fair share. This vulnerability was famously dubbed “The Tragedy of the Commons” by the ecologist Garrett Hardin over a half-century ago.[5]

According to orthodox economic wisdom, the only way to avoid the tragedy of the commons is to privatize the resource (if possible) or impose top-down regulation. Not only did Ostrom show that some groups could manage their common-pool resources on their own, but she identified eight Core Design Principles (CDPs) that were the active ingredients of group success. This achievement was so novel against the background of received economic wisdom that she was awarded the Nobel Prize in Economics in 2009. 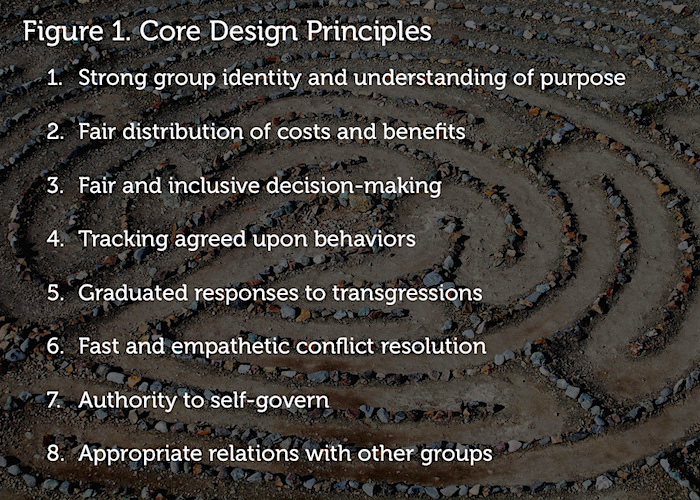 The eight CDPs are shown in figure 1. In a nutshell, they define the group and its purpose (CDP1), regulate interactions and suppress disruptive self-serving behaviors within the group (CDP2–6), and regulate appropriate relations with other groups (CDP7–8). Just as Blackburn’s description of morality makes great sense from an evolutionary perspective, so also do Ostrom’s CDPs.[6] In a highly meaningful sense, every group in modern life is an evolutionary system, where change takes place through the selection of behavioral options rather than genes. In groups that are unprotected by the CDPs, it is easy for disruptive, self-serving behaviors to gain the advantage. In groups that are well protected by the CDPs, the best option is to be a team player. Groups that implement the CDPs succeed for the same reasons that we evolved by genetic evolution to be such a highly cooperative species in the first place.

Knowing this, it should be possible to predict the success of any small group requiring cooperation—a neighborhood, a school, a business—as Ostrom did for common-pool resource groups. In addition, it should be possible to use the CDPs as a functional blueprint for improving the efficacy of groups, as the Evolution Institute is starting to do with its PROSOCIAL initiative. The opportunities for improving the quality of life at the scale of small groups are vast, even before we start thinking about society at a larger scale.

Groups can have many purposes, including some that are harmful to other groups or to long-term sustainability. To achieve a Whole Earth Morality, it is necessary for small groups to adopt the welfare of the whole Earth as their cardinal moral virtue and to organize their own activities accordingly. Intentional communities afford some impressive examples, although they too vary in their implementation of the CDPs and, therefore, their efficacy.[7]

Dancing Rabbit, an ecovillage in rural Missouri, provides an exemplar of a small group that has successfully adopted a Whole Earth Morality.[8] Members sign a covenant that strictly regulates ecological practices along with social practices such as non-violent conflict resolution and financial and time commitments to the community. These strict norms are not seen as oppressive because they align with the moral values of group members. Moreover, for those who abide by the covenant, every other form of diversity is tolerated and even celebrated—any religious or spiritual belief (including none), any sexual orientation, any living arrangement. This combination of strictness and tolerance makes for a high level of satisfaction and sense of meaning in life at the individual level and a high degree of efficacy at the group level. Dancing Rabbit members have an ecological footprint that is approximately 10 percent of the average American’s.

Just as a multicellular organism is composed of cells organized into tissues and organ systems, a large-scale society that practices a Whole Earth Morality (ultimately, the whole earth) must be composed of cells like Dancing Rabbit. The cells need not be rural ecovillages. They can exist anywhere in the world, they can have a diversity of purposes, and individuals can participate in numerous groups. The important thing is for every group to be mindful that they are contributing to a Whole Earth Morality and to organize their own affairs to achieve a high degree of efficacy. Here again, Elinor Ostrom and her colleagues led the way by developing the concept of polycentric governance, which notes that life consists of many spheres of activity, with each sphere having an optimal scale. Good governance requires identifying the optimal scale for each sphere and appropriately coordinating among the spheres.[9] Once stated, this seems self-evident. Yet, most large-scale societies are not organized in this way.

A lot of work will be required to convert the Earth into a superorganism regulated by a Whole Earth Morality, but we should all look forward to joining the effort for three reasons. First, creating and participating in small groups governed by a Whole Earth Morality will be an immensely rewarding experience for us as individuals. Second, groups made strong by the CDPs will be far more efficacious at establishing the Whole Earth Morality at larger scales than our current efforts as individuals. Third, we have a strong theoretical framework to guide us. Please contact me through the PROSOCIAL website if you wish to become a fellow traveler.

[3] The Evolution Institute. Retrieved from https://evolution-institute.org/

David Sloan Wilson is SUNY Distinguished Professor of Biology and Anthropology at Binghamton University. He is widely known for his fundamental contributions to evolutionary science and for explaining evolution to the general public.

What's Love Got to Do with Evolution? Featuring Jeff Schloss and David Sloan Wilson

20 minutes
What does it mean to be human?

David Sloan Wilson shares insights from evolutionary biology into what it means to be human.