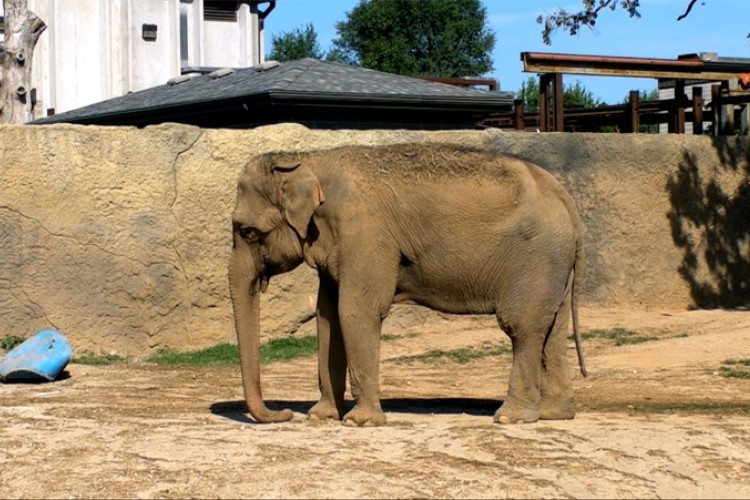 Could the act of looking at animals be part of a larger search for connection with something beyond ourselves, beyond our humanness—an attempt to connect with the mystery that nature inspires, even when this experience is heavily mediated? Why do so many people want to look at animals? Why do we defend or implicitly support the practice of looking? What does it mean to participate as a spectator of animals?

Such questions inspired me to create Thirty Times A Minute, a video project about elephants in captivity. Since 2009, I have traveled to over half of the seventy-five zoos in the United States that keep elephants, recording video of elephants who exhibit what biologists refer to as stereotypic behavior, which is also known as “weaving.” Only captive elephants exhibit weaving, which includes rhythmic rocking, swaying, swinging the trunk, head-bobbing, stepping back and forth, or pacing. These compulsive, repetitive movements cause debilitating, life-threatening damage to the animals’ feet and joints. My journey to document these behaviors eventually led me beyond zoos, and I have begun to film at circuses and fairs where elephants perform.

The project title references the heart rate of an elephant. I have been told that some circus owners claim elephants must sway because they doze while standing, and the swaying is in keeping with their heartbeat. This is wholly untrue. A more credible explanation is that these elephants are exhibiting neurosis due to lack of adequate mental stimulation. Elephants in the wild walk up to 50 miles a day. To me, the rocking represents a “wish-walk”—a way to soothe the distress associated with standing in an enclosure all day, often alone or with only one or two companions. In Thirty Times a Minute, the durational video of elephants exhibiting repetitive movements—in living environments that nearly replicate one another—are made from stationary viewpoints, and when viewed en masse, provide a larger study in unified, rhythmic movement.

Over the course of my travels, I have asked many zookeepers and elephant handlers about stereotypic behavior. Owners of performing elephants simply dismiss it—they do not want to talk about it. One of them told me, “The elephants are like children… She (the weaving elephant) is waiting for her turn to give rides. She’s jealous; she just wants to do whatever the other elephant is doing.” At the Houston Zoo, I was told the rocking enhances circulation. Many zoos work hard to maintain an image that animals are thriving, and I frequently witnessed employees make excuses to zoo patrons for elephants’ abnormal behavior. I mentioned to a Houston zookeeper that biologist Joyce Poole (whose work I was reading at the time) never saw any stereotypic behavior while observing wild elephants, yet the zookeeper insisted it was a natural behavior. Poole is worth quoting more fully on this topic:

As a scientist who has studied elephant behaviour and communication among free-living individuals for 30 years, I am stunned that the AZA is not able to perceive the empirical evidence that elephants need much more space than what is currently allotted to them. In the form of routine problems captive elephant managers face every day, the evidence is unmistakable: foot diseases, arthritis, weight related diseases, infertility, heightened aggression, and other neurotic behavior. In the Amboseli population where the life histories of over 2,000 free-ranging individuals have been followed for 34 years, wild elephants do not develop foot problems (zero cases); they are not seen swaying rhythmically back and forth (zero incidents in over 34,000 sightings of groups containing 1-550 elephants); they do not have difficulties conceiving (two cases of infertility out of 558 females over 10 years old); they do not kill their own infants (zero cases out > 1500 births); they do not attack and kill the individuals with whom they are bonded (zero cases; unlike captive elephants who injure and kill their keepers). All these zero cases in the wild add up to an enormous amount of evidence that elephants need space to be elephants.

At the PAWS Sanctuary for retired/rescued elephants in San Andreas, California, director Ed Stewart told me elephants arrive at the sanctuary exhibiting stereotypic behavior. "Nothing will stop it,” he said. “If you were locked up, you’d do the same thing. It'll drive you nuts watching them all day."

Many zoos have adopted strategies of enrichment to combat stereotypic behaviors in their animals. Hiding food to encourage some foraging or the use of toys and activities to keep elephants occupied are becoming standard practice in more progressive zoos (at least those with the staff and budget to do so). In Stereotypic Animal Behaviour, Canadian biologists Georgia Mason and Jeffrey Rushen weigh the benefits of environmental enrichment:

Perhaps an adequate summary would be that enrichment is necessary but not sufficient to combat stereotypy.

While stereotypy is a central theme of the video installation, the heart of my project is about unraveling deeply embedded cultural practices, exploring how spectacle functions, and examining the hypnotic role of nostalgia. I consider how the animal entertainment industry takes advantage of not only the animals but, financially and emotionally, the employees and the ticket-buying spectators. I am particularly interested in the complexity surrounding people’s desire to see and/or ride elephants, despite the awkward or even torturous conditions it creates for elephants. Common to all these topics is the seductive impulse to connect with these magnificent creatures, to brush against their power or step into some sort of fairy tale.

I am also interested in the notion of animal collection as a form of colonial obsession, and how zoos represent vestiges of such thinking. The historical roots of zoos can be traced to animal menageries, which were collections that served as a means for their owners to flaunt their wealth and power. The project’s multiplicity, in form and content, mirrors the endless and obsessive state of the animals’ behavior, as well as the human obsession to collect/possess the exotic at any price.

My first exhibition of this video was at EXPO Chicago 2013, as part of a larger installation, and last spring, the video was installed at The Screening Room in Miami in a highly controlled and immersive space. After seeing the interest and emotionally charged responses of viewers who attended those installations, I felt compelled to install this work in urban, public spaces.

Starting this November, Thirty Times A Minute will be projected onto the brick walls of buildings in busy areas around Chicago, rotating to different sites over a four-month period. For one week in each location, after sunset, the nine-minute video will loop continuously.*

I am thinking a lot about habitat with these installations; the un-natural habitat and behavior of the elephants will be injected into urban areas, magnifying the impossibility of humane captivity. Also, I am thinking about ways we city dwellers might, like elephants in confined spaces, be out of our “natural habitat.”

Through the observation of stereotypic behaviors in elephants, I am impelled to ask: In what ways do humans, along with all living beings, seek soothing and connectivity? Can ritualistic behaviors be viewed as a means of escape from present reality, and do forms of escape potentially—or inevitably—become debilitating distortions? I hope the video installation will prompt similar questions for viewers.

Many of the elephants filmed for my video project are now dead, and several zoos have closed their elephant exhibits. The elephants’ fates speak to the often-tragic ends of captive elephants. Patience, an elephant in Springfield, Missouri, for example, aggressively killed her experienced, 62-year-old zookeeper last year. The week prior, Patience's companion elephant was euthanized at the zoo. There was very little press about Patience killing her keeper, which is typical of how visitors are frequently shielded from behind-the-scenes realities. Another elephant that I filmed at Seattle's Woodland Park Zoo was recently euthanized for “unknown reasons.” The reasons seem clear to me: she collapsed after years and years of rocking back and forth in a confined space. There has been an immense, though unsuccessful, campaign to move the elephants in Seattle to sanctuary.

Zoo advocates emphasize education as an integral part of the mission of a zoo. I would argue, however, that if spectators are seeing a preponderance of abnormal animal behaviors, the result is miseducation. Moreover, money is often misspent. Ten million dollars recently went toward constructing an elephant exhibit at the Audubon Zoo, which allows spectators to hose off the elephants. The millions of dollars slated to upgrade exhibits all over the country would be better directed to effective conservation efforts, such as anti-poaching campaigns, rather than for our amusement or our “education.”

There is absolutely no proof whatever that there is any connection between seeing animals in zoos or circuses and people expending meaningful efforts to save them. Not only that, but elephants are one animal that simply cannot thrive in a zoo environment, at least as zoos are today. They need vast spaces to move about, they need appropriate social groupings, and zoos cannot provide these things. So even if it were true that seeing them in captivity results in meaningful work to save them, and I don't believe that it is, you are still forcing the ones that are in zoos to suffer conditions that cause pain, disease and premature death.

I believe we are approaching the end of an era, a finale in the practice of riding elephants and watching them perform tricks, and even in the way they are seen in zoos. Many people are working hard to ban the last remaining traveling elephant shows, and I predict that there will be less and less tolerance for the ways zoos keep elephants.

In making work that addresses the human proclivity, throughout history, to watch animals in captivity, my intention is to suggest universal rhythms and the universality of suffering in all living beings. Through continued development of this project, I will be putting forth what I hope is a valuable contribution to the continuously evolving and important subject of human-animal interconnections in American culture. My goal is to deepen my line of questioning to create powerful, evocative installations about human relationships with other animals, hopefully inducing incremental change regarding the treatment of ourselves, one another, and all living things.

All photographs by Colleen Plumb

Beginning in November, I will use social media to share where the projections will be located. November will provide longer evenings (thus more “air time”) and the leafless trees will allow the videos to be more easily seen. Stay tuned. In the meantime, you can watch video selections online here.

*This project has been partially funded by a Chicago Department of Cultural Affairs Individual Artist Project grant.