Recent years have seen a massive expansion in oil and gas production through hydraulic fracturing, or “fracking.” In 2000 fracking produced less than 2 percent of US oil. By 2015 production had grown to more than 4.3 million barrels of oil per day, or half of the total US oil output. At least fifteen million Americans live within a mile of a fracking well drilled since 2000.

At the surface, operators then collect the combined fluids and separate out the oil and gas. They either reuse the chemically contaminated wastewater or dump it, typically by stuffing it back down other wells.

This violent assault on the earth is escalating, both in the US and around the globe. Not surprisingly, it has created widespread, serious, and mounting impacts, including: 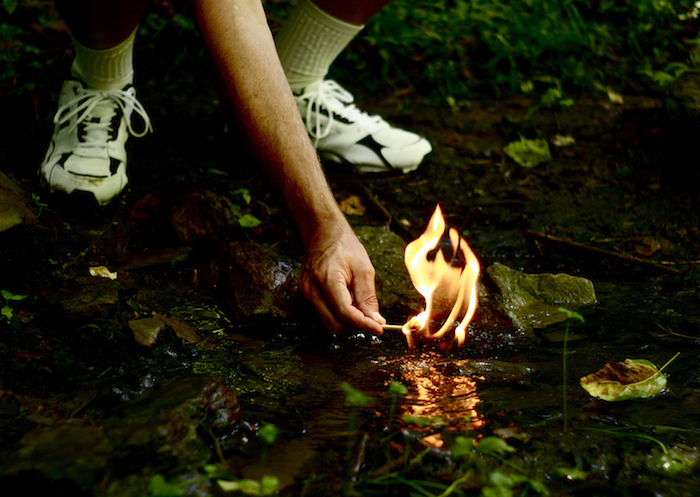 Air pollution. Drilling and fracking emissions contribute to toxic air pollution and smog at levels that significantly impact health. A Johns Hopkins study found that those living near active gas wells were up to four times more likely to suffer from asthma attacks compared to those who live farther away.

The impacts of fracking on people and nature are undeniable and unnecessary, especially in light of the myriad clean energy solutions available. We need to hold our governments accountable for these impacts, and for turning instead to energy solutions that respect the earth, rather than violate it. A focus on inherent rights is an essential part of this movement.

In 1948 the United Nations adopted the Universal Declaration of Human Rights, recognizing that “all human beings are born free and equal in dignity and rights,” and that “everyone has the right to life, liberty and security of person.” Fracking violates these fundamental tenets, impacting health, housing, occupational safety, and other basic rights. Fracking also directly implicates the human right to water, which the UN called “essential to the realization of all human rights.”

The Declaration adds that “the will of the people shall be the basis of the authority of government,” and “everyone has the right to take part in the government” system. Fracking violates these basic human rights as well. For example, in May 2016 the Colorado Supreme Court struck down local fracking bans, claiming that state law preempted local control over fundamental health and safety issues. In another recent example, the Ohio Secretary of State claimed “technical grounds” in preventing citizens using their initiative power to seek a public vote on fracking bans, despite citizens collecting sufficient signatures. Direct democracy is another fracking casualty—a doubling-down on fracking’s other impacts on human rights.

Fracking particularly implicates the rights of indigenous peoples, recognized by the UN in 2007. Indigenous rights violations include the failure to consult with indigenous peoples before approval of fracking operations that affect their traditional lands. Fracking also directly impacts their right to “practise and revitalize their cultural traditions and customs,” as described in the UN Declaration on the Rights of Indigenous Peoples.

These incontrovertible human rights violations should be enough to reject fracking. But in order to avoid repeating our mistakes, we must also recognize that fracking violates the inherent rights of natural systems and species. Fracking violently assaults the earth. The flare stacks and artificial lights from larger operations are visible from space. So is the upward buckling of Earth’s surface caused by high-pressure injection of fracking wastewater into disposal wells. Earth’s rights must be fundamental to any new solutions we propose, or we will fail again to create a healthy energy future.

In 2010 an assembled delegation in Bolivia of more than 35,000 people representing 140 countries approved the Universal Declaration of the Rights of Mother Earth. Like the Universal Declaration of Human Rights, this Declaration reminds us that fundamental rights derive from existence on Earth—a rule that is true for humans as well as ecosystems and species. Fracking violates nature’s right to “water as a source of life,” its “right to integral health,” and its “right to be free from contamination, pollution and toxic or radioactive waste,” among other articulated rights.

We cannot protect our own rights without recognizing that our rights depend on safeguarding the rights of Earth. Fracking, by definition, cannot meet this test. The enrichment of fracking operators cannot come at the expense of people and planet through undeniable violations of fundamental human rights and rights of nature.

Instead of simply accepting fracking’s violations of fundamental human rights and nature’s rights, or creating a new energy system that similarly disrespects such rights, we must reject fracking and seek alternative sources of energy that respect both people and planet.

Fortunately, renewable energy solutions abound, and we can implement them widely now. We can also sharply decrease the amount of energy we use, eliminating the asserted “need” for fracking. More respectful energy opportunities exist in many aspects of our lives. For example, in California the movement and processing of water consumes an enormous amount of energy; saving water saves energy. Better waste management reduces methane emissions from landfills. Cutting down on the amount of meat we consume cuts emissions incurred from the animals, and agricultural processes required to support them. Finally, protecting intact natural systems, such as primary forests, and restoring degraded nature will improve Earth’s climate health overall.

It is time for us to choose which future we want. Will we continue to allow fracking to trample fundamental human rights and the rights of natural systems? Or will we implement solutions now that respect those rights? Our response will speak loudly and echo out into the future. Let us choose wisely.

Simona Perry
From Our Curations