“And we are put on this earth a little space that we might learn to bear the beams of love.”

This is my story of how water led me to become conscious of the inter-connectedness of all life.

In 1985, inspired by the dry river beds I saw while driving and camping across the United States, I set out to capture the power and rhythm of those rivers. I gathered a team of people, and, using many colors of handmade paper, we cast 250 feet of a dry riverbed in Utah. One evening, after spending ten hours crouched over the riverbed patting wet pulp on every stone, I looked up. The Milky Way was beginning to pattern the indigo sky and those patterns above appeared to be similar to the patterns of the stones in the riverbed. The next day I learned that the first nations’ people in the area call the Milky Way “the river of stones.” It was then that I realized that water creates the pattern of every living thing, and I knew nothing about water.

I dedicated myself to the study of water. My search to learn about water serendipitously took a significant turn in China. One steamy, hot day in 1991 on the streets of Chengdu, I was unexpectedly asked to speak English with a group of Chinese professors. Among these professors was a biologist studying the health effects from water from a spring, called the “God Water” twenty hours to the north. He had found that the waters reduced tumors in mice and assisted in digestion. My curiosity was sparked; I was determined to visit the “God Water.”

It would be two years before I could go. In the 90s, the “God Water,” tucked away in the mountains, was difficult to visit. In 1993, accompanied by my son as a translator, I contacted the Chengdu company that was bottling the water. They immediately offered to drive me to their bottling factory. We traveled in an old jeep for two days, dodging potholes and mudslides. After more than twenty hours, the developed world slipped from view. We climbed a steep dirt road carved into the side of a mountain. There, in an old growth forest, was a small factory situated above the “God Water.” We were welcomed by the owners of the factory and local officials who provided us with a sumptuous lunch spread out on tables under towering pines. I vividly remember the hike we took after lunch, walking through the barb wire that enclosed the area and down into a steep ravine, through large ferns, rhododendron and moss covered rocks to the spring, now capped off.

Alongside the spring sat a newly built pagoda where I was offered a drink of the water. I drank deeply and to my great surprise my body responded immediately with sensations that I have never felt—a kind of aliveness in my cells. Our guides told us that by local practice this water was only to be drunk, not used for cooking or washing. When the inhabitants of the area were ill, they would visit the Lhama and for a small fee he would prescribe how much water to drink.

Now with the factory ownership, visiting the “God Water” spring was forbidden. As a concession to the locals, the factory owners put in a small pipe from the spring, into a trash heap of broken glass bottles. The plant owners claimed this pipe was a great improvement: People no longer had to pay for the water, now they could have it for free.

We soon learned that the heap of broken glass bottles was there because glass was too heavy to transport down the mountain. They began using plastic bottles only to discover that the waters lost the medicinal properties in a few days. The factory owners did not know what to do, and we suspected that the owners were hoping that we would buy the factory.

The experience triggered something deep in me. I was witnessing that moment when a water source that sustains a people’s health is bottled up and sent to far-off places. The water is dislocated, becomes anonymous, and the people who have protected and relied upon this water for thousands of years are severed from their life source. The knowledge contained in these waters would soon be forgotten. 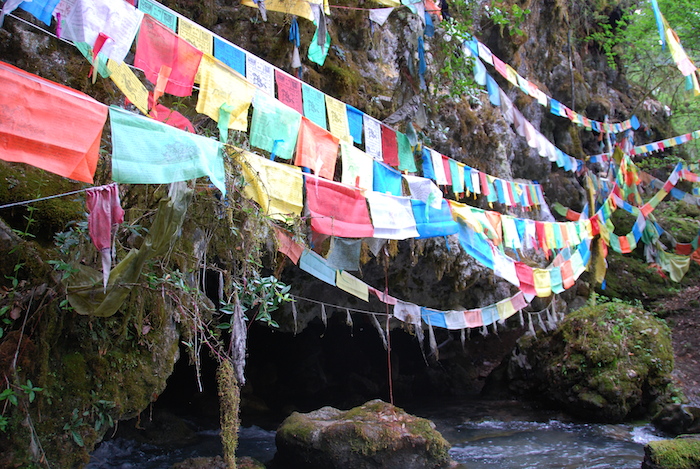 In my search to know water, I discovered that water is composed of one of the most flexible molecular structures. There is nothing like H2O; no work can be done without it. It is flexible and resilient. I have come to respect water as the most aggressive creative force we know. It determines every detail of our lives. It is a miraculous substance, and yet, much of the information I came across about water rang of disconnection. The human relationship with water in recent times has largely been characterized by attempts to corral and control rather than celebrate, preserve, and acknowledge the essential nature of this essential element.

The visit to the “God Water” propelled me forward. It invited me to rededicate and increase my resolve to work with water. In 1995, I invited twenty-five Chinese artists to make performances and installations along the filthy Fu Nan Rivers in Chengdu, Sichuan. These events were broadcast on national CCTV for two weeks, and led to the Chengdu Government inviting me to create the Living Water Garden, the first urban park to be designed as a seven-stage natural water cleaning system. Never have I experienced more determination and cooperation of art and science than in the making of this park. This seemingly small model spread the use of integrating wetlands into urban design throughout China.

From the Living Water Garden, I went on to work in Beijing with many companies as a designer of “living” systems. Over five years, I witnessed the simultaneous elimination of historic water sites, and the development of the Olympic park with its vast wetlands and forests. I was proudly shown these historic water sites when I first came to Beijing, and when they were eliminated by development, there was an uproar. I witnessed a city that was caught between development, and their cultural history of honoring water.

In cities around the world it is common practice to plan and build without understanding the available water. We transfer more water. We dam more rivers. Springs and streams are built over, wetlands filled, intertidal estuaries are polluted or developed into precarious housing. Rivers and their ecosystems lose their capacity to be resilient.

Thirteen years after my first journey to the “God Water,” I was determined to return. The water-bottling factory was abandoned, and the springs were now available to be used by the people again. This trip began my seven-year exploration of the water cultures in western Sichuan with a Tibetan filmmaker. We visited over forty different water sites, and found an extensive culture of honor and conservation throughout the Himalayas.

I was struck by one encounter in particular. On the mountain road to Muli Monastery is a small temple honoring a gushing stream. I was told that after the Cultural Revolution, with the extensive deforestation in the area, the stream had run dry. I asked the head monk how the water returned and, with a grin, he said he replanted the forest. He understood that the forest protected the waters.

We saw lots of trash in their water and asked permission to clean it up. The head monk again smiled and said that he would give us his students for the day. They ran down to the stream and began picking up the sticks and dead leaves. They did not know what garbage was because in the past everything was bio-degradable. When I explained what garbage actually was, they spent the next five hours cleaning every tire, cement bag, and other debris out of the river. When I returned to visit this monastery, the monk smiled again and said, “We’ve been continuing what you started.” 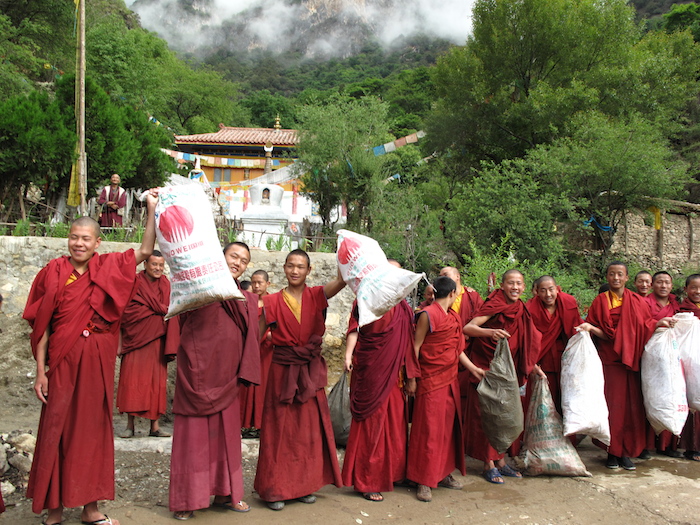 Some water sites were marked with flags, others with signs carved into stone, or a small temple. The people in these communities understood that the water was connected to the land and their actions, forests ensured springs would run, herd animals should stay away from headwaters, that human consumption should be thoughtful and moderate. They were keepers of their resource.

When valued water sites are destroyed and the practices of respect and protection are abandoned, we lose an understanding of the essential connection between water and life. However, it is possible to build and design cities where the waters are collected, protected and celebrated, where everyone can thrive in cooperation with life-giving systems. The water’s right to be alive is inextricably linked with our right to life, and the right to life of all living forms. In all her forms and with all her sounds, water calls us to cooperate as the keeper of the waters.

“There is no way of love, love is water.”

Artist & Founder - Keepers of the Waters

Betsy Damon is an artist and founder of Keepers of the Waters, supporting community-based models of water stewardship. Her work includes sculpture, teaching, lectures and workshops. In China, she created the nation's first public art event for the environment as well as the Living Water Garden.

Call of the Forest: Water