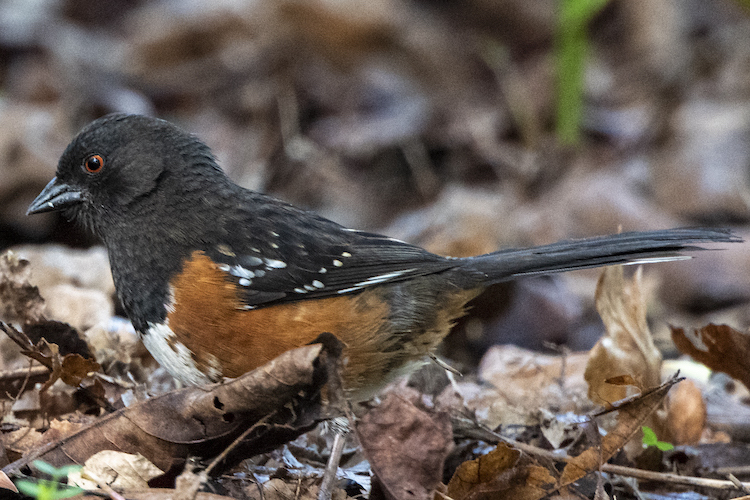 Though their songs and calls are better known, birds fill the world with other sounds. It is for this reason, and also because many birds would sooner be heard than seen, that the artist and author Jenny Odell writes that bird-watching is a peculiar name for the activity she calls bird-noticing. After all, “half if not more of bird-watching is actually bird-listening,” Odell writes in How to Do Nothing.

In fact, birds make an array of non-vocal sounds by using their bodies as instruments. Taking flight in alarm, Rock Doves (a.k.a. pigeons) clap their wings, sending a cascade of snaps through a flock. Mourning Doves, by contrast, seem to whistle when taking flight, and they, too, can clap. The wing feathers of male American Woodcocks and the tail feathers of male Wilson’s Snipes are shaped for the displays each species makes in spring: brazen flights over territories, chased by the otherworldly howls of wind passing through feathers. A male Common Nighthawk, meanwhile, dives aggressively near his territory. Surrendering to gravity, he manipulates the flow of air by flexing his wings. This creates a booming sound, as if he’s splitting the atmosphere itself. Listen and you can hear air through the feathers of even the smallest birds, as the wings of many male hummingbirds buzz and hum. Here in Denver, Colorado, I am finally sure of spring when I hear a male Broad-tailed Hummingbird fill afternoons with the insect-like trill of his flight.

Before the hummingbirds arrive, resident woodpeckers begin drumming. In Denver, the percussions of Northern Flickers chase away winter—bass drums on hollowed cottonwoods and snares on the gutters of our roofs. A male Downy Woodpecker, meanwhile, has made a telephone pole in my backyard a worthy complement to the Flickers’ heavy metal.

Other sounds, and the sort that draw me in most, are less adaptive, less intended. These sounds are not signs to protect territories and call to potential mates. They are simply this: the sounds of birds as they live their lives in their chosen habitats.

In autumn, as cattail marshes dry, Red-winged Blackbirds, noisy and vocal enough birds to begin with, seem to grow in size and weight. Their invisible movements are loud, loud enough that I have thought I was hearing some other marsh animal trampling reeds: a Muskrat or even a Coyote. (I suspect that a Coyote is somehow much quieter in a marsh than is a single Red-winged Blackbird.) American Robins, similarly, sound heavy in the autumn, heavy as a squirrel, inspecting the newly fallen leaf litter for food.

Of the autumn bird sounds, those of Spotted Towhees are most singular. Indeed, the bird’s scratches in newly dropped leaves produce sounds that could be considered field marks for the bird. During Denver’s winter, no other ground feeder—not the numerous Dark-eyed Juncos that arrive in Colorado in late autumn, not the Robins—makes a sound that can be mistaken for that of a Spotted Towhee.

Spotted Towhees are large sparrows, the western counterpart to the closely related Eastern Towhee. In the Denver metro area, Spotted Towhees are the only year-round, backyard sparrow. Almost anywhere that one finds undergrowth and leaf litter in Denver and its suburbs—that is, wherever one finds a landscaper tolerant of disorder—one may find Spotted Towhees. 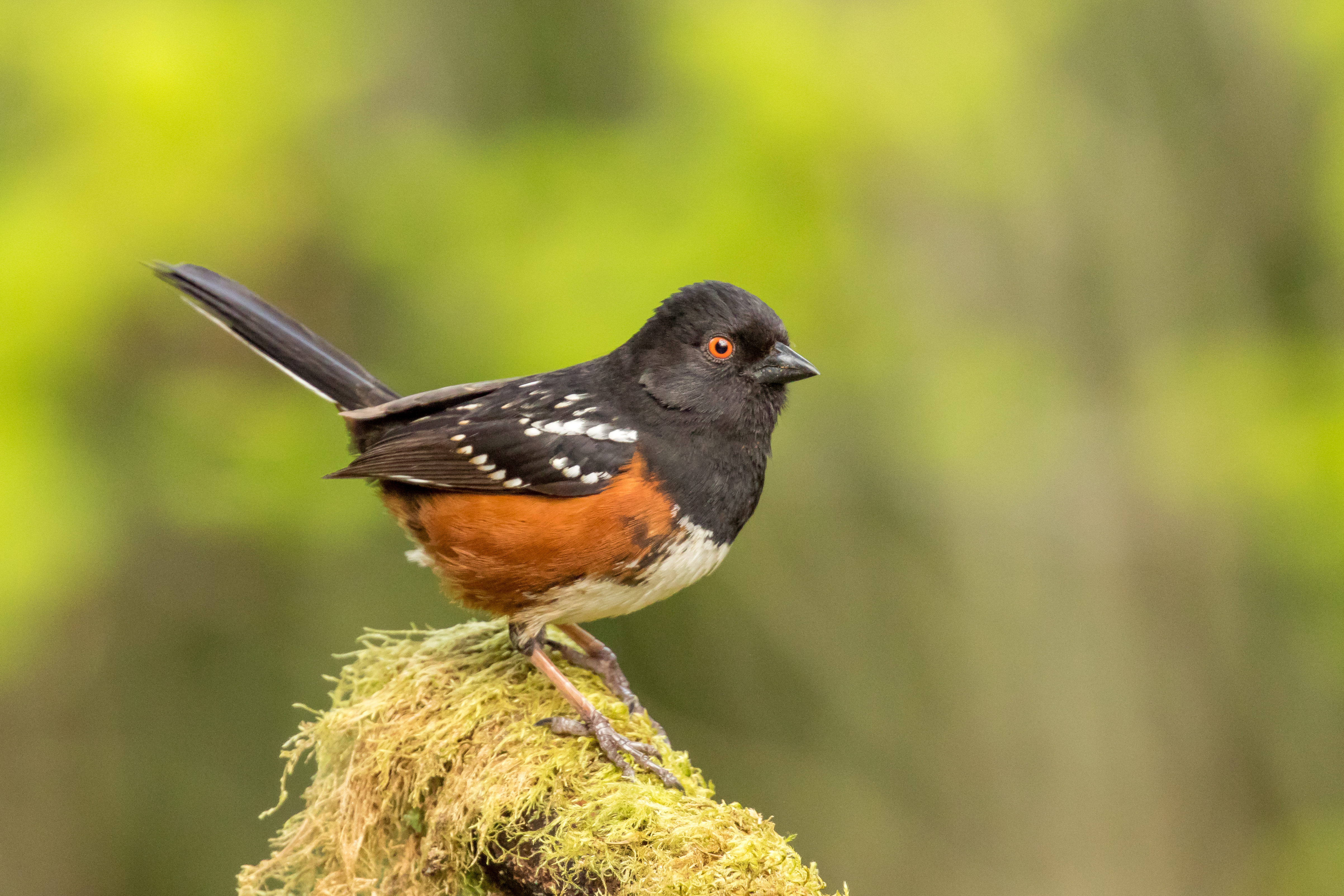 Visually, Spotted Towhees are striking studies in the use of color. Their black heads and backs contrast with white spots and belly; the contrast is just slightly less marked in the female, as her black feathers appear more washed out than his. The contrast is softened by rusty flanks. Deep red eyes add energy to their physical composition. As striking as they are, I find Spotted Towhees difficult to photograph without pulling the life and vibrancy from the birds. So much of a Spotted Towhee exists in sounds and movements that photographs of the bird look to me like stuffed specimens frozen in pose.

Vocally, the bird is a combination of harsh mews, soft calls, and, from the male’s beak, a song of rings and rattles. During breeding season, the male Spotted Towhee takes all kinds of risks in his backyard territories, given the presence of Cooper’s Hawks and outdoor cats. He boldly sings from exposed perches. He chases away other males by working the edges of backyard habitats. Taking positions on low branches, telephone wires, and fences, he raises and flashes his long, white-edged tail. When his competitor retreats, he sings again. 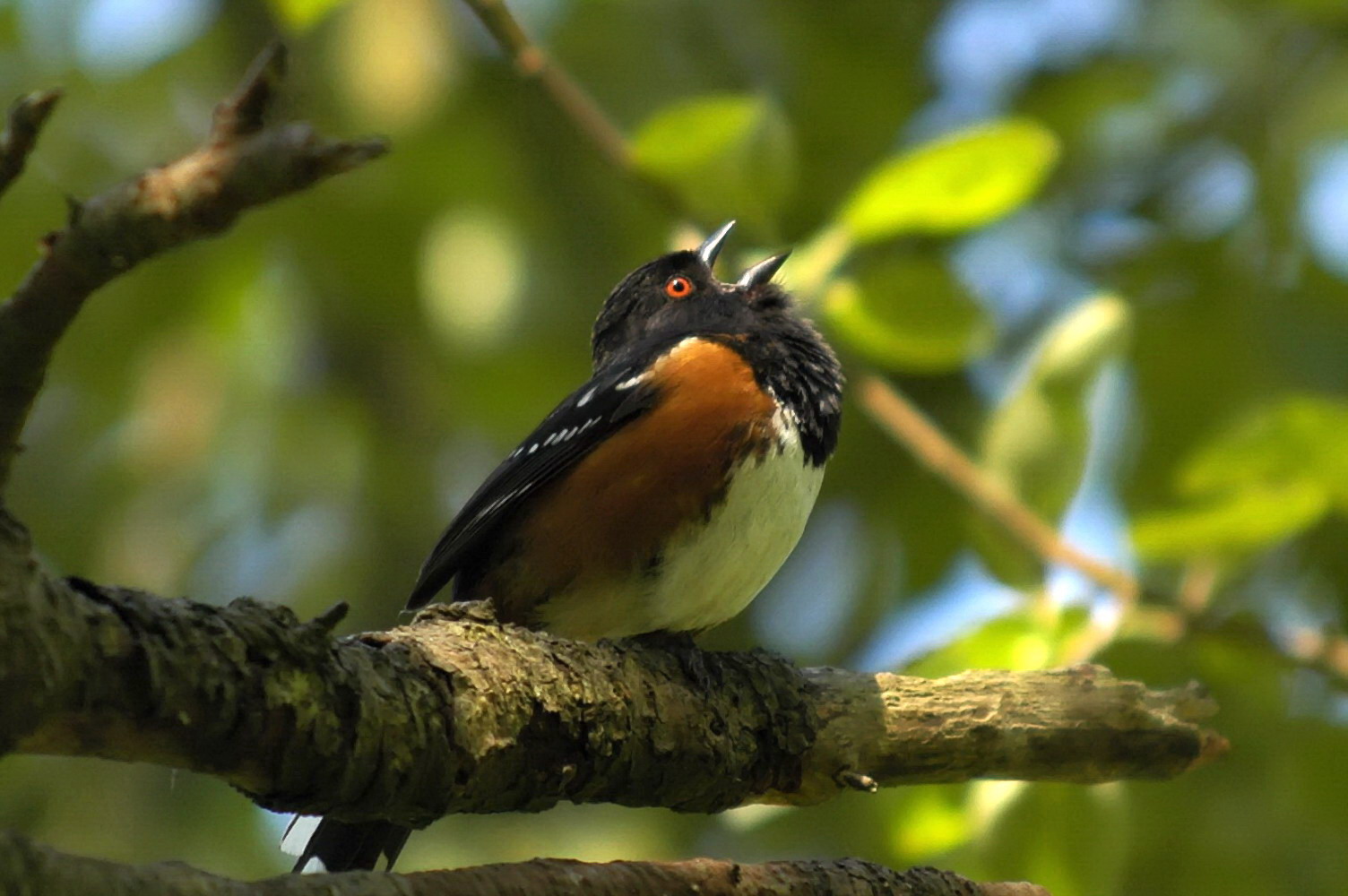 It’s the Towhee’s way of feeding, though, that produces their singular sound. Spotted Towhees frequently seek food—seeds and small insects—by standing in place, kicking both legs back, and scratching the ground. The bird does this “double-scratch” repetitively, clearing away debris that might hide food. In my yard, I’ve noticed small impressions that Spotted Towhees have left in piles of mulch, the chips of wood displaced by a bird’s effort.

Most of the year, neither the action nor the sound of double-scratching will tell a birder that they’re in the presence of Spotted Towhees; other sparrows, including the similarly-sized Green-tailed Towhees that migrate through Denver in spring and early fall, also feed in this way. (This is nicely captured in a video by Timothy Barksdale, which shows both a Spotted Towhee and White-throated Sparrow scratching for feed in snow.) But because no other similarly-sized sparrow typically remains in Denver through the late fall and winter, the sound of double-scratching in the crisp, newly fallen leaf litter gives away the bird. Good thing, too, for those wanting to encounter a Spotted Towhee. In fall and winter, Spotted Towhees are less vocal, bold, and conspicuous than they are in the spring. They’re often content to seek food deep in the cover of underbrush, where they disappear into the tangle and shadows. 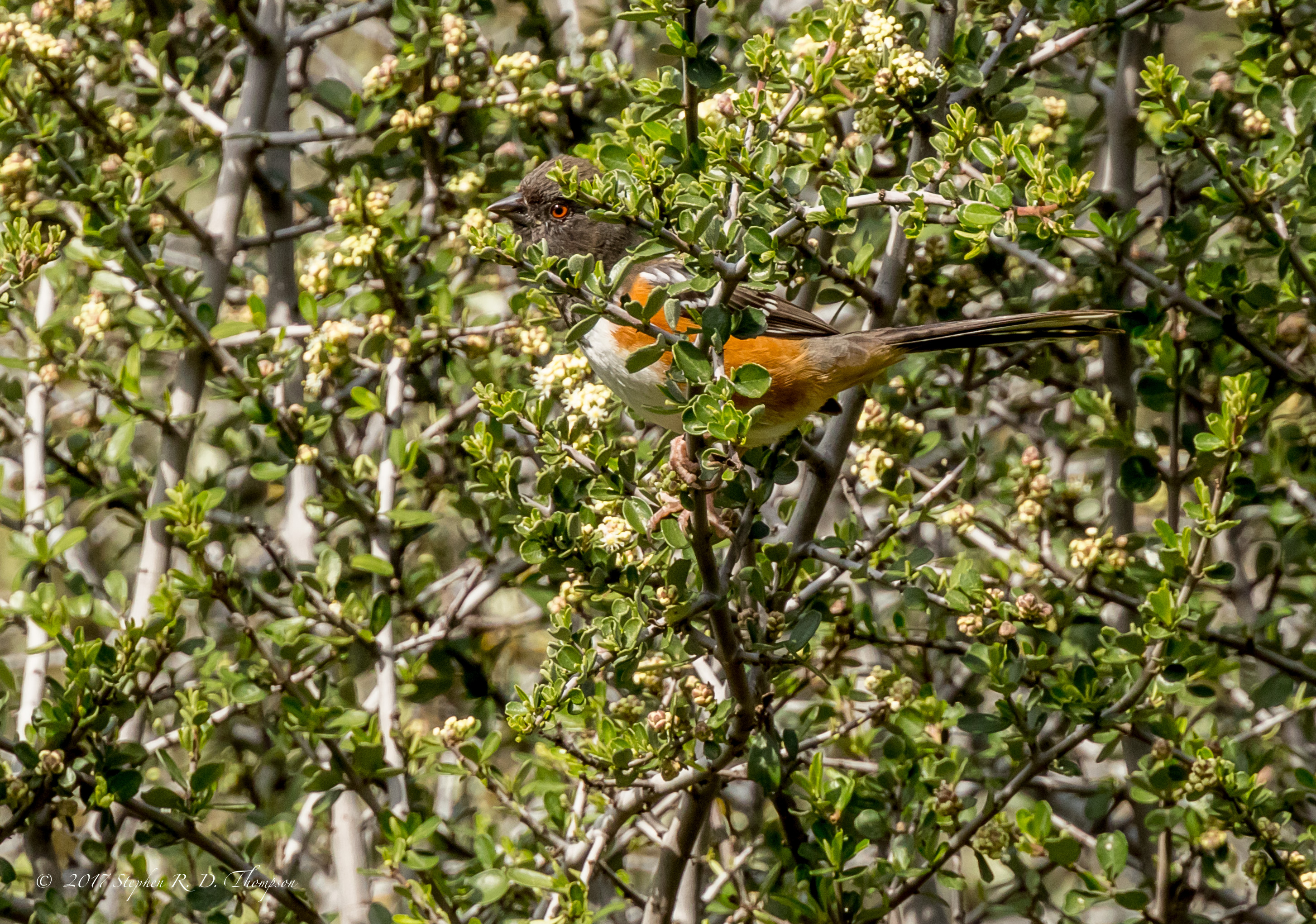 What does double-scratching in leaf litter sound like? The word “rustle” comes to mind, but that word equally applies to the sounds of Song Sparrows at the overgrown edges of water, American Robins in the same leaf litter as Towhees, the sounds of rodents scurrying beneath grasses, and even earthworms pulling leaves into their underground burrows. (Jack Gedney, in a lovely essay on Towhees, calls the sound The Big Rustle, distinguishing it from all these other rustles.) A Spotted Towhee rustling through leaves is its own kind of sound. To my ears, other birds make exploratory moves in leaf litter; a haphazard path of rustles trails them. (Perhaps it is simply that I have not yet noticed the music of a Robin’s or Junco’s moves.) Spotted Towhees, by contrast, often find a spot and just keeping scratching. A series of scratches, in orderly succession, sends leaves flying. Pauses interrupt the series, as the bird inspects her work.

I have lived with families of Spotted Towhees for five years now. I have stumbled upon a female as she incubated eggs behind my garden box. I have watched adults feed young, sometimes their own and sometimes that of the Brown-headed Cowbirds that often parasitize Spotted Towhee nests. Certainly, I had heard the Towhee’s rustle, too. But like all living things, the Spotted Towhee is worth noticing, again and again. It is only recently, only over the past few months, that I have heard the sounds they give off while kicking leaves and thought to listen, recognizing that I was in the presence of the bird.

This distinction—between hearing and listening—is slight, like that between seeing and watching. The first of the pairs is passive, unintentional, and brief, as when an animal darts through one’s field of vision, a blur of feathers or fur announcing their physical presence. One may hear a bird’s call or song in a similar way. Passing a tangle of brush while birding, I have often heard the male Spotted Towhee’s song. Usually, I merely acknowledge him, adding his name to the outing’s list of birds before moving on. He is expected, after all. Common, by the standards of birders.

By contrast, the components of Odell’s (the author I mentioned up top) bird-noticing—watching and listening—are active, intentional, and patient. Softening attention, one attends to a bird beyond the field marks described in the field guides. Sustaining attention, one stays with birds even after their identities, as representatives of species, are known. With time, the birds might stay, too, offering more of their selves, their ways of being in the world, to the observer who takes notice.

Jared Del Rosso is an associate professor in the Department of Sociology and Criminology at the University of Denver. Among many other things, he teaches courses on urban wildlife. He is an avid birder, a volunteer with the High Line Canal Conservancy, and a semi-professional woolgatherer.