Editorial Note: In this issue of Minding Nature, we celebrate the posthumous publication of Strachan Donnelley’s Frog Pond Philosophy: Essays on the Relationship between Humans and Nature. The book includes an Afterword written by its editors, Ceara Donnelley and Bruce Jennings. The following is an excerpt from a section of the Afterword written by Ceara Donnelley.
She can be seen discussing the book here.

Though this book was compiled in my dad’s final few months, it is far more than a testament to his equanimity and resolve in the face of mortality. Rather, it captures the evolution of those big ideas and inscrutable questions that followed and propelled my dad through his good life. At first glance, the book’s sections may seem unconventional in that they contain works of academic philosophy alongside essays on natural encounters, literature, political events, and even a close friend. That is fitting—my father was an unconventional man (or, as he came to call himself, a marginalist). When he first assembled these works, he identified two dominant strands: those essays tackling his philosophical “magic mountains” (see his own introduction for an explanation of the term), and those drawing on his encounters in the natural world, or the “living waters” (for such encounters often, though not always, involved fly-fishing). But even he knew that these two categories could not capture the breadth of his writing, and so it was up to us to find the right way to assemble this volume.

The aspects of my dad’s mind and intellectual curiosity captured in the sections herein reflect the dominant strands of his intellectual and personal identity: Strachan the Agitator (“A Guide for the Naturally Perplexed”), Strachan the Naturalist (“Variations on Aldo Leopold”), and Strachan the Philosopher (“Recovering a Philosophy of Nature”). They are bookended by meditations on one of the most profound and transformative relationships of my dad’s life. Father Francis Kline’s friendship revealed to my father a deep spirituality that he might not have otherwise recognized in himself, and it lent language to a critical self-identification my dad had not yet made: Strachan the Marginalist.

Woven throughout the book are common themes, thinkers, and ideas. The modes of thought that my dad practiced fed very much off one another, and though these sections represent an evolution of his thinking and his philosophical and practical concerns, it was a nuanced evolution (isn’t it always?), with much circling back to seminal themes, early ideas and notions, first intuited roughly and later honed through thought and experience. Indeed, critical to an understanding of this book, and my dad, is the faith that profound insight and deep truth come in many forms and through wildly diverse experience—so an idea first sparked in grappling with Whitehead as a graduate student may take shape later in a trout stream, or while reading Russian literature, or while listening to a great Verdian opus.

The totality of life is what interested my dad. He wanted to live it, first and foremost; then try to understand it; and then work to use that full life and its contemplation to better this earthly world, its humans and nature alike. Throughout this ambitious endeavor, my dad remained ever humble—he was equally convinced of the need for deep thinking as he was of the fundamental limits of the human capacity to understand the natural (including human) world and its workings. A favorite line of my dad’s was “Ignoramus: we are ignorant.” But that didn’t stop him from always trying to learn and understand more about the world in which we live, nor should it stop us.

What I hope to have conveyed in these brief words is that, in addition to a book about ideas formed through philosophy and fishing and living, broadly speaking, this is also a book about an extraordinary father. Growing up, my sisters and I met my dad’s magic mountains around the dinner table, and we waded the living waters with him. We were challenged to think big and beyond ourselves, but always with wisdom, humor, humility, and love. And we were, in the end, blessed by a final gift I’m not sure my dad realized he gave us: the witnessing of a graceful if untimely death, a rare glimpse of the most profound of humans and nature experiences. My hope for this book is that it be an equally powerful gift to those who read it, by provoking contemplation of what it is to lead a good life, by asking big questions about this human and natural world, and, hopefully, by pointing the way to some answers. 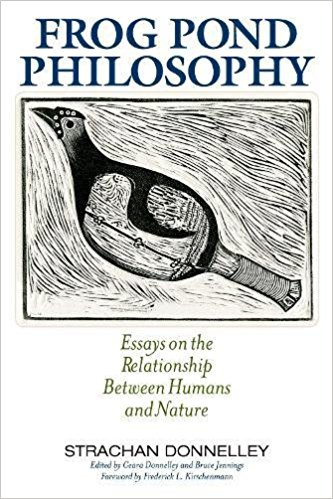 Since her father Strachan Donnelley's death in 2008, Ceara Donnelley has been committed to carrying forward his work and legacy. She has done so as Vice Chair and Strategic Counsel of the Center for Humans and Nature, the non-profit Strachan founded to explore and promote human responsibilities to nature, and as co-editor of Frog Pond Philosophy, a compendium of Strachan's best writing and thinking that was published in 2018 by the University Press of Kentucky.