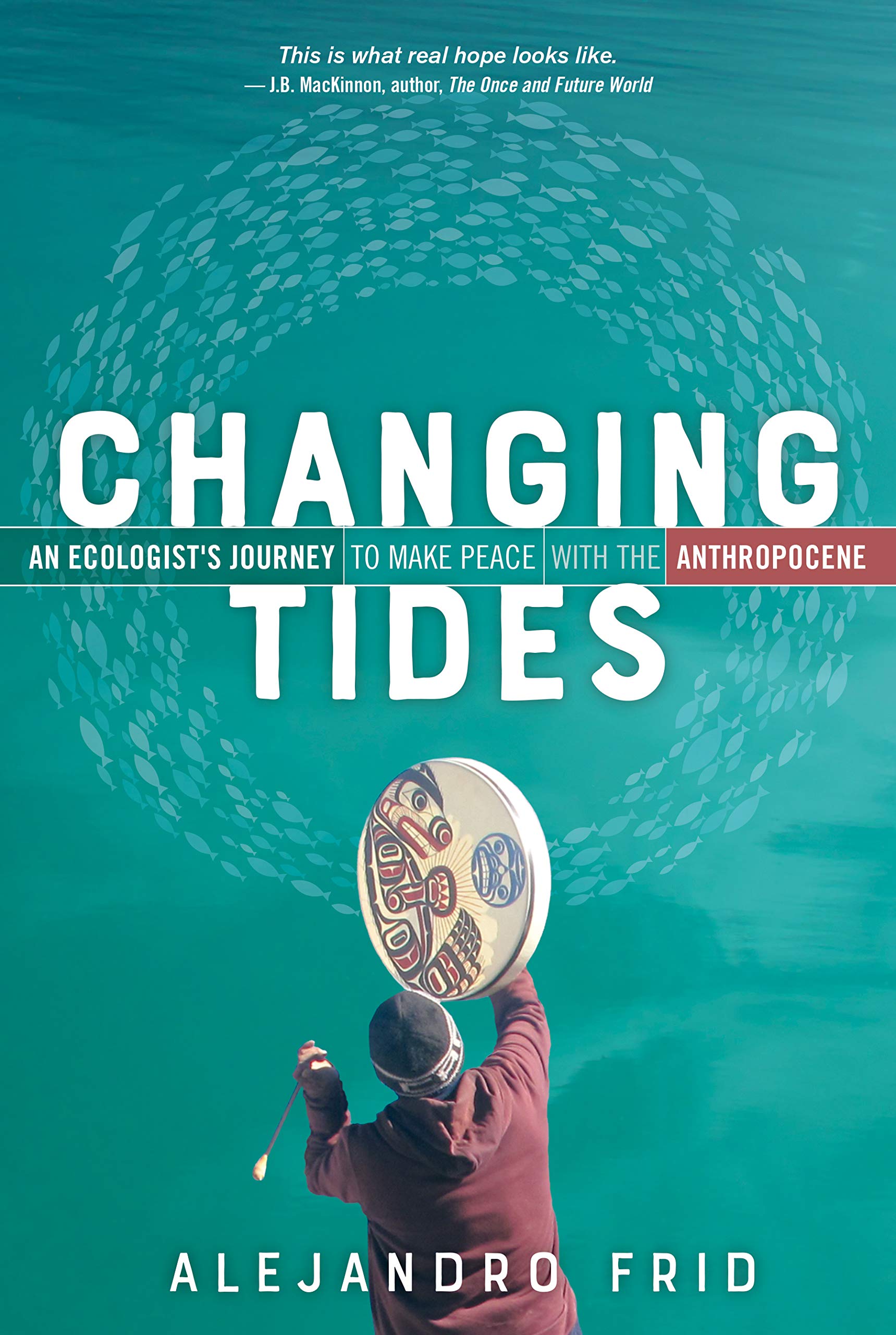 Throughout my reading of Changing Tides: An Ecologist’s Journey to Make Peace with the Anthropocene, I found myself distracted by updates and conversations on social media about blockades, arrests, and ceremonial fires in northern British Columbia, then in Vancouver and across the country. A group of hereditary chiefs from the Wet’suwet’en Nation have been in court battling plans for the construction of a pipeline through their traditional territory since 2012, and this past winter, as they blocked the road into that territory, they faced militarized police, helicopters circling overhead, and bulldozers. Dozens were arrested, but those who oppose the pipeline appear undeterred.

These are “land defenders.” Now that it’s 2020, this and similar terms are being used in mainstream vocabulary. It occurs to me that this linguistic acceptance represents a subtle but important shift in the standard and widely accepted story about human beings, in which we are understood to be a rapacious species that can’t help but destroy the living world. When we call someone a “land defender,” we are acknowledging that humans can be more than this. This is the shift that my neighbor, author and ecologist Alejandro Frid, hopes to promote with stories and evidence that human beings are capable not only of conserving the living world, but of enhancing it as well.

Frid works with a group of Indigenous nations on the central coast of British Columbia who have joined forces to actively manage the marine resources in their territories. One of his central learnings from this work, he writes, is that despite having had the ability to deplete critical marine resources in the area—in pre-colonial times, the human population of this area was robust, and people had access to sophisticated technologies used for hunting and fishing— the first people in this area did not do so. To be clear, Frid does not claim that pre-industrial humans lacked destructive abilities or the inclinations of modern humans. Hunter-gatherers spent centuries, he writes, wreaking havoc and causing extinctions on new continents. Eventually though, they settled down. “The land ceased to be an expanding frontier and became home, the place where we humans can find our medicines, our songs, our stories—the reasons why we humans exist at all.”

Despite the damage inflicted by the past several hundred years of colonial oppression, this sense of home is still alive among many indigenous peoples. As one hereditary chief explains: “Heiltsuk have been present in traditional territory since time began and will be present until time ends.” The implication of that belief, writes Frid, is a “cascade of commitments and responsibilities.”

Frid points to traditional stories to demonstrate how the principles of restraint, responsibility, and respect of other species operated in both spiritual and social realms. These values also translate into reciprocity, which goes beyond conservation and “stands out for its tangible marks on the landscape in the form of tended landscapes that enhance wild species, allowing them to thrive in ways that are completely unlike industrial agriculture and its objective of homogenizing the landscape into a few domesticated crops.”

In rock walls built at the intertidal zones to increase the productivity of clams, in patches of shoreline modified to boost the productivity of root and berry plants, we see evidence of reciprocity. We humans are capable not only of restraining ourselves, but also of nurturing the living world. In return, it nurtures us.

The colonial mindset, writes Frid, thrived on the simplification of the world. The result was the severe diminishment of native species and the suppression of any culture that stood in the way of the land “over which they believe they have been granted divine authority. The consistent outcome has been a suppression of world views about how humans might interact with all other living things, a narrowing of the collective psyche.”

Frid sees the story of industrial fisheries on the west coast as a reflection of that collective psyche. These fishers, he writes, “have a track record of targeting the best and easiest pickings first—whatever is closest, shallowest and has the best market price—until the near annihilation of a resource forces them to go farther and deeper in pursuit of other species that might yield a lower financial profit.”

Between 1970 and 1990, commercial fishing fleets removed more than 90 percent of rockfish biomass along the BC coast (less than 1 percent of the documented history of indigenous fisheries for rockfish). This decimation, however, pales in comparison to what happened to the herring. Between 1954 and 1967, industrial fishers removed an estimated two-thirds of herring biomass every year.

And all those fish were caught to be processed into fish meal and oil, meaning that the overexploitation of an ecologically significant species that is also a cultural keystone occurred not to feed people directly but, rather, to produce fertilizers and animal feed—key ingredients for industrial agriculture that exacerbate climate change and other global problems.

While Frid acknowledges that a lack of good data on fish populations may have played a role in this devastation, he states his belief that there was—and remains—a more significant force at play than mere data. “The declines of herring and other culturally significant species is rooted in racism,” he writes.

The story of Indigenous leaders on the central coast of British Columbia fighting to protect the health of local crab populations is enough to make a reader think he just might be right. Traditional laws of the Wuikinuxv, Kitasoo/Xai’xais, Nuxalk, and Heiltsuk people dictated that if fishers caught a male crab that was large enough to have reproduced for several years, it could be harvested. Harvesters were also expected to make qualitative observations about the health of local crab populations:

They would also watch other crabs walking along the bottom and, based on prior experience of the place, assess whether local crab numbers were going up or down, or were stable. Then they would think about relatives back home. Who has not had crab for a while and could use some? How many do I need for my own household? Do I have enough for the next potlatch? All these pieces of information would then determine whether the harvesters would haul the hoop trap with crab or empty, and whether they would reset it.

During the 1990s, the levels of commercial crab fishing increased in and around the traditional territories of the Wuikinuxv, Kitasoo/Xai’xais, Nuxalk, and Heiltsuk. The commercial fisheries managers (from the Department Fisheries and Oceans, or DFO) were allowing only the harvest of large males. They had no data to back them up, but they assumed that if females and smaller males were not harvested, then reproductive rates would remain adequate. For a decade they ignored contradictory evidence brought to them by local Indigenous leadership.

The three neighboring communities started working together to ask for the closure of the commercial fishery in traditional areas. Frid says that by the time he started working with them in 2013, the relationship with the DFO had become combative. “‘Prove that you have a problem,’ had become the tired, and vacuous, challenge from one particular crab manager.”

In 2014, community leaders, invoking legal principles that require hereditary chiefs to protect resources within their tenure areas, closed off ten areas to commercial and recreational fishers. They asked DFO crab managers to recognize those closures, writes Frid, but they refused. So, with the co-operation of commercial and recreational fishers, the communities worked with Frid to conduct a ten-month experiment that would produce data showing the impact of the commercial fishery. Frid writes that he expected the data to settle the issue, but DFO countered with a request for more data—to prove that Indigenous fishers were having problems catching enough crab to satisfy their cultural needs.

In the years following, further research set out to create quantitative data to do just that. Researchers found that until the 1990s, fishers caught an average of twenty-two crabs per trap. At the time, the interviews were being conducted, that number was closer to five crabs per trap. Perhaps it was this “proof” that people were struggling to access an important traditional food that caused the tone of conversations between community leaders and fisheries managers began to shift. Since 2017, the DFO has honored four requests by these communities to shut down commercial fisheries.

For Frid, while this story exemplifies the racist attitudes that allow over-exploitation, it also offers hope: things can change. Indigenous groups who were historically at war now work in close collaboration with one another. The Supreme Court of Canada now recognizes oral narratives as valid evidence used to reconstruct historical land relations in support of land title cases brought by indigenous nations before the court. Science and policy makers, like those at the DFO, can embrace traditional ways of knowing. If they do, it will create stronger foundations for resource management and fundamentally alter the “collective psyche of industrial civilization.”

Frid points to the system of Hereditary chiefs, who are responsible stewards of specific places, as being critically important in the Anthropocene. Their authority, he writes, is contingent on the chief maintaining knowledge of those resources and their sustainable management, transmitting that knowledge intergenerationally and redistributing his or her own wealth derived from those resources. “Staying connected to place, for the long run, is a key responsibility of the chiefs.” In his work with Indigenous communities, Frid says this system of governance is often invoked to push for the establishment of marine protected areas. While such actions can’t stop the change that comes with a warming climate, they can give certain species a better chance of survival and keep ecosystems from tipping over into a state from which they will never recover.

Most of us, like Frid, are “descendants of wandering ancestors.” We can’t be expected to understand or adopt the visceral sense of “home” felt by indigenous peoples. However, he urges that what we can do is learn, respect, and embrace the laws and ways of knowing that came before us. Based on his explanation of the system of Hereditary chiefs in this book, it seems to me that finding ways to engage with them in the co-creation of the laws we all live by seems like a critical step to becoming naturalized citizens of the lands we live on.

In Changing Tides, Frid does not offer us a way out of the Anthropocene—out of climate change and species extinction. Similarly, he does not offer us any straightforward manner of resolving the conflicts between industry and the land defenders who stand in its way. What he offers is the possibility that with a shift in perspective, we can better manage these challenges. That shift is initiated when we change the stories we tell. When we tell ourselves that humans are rabid consumers and an unstoppable geologic force, we will be so. If we tell ourselves that human nature is not fixed, and that collectively we are capable of continuous improvement, we will step up and do the work.