Central to nature is the art of adaptation. The plant prefers not to be eaten, so it produces toxic secondary metabolites. The insect, in turn, prefers to eat the plant, evolving mechanisms to modify those toxins.

There seems to be an infinite variety of ways that life can meet the challenges of living, the permutations of which are observed both macroscopically and microscopically, empirically and theoretically, by tracing the fossil record or by surveying our modern landscape. It’s no surprise then that under the current timeline of a global pandemic, humanity must find, and has found, novel ways to adapt to daily stressors.

As a medical technologist working overnights in clinical microbiology, the SARS-CoV-2/COVID-19 pandemic has forced me to wade into the depths of my own existential fatigue. Since the beginning of the New York City outbreak, I have been heavily inundated at the hospital, conducting the PCR nasal swab tests that aid in the diagnosis of COVID-19. To date, I have personally processed over 5,300 nasal swabs and have released the results of thousands more. Unlike physicians, nurses, and paramedics, for instance, my colleagues and I do not have direct contact with patients. And yet, ambiguously, we do. We know their names, their ages, and what units they’re on; we can view their EMRs for their photos, addresses, and medical histories. Thus is the paradox of the technologist: our patients are physically present (through their blood, tissue, and body fluids), but not entirely, and they are psychologically present (when we view their charts or call their providers), but not entirely present that way, either.

At the beginning of the outbreak, I was flooded with samples from all five boroughs of New York City and the immediate beyond—multitudes of people streaming in, whose lives all flowed through my fingertips. From March 18 to April 6, I worked twenty nights in a row to help dam the deluge. 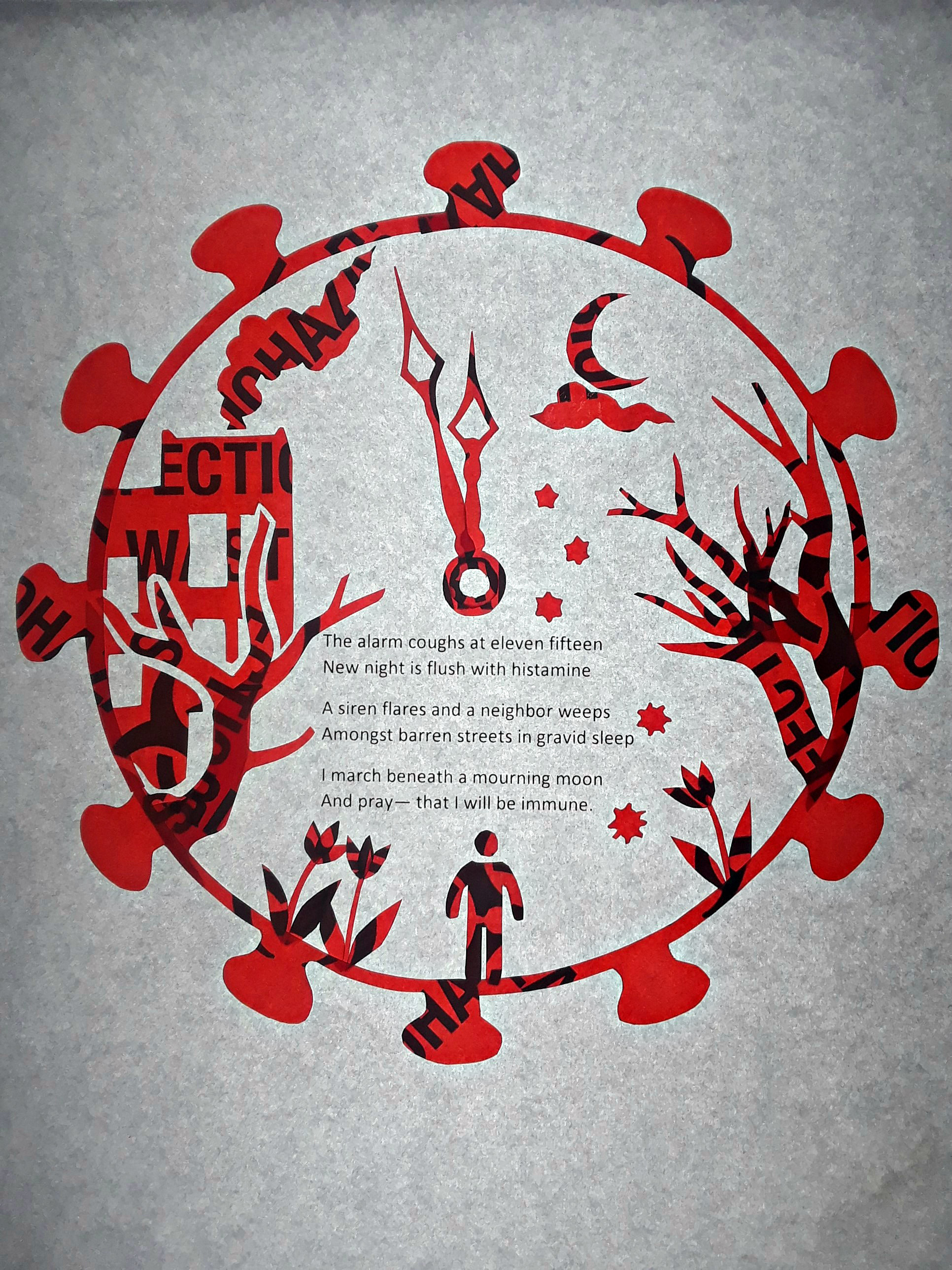 However, unlike the bustling emergency rooms and intensive care units, the hospital lab is an eerily calm place. Vivaldi played faintly in the background as I pored over the results of those PCR tests. And as, night after night, the percent positivity rate continued to rise, I knew that there would be significant death. I remember tracking the numbers of intubated patients. I recall one night when multiple clinicians called me about the same person, a patient who was awaiting emergency surgery. They were holding off for the result.

Unfortunately, it was invalid.

“I’m so sorry,” I sighed wearily. “But there’s nothing I can do. I can’t change what the machine says.”

There was a heavy pause on the other end. This was not what the physician had hoped for. In the silence, I heard the anxiety of one who would have to dive into the unknown.

“I understand,” he finally replied in this gentle, forgiving tone, punctuating our call with the poignant last words of a martyr. 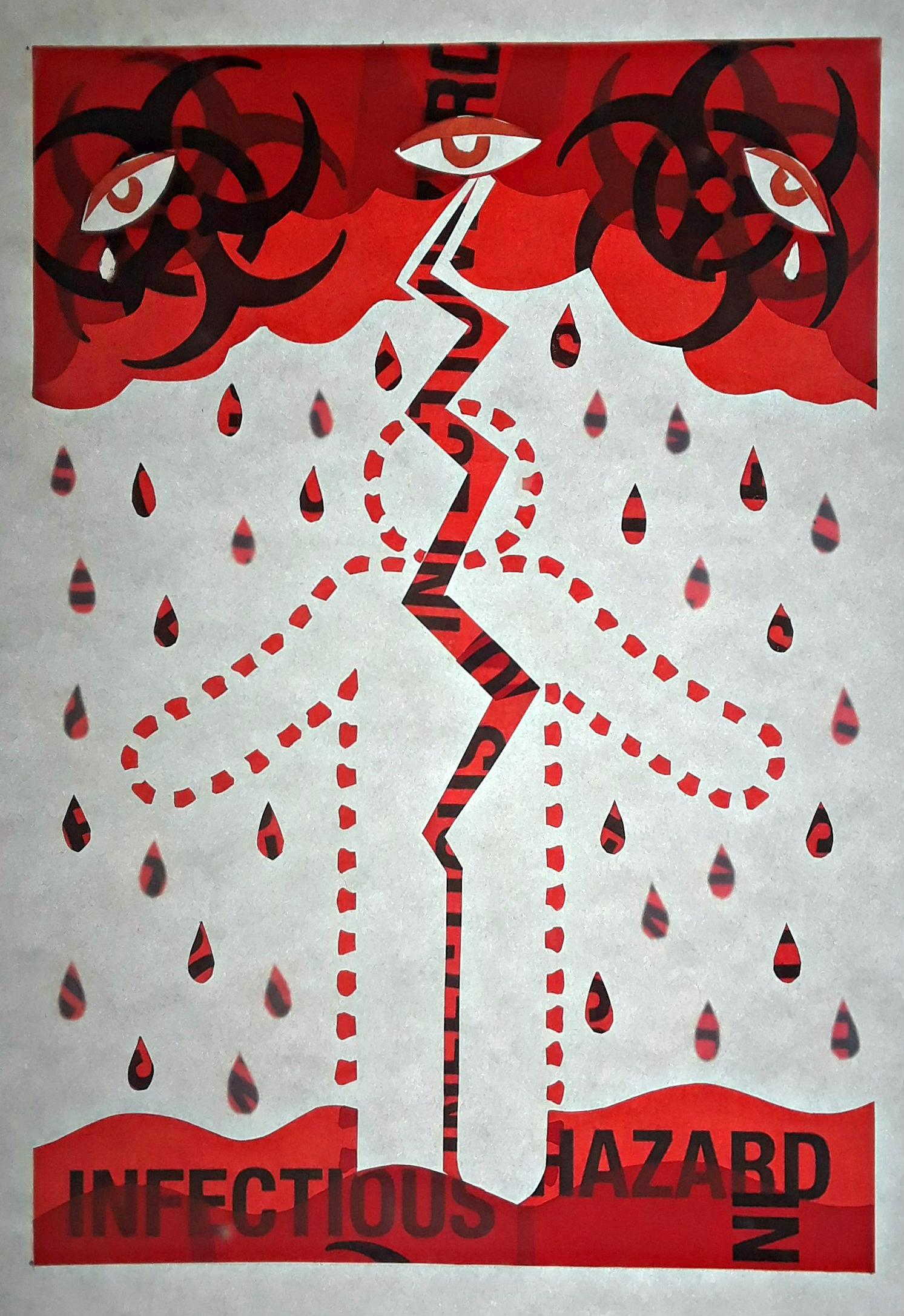 After those twenty nights, I instinctively felt the need to process my experiences, compelled by that curious human drive to make meaning where it didn’t exist before. After all, grief and trauma can be toxic if left alone. I learned this lesson once as a child trauma survivor, and again as an undergraduate studying toxicology.

For some reason, on April 8th, I reached over for the roll of biohazard labels by my desk and intuitively knew that I wanted to create artwork out of them. But why? The answer wasn’t immediately obvious.

Unlike many animals, humans are neither poisonous nor venomous. Perhaps this is for the best, but there were times when I was very vulnerable and wished to be toxic as a way to protect myself from others. I was particularly fascinated by the natural phenomenon of aposematism. A defensive strategy, aposematism involves visually striking colors and patterns that signal the presence of an underlying threat, such as a toxin or sharp spines.[2] Common aposematic color codes pair red, yellow, or orange with black, although there are many other variations involving brown, white, or blue, as well. Some iconic aposematic beings include black widow spiders, coral snakes, poison dart frogs, and yellowjackets. Any predator foolish enough to attack an aposematic being would quickly learn a painful lesson. 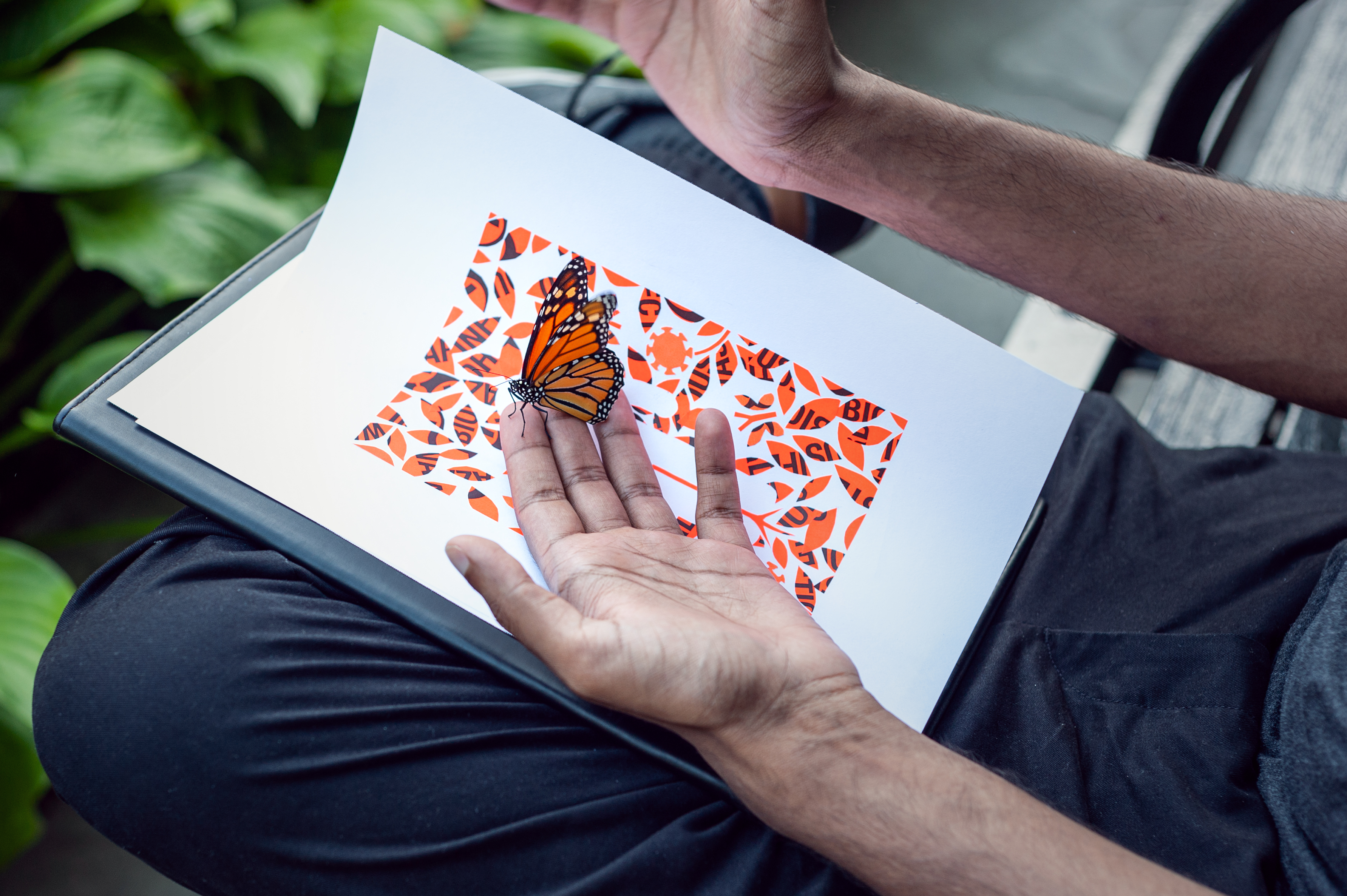 And that was exactly the allure of the biohazard label. It existed as a visual warning for clinicians and laboratorians alike to pay attention to their surroundings, to handle the dangerous agents around them with caution. It was a type of symbolic threat encoded in tangible form, easily and primitively understood. The harsh contrast of neon orange and black screamed danger, and at a time where I was struggling to voice myself, the label was my unexpected advocate. I could communicate in a way that was raw, jagged, and visceral, projecting my emotions onto paper through collage as if it were a second skin. 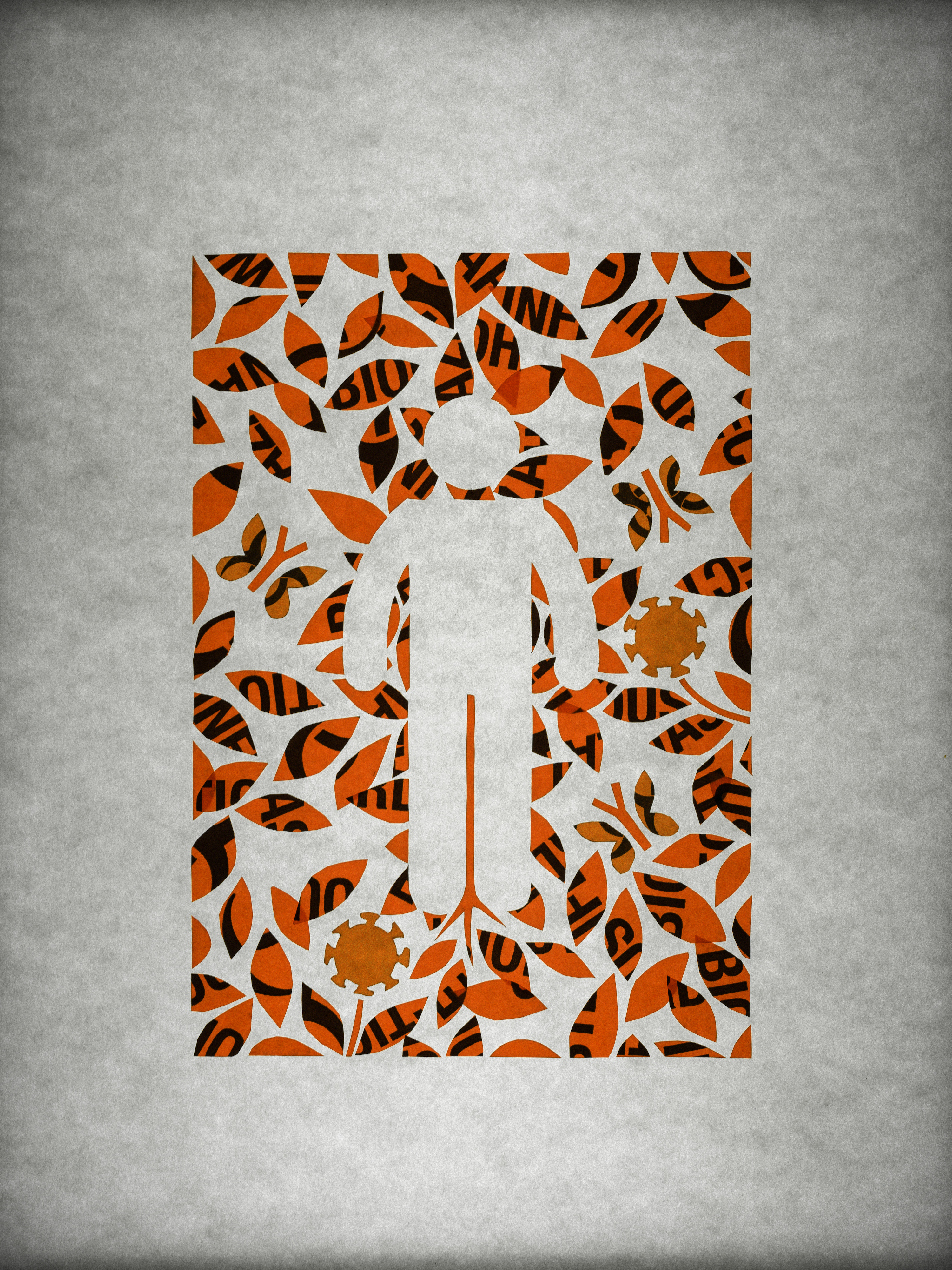 While venomous animals can synthesize their own chemical cocktails, my creative process was more akin to the evolution of the poisonous animal—beings like the monarch (Danaus plexippus) or pipevine swallowtail (Battus philenor) who derive their toxicity by specializing in deadly foodstuffs. These butterflies have evolved to thrive on plants that are inherently poisonous, subverting the threat of their own host by weaponizing it for personal advantage. However, they are still hunted with impunity by other invertebrates, rodents, birds, and reptiles. Considering that few ever make it to the adult stage, it is rather remarkable that they even survive at all. 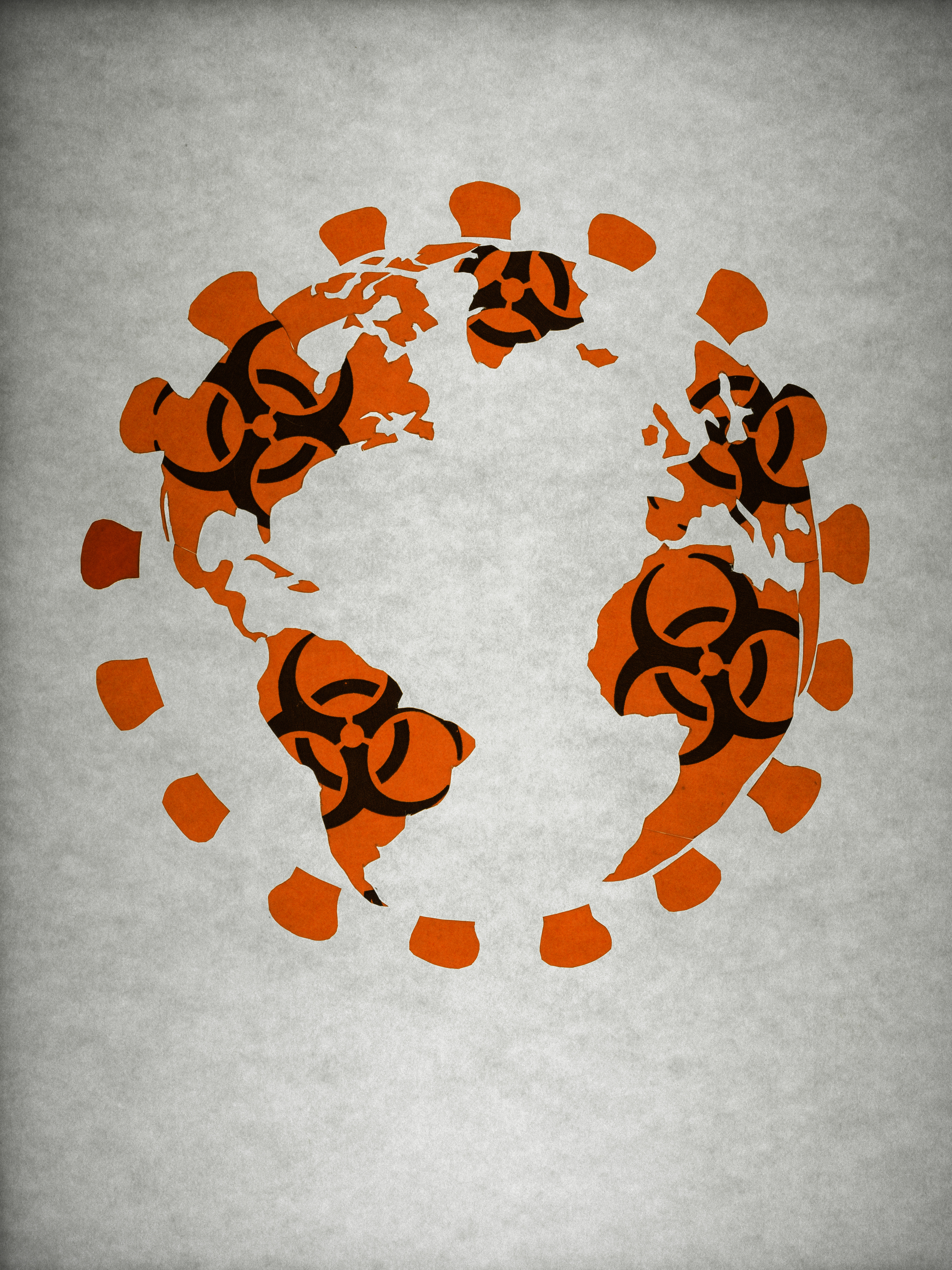 I was the hungry caterpillar in this case, with the odds stacked against me. Weakened physically and psychologically by the pandemic, I was in dire need of protection from the world. I couldn’t escape the virus either at work or at home, so I had to out-manipulate the toxicities of my environment—of a city under lockdown with its citizens dying by the thousands and later, of a country grappling with the not so subtly systemic oppression of Black and Indigenous people of color. During a time when the fight-or-flight response was overwhelming, I needed to switch positions to rest and digest. So I turned on myself and fed on the very things that consumed me. 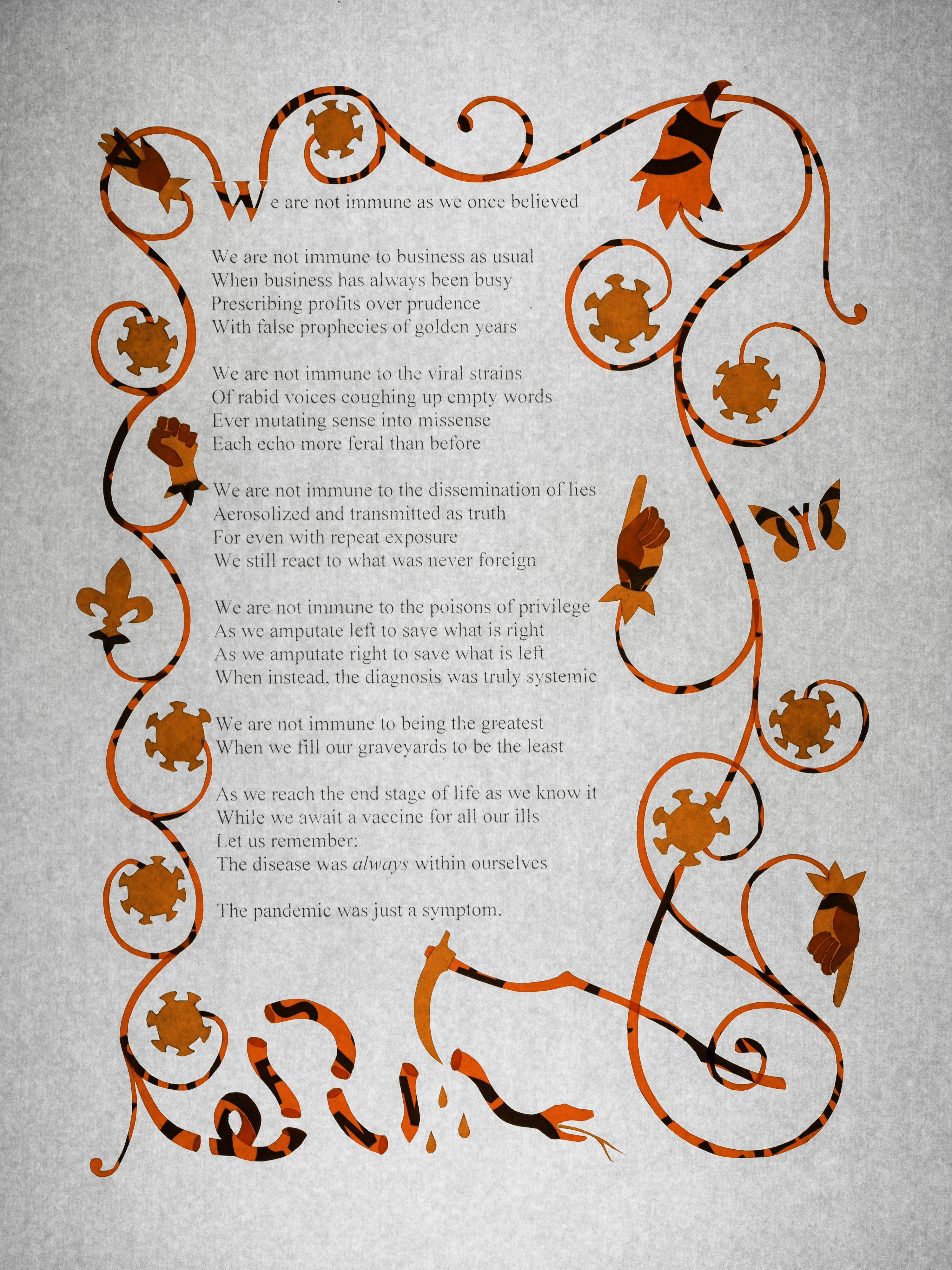 My daily diet consisted of biohazard labels. Every morning after work, I would crawl off into some corner of the bed where I could metabolize my grief and trauma in safety. Indeed, aposematism was also a strategy for creating distance. I could digest my emotions by cutting up the labels, sequester them as an element for metamorphosis by reimagining them conceptually, and ultimately express their toxicity away from myself in the form of visual display. Yet, in the process of digesting the personal, I could also absorb its universalities, synthesizing works that captured the collective suffering and resiliency that intricately brought us all together, apart. 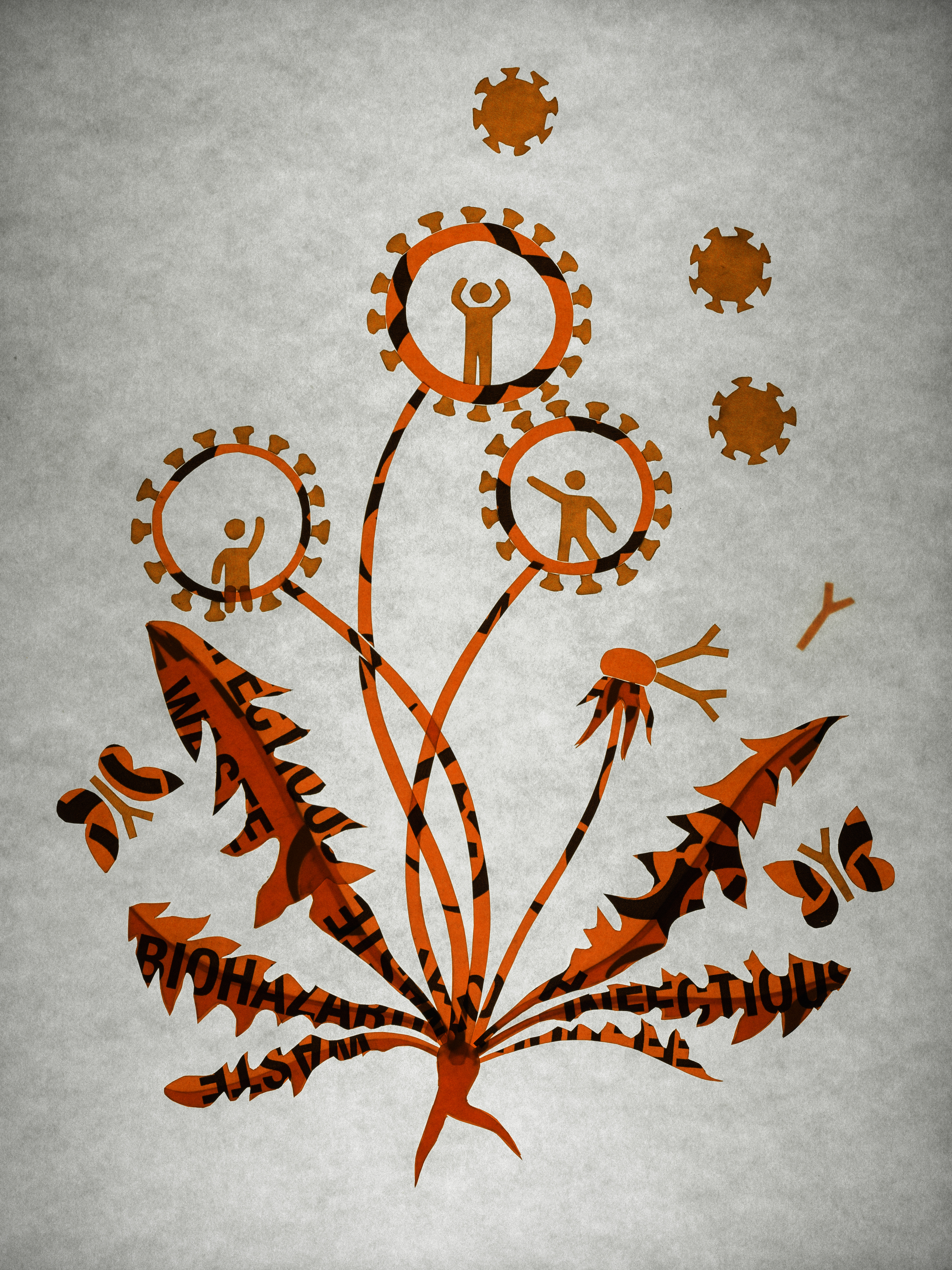 After all, art is an extension of humanity, much like vibrissae or tactile spines. It is how I sense and perceive my world and how I allow others to sense and perceive me. And so I constructed the Biohazard Collection, a temporally responsive series of pieces that doubled as a protective cocoon, weaving elements of public health, mental health, and ecology together to help insulate my transformation. By engaging in the intense alchemy of the creative process, my internalized state was dissolved down to its imaginal discs and reprogrammed. 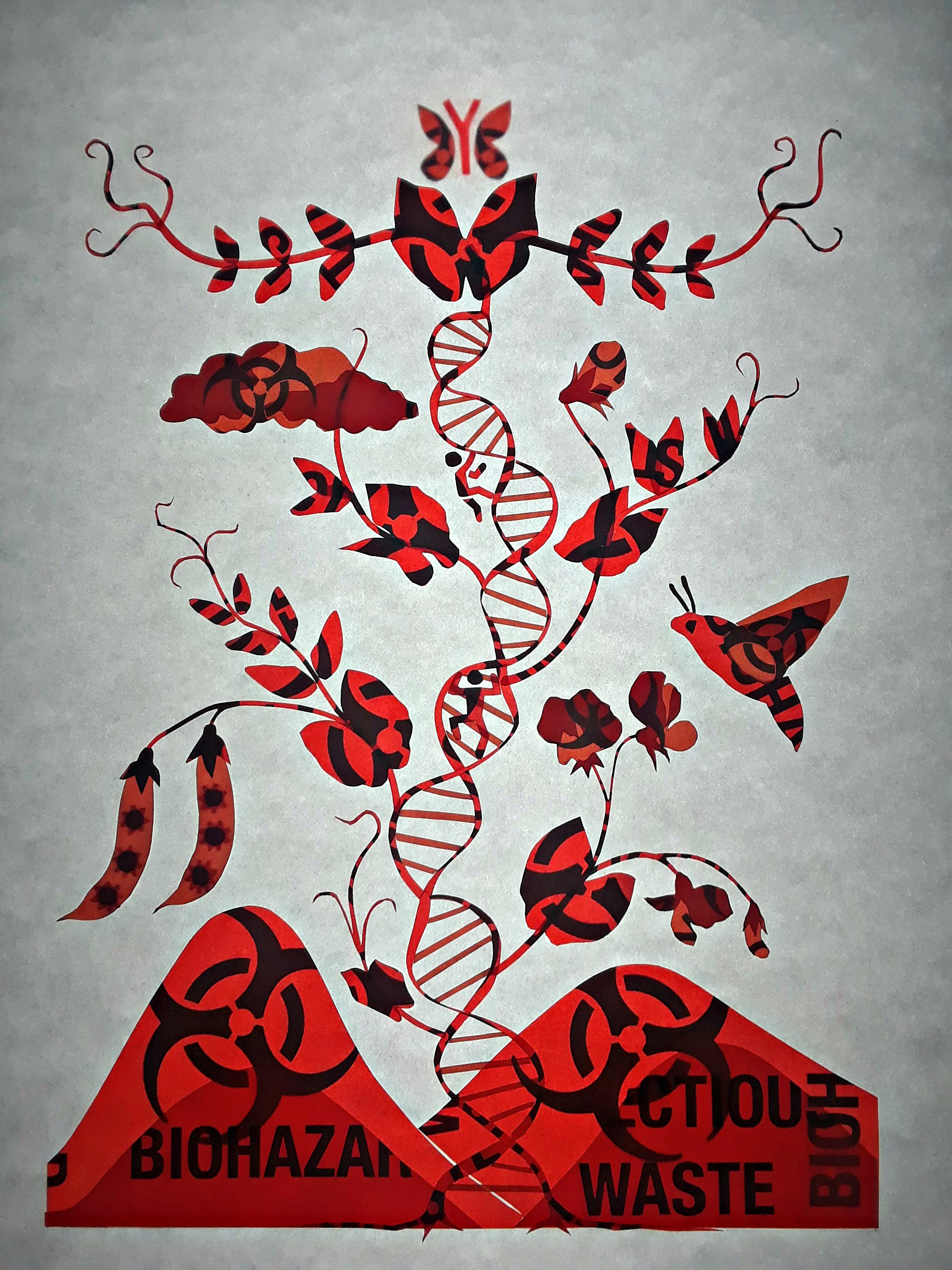 Victory Garden Genetics: The Quest for a Vaccine

With New York City gradually reopening, I have slowly emerged from diapause as well. Whatever grief or trauma that lingers still is minor enough and manageable. Instead, what are shed behind in greater quantity are the vast artifacts of my metamorphosis. Biohazard labels, recognizable yet unrecognizable through collage, still retain their original arresting quality. And while they were spiked with my own poisons by design, they are now entirely safe for even the most unwary viewer to consume. 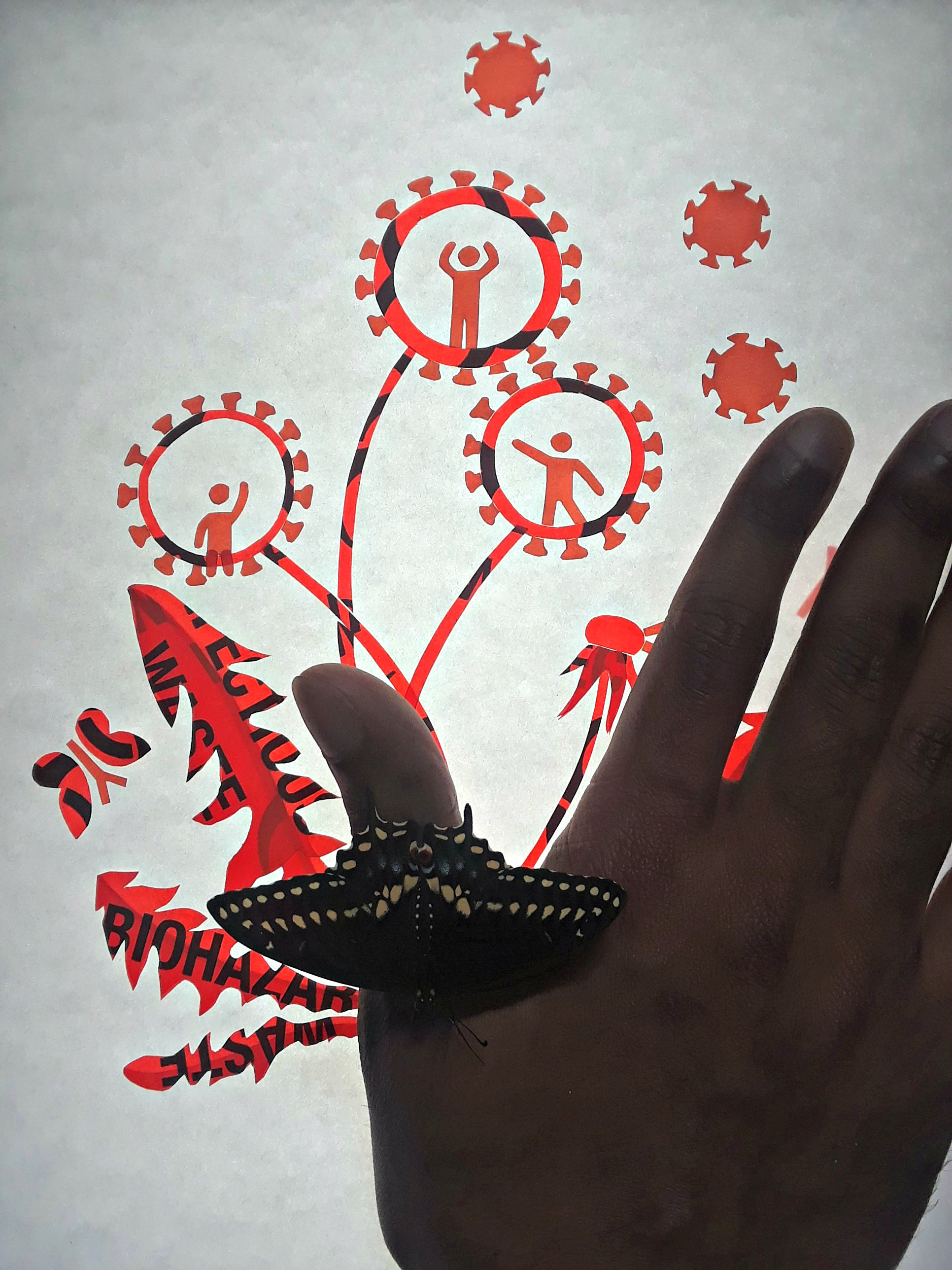 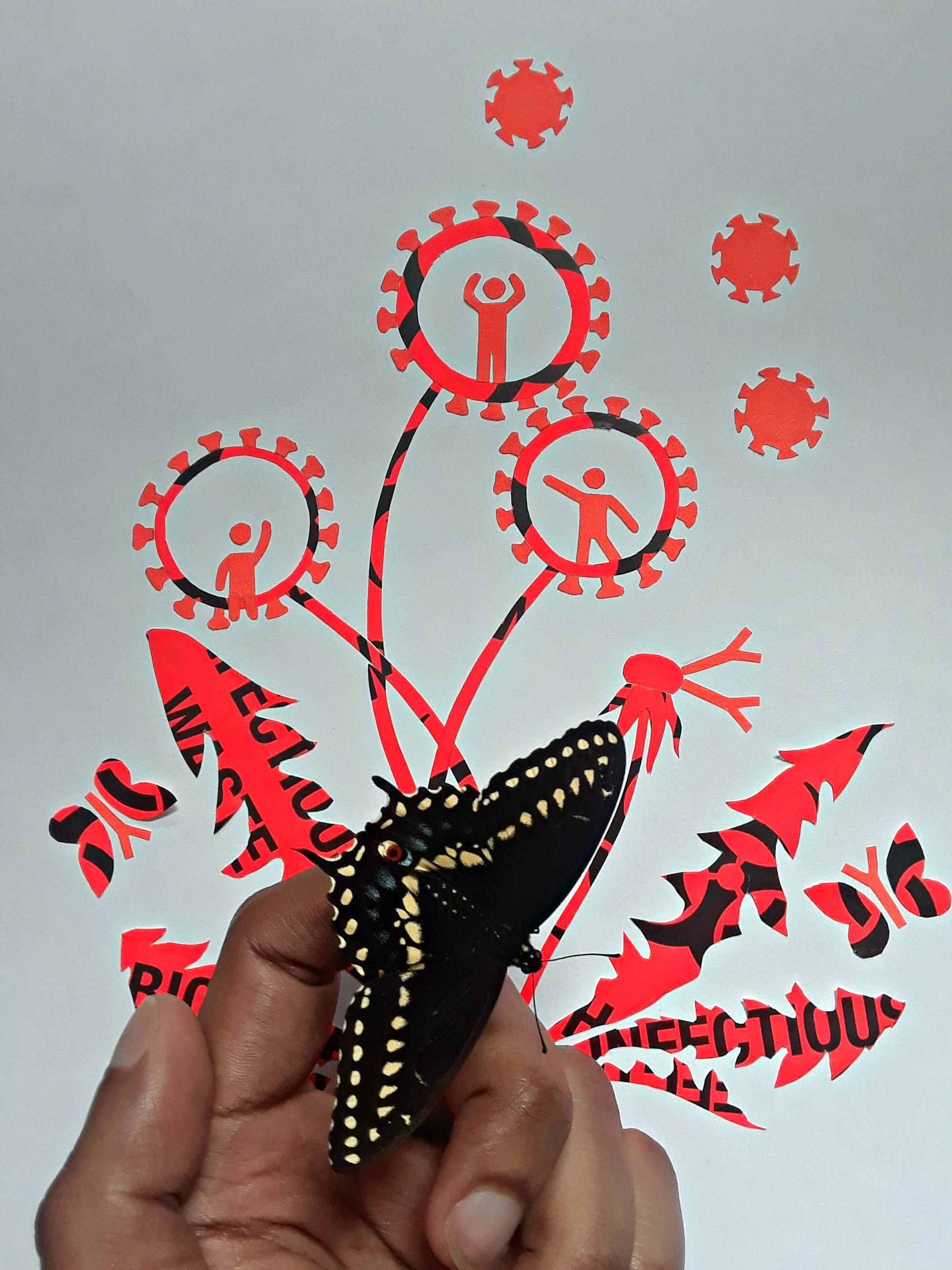 [1] The cytokine storm syndrome is the most dangerous and potentially life-threatening aspect of COVID-19.

[3] This piece was inspired by an eerily quiet yet beautiful walk home one morning after work just a few days before Earth Day. Flowers were blooming and the air was filled with birdsong. I thought of the book by Rachel Carson and how in a strange twist of fate, this spring was silent because the people were gone.

[4] Symbolic representation of the SARS-CoV-2 virion as a dandelion seedhead, both of which spread by being airborne. The dandelion was also a symbol of the concrete jungle, and the adaptation of life to inhospitable conditions.

[5] This was a male Eastern black swallowtail (Papilio polyxenes) who had emerged from diapause on May 28 after a long winter. He had formed a chrysalis back in September or October of 2019. This species is a Müllerian mimic of its aposematic cousin, the pipevine swallowtail (Battus philenor).

Ansel Oommen is an urban naturalist, medical technologist, and horticultural therapist-in-training based in New York City.