I’m an agnostic in all things but nighthawks, for with the bullbat I hold this belief: one cannot pursue the bird directly; rather, one can only seek a trajectory that may someday cross theirs.

My faith in the bird was born amid their southward migration through Denver, Colorado, in September 2015. I’d gone looking for nighthawks in a place where and at a time when I thought it likely I might see one. Common Nighthawks are (mostly) crepuscular; they hunt for flying insects through dawn and dusk. Walking around central Denver’s Cheesman Park after sunset, eyes aimed upward, I found only brown bats. I sat a while, awaiting night, and watched these other things with wings. Then, I left.

In truth, I just readied to leave. I sat in my car and, though it was a Sunday and though it was evening, I compulsively checked my email. A (lengthy) message from my department chair at the University of Denver greeted me. Compulsively, I read it, though I believe one should neither mix time off with work nor birds with the same. Dusk gave way to night. The bats gave way to a still park.

At the end of the email, nighthawks.

A trio, emerging from the nearby neighborhood, furiously pursued insects under the park’s streetlights. I left my car and followed them. Nighthawks, like swallows, feed on the wing, catching insects as they fly. They are strong, agile fliers. I have seen them cut upward, leaning backward as they do, in pursuit of prey. They make micro-adjustments that give them a “tipsy” appearance, as Pete Dunne puts it in his Field Guide Companion. To me, they appear confident in the air. Untouchable, even. Nighthawks always seem to be beyond their human-observer, even when approaching them—a twist of angles always cutting away. Unlike songbirds, which rarely fly directly at people, this trio chased their prey wherever it went, even if it meant flying directly at me.

An arm’s length away, a nighthawk. 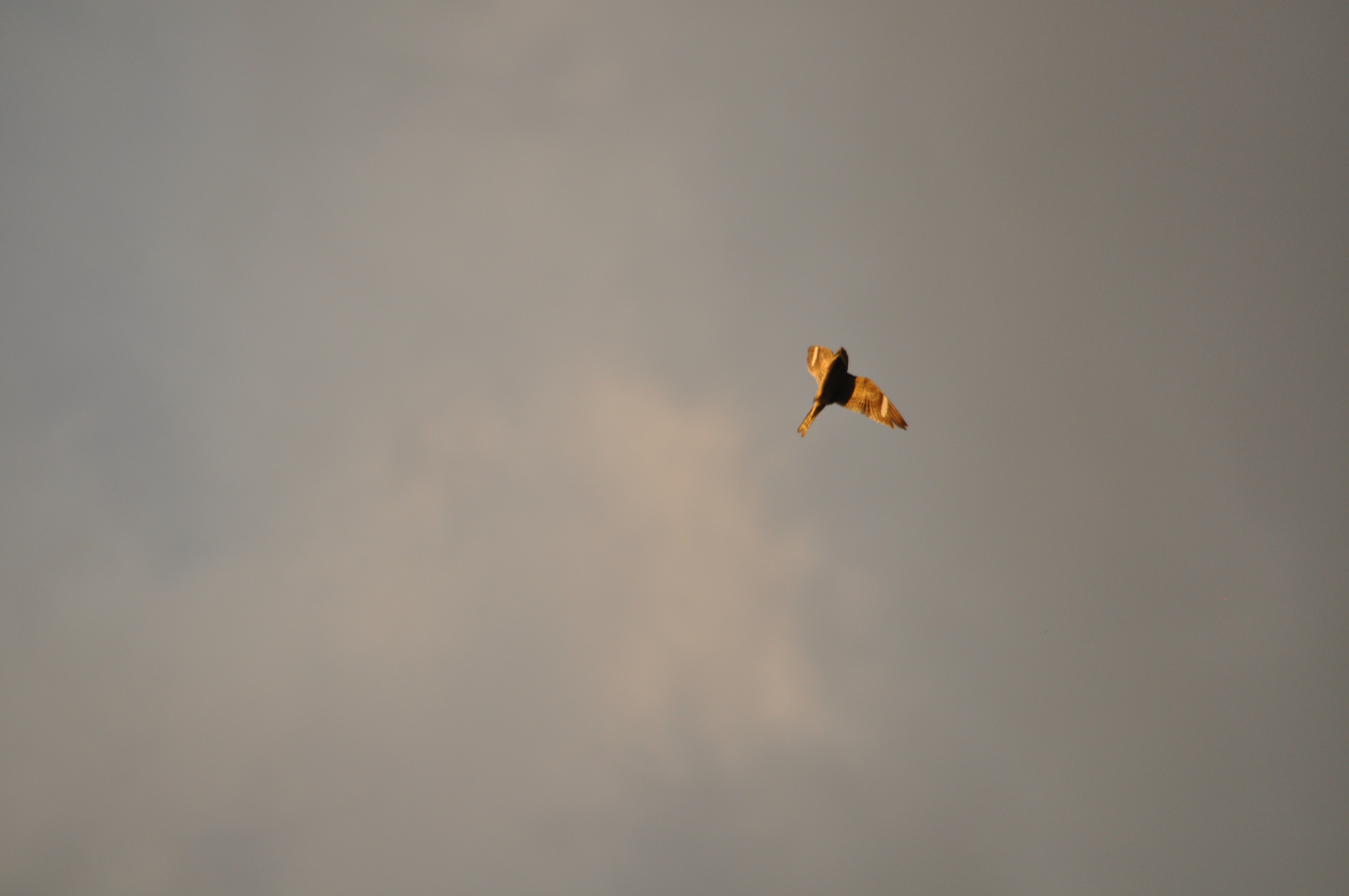 One can only seek a trajectory that may someday cross the trajectory of a nighthawk. I spent this past summer seeking just that. I let my dogs lead me. I indulged every detour and delay. We turned home when they wanted to. We inspected dead ends. We doubled back on trails. We lingered when the dogs wanted to linger. We sat together in fields and on curbs. I suppressed my better judgement of where and when the birds would appear. By maintaining the appearance of not seeking nighthawks, I hoped I could fool serendipity into delivering them.

I did so to try to document the bird’s presence in Centennial, a southern suburb of Denver, during the bird’s nesting season. A mid-June sighting gave me hope. My dogs and I sought the birds above a buggy marsh at a local open space. The setting sun inspired the complex chorus of catbirds, blackbirds, and sparrows. But I missed a simpler sound: the buzz of the bird I sought, the distinct, nasal “peent” of a nighthawk. As dusk deepened, my dogs decided it was time to head back to our car. (One dog is afraid of the dark and what it means in Colorado: wild canids. The other is simply not much for walking.) I obliged, though I wanted to keep seeking.

Nearer to the car, the dogs changed their minds, insisting I let them chase each other around me. Though leashed, the dogs sprinted circles. To keep myself from their tangle, I spun with them. Once, twice, then—and only because the dogs had chosen when to turn back and when to stop for play and when to turn me in the right direction—a nighthawk.

I seek the nighthawk’s trajectory because I measure the world by this bird. They arrive in Colorado late in spring migration, just as that season tips toward summer. They leave before autumn begins whispering of winter. But the bird isn’t just a sign of the seasons. Their presence speaks of the complexity of our climate, the non-human world, and the human/non-human nexus. Obligate feeders on flying insects, the Common Nighthawk’s steep population decline over the past half-century may relate to broader declines in their prey, owing to pesticide use, the warming planet, and other factors. Nighthawks are losing habitat, too. Some of that habitat is their wild habitat of grasslands and forests. But they’re also losing built habitats in urban and suburban environments. Nighthawks use the flat, gravel-covered roofs of many urban buildings as nesting sites. Unfortunately for the birds, most new development forgoes gravel for other materials, such as rubber. (Patches of gravel, installed on flat roofs, are a potential compromise that may support nesting nighthawks. New Hampshire’s “Project Nighthawk” is experimenting with this.)

The fate of Common Nighthawks is tethered to us, in ways that the fates of many non-human animals are. But it isn’t easy to observe our entangled destinies. Nighthawks are not like the chickadees that visit our feeders, the finches and phoebes that nest on nooks around our houses, the corvids that seem more at home around our homes than we do, or the hawks that hunt on our highways. Nighthawks nest on our skylines. They migrate at incredible heights, and the vast majority of these birds pass over our summer and fall activities without being noticed. By day, they disappear into trees, grasses, and rocks. Their cryptic feathering renders them invisible. If you’ve ever lucked into a sighting of a nighthawk on a tree, you know how easy it would be to overlook the bird. You also know that nighthawks don’t care that you’ve found them. Their faith in their camouflage, their use of difficult to access perches, and the fact that they have no need for daytime activity allows them to tolerate proximity to us. 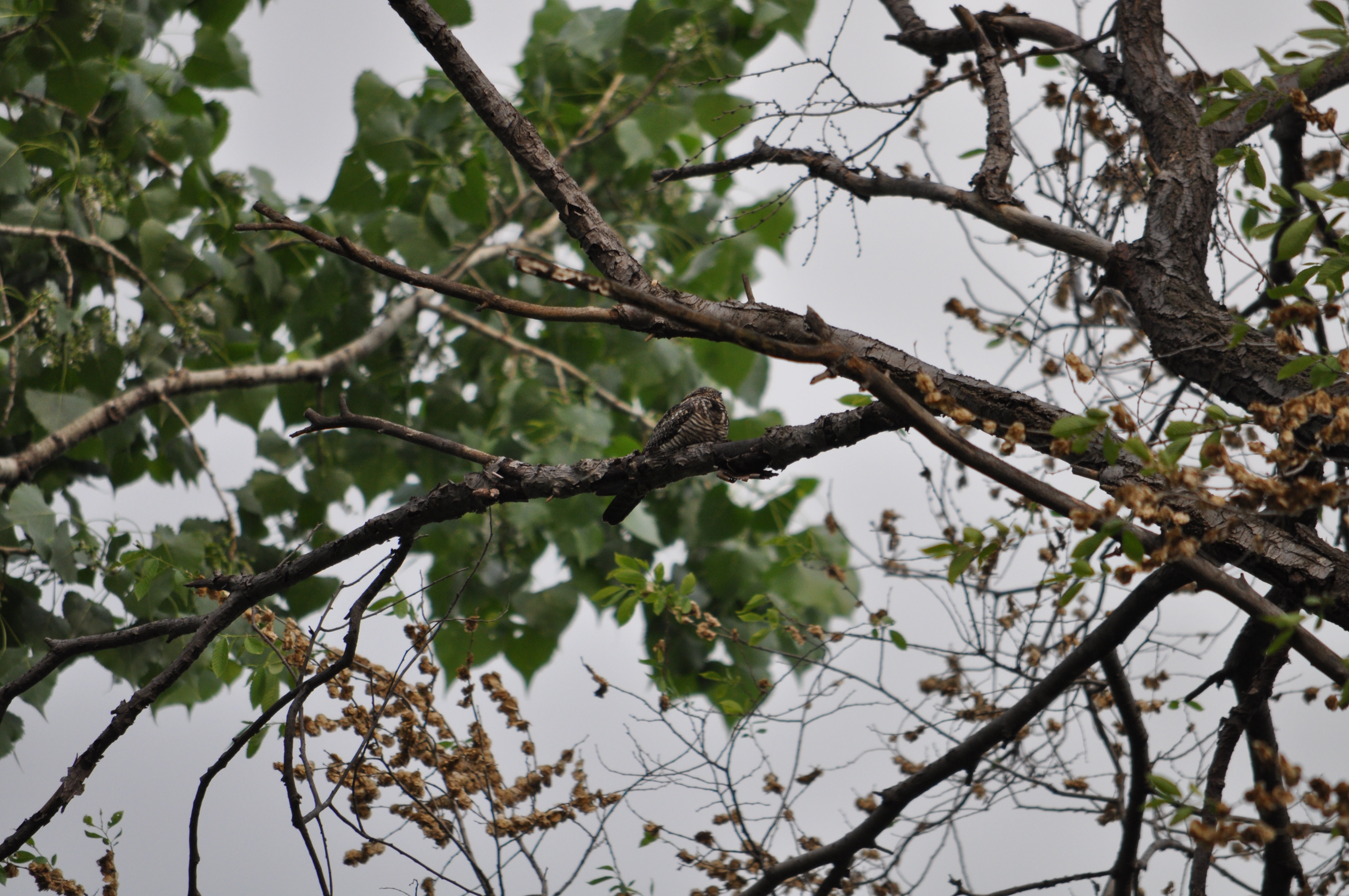 Ultimately, my trajectory and the Common Nighthawk’s did not intersect during their nesting season. Perhaps this is a sign of the species’ decline or of my neighborhood’s hostility, with our grassy lawns and dependence on pesticides, to the birds and their prey. Perhaps it is only that I have not yet found our shared trajectory.

But I have learned something else from this effort. Pursue this uncommon bird, during the uncommon hours of dawn and dusk, and you will find the trajectory of other uncommon creatures. Those brown bats, one of which dropped me to my knees by hunting at the brim of my hat. A raccoon, ambling down a drainage ditch. A coyote, patrolling an undeveloped field. Fox kits, playfully hunting along a neighborhood path. Great Horned Owls, perched in suburban parking lots and cemeteries. A Mule Deer pair, cautiously watching the human animals who ride bikes, and toss baseballs, and walk dogs while seeking nighthawks in fields near riparian corridors. 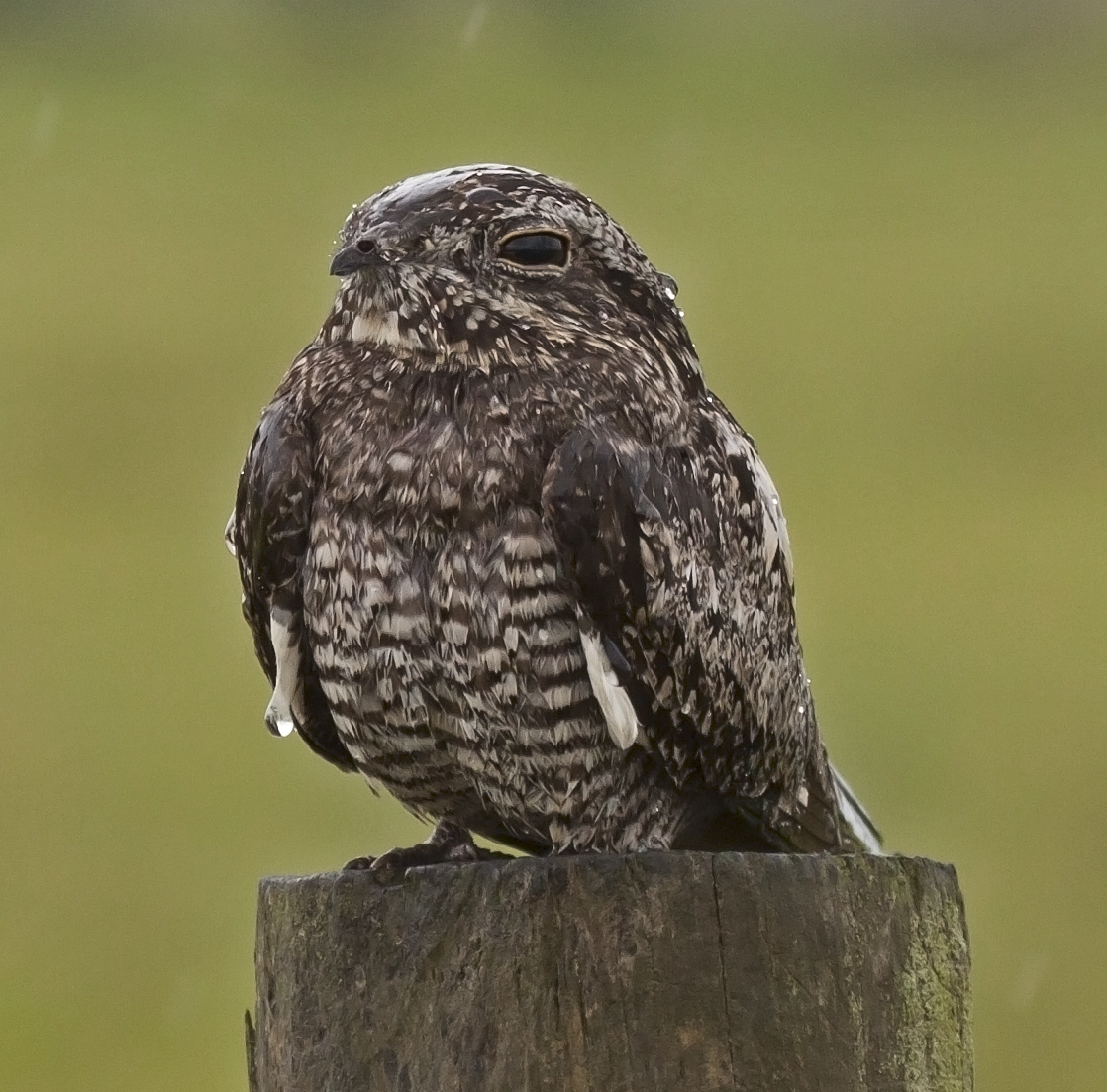 Jared Del Rosso is an associate professor in the Department of Sociology and Criminology at the University of Denver. Among many other things, he teaches courses on urban wildlife. He is an avid birder, a volunteer with the High Line Canal Conservancy, and a semi-professional woolgatherer.