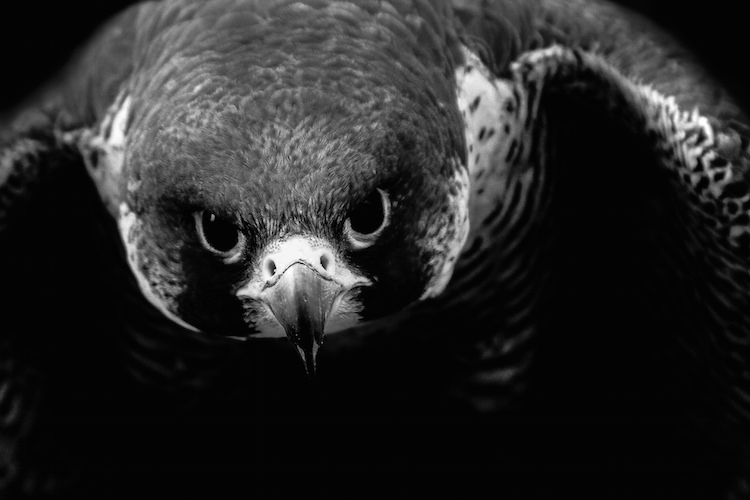 Sometimes there would be a flash of feathers. Other times I’d see something out of the corner of my eye, but then I would turn and it would be gone. Rumors sprang up around the cubicles about a possible bird of prey hanging out near the skyscrapers next to our building. We’d run around the office, grabbing the office binoculars to catch a glimpse of this mysterious bird. Nothing. Again, nothing.

Then one day, a day that started like any other, it was confirmed: a peregrine falcon.

My coworkers and I named him Perry Green. Or her. We don’t know the gender. Perry Green has become the source of much fascination in our office, which occupies the 28th level of a high-rise building in downtown Chicago. Our windows offer a view of the contours of the city—the grid-like appearance of newer buildings, the curlicue features of older buildings—a jagged terrain of metal and stone receding into the distance. 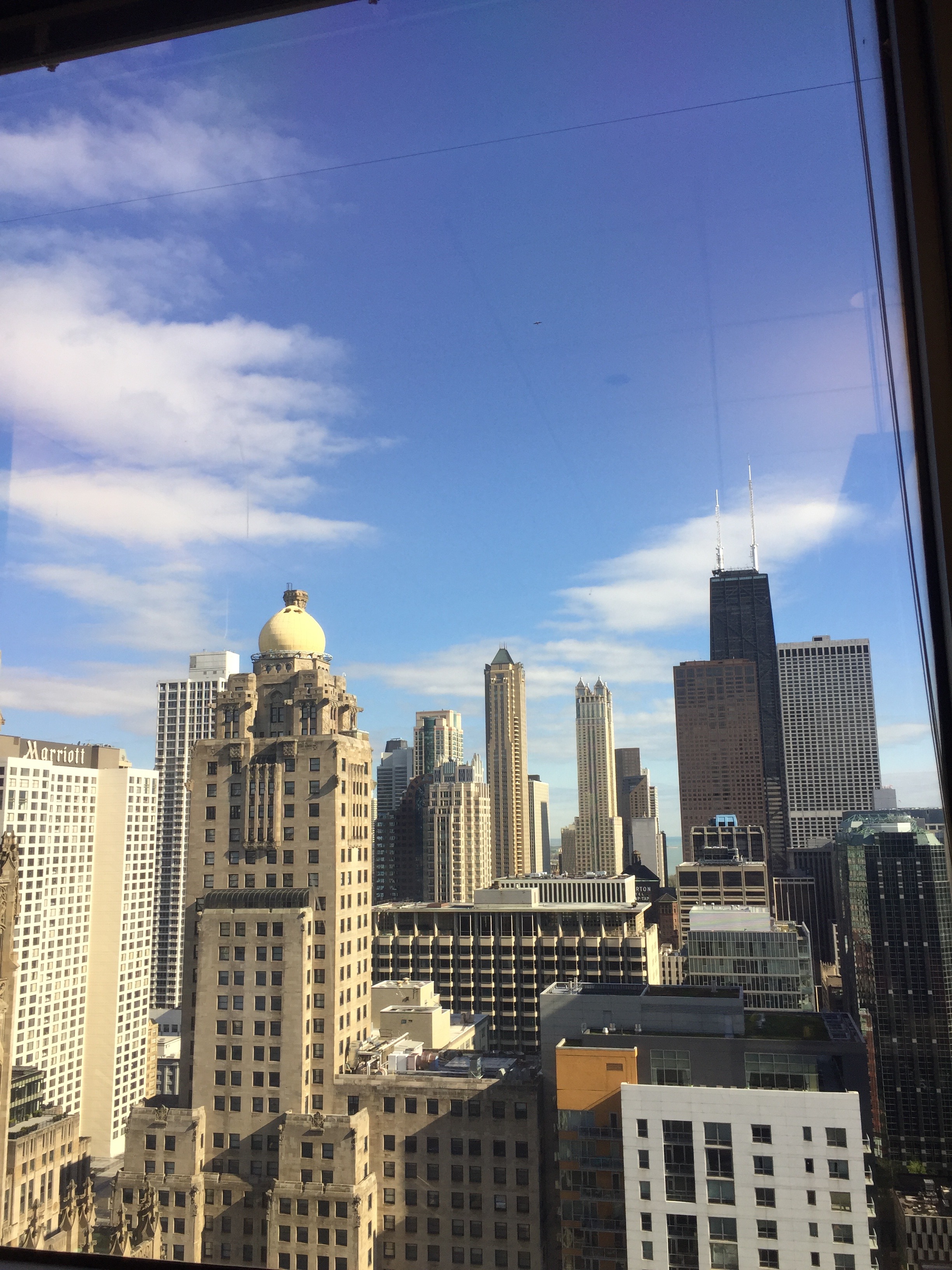 For months I kept catching glimpses of the bird riding the wind near the Tribune building and the InterContinental Chicago hotel (ICC). In October, I brought some binoculars to the office to track the falcon’s movements from my cubicle desk. My falcon-watching built intrigue into my work days. I decided to take notes about the bird’s actions, noting time of day and, as the unseasonably warm winter wore on, I also began recording the temperature.

The notes were sporadic since the bird did not appear every day:

Sitting on cornice of ICC, looking around

I’d occasionally point the bird out to coworkers, grabbing them and thrusting my binoculars into their hands. “Check it out, a peregrine falcon!” Sometimes I could successfully show them where the bird was (usually perched on the ICC). Sometimes the bird disappeared; we were too slow in our birdwatching quest.

Then, on December 1, I thought I saw two birds, not one. I held my breath to make sure that I wasn’t just seeing the same bird twice. Yes! There were two birds, circling in the air around the ICC. I ran to get a coworker, all aflutter at my newfound discovery. As often happens, by the time she got to my desk, they were long gone. My coworkers and I presumed they were a nesting pair, and we stuck with the name Perry Greene, though singular, for both of them.

The birds continue to be active through the first few months of the year. I often spy one of the Perry Greens when he or she is streaking towards the lake.

During a March blizzard, I noted:

Snow storm — flying around, sitting on ICC for 20+ minutes 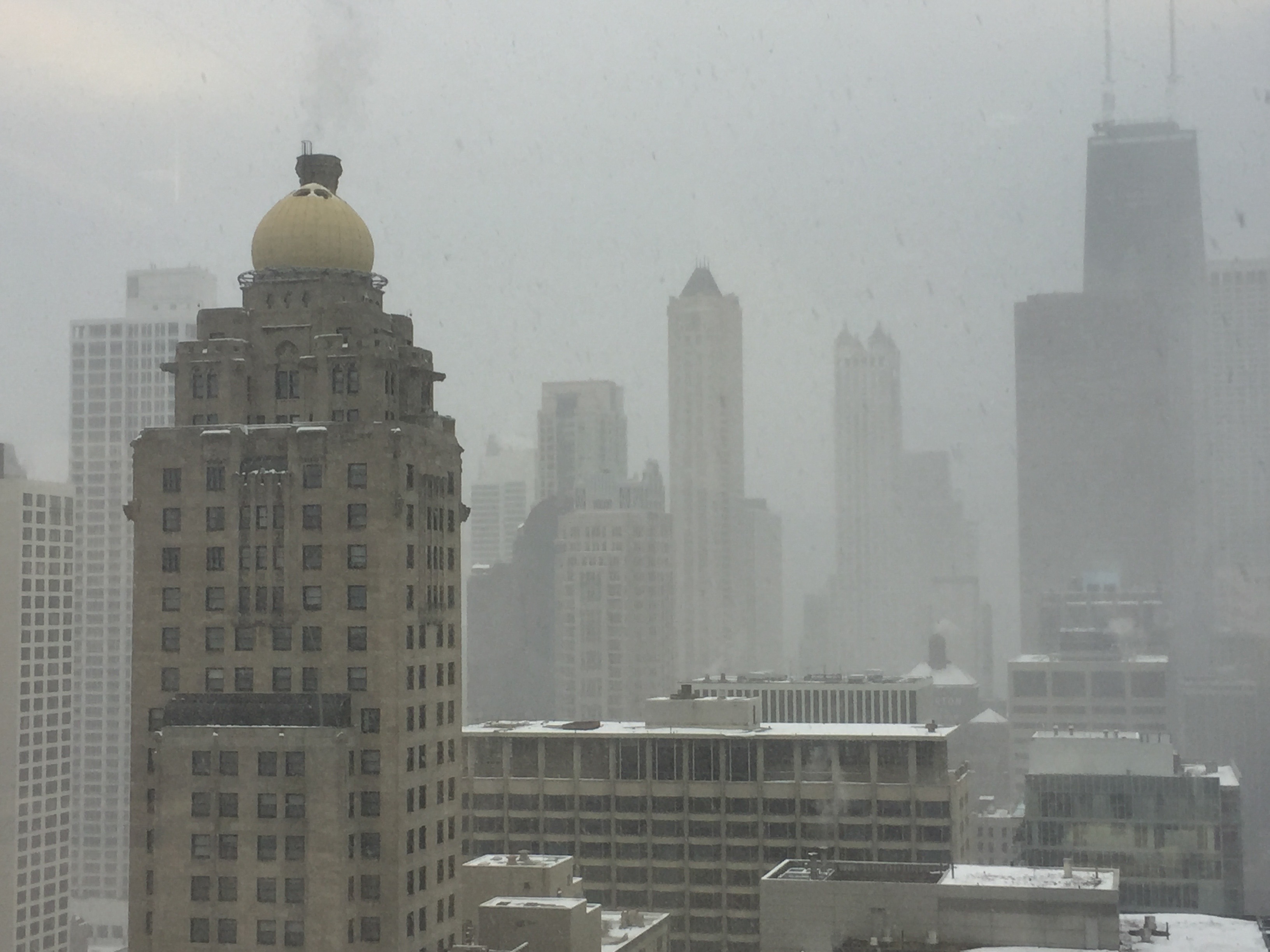 That image is burned in my mind: this majestic bird, acting like the storm was a mere inconvenience, strutting his stuff amidst the howling winds and curtain of snow, while we humans huddled in the office, each of us with a harrowing story of how we got to work.

I’ve been in my current job for a little bit less than a year, and this peregrine falcon is one of the perks along with health and dental insurance. How often can people birdwatch from a desk in a building downtown? It is glorious. But does this explain why I feel compelled to take notes and try to share my exuberance with my fellow co-workers?

Part of my giddiness is due to seeing a species rebound and possibly thrive. Much has been written about the decline of peregrine falcons due to pesticides and encroachment on their lands. To see these animals adapting to an urban environment is beyond thrilling. Another part of my giddiness can be traced to my fascination with birds as a kid. Despite being boxed in a big city, my life dream as a 5th grader was to see a blue jay. I still get a chill when I see a blue jay, even to this day.

On March 23rd, I noticed that one of the Perrys was doing figure eights around the ICC. The next day, as I made my morning walk from the bus to the office on Michigan Avenue, I observed a group of crows foraging in what remained of the wintertime shrubbery. The crows’ proximity might have caused the peregrine’s agitation: Was the falcon protecting a nest from possible predators?

Led by my curiosity, I went to the website of the Chicago Peregrine Program to find out more. They have a map on their website of peregrines in the city, but I did not find any indication of falcons in my work area. I reached out to Mary Hennen, the director of the peregrine program, and asked if she had heard of any nesting falcons just off North Michigan Avenue. She had not. We may have found a new pair of falcons! Mary asked if we could potentially get photos of them. So far, they have remained a bit camera shy.

Seeing the falcons provides me with a glimmer of hope. Maybe it’s not too late for humans to learn to live alongside other species. At least we won a battle to help a species thrive in our brave new world. I revel in the ingenuity of animals who are finding unexpected ways to flourish in our constructed landscape.

But I think there’s more to my feelings than that. I think I am projecting a life onto that bird. What do birds stand for? Freedom? Self-Determination? I’m sitting at my desk, moving numbers around, while this bird dances in the currents of the city. Am I seeing the world from its piercing eyes? Am I king of Michigan Avenue?

All I know is that seeing the bird makes my soul float just a tiny bit more. A single sighting can make the day more special. More spectacular.

Several weeks have passed and I haven’t seen signs of the peregrines. Seagulls float and zoom around the canyons and cliffs of Michigan Avenue. Have the birds moved on? Are they teaching hatchlings to fly somewhere away from predators? Or maybe their presence was a quirk of the strange weather we’ve had this year?

Even if the Perry Greens have found other buildings or new territories, it’ll be okay. For a few months at least, I was with the bird, riding the breeze, seeing the world from another point of view. Maybe even staring back at me, sitting in my desk chair.