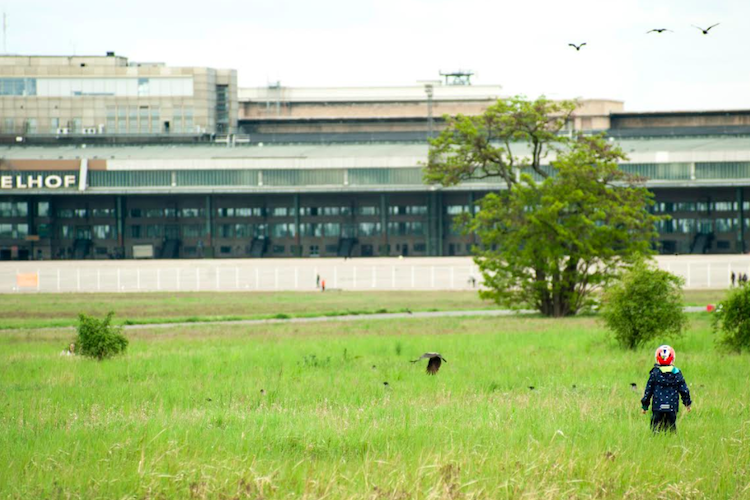 A few summers ago, I went on a third Tinder date to Berlin’s Literary Colloquium to listen to Jonathan Franzen’s open-air reading from The End of the End of the Earth—a collection of essays that invite us to calmly admit that we won’t halt climate change. It was blazing hot. Between my bad comprehension of German and my date’s whispered translations, I interpreted the reading as a defeated call to action: it’s probably too late for humans, but it’s not too late to save species that may survive drastic planetary overheating.

As I later walked through Berlin’s Tempelhofer Feld, I recalled Franzen’s idea that we should attend to nature closer to home and nurture the peaceful coexistence of humans, cities, and nature. Once the site of early experiments in aviation, Tempelhofer Feld is a former Nazi airfield that was expanded in the 1930s under Albert Speer’s command to resemble an eagle in flight, with hangars as spread wings. Tempelhof had its wings clipped in 2008 when the airport was officially closed, and it became the protected home of vulnerable residents, avian and human.

In 2015, vast spaces within a hangar designed to house aircraft were repurposed with neat living cubicles for refugees. The building is protected, too. Like any expensive inner-city rental, nothing can be stuck to the walls without consequence.

But as Toby Parsloe wrote for Forced Migration Review’s “shelter in displacement” issue, residents found ways to desterilize the pristine white interior. They draped blankets and colored sheets for softness and privacy, and covered walls with graffiti, from kids’ drawings to religious symbols and scribbles of gratitude to Germany for offering refuge.

Offensive markings were eventually discovered too, and in April 2016 camp organizers banned graffiti. Afterwards, in a conciliatory souvenir-store gesture towards decorative expression, they stenciled colored prints of Berlin landmarks on the walls.

In the fields opposite the hangar, Feldlerchen (skylarks, in English) take refuge, too. Skylarks are birds of unremarkable appearance that nest on the ground and sing in the sky. They have a modest wingspan of 30 to 36 cm and weigh around 40 grams. If you know your birds, that’s somewhere between a starling and a sparrow.

They’re rivaled only by the nightingale in reputation as the bird world’s best songsters, with a mid-air range of 160 to 460 syllables. Female skylarks prefer males that can sing and hover for some time, demonstrating their fitness for shared parenting.

Skylark chicks have a halo of spiky feathers that look like tufts of short dry grass. They become self-sufficient about two weeks after hatching, but, before that, their ground nests make them vulnerable to big birds and small mammals.

In Germany, Eurasian skylarks are one of the most endangered bird species and need urgent conservation action. Their decline is linked to agricultural industrialization across Europe: planting cereals such as wheat in fall instead of spring makes the crop too dense for skylarks to forage between stems.

At Tempelhofer Feld, scientists cordon off a large strip of meadow between the runways with red and white tape in order to protect skylarks’ ground nests from April to July when they’re breeding. On sunny weekends, they coexist peacefully with thousands of Berliners, who sprawl across the shadeless meadows and runways drinking radlers, a bottled shandy of 50% lemonade and 50% beer.

There’s a chapter in Michel de Certeau’s The Practice of Everyday Life called “Walking in the City” that introduces the idea of desire lines—the dirt paths trodden through the grass in just about any public park that ignore the intended cement thoroughfares. Desire lines are, at most, literal paths of resistance, and, at least, tracks of convenience that defy the structures imposed by urban planning authorities. In Tempelhofer Feld, desire lines are trodden in respectful parallels along the flimsy borders of the skylarks’ protected ground, perhaps representing tracks towards a better way to live alongside nature in cities.

In The End of the End of the Earth, Franzen’s essay “Save What You Love” ruffled feathers because he critiqued the siphoning of activism away from the immediate local dangers to bird populations and towards climate change. Wind farms, for example, may be championed as a panacea by those looking for alternative forms of energy, yet may be devastating to migrating birds. Franzen suggests turning our attention, instead, to St. Francis of Assisi's example: save and love “what’s concrete and vulnerable and right in front of us.”

I think St. Francis and Franzen would be happy to see the tracks skirting the skylark habitat in southern Berlin.

Celia is a writer, editor, and content designer based in Berlin, Germany. She spends her mornings working from the windowsill of a fourth-floor apartment, overlooking a noisy and sunny Hinterhof, and her afternoons wandering through the city's streets and parks.