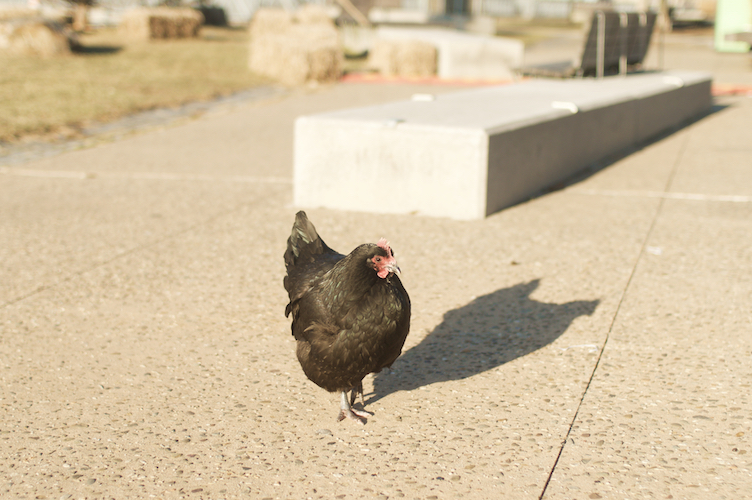 I started my run below Riverside Church, keeping an eye on the cathedral’s steeple, into which I’d followed a peregrine falcon’s vector the previous afternoon. There she was: nearly 400 feet above the ground, perched on a gargoyle, slate-hooded royalty surveying her Manhattan kingdom. 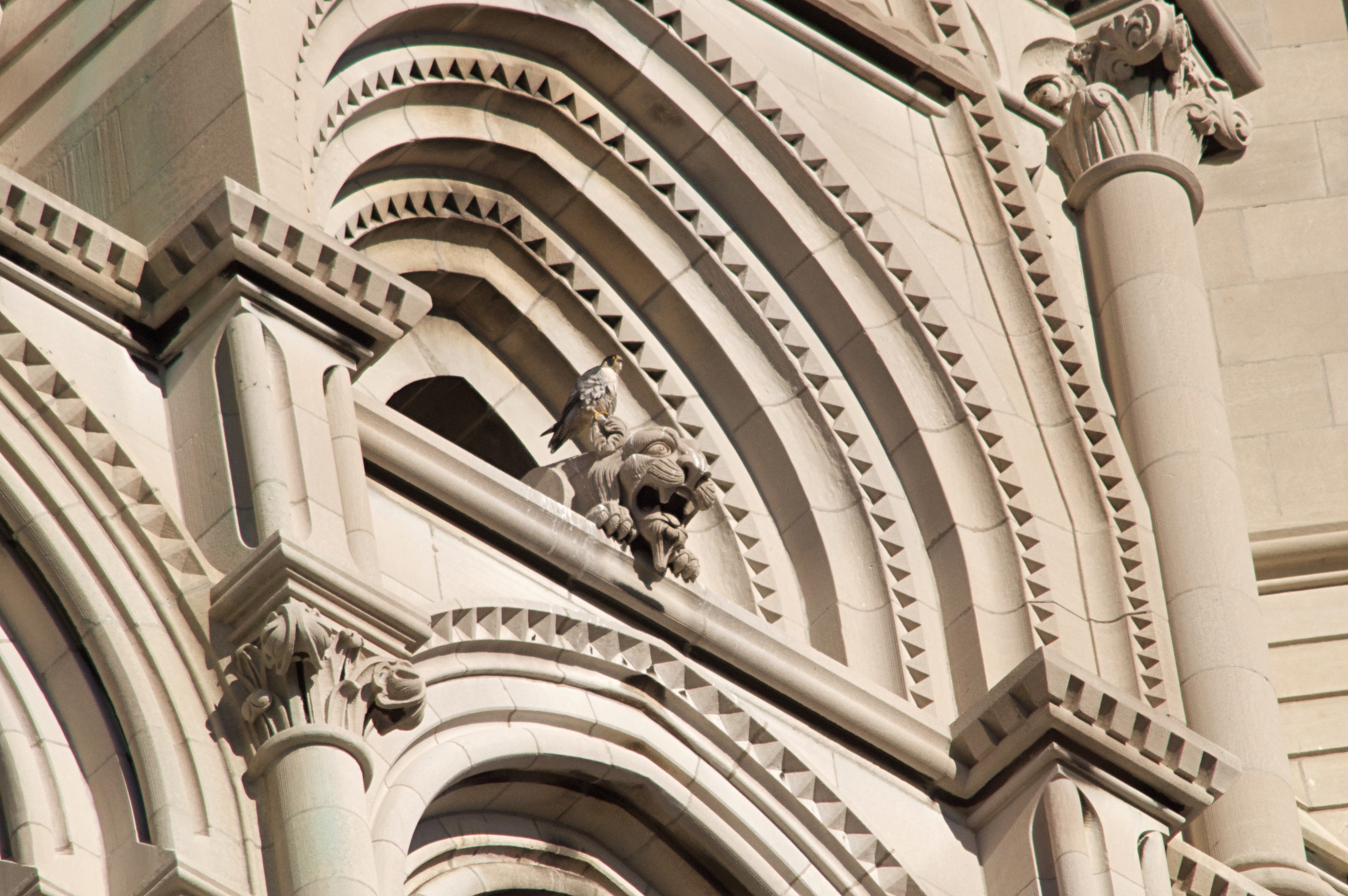 I finished my run beside the Hudson River, in a little strip of park between the water and 12th Avenue. There she was: a chicken, black and round, engineered for utility, pecking in the grass. 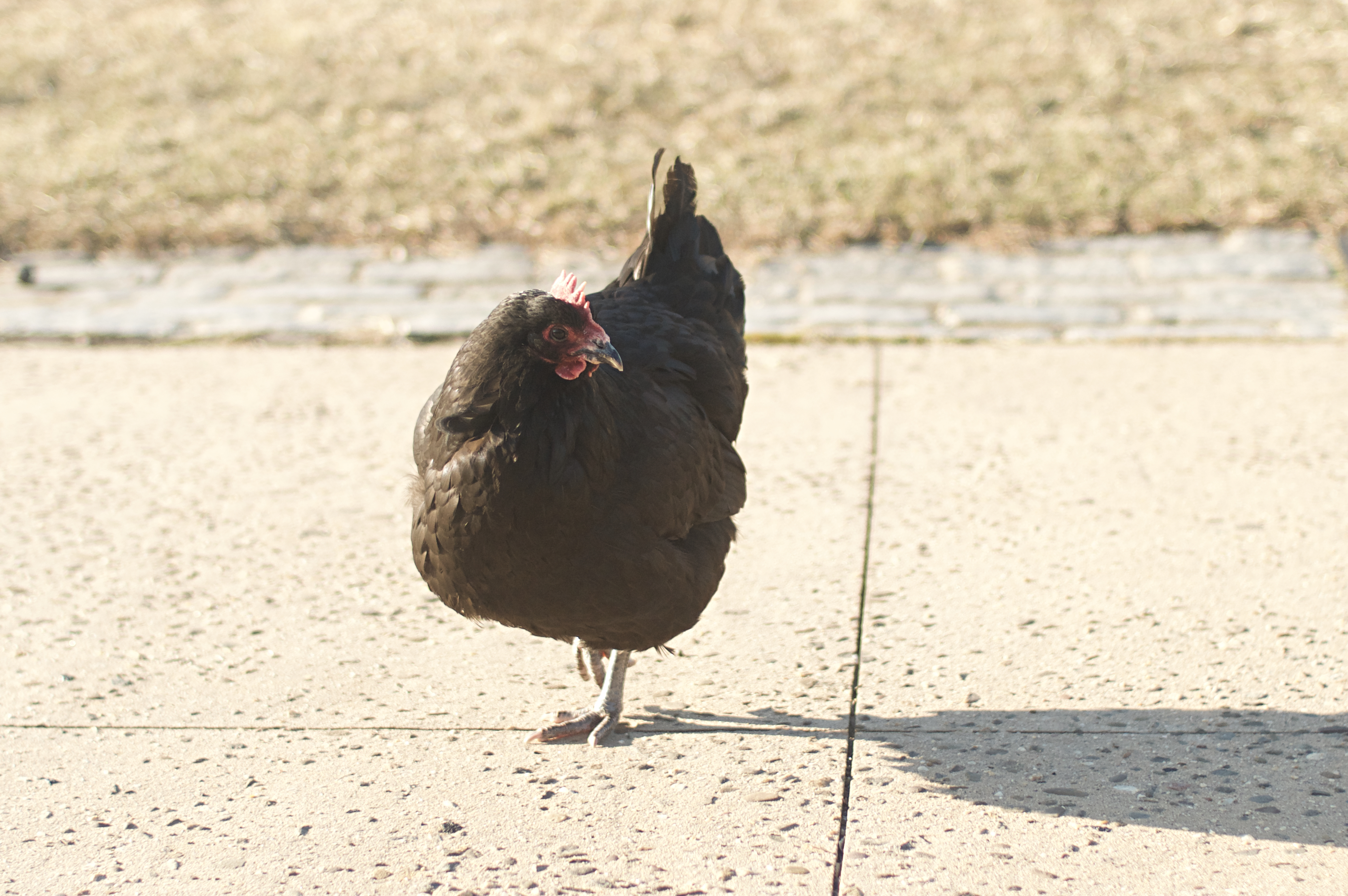 Could a difference be starker? Peregrines, the fastest of all falcons, gorgeous and martial, were nearly erased during the pesticide-soaked mid-twentieth century. Rescued by devoted conservationists, they now flourish in cities, where they’re emblems of urban wildness and animal-kingdom celebrities. Each of New York City’s sixteen mated pairs are known and treasured; people monitor their whereabouts and fret about their hatchlings. Several starred in BBC Planet Earth II’s “Cities” episode.[1]

As for chickens, an estimated nine billion are killed each year in the United States alone. That’s an average of one million per hour; some five hundred thousand on the course of my run. The vast majority live short, miserable, painful lives inside factories, emerging at the end of a supply chain as meat. In a cultural sense they’re barely even considered animals, much less individuals. They’re living units of production. To see one on the outside is to encounter a fugitive.

I thought about calling someone to rescue the chicken, and whether “rescue” wasn’t a narrative hastily imposed upon what actually was respite. I thought about freedom, and also about the risk to her of traffic and conspicuousness and bitter January winds whipping off the Hudson. Did freedom—not some abstract principle but the practical, defined as whatever this bird felt like doing—outweigh those risks? 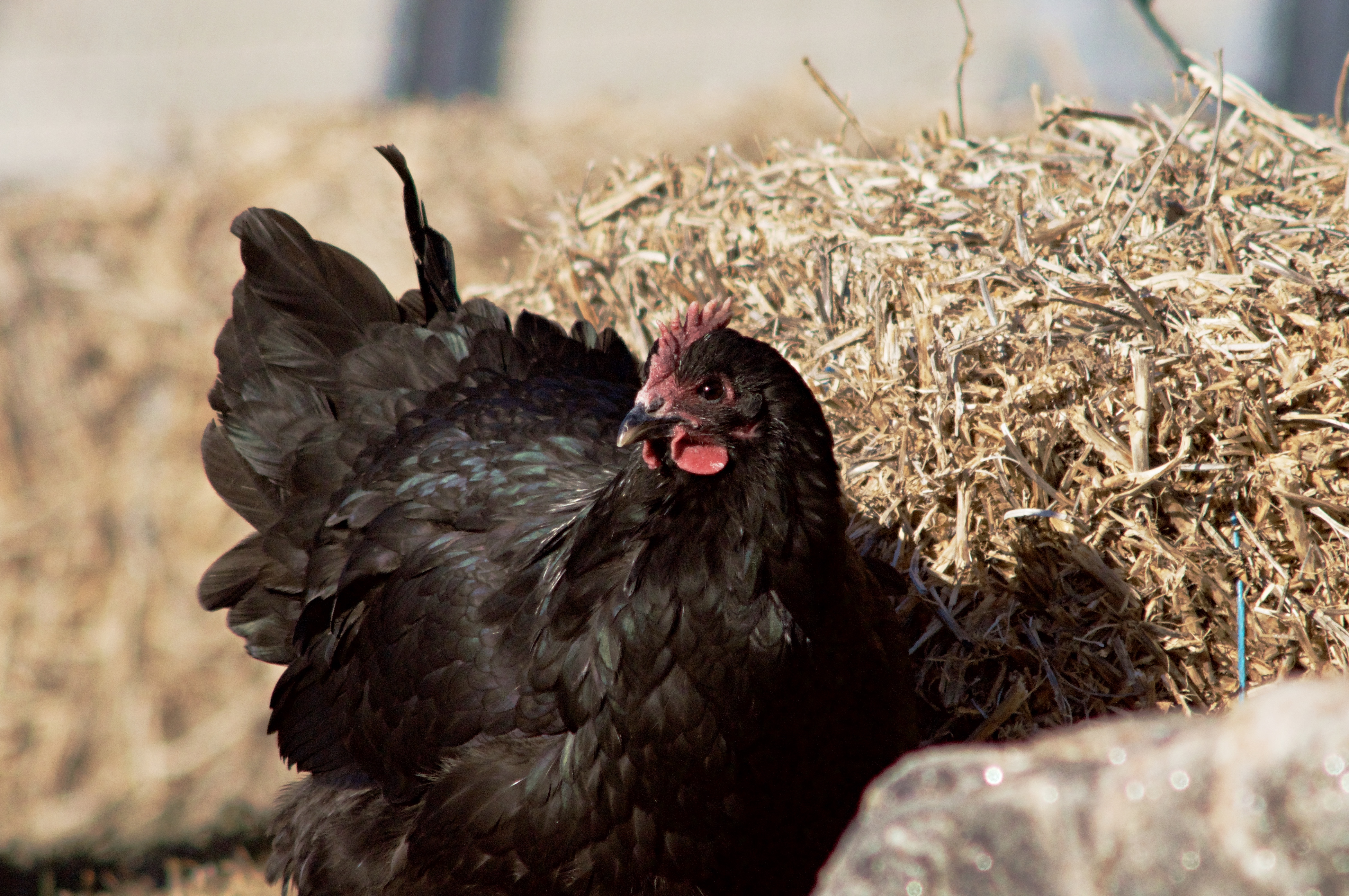 And what about the need for companionship? Chickens are very social beings.[2] Would this one make friends with local pigeons and Canada geese and gulls? And set against that, the threatening likelihood of some local human wanting a more authentic dining experience or to save some money or just have fun at her expense.

Back at a friend’s apartment, I did some Googling and dialing. The chicken was an Australorp, per Wikipedia “developed as utility breed with a focus on egg laying.” The Wild Bird Fund, a nearby wildlife hospital, would take her in. The Urban Park Rangers, a branch of the city’s parks department, would bring her there. I grabbed some sunflower seeds and headed back to the chicken.

The chicken ate them. Every few minutes a jogger or pedestrian would do a smiling double-take and snap some photos. There was something slightly marvelous about her: not just the appeal of an unusual animal, but the sense of a creature having crossed into our world from another. Sometimes she wandered toward the street, and then I’d herd her back and scatter more seeds. 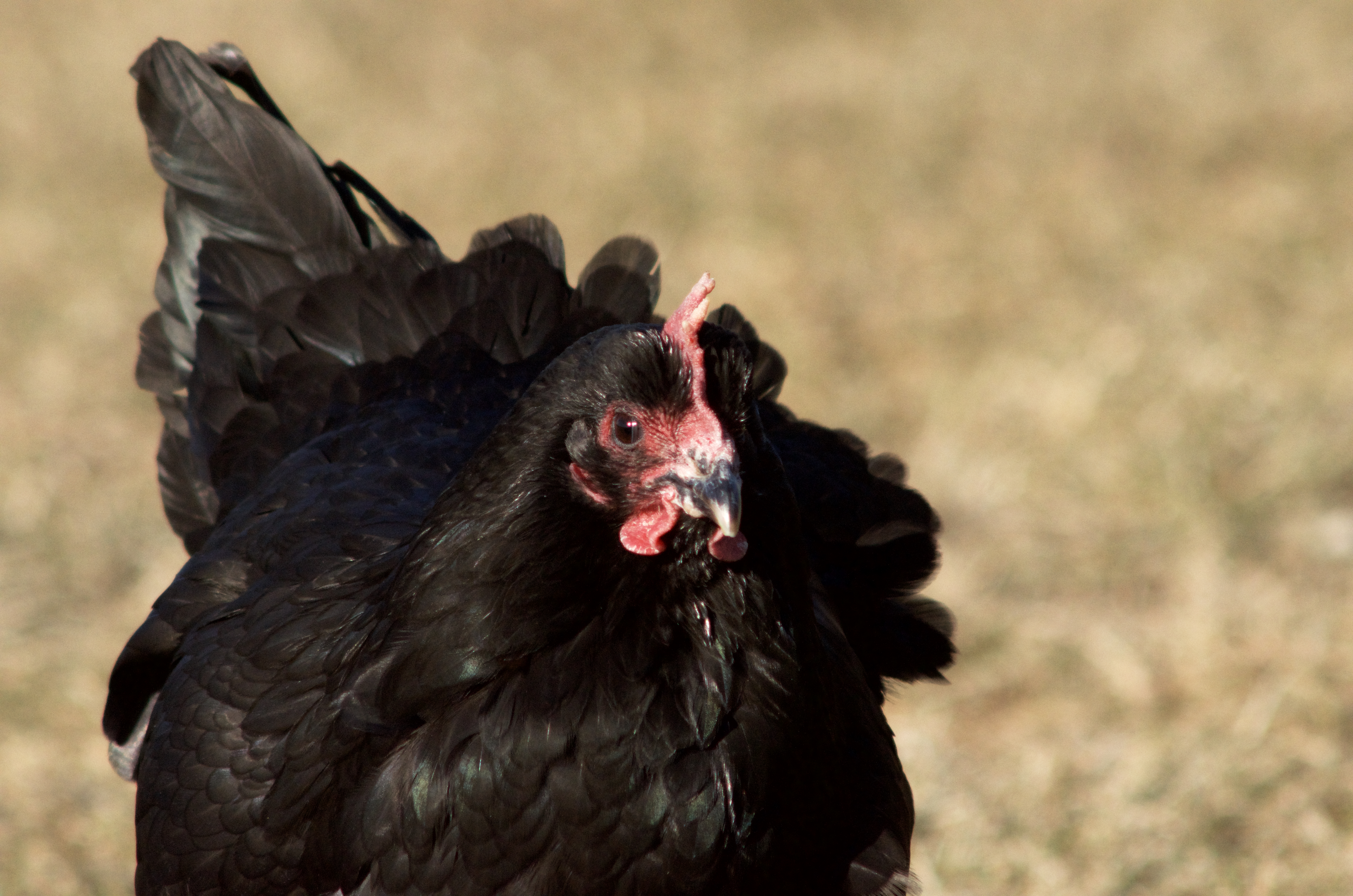 When the rangers arrived they found a chicken shit-stained box hidden in the tall grass. Someone must have released her, though they could hardly have expected her to survive there. Maybe they didn’t have much time. I picture a merciful delivery-truck driver taking a detour en route to one of the city’s slaughterhouses or live-animal markets, or a neighborhood kid who couldn’t stomach the thought of a friend becoming dinner.

It took some chasing, but the rangers caught the chicken. They drove her to City Wildlife. On the way home I stopped to photograph the falcon, still on her gargoyle and tinted gold by the afternoon sun. A few days later City Wildlife emailed to say that, apart from a few missing feathers, the chicken was fine and would soon be transferred to a farm sanctuary. There she’d live out her days in peace. This chicken would, in her own way, fly with the falcons.

[1] Anyone interested in New York City’s peregrines, or falcons in general or simply beautiful writing, should check out “Behavior of Peregrine Falcons in the New York City Region,” a paper authored by ornithologists Richard and Katherine Herbert and published in 1965 in the journal The Auk.

The Herberts chronicle in fascinating, loving detail—“No two individuals nor pairs were the same in behavior. No two pairs, it seems, had the same problems. Each eyrie was a world of its own, distinct in pattern”—thirty years of peregrine observations in the Hudson River Valley. During this time, the falcons almost entirely ceased breeding, as did falcons throughout the continental United States.

Among the proposed causes were continuous persecution—by pigeon fanciers protecting “their” birds, by falcon fanciers looking to possess the birds for themselves, by people with guns—and also the newly-ubiquitous pesticide DDT. Later scientists learned that DDT thinned eggs and killed embryos; at the time of their publication the Herberts were not yet certain about DDT’s role, but their work helped identify it and drew public attention to the peregrines’ desperate plight.

[2] For more about the intelligence, emotions and inner lives of chickens, see Barbara King’s Personalities on the Plate or The Someone Project’s “Thinking chickens: a review of cognition, emotion, and behavior in the domestic chicken.”

Brandon Keim is a freelance journalist specializing in animals, nature and science, and the author of The Eye of the Sandpiper: Stories From the Living World. Connect with him on Twitter, Instagram and Facebook.