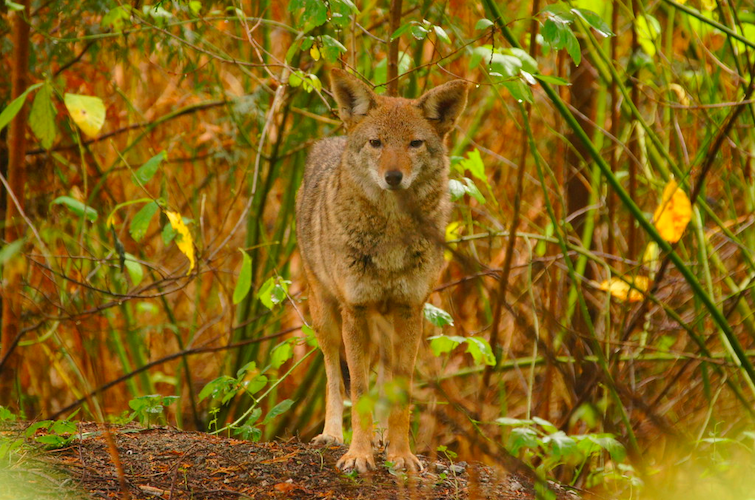 “WANTED!” the Chicago Sun-Times headline screamed on the morning of January 11, over a stock photo of a large and very healthy looking coyote. The day before, a six-year-old child had been bitten repeatedly by a coyote on the grounds of the Peggy Notebaert Nature Museum, an institution devoted to Chicago’s unique natural history. A second reported biting incident was under investigation at the time of this writing.

The language of many headlines related to these incidents conjured an army of aggressive and intentional villains. News outlets as far afield as the New York Post proclaimed: “Coyotes attack 5-year-old boy, grown man in Chicago”[1] (note: the boy is six, and there is not clear evidence that more than one coyote was involved). News outlets like CBS Local referred to “wild coyotes” as “on the loose,”[2] descriptors which are unneccesarily sensationalistic; coyotes are by definition wild, thus would not be expected to be anything but free-roaming. Notably, the second biting incident, which as of this writing has not been verified as a coyote bite, has been repeatedly reported as though it were confirmed,[3] with at least one story repeating twice that the man had been bitten, without noting that this was unconfirmed.[4] The tenuousness of this claim may be suggested by the report of another news story, which stated, “A man walked into the emergency room at Northwestern Memorial Hospital with a scratch on his behind… He told police a coyote bit him.”[5]

The primary reason the incident is so noteworthy, other than the concerning harm to a child, is that incidents of coyotes wanting to interact with people in any way at all are extremely rare. In fact, as of this writing (1/11/20), the Urban Coyote Research Project was still reporting there had never been a single confirmed Cook County (the county in which Chicago is located) instance of a coyote biting a human.[6] Between 1960 and 2006, there were only 53 coyote attacks on people in the United States and Canada that could be considered predatory in nature, amounting to less than one per year in over 7 million square miles of U.S. and Canadian land mass. [7] And none of those were in Illinois.

While many news outlets have responsibly reminded the public that coyote interactions of any kind are rare, and attacks nearly unheard of, research suggests that readers’ perceptions are conditioned by the headlines and leading sentences of a story.[8]

The frames that have been applied to this incident are drawn from a very old set of stories we tell ourselves about the wild and our relationship to it. This individual coyote (as it seems increasingly likely to have been) has tapped a well of ambivalence and fear that have long been applied to a larger and even more controversial canid cousin, the wolf.

As many have documented,[9] few species have as much in common, socially, as wolves and humans. Especially in European-descended colonial cultures, familiarity has bred a rare mixture of awe, contempt, competition, and fear. To navigate and articulate this deeply fraught relationship, many persons have developed a rich liturgy of stories, myths, and beliefs, only some of which have cores of empirical truth. Doug Smith, Gary Ferguson, and others have argued that “no other animal on the face of the earth has had a more vigorous blanket of mythology laid upon it.”[10] And it is this same repository of myths that have been evoked in the reporting of the January 9 incidents. Here are a sample of some of them:

1)  Coyotes are “invading”; their numbers in our area are exploding. On Wednesday, CBS2 prefaced what was otherwise a story focused on the long history of coyotes in Chicago with the statement “it may seem like they are everywhere lately…”[11] Block Club Chicago reported on Thursday that there had been “multiple other sightings this week.”[12]

Throughout the history of coyote-human coexistence in North America, going back thousands of years, coyotes have been urban residents.[13] Coyotes have spread from traditional territory in the west to the eastern United States, but their numbers in the Chicago area have been increasing rather steadily. The number of nuisance calls for coyotes in the Chicago region has remained stable since 2000,[14] and sightings have remained relatively consistent as well.[15] Moreover, as more agricultural land has been converted to suburban sprawl, coyote numbers in outlying areas come under greater pressure, perhaps leading to more frequent sightings. And “multiple sightings this week”? Yes—just like a typical week in Chicago, if the reports at CoyoteMap.com are indicative.[16]

2)  Coyotes are aggressive and seek out human interaction. The New York Post article described the coyote “ambushing” the boy outside the Nature Museum. Merriam-Webster defines “ambush” in the following way: “to attack by surprise from a hidden place, to waylay . . . to lie in wait.”[17] There is no evidence that the coyote was lying in wait or hidden; the Sun-Times article said the boy “ran up a hill a few steps ahead of his caretaker and came face-to-face with the coyote, which attacked.” The boy may have surprised the coyote as much as vice-versa. And if he ran, he likely inadvertently activated a chase response from the coyote.

3) Coyotes regularly target pets for predation. In the wild, coyotes’ diets consist primarily (depending on the specific ecosystem) of small mammals (up to rabbit-size), birds, and scavenged meat. All but the smallest dogs are too large to be attractive prey, although feral cats may be more attractive targets and large dogs can attract investigative behavior by coyotes. The Urban Coyote Research Project recommends keeping pets on leashes when walking in parks[18] (even if your dog is small enough to look like prey, you are likely not), and not leaving cats and small dogs outside unattended—but that is good advice generally, coyotes or no.

4) Coyotes hold grudges. Aside from being empirically inaccurate, many of these arguments contain a logical flaw as well: they inaccurately attribute human motivations to other animals, projecting psychological traits upon them that are far more pronounced in humans than in other species. Research suggests that coyotes, wolves, and other canids clearly feel emotions and reflect many social traits that humans prize. But they cannot afford the luxury of other human endeavors, such as holding grudges or taking pleasure in violence for its own sake. In the wild, coyotes and many other predators take huge risks every time they want to feed themselves or their families. They have no energy to expend on frivolous violence, and such tendencies are not advantageous to survival.

If we leave human motivations aside for a moment, what can we learn about the possible motivations behind this particular coyote’s actions? It has been implied the culprit is the limping coyote videorecorded several places in the Chicago neighborhood of Streeterville before being captured on Thursday. Try to think like a coyote for a moment. You are going into the toughest part of winter with one leg so badly damaged it is almost non-weightbearing. Coyotes bear more weight on their front legs than on their back, so the rest of your limbs are having to pick up a good deal of extra weight. You’re off balance. Your gait is awkward and probably making your other joints sore. If this seems like a rough way to exist, the video footage of this individual bears that out; he looks terrified as he tries to find cover in the concrete canyons. A coyote in distress, suddenly encountering a child who’s similarly surprised, may have had a range of responses—an aggressive response to a perceived threat, instinctual pursuit of what appeared to be a prey target, or something else altogether. But whatever the response was, it was not, from the coyote’s perspective, either vicious or savage. It is, however, something we must try to understand to prevent.

Why must we try to understand? Why not go into lockdown (as two schools in Lincoln Park did Wednesday), or take a less congenial stance toward urban coyotes? I would argue there are real dangers to the way that this story has been covered in its first days.

The coyote, like the wolf, is a bellwether of our ability to be in community. In polarised political times, when social media can offer the illusion of living in a reassuring information bubble, we can forget that what makes community work is the acceptance of even those members whose presence is inconvenient, who do not think as we do, but who we still recognize as having a right to exist alongside us. Community is that spirit that grows from an understanding of our place within something larger, not in order to harness it exclusively to our ends, but because we relinquish that burden. And we understand that being in such a place together is infinitely less terrifying than going it alone.

Coyotes test what decisions we make when we cross paths with those who are different, those who are less cunning (because no one is more wiley than Homo sapiens), those who are less acquisitive. How do we treat them? How would we want to be treated? And if we violate that golden rule, what world are we creating? Hobbes’ state of nature is not, I suspect, the version to which most aspire.

In Decade of the Wolf, Gary Ferguson suggests that:

No matter where any of us might lay our heads down tonight, we can drift off to sleep knowing that [the] wild ... is still out there, still thrumming. And when we wake up tomorrow morning, here will be the comings and goings of elk and wolves and grizzly bears and bald eagles and pronghorn and wolverines—each species, if thoroughly considered, raising the simple idea of making a living into something close to poetry…. [I]t isn’t life span or disease resistance or breeding strategies or pup survival or pack lineages that matters most. It’s having made allowances for these last great waltzes of the wild.[19]

Gavin Van Horn and others remind us that coyotes allow us to know, in the most domesticated landscapes on earth, that the wild is not only “out there” but in us.[20] It is our legacy and our trust. Coyotes almost never cause unavoidable conflict with humans. As they heighten our senses, beckoning us to pay closer attention to that shadow at the edge of our vision, they cause us to move through the world as we’ve evolved to, with all our senses fully present and engaged. Their presence and success amongst us should prompt us to try to better understand our nonhuman neighbors, and to do what coyotes do: adapt to a living city.

[4] Several media outlets, such as WGN,  more responsibly reported the second incident as under investigation. See for instance “Second Chicago Coyote Attack Under Investigation” January 9, 2020, https://wgntv.com/2020/01/09/second-chicago-coyote-attack-under-investigation/ (retrieved January 11, 2020). The same story incorrectly stated that the Nature Museum incident happened with an adult present at the side of the child—implying that the coyote was willing to act even in the clear presence of an adult human.

Bethany is a Professor of Political Science and Director of the Loundy Human Rights Project at Roosevelt University. She holds a PhD in Political Science from UCDavis and a BA from Duke. Among her publications are Human Rights and Foreign Aid: For Love or Money (Routledge, 2007), The Politics of Harry Potter (Palgrave McMillan, 2012), and two edited volumes on democracy and war. Her primary teaching interest is connecting students to nature and their own communities and empowering them to create change.