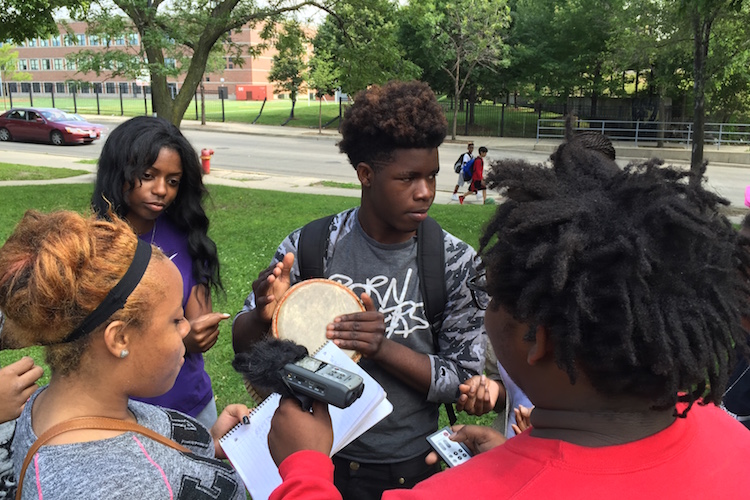 I love how Chicago is a city with such a rich cultural history, while also a place that teems with natural splendor. As an educator, I’m interested in developing curricula and facilitating projects that highlight the confluence of humans and nature in Chicago—to explore the spectrum of this “Urbs in Horto” (Chicago’s Latin motto, which means “City in a Garden”) in a new light.

Since the summer of 2015 the Borderbend Arts Collective, which I direct, has been running an After School Matters program called Chicago Kaleidoscopes (CK), in the Logan Square neighborhood. Last summer Chicago Kaleidoscopes was hosted by Mozart Park, and since last fall it has been hosted by Marine Leadership Academy (MLA). Teenagers (14 to 18 years old) have taken part in the CK creative writing program, which I have been leading.

In Chicago Kaleidoscopes, teens learn about writing genres such as poetry, fiction, and screenwriting; read literary works by writers from Chicago and elsewhere; integrate other art forms such as music and visual art into their creative projects; and prepare for college options and possible career paths. One themed project that we continue to return to is “arts and nature in Chicago.”

To help prepare CK teens to create artworks inspired by nature in Chicago, I have integrated the following materials into lesson plans, among others—“A Bird came down the Walk (328),” by Emily Dickinson; City Creatures: Animal Encounters in the Chicago Wilderness, edited by Gavin Van Horn and Dave Aftandilian; “The Panther,” by Rainer Maria Rilke; and The Secret Birds, an exhibit by Tony Fitzpatrick.

CK teens write poems and short stories inspired by nature in Chicago—including literary works about wild creatures, pet dogs and cats, animals at the Lincoln Park Zoo, Monarch butterflies migrating through the Chicago area en route to Canada, and flowers that grow in urban gardens. The following are several examples of poems by CK teens that are inspired by nature in Chicago. 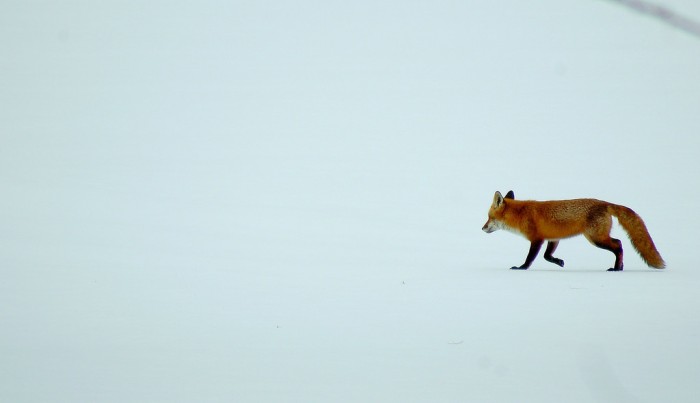 Early Play and a Late Day

I open my eyes and see the start of a sunrise.

My den is cozy and warm. It shields me from the rising cold.

I get out and shake my ruffled fur—matted dust comes out,

Trotting along the snowy grass I sniff out my meal,

all trying to run for cover or hiding restlessly.

I close in on my prey. The rat is unaware of my presence.

I feel lucky so I leap and swoosh: I catch him. I carefully look

around, searching for any danger. I drop the rat and breathe

in deeply, looking at the dull but clear sky.

I eat my fill, and then I notice the change in season,

and the long wait for summer to begin has come.

and shine, my fiery orange coat replenishing my healthy look.

I say my goodbyes and leave them be, gracefully dodging logs

and fallen trees. I find my den. I look up again in contrast.

It’s a sunset and some stars have come out.

I look one last time, then retreat to my cozy den.

Alyssea wrote that dramatic monologue during CK’s fall 2015 term. I have been enamored with the dramatic monologue poetic form for years. The idea of taking on and inhabiting a persona is fascinating, and can help a poet to articulate perspectives and experiences that simultaneously expand the imagination and create personal connections between what is imagined and what one has experienced, grounding fantasy with emotional and intellectual authenticity. I have found that teens who explore the poetic form of dramatic monologue can come up with unusual and dynamic images and language that can give voice to essential aspects of who they are. That poetic form can also be a literary vehicle with which teens can poignantly express their connections to urban ecology. Here are more dramatic monologues, by Emil and Bryan.

I’m a black panther in the Lincoln Park Zoo,

strong and powerful. The black panther is unique

because few animals are perfectly black.

The black panther is a huge cat whose color

provides good camouflage at night, so it can catch

its prey and avoid dangerous enemies.

My brothers and sisters live in rainforests in Africa.

Please help the black panther—it’s trying to do

its job of being a part of nature.

I see all the kids with their parents,

they're having so much fun. I wish I could join,

but the younger kids might try to catch me.

At least the elderly are nice—they feed me.

I’ll be waiting in the trees.

Kayland, Venus, and Faith, who were in Chicago Kaleidoscopes last year, wrote these poems about flora and fauna in Chicago—

Dark goldenrod, brighter than gold, yet darker than yellow

Almost like the shade of yellow that resembles the sun

Makes you feel the complete opposite of mellow

The color looks like the smooth playing of the cello

Listen to dark goldenrod as the song is almost done

Dark goldenrod, brighter than gold, yet darker than yellow 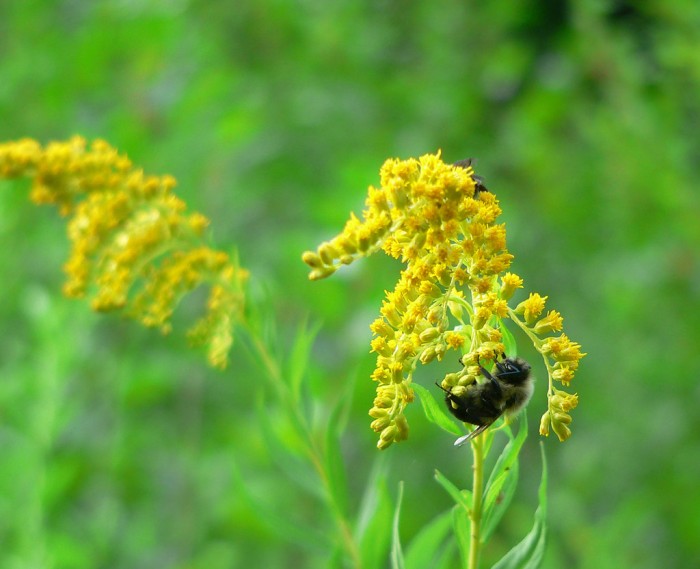 The purest color of them all,

so vibrant and lively. So beautiful,

almost too beautiful lying there

in a field of other beautiful flowers

with the sun setting. It fits the scenery—

peaceful and calm, a feeling of belonging.

Out of all the other flowers, white roses

are the ones that stand out the most in Jackson Park.

White roses are the most beautiful, but also

the most lonely. Even when autumn comes

and all the other flowers die, the white rose is the last

to leave this season and still beautiful even in death.

Oh how I love the color in you!

Your black wings with such magnificent iridescent blue along

How I wish to be so much like you,

So consummate, so pure

And peaceful. You enlighten many

Souls and make many people rise on their tippy toes.

I visited you a few years ago in Lincoln Park.

My favorite season is autumn, with the beauty

Of the trees, the brilliant colors! Red, orange, gold and brown,

Oh so warm in my heart, 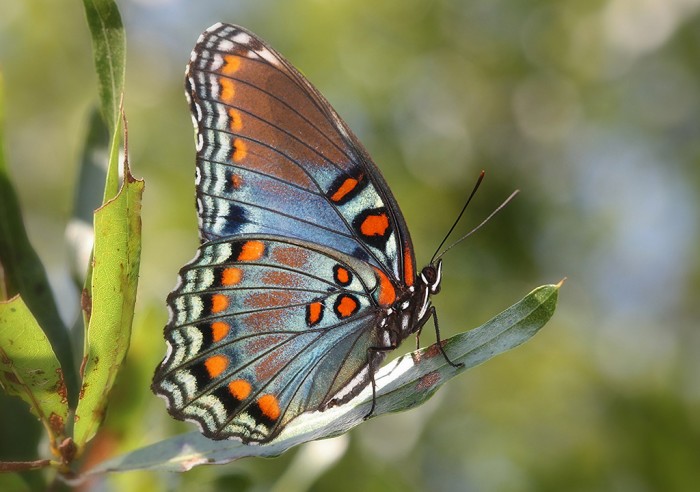 In addition to the poems above, CK teens have written short stories that foreground nature in Chicago. They have also made audio recordings of themselves reading their poems and short stories—in solo and polyvocal spoken word, and ensemble contexts with musical accompaniment. (These recordings can be accessed via CK’s bandcamp site.) Some of the audio recordings thus far have been made indoors, whereas others have happened outdoors—such as ones that were made en plein air under the shade of maple trees at Mozart—complete with background soundscapes that include traffic din from Armitage Avenue, a Metra train thundering down the Milwaukee District / North Line, basketball players competing on the court, and locusts droning in the August heat. 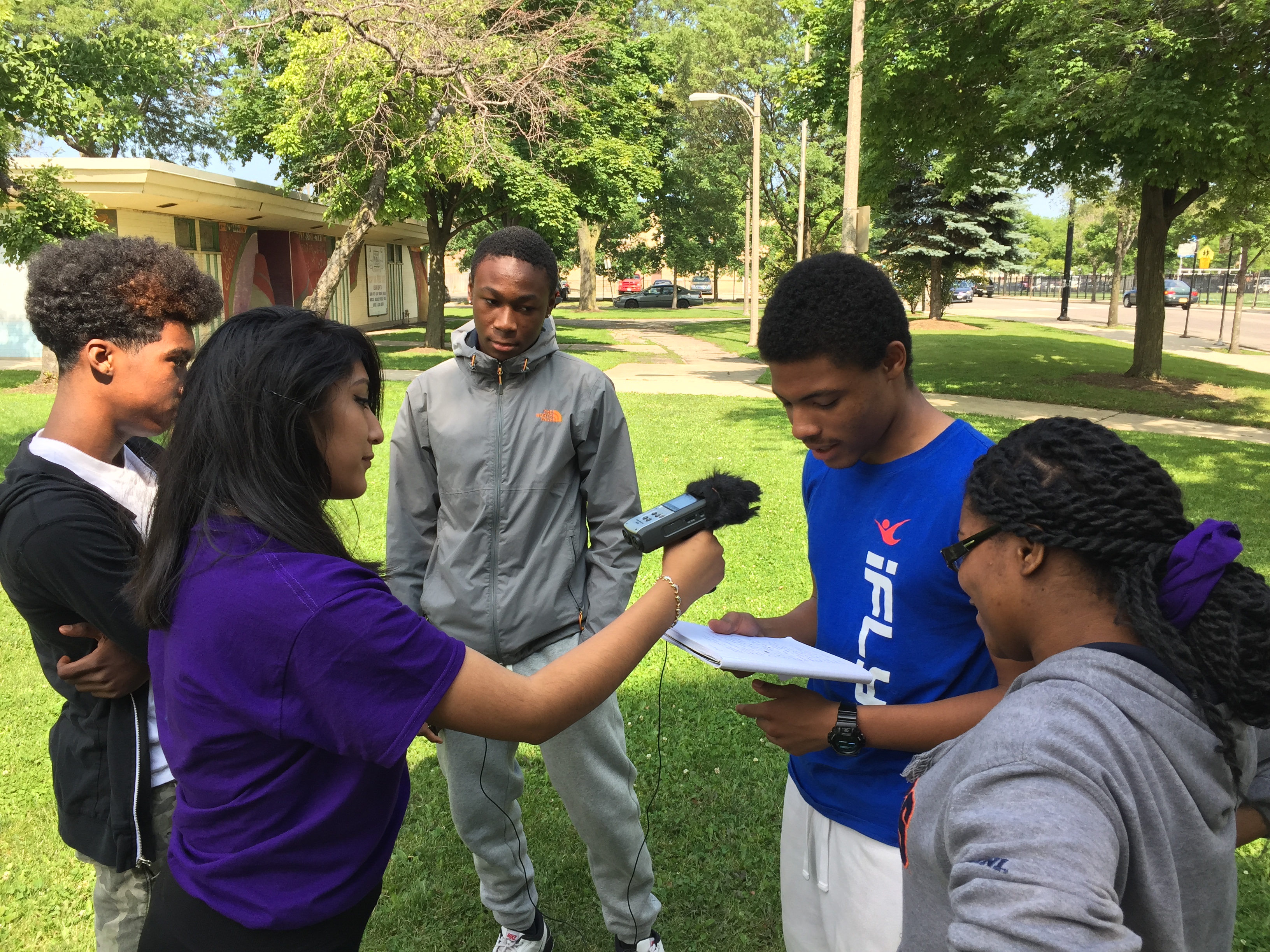 Some of these “arts and nature in Chicago” projects have also involved visual art, such as this photo of Angel G. with his poem “The ‘C’ Styled Wolf” projected onto him: 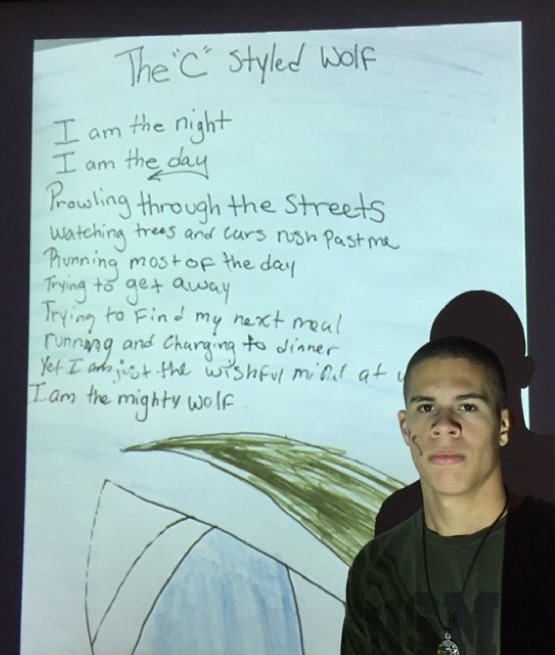 Field trips and presentations by visiting speakers have enriched our class sessions. For instance last summer we explored the theme of “arts and nature in Chicago” with the help of visiting speaker Yolanda Bradley-Crocker from Outdoor Afro, who gave a presentation to the teens in the Mozart Park Fieldhouse. After Ms. Bradley-Crocker’s presentation, the teens worked in groups to collaborate on stories and audio tracks inspired by connections between African Americans and nature. 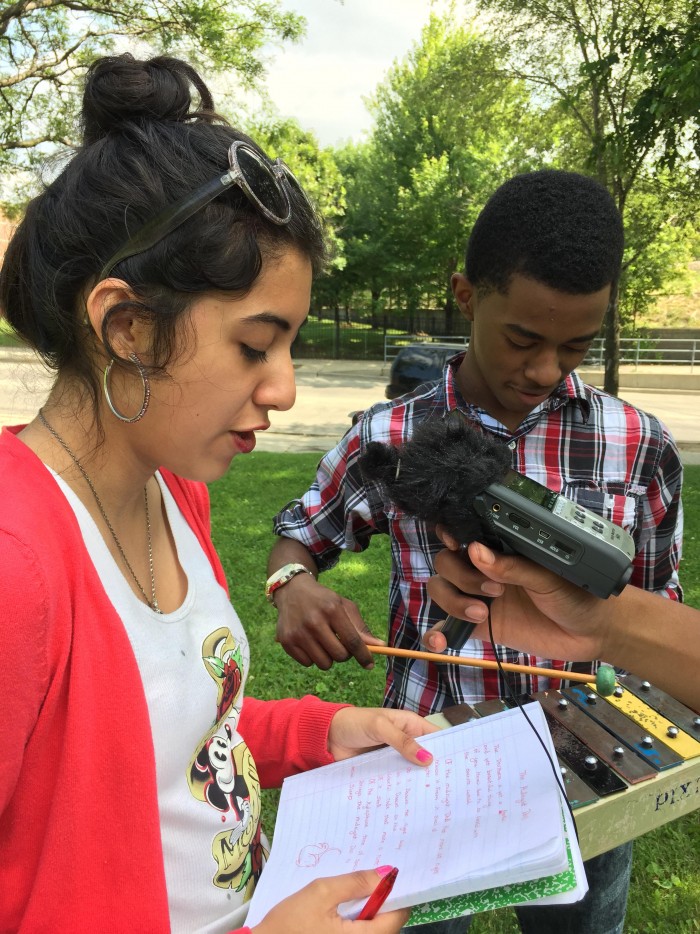 It’s fascinating to think how we humans coexist with other living beings in our ecosystems, and an urban ecosystem such as Chicago’s can provide inspiration for many educational programs and teachable moments. When the three threads of the arts, nature, and Chicago are braided together—and when teens are invited to explore creative possibilities with those braided threads—they can come up with striking tapestries that attest to their imaginations and dynamic potentials.

I would like to thank After School Matters, Marine Leadership Academy, and Mozart Park for helping to make Chicago Kaleidoscopes possible. Special thanks to Ms. Kassandra Cosby, Language Arts Teacher and After School Matters Liaison at MLA; Ms. Erin Galfer, Principal at MLA; Mr. Jeffrey Whitaker, Assistant Principal at MLA; Emily Nott, North Region Program Specialist at After School Matters; John Yost, Supervisor at Mozart Park; and the parents and guardians of CK teens for supporting these opportunities. Chicago Kaleidoscopes’ spring 2016 term just started up at MLA. I can’t wait to find out what kinds of remarkable artworks CK teens create this time around!