A Review of Magdalena Mountain: A Novel, by Robert Michael Pyle (Counterpoint Press, 2018)

“. . . the intelligent trail.”
—Excerpt from a poem by Bel, a girl in Vladimir Nabokov’s novel  Look at the Harlequins! 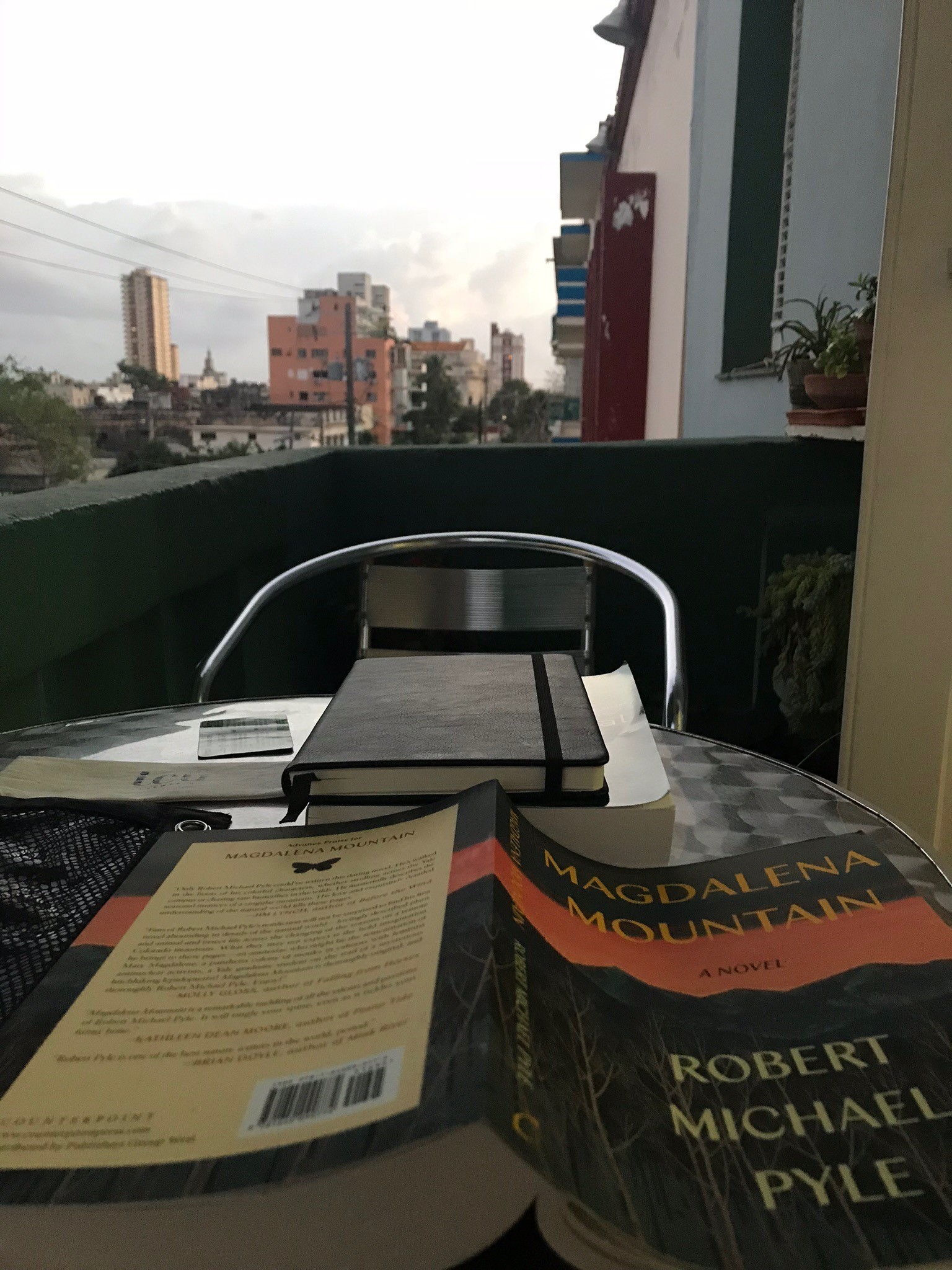 I read most of Robert Michael Pyle’s new book Magdalena Mountain from the balcony of my apartment in Havana. That isn’t a wholly inappropriate place to read Pyle’s novel, which is set on the campus of Yale and in the Colorado Rockies. In December 2016, he was among a group of U.S. writers who came to Havana for a five-day conference with Cuban writers. We stayed in casas particulares (private houses) only six blocks from where I am sitting. Our goal was an exchange of work and cultural perspectives and to begin walking a bit of common ground. One of the highlights of the trip was a tour of the botanical gardens in Havana. Our host Armando Fernandez had arranged for two bilingual guides, young biology students at the University of Havana, who gave us more information than on a typical tour—all thanks to Bob’s incredibly kind and very specific questions and reflections about the flora, their interpretive display on Cuban snails, questions about their use of the words indigenous or native in reference to certain species, and, of course, the mariposario (butterfly house).

If you’ve spent any time with Pyle, you know these moments—a beautiful, joyous, free-spirited, passionate, thoughtful, and inquisitive mind at work and play. Bob’s twenty-two books span the gamut of nature writing: scientific publications, an IUCN red data list, field guides (including a children’s coloring book of insects), natural histories, nature essays, memoir, columns, poetry, and now a novel. From his early publications until now, Pyle has consistently avoided falling into a pattern of genre and style. He is as comfortable working on detailed field notes as he is working on line breaks in his poetry. His writing life is a testament that the best of what a writer can do is let her passion carry her along an “intelligent trail.”

Magdalena Mountain is set in the early 1970s and follows the stories of three characters: James Mead, a new Ph.D. biology student at Yale; Mary Glanville, a mysterious character with a head injury we meet in the first chapter as her car flies off a mountain road; and Erebia magdalena, the Magdalena Alpine butterfly which lives its life above timberline.

Mead’s story begins by recounting his fears as he begins his studies at a prestigious eastern university far away from his home in New Mexico. Mead’s trials and successes at Yale, treading the tortuous path of appeasing prima donna faculty, such as Dr. Griffin, or finding academic and intellectual mentors, such as Dr. Winchester, mark a theme throughout the book—finding one’s place by taking risks to follow one’s passion. Even the wise old specter of Evelyn Hutchinson makes an appearance, bemoaning to Mead the popular misuse of his coined term ecological niche and offering some life wisdom: “In science and in letters, as in life itself, the rewarding course often proves to be the risky one, where the outcome is uncertain.”

Mead’s work in the entomological collection puts him into contact with the journals and field notes of an iconoclastic character named October Carson. Mead is inspired by Carson’s journals that depict the trained eye of an excellent field naturalist, but it’s also the personal stories and descriptions of a life dedicated to freedom and intimacy with the other-than-human world that shape Mead’s thoughts. Mead’s story and the novel take a severe turn when he decides to leave his obligations at Yale for the summer and travel to the Rocky Mountain Biological Laboratory, possibly alienating Dr. Griffin and complicating the future of his Ph.D. Between his desire for Noni, his love interest, the possibility of tracking down the enigmatic Carson, and his growing interest in the Magdalena butterfly’s name and natural history, Mead takes the risk he realizes he needs to follow. 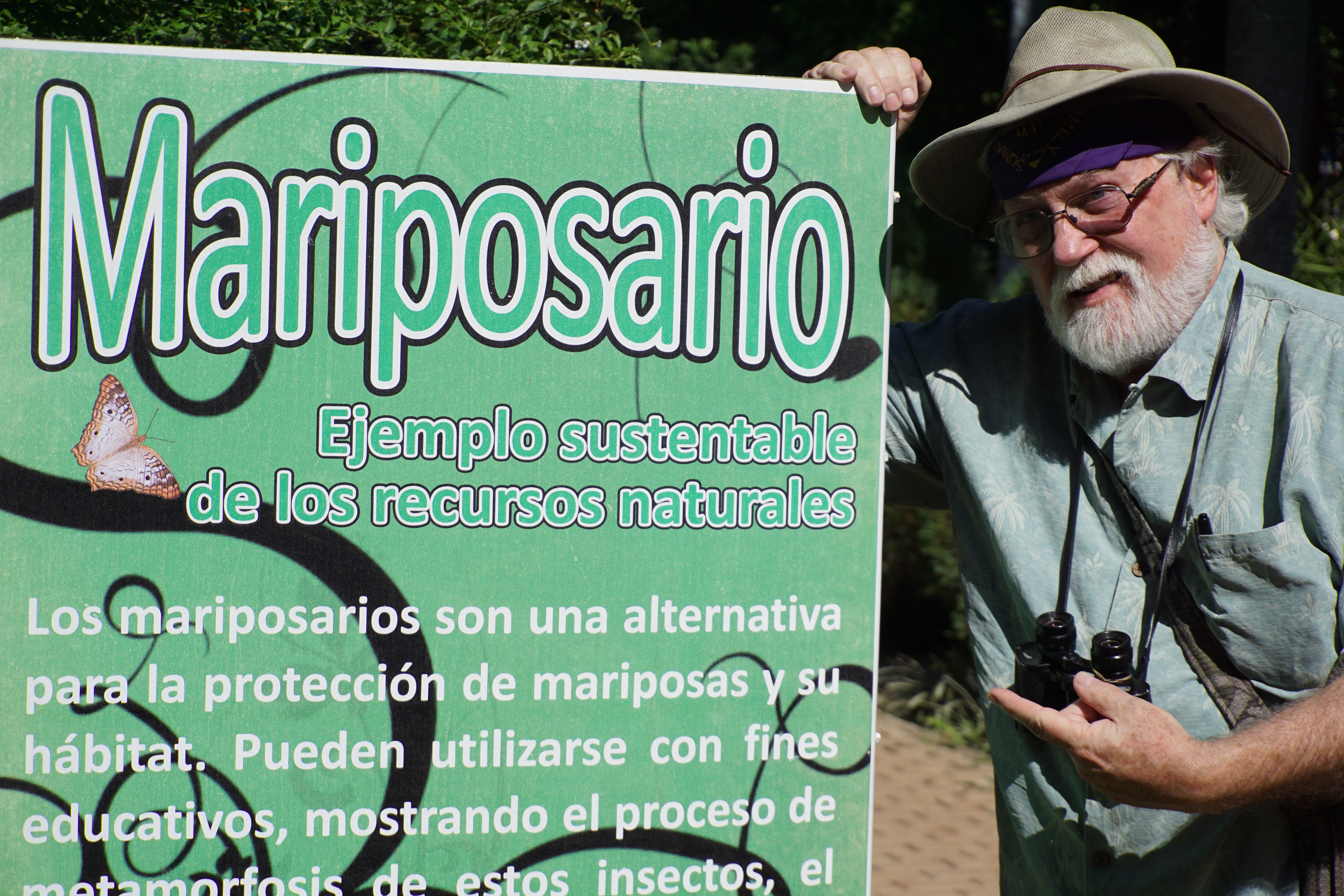 Mary Glanville’s initial narrative is less clear to the reader as she wakes in a medical center, unable to speak and with no clear memory of her life before her car plunged off the road. Slowly, Mary recovers, and, when not drugged for the convenience of the medical staff of a nursing home, begins to regain speech and a sense of her mental stability. Her time there leads to despair, though, and she contemplates suicide.

As spring comes, a chance meeting with another patient, Howard, begins her own journey to freedom, as he says to her about leaving, “Why not just go?” She leaves and hitches her way into the high country. There, when Mary collapses by the side of the road, Oberon and Attalus, two members of a nonconformist group called the Grove, dedicated to a more thoughtful and spiritual way of living with nature, rescue her. They take her to the old monastery on the side of Magdalena Mountain. These two become savior and persecutor to Mary: Oberon’s gentle and kind protection versus Attalus’s misogyny and eventual violence toward her. During her time at the monastery, Mary comes to believe she is the reincarnated biblical Mary Magdalena.

The third story woven into the novel is the life cycle of Erebia magdalena, the Magdalena Alpine butterfly. In an ingenious structural part of the work, Pyle weaves short natural histories describing the life cycle of the butterfly corresponding to the seasonal changes in the novel. These sections aren’t placeholders between chapters of human events; they are essential and integral to the grander story. The novel would be diminished if a reader overlooked these sections and read only the human narratives or vice versa. These descriptions connect intimately with the narratives in ways only a fine work of art can show—that there is far more subtlety at work in our understanding and relationship with the non-human than we can easily articulate. For example:

But one of the siblings feels a walkabout urge prior to settling down. . . . This creature, called Erebia for his genus, wanders many times his body length [as a baby caterpillar]. A chance left turn at a lichened cobble keeps him from a lethal head-on with a ground beetle. Finally, he pauses in a tussock at the base of a great boulder, hunkers in, and shuts down but for a flicker of life in his dormant cells.

The specificity and lushness of these interspersed sections remind the reader Pyle is a truly gifted natural history writer.

I’ll not spoil whatever “cliffhangers” the novel may hold when the relevant characters come to their inevitable meeting. The conclusion holds a unique and quirky turn on any expected resolution to the stories. Also, I have glossed over many of the well-drawn characters in the novel whose descriptions and manners give the work a depth and playful resonance, especially with readers who know much about Pyle’s remarkable background in the field with many of the twentieth century’s best lepidopterists and naturalists. Some of these characters are clearly drawn from field biologists Pyle has encountered for over forty years. The novel also readily uses non-fictional characters and storylines in its fictional tale (for example, Enos Mills; the story of Vladimir Nabokov’s proximity to Magdalena Mountain; even Nabokov’s Bel poem). Readers will note the playful name of one character, Michael Heap, a butterfly expert who resembles Pyle himself in look, talk, action, and net. Magdalena Mountain is a project of many decades and drafts in the making, and its clarity and word choice reflect Pyle’s work and patience.

What might Bel’s line “the intelligent trail” refer to? Robert Michael Pyle’s Magdalena Mountain offers a possible answer—take the risk of following a passion; give it work, attention, and kindness; and even though the outcome is unknown, that risk might just lead you to a place you could not have imagined otherwise. Like any excellent work of art, Pyle’s novel isn’t prescriptive but suggestive. The novel draws the reader in with the characters’ and Erebia’s stories, but it also gives space for the reader to forge ahead and reflect on one’s own trail ahead.