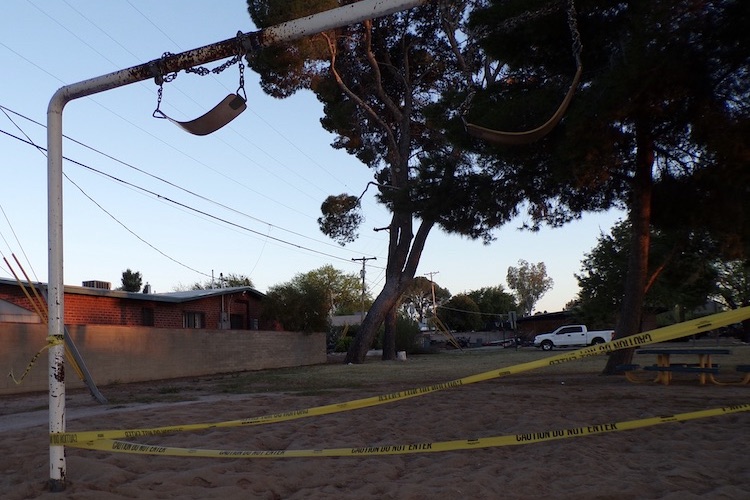 One, Two, Three, Four: The aromas of bacon and perfumed laundry soap await me outside. A black-chinned hummingbird buzzes by on the way to the feeder hanging from the front yard juniper. I call him Harry. He greets me every morning with a lopsided query showing just a hint of metallic purple on his throat. Avian pox has turned his right eye into a tower of flesh-toned warts. They build upon one another like a directional cairn that Harry can never use.

Five and Six: Ants swoon about my feet, alive in their purpose: food. Their bodies blend into the asphalt earth that is my driveway. Watching them makes me dizzy as it appears the ground is moving. I wonder: “Where am I? My driveway or the ants’ home?” Either way, I am delighted to witness their daily parade. My landlord’s terminator snuck by me once and sprayed their home. I cursed the killer as I stared at poisoned corpses. Two days later, survivors emerged from granular sand underneath the desert petunia to carry the bodies of their oleic acid-covered kin away to their funeral pile.

Seven: A dull tap reminiscent of a lethargic woodpecker originates from across the street. It’s my neighbor calling out. I take steps eight, nine, ten, eleven, twelve. I hear him before I see him. A whoosh of grey air grazes my head, sound follows—rrussshh. I twirl to witness his slim hawk-form pirouette in the sky as he hunts down a breakfast of pigeon. “Hi Coop,” I call.

Thirteen: I wait for another neighbor to jog pass. She and I are not wearing masks. I’m not sure if they are needed: we are at least ten feet apart and outside in the spring breezes. Wind, how far can the virus float? Is it like a ballooning spider on a gossamer thread? Or, is COVID-19 like a bad bowler dropping an overweight sphere of plastic and resin to watch it roll forward a few feet before guttering still?

Fourteen, fifteen, sixteen, and seventeen: The end of my driveway. I am blocked from the street by a family biking by—plastic rainbow ribbons trail their shadows. There are kids on this street?

Eighteen, nineteen, twenty, twenty-one: A young, black cat lopes behind me. He had been startled away by an aggressive calico from the water bowl lying below and off center of the bird feeder. I put out the water source for his colony of strays and the local, avian community (they seem to sort out who gets a drink when). Two A-10 fighter jets scream above the earth. The wingman is slightly off the leader’s left.

Twenty-two, twenty-three, twenty-four, and twenty-five: I hear a human voice yelling “Mush!” The word stops me on this sunny Arizona morning in my mid-town neighborhood. I wait at the intersection of our locations: Plumer and Spring Streets. It’s a guy dressed in shorts and a beer slogan t-shirt sitting in his kids’ (I hope) plastic pull wagon being dragged by two leashed husky pups. Their tongues loll as the rising sun glints off their sky blue pupils, reflecting the frozen tundra of their past.

Twenty-six, twenty-seven, twenty-eight: The corvid pair caws in flight. Remove the “r” from their family name and they become covid. They would be a viral pathogen I could live and go hiking with. An avian virus that would allow movement and commerce to continue. But alas, they are the crow strain; the magical beings of flight that foretell our futures and demises according to one’s imagination. 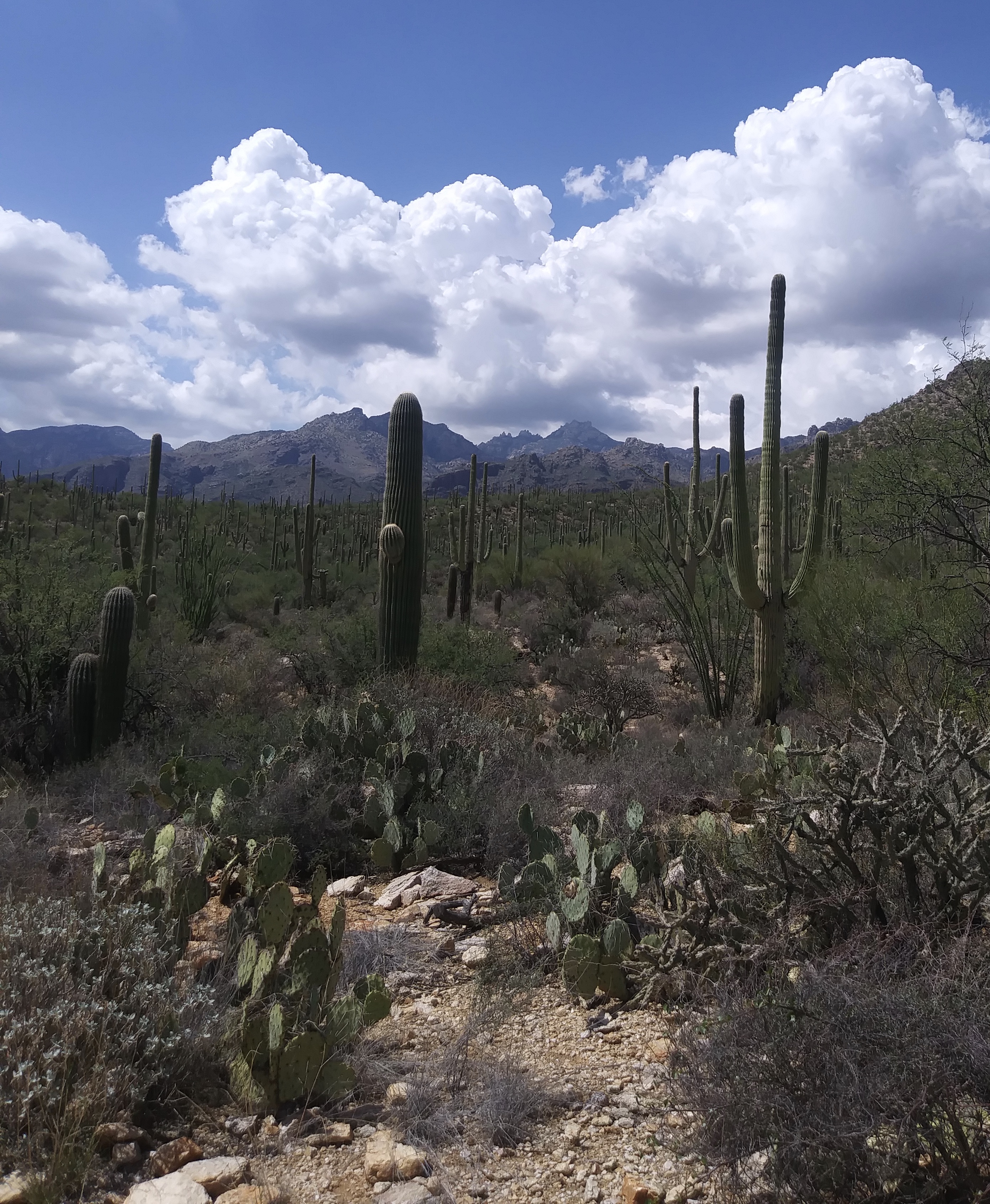 Twenty-nine: Sirens behind me. A main east-west corridor of my city lies behind the alley to the rear of my home. Grant Road connects the saguaro-studded mountains from the east to their counterparts in the west; two national parks that are now inundated with hikers and their dogs. They are the reason I remain in my neighborhood with my dogs. Now this conglomeration of streets, alleys, and a bird-seeded “canal” are busy. Strangers with dogs that are new scents to my pups, and seemingly insta-children have taken over the sides of the road, the one sidewalk in the neighborhood, and the only patch of grass around in the small park at the end of the street.

The sirens come closer. I try to get my older pup to move nearer to the curb and my younger pup to stop eating the black olives that have been rotting in my neighbor’s yard since February.

Thirty: I tug on Tesoro’s leash. I ask Bohdi to come. I intuitively know the large engine from the fire station up the road is going to pull into my street fast and wide. Tesoro won’t budge. Bohdi comes to my feet, tail wagging as she chews the desiccated fruit. Neighbors who disappeared into their home a month ago emerge from their side door. I breathe a sigh of relief and inhale the sweet acacia blossomed air. It’s been a month since I last saw the couple. Lately, I had been wondering if one day I would smell the stench of rotting flesh from a murder-suicide.

Thirty-one: Tesoro finally moves his big white body with the off-gait caused by old hips. I smell the beast before I see it. The diesel wafts forward containing a faint scent of Band-Aids. The red truck pulls in wide to our road and stops at the triplex a few homes down. A mockingbird provides the sound for the silent, but flashing fire engine.

Thirty-two: I look past the mesquite trees shooting out their new green, and the white-winged dove cooing from her three-stick-constructed nest to the big truck being joined by a little truck, and then an ambulance. There is too much human activity out here.

Thirty-three to sixty-six: We re-trace our steps back to four walls too early. The dogs furrow their brows at me in confusion. They haven’t marked their turf on the neighbor’s driveway or taunted the chihuahuas across the street with their freedom while they remain barking behind their gate. But they adapt and mark their turf on our gravel and burnt orange globemallow blooms, confident that the routine “after walk” bone still awaits them. I, on the other hand, get stuck on the image of the firetruck. How many more times will I see it on my street despite the neighbors’ and my best efforts?

Janay Brun is a naturalist who lives in Tucson, Arizona. She is the author of Cloak and Jaguar: Following a Cat from Desert to Courtroom.