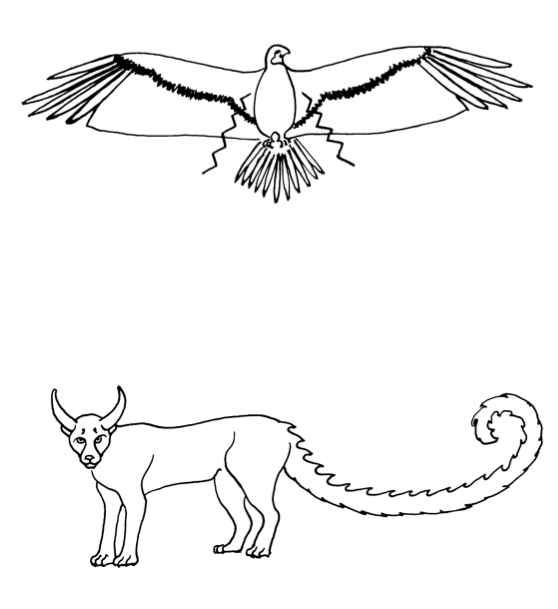 My quest in search of the mythological wildlife of the Chicago region began as a search for healing. I was a city girl, immersed in a culture disconnected from nature, and dealing with a protracted illness. I noticed that I felt better whenever I was in my tiny backyard among the plants and critters. That led me to explore the local forest preserves, finding wondrous remnants of native ecosystems, and awakening my inner naturalist.

As I gradually learned about native biodiversity and the need to protect and restore it, my inner artist and mystic also spoke up. I had a deep intuition that connecting with the spirit of the land would help me heal. I had opened a door by learning about nature, but mystery took the next step. The question occurred to me, seemingly out of nowhere: “What about mythological wildlife?” Every region has them; they must surely exist in Chicago, too. But who were they?  The only ones I had heard of were in urban legends: super-rats or feral crocodiles that live in the sewers and show up in somebody’s toilet on occasion.

I knew I had to go to the cultures living here before my immigrant ancestors arrived. At the time, the Native American Educational Services College was in Chicago, and I paid them a visit. When I asked the librarian my question, his eyes grew wide. “Oh, you want to learn about Mishebeshu,” he said, and brought me books with legends about this powerful creature that is believed to dwell under the lakes, rivers, and wetlands. It is described as a panther with horns and a long tail. Each tribe has its own name for the creature. The Ojibwe call it Mishebeshu, which, like the names given to this being by other native peoples, is sometimes translated as Water Spirit or Underwater Panther. I call it the Water Monster.

Not long after, at a conference with teachers and elders of many tribes, I asked an Ojibwe elder about Mishebeshu. She said that the people would always acknowledge the Water Monster before embarking on a canoe trip. They would sprinkle tobacco on the water as an offering.  If they didn’t, the Monster might sneak up on them and flip their canoes and drown them.

Springs and seeps, where water comes from underground, are the portal to their domain: the lowerworld. This is a place where outer and inner landscapes meet. It is full of shadow and mystery, but it should not be confused with European literature and mythologies about hell.  Though frightening, this Monster is not regarded as the embodiment of evil. It can be destructive, yet also bestow great blessings, such as healing power. In this Ojibwe story, a young woman refuses to follow her people’s practice of avoiding the Monster, and her confrontation has fortunate results.

Many of the Water Monster stories also mention a powerful creature of the sky: the Thunderbird. It’s a huge bird that makes thunder by flapping its wings and lightning by blinking its eyes. The Thunderbird brings rain. It guards and protects people. It gives warriors power. The portal to their upperworld realm is where earth meets the sky, including hills and bluffs. Thunderbirds are usually benevolent but occasionally fearsome, striking people with lightning or kidnapping them. They often battle with Water Monsters, carving out landscape features in the process, and enjoy eating their lowerworld counterparts.

My quest led me to sites across southern Wisconsin and northern Illinois where native people sculpted the earth into shapes of creatures. These effigy mounds are between 700 and 1200 years old. Most contain human burials, and may have been used for ceremony and/or as territorial markers.

When I heard about the effigy mound in Rockford, Illinois, I went to pay my respects. It was labeled as a “Turtle,” but had a very long tail. I also visited Lizard Mounds near West Bend, Wisconsin, which has many long-tailed mounds called lizards and panthers. I found a book by Robert Birmingham and Leslie Eisenberg entitled Indian Mounds of Wisconsin, which draws from scientific and native sources, and offers the explanation that the long-tailed mounds represent Water Monsters.  Many of the mounds in the shape of birds may represent Thunderbirds.

The people who probably know the most about the meaning of these mounds are the Ho-Chunk, who are descended from the mound-builders. The information they have shared so far is that the effigy mounds represent a spiritual worldview: that it is the role of the people to bring balance and harmony to the earth by connecting with the spiritual energy of the upperworld and the lowerworld, and making it visible in the world of our everyday existence.

Over the past few years I have been experimenting with this wisdom. Exploring the upper and lower worlds helps me to remember that my spirit and soul are woven of nature. One of the ways that I try to make Thunderbird and Water Monster energy visible in the everyday world is through volunteer work as a steward of an oak savanna, restoring ecological balance and harmony to a small piece of earth in need of healing. This practice has brought me a deep sense of belonging to this land, and I am being healed too.

When the U.S. government forced the Natives out of this area, the European-American settlers often dug into the mounds, and/or plowed them up. Who knows how many mounds were destroyed before being identified? Did some exist in the land now known as Chicago?

And where are today’s Water Monsters and Thunderbirds? I believe they haven’t been extirpated yet, but are waiting for anyone who seeks the wisdom they guard. Many of their portals have been altered since the time that the Potawatomie flourished in this region. Instead of springs and bluffs, urban-dwellers may look to sewer grates (or toilets) and skyscraper rooflines. A walk along the lakefront could turn into an encounter with the lowerworld or upperworld. Just as I didn’t expect an innocent question about mythological wildlife to become a quest for a new understanding of my place in the universe, you never know what might happen if you start becoming alert for a tail twitching in the water or a wing flapping in a cloud!

Images (from top to bottom)

* Illustration of Thunderbird and Water Monster, by Judy Speer

Judy Speer lives and forages in an oak savanna near the headwaters of the Nippersink Creek in northern McHenry County, Illinois. She practices and teaches Permaculture design, ecological restoration, and deep ecology with Small Waters Education.