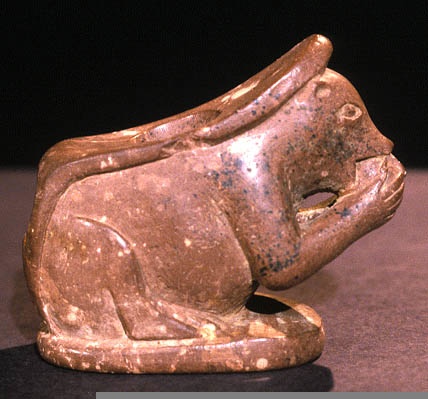 The first time it happened, I was shocked. The second time, I was irritated. And by the third time I was ready to go for blood. What stirred my righteous anger, you ask? One of the most pestiferous pests an urban gardener has the all too common misfortune to meet: Sciurus niger (fox squirrel) or S. carolinensis (Eastern gray squirrel), the tree squirrels most often encountered in backyards and other urban/suburban spaces in the Eastern United States.

No matter how much cayenne or other scary pepper powder I spread around my herbs to discourage them, the darned squirrels continue to dig, dig, dig, sometimes uprooting and killing my young basil plants in the process. Or they nibble off tender young branch-tips of our red oak or Bradford pear trees in search of water (or just to annoy me). And then there was the time this one squirrel gnawed a hole in one of the cushions on the chairs on our deck and proceeded to abscond to her or his nest with mouthfuls of polyester stuffing until I took the cushion away. I consider myself a friend to all furry creatures, and am generally a peace-loving sort, but I have threatened on more than one occasion to buy a gun for the express purpose of shooting the darn squirrels who will not leave my herbs alone.

Of course I am not the only one to feel this way. Pretty much every urban gardener has tales of woe or rage or resignation involving squirrels. Those who have fruits and vegetables to lose suffer even more, driven to mist nets or metal sheaths around their tree trunks and thoughts of coonskin caps made out of squirrel skins instead.

And even if you don’t have a garden, you’re still not safe. When my wife was in college at the University of Chicago she bought a cookie in the Divinity School coffee shop and went outside under the trees with a friend to eat it. They got to talking and she set the cookie down on the ground, planning to finish it later. But a bright-eyed squirrel had other ideas, snatching the cookie and hightailing it up the nearest tree trunk. At least my wife got the satisfaction of seeing the squirrel lose his ill-gotten gains: a crow dive-bombed the squirrel till he dropped the cookie, at which point the crafty crow grabbed it and flew off into the (metaphorical) sunset.

On the other hand, I do have a grudging respect for squirrels, and some sympathy, too (when they’re not digging up my plants). Fantastic climbers, fearless leapers, relentless teasers of canine antagonists, busy hoarders against winter scarcity—squirrels do have much to recommend them. And it’s not like they have an entirely cushy life in the city (stolen cookies notwithstanding). For instance, many zag instead of zig when they see a large metal beast with big glass eyes bearing down on them, and end up as subjects of “flattened fauna” field guides. And it’s not all acorns and tulip bulbs for urban squirrels even if they’re not on the street. One of the squirrels in my backyard was so desperate for winter nest-insulating material that she chewed up bits of a big woven plastic bag, which slowly disintegrated, raining blue confetti on the lawn all winter and likely leaving her nest a mite chilly. Nor can I ever forget the day I was walking along 57th Street toward the University of Chicago campus and I saw a squirrel mis-time a leap from tree to tree and plummet with a pitiful, final squeal onto the sidewalk just in front of me.

And squirrels can also be beautiful. On the University of Toronto campus I made the acquaintance of a number of black (melanistic) squirrels, much bigger and glossier than their plainer, browner Chicago cousins. And just outside my office window at home I have ample opportunity to observe the soft, creamy-red underfur of the squirrels who use the crepe myrtle there as a stairway to the dubious heaven of our roof. Their bright, beady eyes and twitching nose-whiskers also endear them to those who do not know them as well as I do. And observers from the ancient Greeks to precontact Mississippian Native American peoples (see photo) have admired squirrels’ long, luxurious tails, which they can drape across their entire back and head. Indeed, the Greeks were so impressed by squirrels’ ability to cover/shade their whole body with their tails they named them “sciurus” (now used for the squirrel’s genus in its scientific name), which means “shade tail” in Greek.

For Native American peoples like the precontact Mississippians from eastern Missouri who made the squirrel pipe pictured here, I suspect some of the interest in squirrels (besides their value as a hard-times food) involved their liminal, borderline/anomalous status. Squirrels climb nimbly in the trees, yet spend a lot of time foraging on the ground, thereby crossing two of the three realms of many Native American cosmologies—the Upper World and This World of Earth. Because of their association with these two worlds, and also the ability of some squirrel species to “fly” using flaps of skin stretched between their bodies and forelimbs, squirrels also straddle the border between birds and four-footed animals. And because of their ubiquity in both wild and domestic spaces, squirrels connect those two realms. Native women also traditionally crossed both natural and domestic spheres, caring for their families at home but also entering the wilds to look for plant foods. Among the Omaha of the central Plains, squirrels were said to be especially connected with women, probably because both gathered food from trees.

Gerald Vizenor, a contemporary Ojibwe novelist and poet, finds squirrels particularly meaningful, according to Vizenor scholar Michael Snyder of Oklahoma City Community College. Vizenor has a chapter in his novel Dead Voices told from “the red rodent’s” point of view. He admires their humorous qualities, seeing them as “compassionate tricksters,” and also their adaptability—a quality his own and other Native peoples have long shared. More poignantly, Vizenor describes both Natives and squirrels as similar because both have been viewed as ubiquitous, but expendable.

Other Americans seem to have more of a love/hate relationship with squirrels, more like mine. I’ve already mentioned that gardeners are not huge fans of the shade-tailed ones. Both those negative views and more positive ones are on display at Project Squirrel’s web site (see http://projectsquirrel.org/comments_lovehate.shtml). Project Squirrel is a joint venture of the Nature Museum in Chicago and the University of Illinois at Chicago. It was created by Wendy Jackson and Joel Brown, and is currently cared for by Steve Sullivan, Senior Curator of Urban Ecology for the Nature Museum. The web site provides a space where ordinary Chicagoans can practice citizen science, helping out with long-term studies of fox and gray squirrel populations in Chicagoland. And it also gives people a place to sound off about squirrels. One squirrel-fancier wrote there that “I love my squirrels. I look forward to them everyday. I have a little corn feeder in the yard that has two little chairs so that they could bring a friend for lunch. ...I have the whole neighborhood feeding them.” Another Chicagoan retorted, “I don't remember how many of the squirrels I've trapped are grey or fox, & couldn't care less, to tell the truth. I just want to get rid of them. ...Squirrels are VARMINTS w/no serious natural predators in this area and the damage they do is considerable.”

All in all, I and every other urban resident don’t have much choice but to learn to live with our squirrel neighbors, even if maybe we don’t have to like them. If you’re interested in learning about some less drastic solutions to squirrel problems than trapping or shooting them, you might want to check out Wild Neighbors: The Humane Approach to Living with Wildlife by John Hadidian (2007, second edition, Humane Society Press). Fern Richardson and her readers offer some other solutions for keeping squirrels out of container gardens in her “Life on the Balcony” blog at http://lifeonthebalcony.com/dealing-with-pests-in-a-container-garden-squirrels/. For my part, I’ve resigned myself to mulching heavily around my herbs, so it’s harder for the squirrels to dig in a way that will damage them, and adding more mulch from time to time as the squirrels get especially frisky (or desperate). But on particularly frustrating squirrel depredation days, I still find myself wondering how I’d look in a squirrel-skin cap.