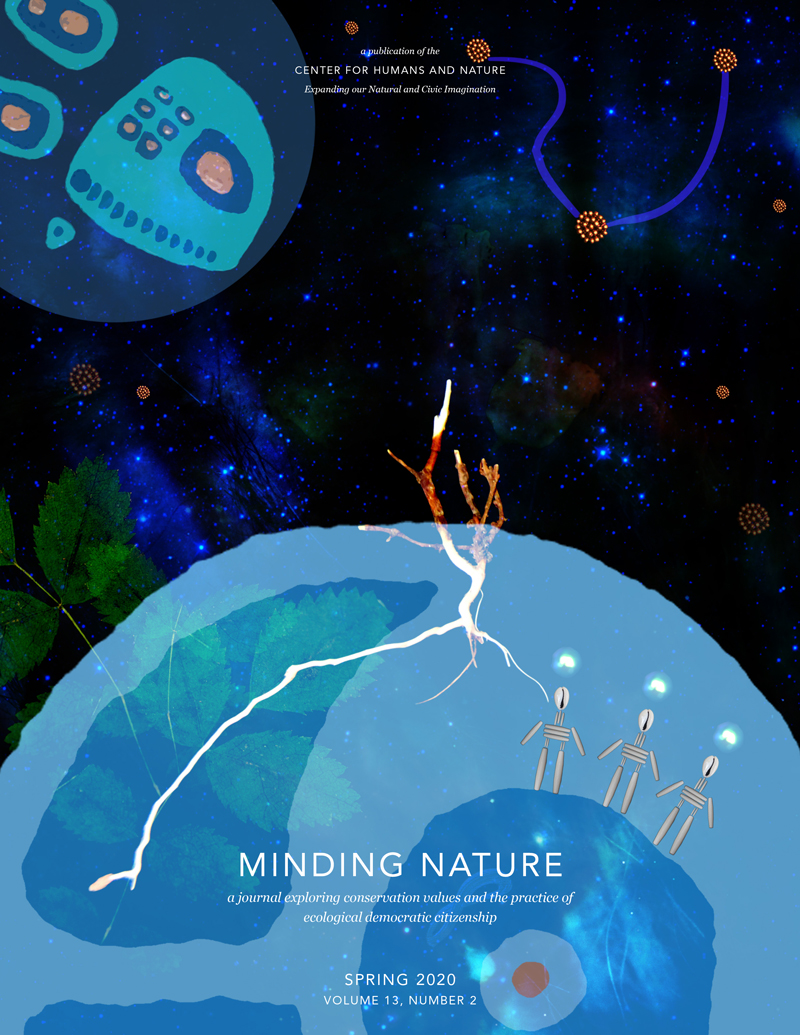 Is the ethical space linking the human and the non-human worlds limited to the personal and cultural virtues and sentiments of charity, compassion, and kindness, or does it also include matters of public justice and political obligation?

Center President Brooke Hecht sat down for a conversation with Ceara Donnelley, Vice Chair of the Center’s Board of Directors, on April 7, 2020. As colleagues, good friends, and mothers of young children, they shared questions and ideas they have been considering as the novel coronavirus has turned worlds and worldviews upside down. The conversation, shared here, has been edited for clarity and length.

This issue's CHN Bookshelf is a noncomprehensive selection of books, essays, articles, and videos compiled by Center staff around the theme of Ecological Citizenship.

Toward a New Cultural Reverie: A Cosmological Basis for the Ecological Citizen

Planet Earth, turning and turning, transmutes the rays of the Sun into a dazzling multiplicity of form and expression, an alchemy of tassel and leaf, fin and feather, eye and bone; all are progeny of a planet in reverie. And the dream becomes life in its full tapestry.

Can we view animals as citizens, and if so, would this help us to achieve interspecies justice and ecological renewal? Citizenship has traditionally been seen as exclusively human, but this essay explores emerging theories and practices of animal citizenship and what they can contribute to solving the political and ecological crises of contemporary societies.

In the spirit of public philosophy, I offer insights from community-engaged research with the urban agriculture community in and around Lansing, Michigan. My hope is to share sentiments from stakeholders who have crafted virtues for being good ecological citizens in a deeply democratic setting. These sentiments point the way to an urban ecological citizenship through which the community and the environment are open to democratic reconstruction and for which identity is a key nutrient in nourishing just and inclusive ecosystems.

It’s hard to pin down when exactly it happened, but at some point in the last several decades, we in the United States stopped calling ourselves, in the collective, citizens. These days, we may say we’re voters, with the angry partisan edge that it carries; or, when we’re feeling beleaguered, taxpayers, who grudgingly fork over our hard-earned pennies. Most commonly, however, we identify as consumers, as if our primary purpose—even assigned duty—were to gobble up everything in sight.

Troubling Ecological Citizenship: Expanding Our Minds and Hearts to See the More-Than-Human World as Our Relations

Staring squarely in the face of contemporary and continuous planetary climate crisis, the questions of how to intervene and act differently, both interpersonally and ecologically, are more pressing than ever. One increasingly popular move is reframing or recontextualizing humans’ relationship to Earth and our place within our planetary ecosystem.

Today, instead of simply sacrificing common grazing lands, theft of the commons seeps into every cell of human existence: the right to pollute, to extract, to harvest, to freely pursue profit, while leaving a wake of waste in its various forms, is stealing the commons not just from humanity but from the vast ecological entanglements we live among and depend upon. Only now are we remembering that, in order to advocate for higher forms of freedom, humans must first be able to live.

Wayward: Between Ecological Citizen and Denizen

Can I still use the word “nature” in these postmodern times? If so, I would say that nature has an uncanny—almost magical—ability to disrespect any human notion of borders or nationhood. It overruns, evades, floods with abundance. It is relentless.

Today, as we face overlapping environmental crises, we need a fundamental shift in humankind’s relationship with the natural world—this means a major shift in how we govern ourselves toward nature. To achieve this requires advancing major societal and cultural shifts, as well—that is, changing how societies think about nature and humanity’s role as part of it, and the recognition that nature is worthy of respect, protection, and rights.

Recovering Indigeneity: A Conversation about Food, Health, and Wellbeing

This past winter, on a frost-bitten February day, I met Akilah Martin and Orrin Williams at Kusanya Café in the heart of Englewood on the South Side of Chicago. Warmth enveloped us as we walked into the coffee shop—the kind of warmth that comes from a space of community and belonging. We met there to discuss ideas around local food and health care access, environmental and social justice, and ecological citizenship. These issues are near and dear to both Akilah and Orrin as they work with communities to reclaim food and health and to unravel entrenched systems of violence, racism, and injustice.

Reciprocity and Responsibility: An Interview with Alejandro Frid

Alejandro Frid is an ecologist for First Nations of British Columbia’s Central Coast as well as a professor at the University of Victoria. He works collaboratively with First Nations on the integration of traditional knowledge and Western science to advance conservation and revitalize Indigenous control of their resources. Alejandro is also my neighbor in a small island community in Southern British Columbia, not far from Vancouver. The waters that surround us have seen a remarkable recovery in the past decade following the shutdown of polluting industrial projects and the efforts of concerned citizens and citizen scientists.

“Whatever we do to the land, which is our source of life, we do to ourselves. . . . Kinship and guardianship are necessary for our very survival” (253), concludes Melissa Nelson at the end of the comprehensive and interdisciplinary volume, Traditional Ecological Knowledge: Learning from Indigenous Practices for Environmental Sustainability, co-edited with Dan Shilling.

The Sense of Home

Throughout my reading of Changing Tides: An Ecologist’s Journey to Make Peace with the Anthropocene, I found myself distracted by updates and conversations on social media about blockades, arrests, and ceremonial fires in northern British Columbia, then in Vancouver and across the country. A group of hereditary chiefs from the Wet’suwet’en Nation have been in court battling plans for the construction of a pipeline through their traditional territory since 2012, and this past winter, as they blocked the road into that territory, they faced militarized police, helicopters circling overhead, and bulldozers.

Wolverines once walked Michigan but now are rare sightings equated with rumors and illusory fancy. To be fair, Anishinaabeg never cared much for wolverines, who were said to have come to Aki (Earth) in a shooting star that impacted the land. Always seen as out of place, wolverines were fierce animals who made their presence known by pissing in our food just to let us know they didn’t want us anywhere nearby. Nonetheless, the thought of their presence returns us to another generation—one before colonization, before apocalypse.

A Spirit of Place

When I think of ecological citizenship, the first words that come to mind are sustainability, mindfulness, and empathy. I also think about change, and the kind of changes that are needed to become an ecological citizen or an ecological society. Changing a personal habit is difficult, but altering systems established on a global scale is intimidating enough to make it seem impossible. In this critical environmental moment, how do we support and motivate each other? How do we increase our capacity for empathy? How can we embrace curiosity and innovation over acceptance and fatalism?

We silence silence with unmuffled noise,

discordant music flailing all our senses.

It’s Bigger Than This

The last token to catch
the only bus that will
get you there on time
for your paycheck to see
you through two more weeks
amassing tokens just for change.

On the Cover: Elizabeth LaPensée, Growth, 2013