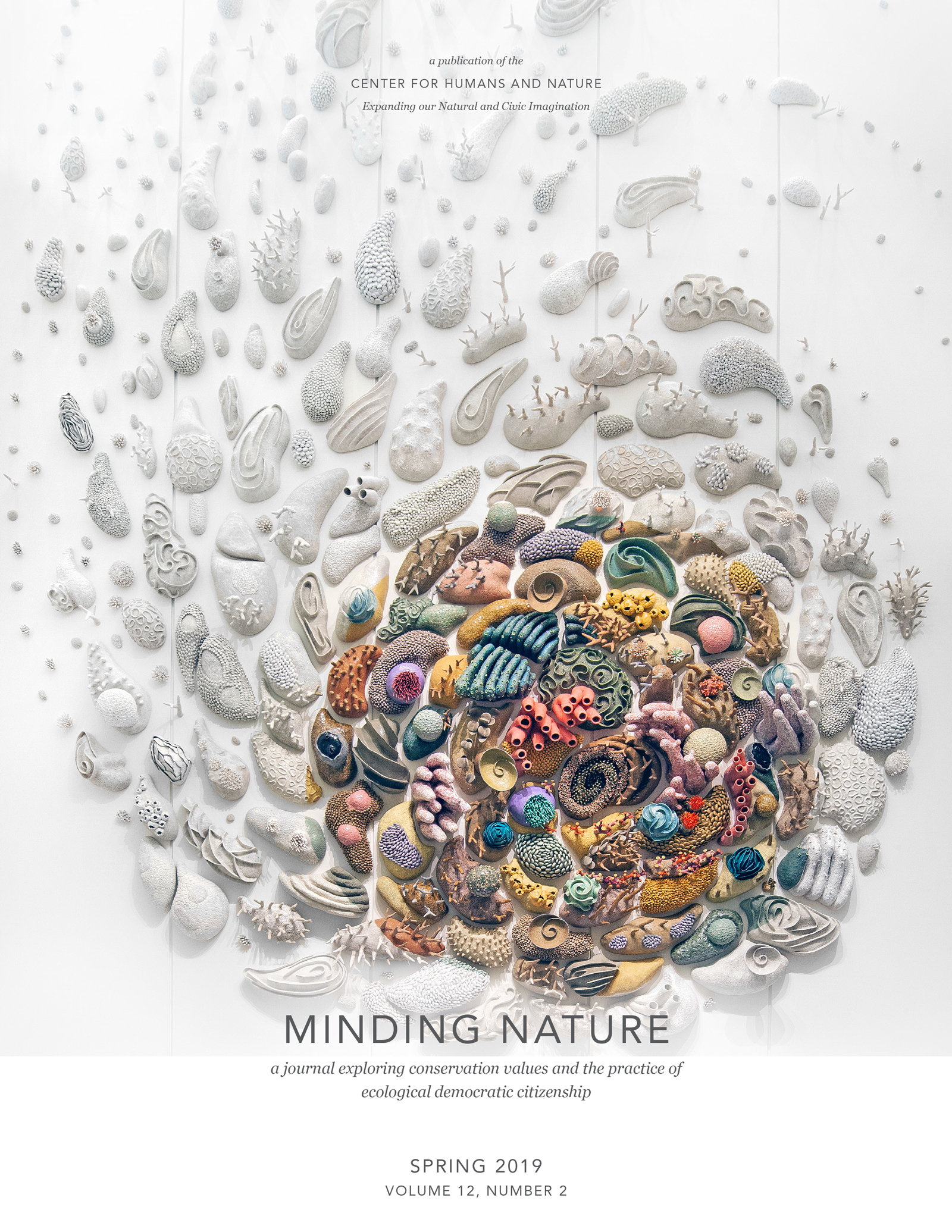 The Greening of Green

An observation by the poet/philosopher John Koethe is pertinent to the political predicament of climate action. “Each of us has a ‘personal’ perspective on his or her own life,” Koethe writes, “from which we can’t help but regard that life and its interests and concerns with tremendous seriousness, and which invests them with an importance informing almost every aspect of our deliberation and practical reasoning. Yet each of us is also capable of self-awareness and of mentally ‘stepping back’ and regarding that life and its concerns from an impersonal perspective.”

Art in the Anthropocene

The Center for Humans and Nature has been probing the role art, and aesthetics in general, can play in exploring and promoting human responsibilities in relation to nature—the whole community of life. As part of this investigation, we began featuring in our publications artists who have a passion and mission focused on the humans and nature relationship.

When America Smelled the Roses

In the fall of 1911, a small, heart-wrenching novel set in New York City found its way into American bookstores. Titled The Nine-Tenths, it depicted a movement—like the Occupy Movement which began in the same part of Manhattan precisely one hundred years later—that worked on behalf of the roughly 90 percent of Americans who were being left behind by an increasingly wealthy but deeply stratified society. Loosely based on “the uprising of the 30,000,” a militant strike by mostly immigrant, female garment workers, it recognized not only inequality of income, but unmet needs of a less material nature.

I pick up chicken feathers and tie them together. Stick them in pots. Wrap them in grapevine. I watch the down move with the breeze. The robin with the window-damaged eye sings from the garden fence while the oriole harmonizes in the black walnut. The hummingbird drinks from the feeder and the raccoon hides under the chicken coop. I sit vigilant—watching, listening, absorbing—the stones cool beneath my feet. A coyote skirts the back of the soybean field and ducks into the woodland. The trees around her dance. They whisper their memories, their needs, their knowledge.

There Is No Magic Wall

Humans, non-humans, and DNA; boats and beaver dams and human dams; dinosaurs, mitochondria; mountains and rivers; cyanobacteria, oxygen, and hydrogen—all together, entangled in webs of ecological, evolutionary, and perceptual connections and interactions and dependence and kinship, all existing as mosaic beings, with no circles around groups, no dots representing species, and nothing labeled “nature” or “humans.”

Everyday Animals, or Why Not Kiss a Worm?

Let’s Be Chickadees. Pshht, pshht, pshht we call as we sit on the frozen ground so close to one another that we can feel the cold spray of our neighbor’s pshht.  In the distance I had heard a few black capped chickadees and gathered the group to try our luck at calling them closer. It worked. We sit talking to the chickadees, looking at them eye-to-eye, our breath mixing with their breath like some whispered secret.

One of the most widely recognized impacts of human activity on Earth is global climate change caused by trapped greenhouse gases that warm the atmosphere. Despite efforts by climate change deniers to debunk the scientific evidence, “97% or more of scientists agree that humans are significantly contributing to global warming and that global warming is happening now.” Geologically, glacial ice functions as a sentinel for this warming process. In addition to evidence of climate change contained in ice core samples, retreating glaciers are a visible marker of the impact of rising temperatures on the planet.

If Your House Is on Fire: Kathleen Dean Moore on the Moral Urgency of Climate Change

I first met nature writer and philosophy professor Kathleen Dean Moore in 2004. I had already dog-eared my copy of her first collection of essays, Riverwalking: Reflections on Moving Water, when she came through town to read from her next book, Holdfast: At Home in the Natural World. For three decades Moore taught philosophy in Oregon, raised a son and daughter, and wrote books about the natural world, including The Pine Island Paradox and Wild Comfort. Her intimate connection with the wild led her to feel increasing alarm over its destruction, and when salmon began disappearing from the rivers, Moore started to question the role of the writer in a wounded world.

Geologist Marcia Bjornerud’s latest book, Timefulness: How Thinking Like a Geologist Can Help Save the World, can easily capture your inner philosopher, scientist, activist, and writer. When I received this book from Princeton University Press, I was immediately intrigued by the book’s cover. I’ve always been fascinated by ideas that necessarily mix up life’s ingredients into creative nature stories, and this book does just that.

Walking a Path for Healing

I was eight years old the first time I saw a farmer. I was traveling with my aunt to visit family in Kankakee County, Illinois, when I saw an older black man plowing his field. He had a steady-moving horse, and I remember watching him stride alongside as this rich black dirt rose around them while they moved together over the land. I was fascinated. It was the first time I saw somebody in the field.

Metamorphosis is not a term typically associated with human animals. As dramatic as such transformations are, the idea that one of us might undergo the process of becoming, say, a tree, stretches the boundaries of the word. Our differences go beyond mere appearances and nutritional preferences, after all. This does not stop ecologist Gary Paul Nabhan from attempting such a feat, after having fallen hopelessly in love with the leguminous, desert-dwelling mesquite tree. His book, Mesquite: An Arboreal Love Affair, documents the journey.

Seeing Ourselves as a Part of Nature: A Reflection of Wide-Eyed Wonderment

Humans have been increasingly distancing themselves from nature in the name of progress. We have separated ourselves from the natural world as if we are not inherently a part of it. We dream of designing a world apart that no longer relies on nature. Is this because of an incessant need to prove to ourselves that our existence is superior and meaningful? To show we have an agency over our lives that other beasts can never possess? We have been running toward the technological power of our species and away from the core of our existence, nature. We have separated ourselves from nature, built our walls, and proclaimed our dominion over all that the world could possibly offer.

A Celebration of Creative Complexity

Call of the Reed Warbler, Charles Massy’s new poetic tome on regenerative agriculture in Australia and beyond, is several books in one. It features profiles of innovative practitioners told in a memoir format that also draws heavily on Massy’s doctoral work in human ecology. It’s an ode to abundant and self-willed ecosystems, and at the same time, a celebration of the role humans must play in restoring environments.

Like cities, coral reefs pulse in a frenzy of activity. Residents of these diverse habitats find food, shelter, and mates within their structures. Weary travelers find respite in their outcroppings—oases from the open sea. From the tiniest snapping shrimp to the largest whale shark, coral reefs are sanctuaries for life’s exuberance. In reefs as in cities, each individual plays a role that can affect how the ecosystem functions. The key to success is finding harmony in heterogeneity—unity in diversity.

Rachel Poliquin, in her 2012 book, The Breathless Zoo, writes that “taxidermy is deeply marked by human longing,” revealing our hopes and dreams about our place in the natural world. Natural history dioramas present a carefully constructed, perfectly encapsulated and controlled experience of nature, revealing as much about humanity as about the nature depicted.

You Are a Tender History of Ice

Walking out our front door is like stepping in. I’m constantly reminded, and overwhelmed, by the abundance of this glacially carved valley. We share our evenings with moose and brown bear casually walking through the yard. Eagles soar high overhead; varied thrushes remind us we made it through another winter. The vibrant hues of blueberries, cranberries, and salmon fill our shelves and freezers. We bring outside in. We share this bounty with friends and family and rejoice in how lucky we are to have such delicacies. We hardly know our own good fortune until we leave home to visit other places, and then we are fully reminded of the gift of good land—reminded to listen, practice patience, honor tradition and culture, and pay close attention to the interwoven connections of this place.

we pulled off the highway on Exit 88

on our way East from the West,

our shadow slipping through the night.

What Gould’s Magpie Has Stolen

For its feathers, the prism of light

that broke its blacks into iridescence.

The slap of a beaver tail, the screech of a hawk

The slow thunder of tree root pushing through soil.

When the pot lid of night slides into place

When the frogs shout their one-word love, “Me! Me! Me!”

When the moon and the stars get down to business

Nothing is one thing.

Everything is something else.

All summer the mountain wildflowers

Birthed into the blue challis

What’s incomplete in me seeks refuge

in blackberry bramble and beech trees,

where creatures live without dogma

and water moves in patterns

The powerful provoke the powerless

to push against one another.

Their power grows by keeping us

in all kinds of prisons.

my father picked them up,

politely, as if to apologize

for their locomotion issues,

Some hardship curved it into

along a resolute stem.

Nature teaches nothing is lost.

do we see they are lined with fuzz, shaped

to each vividly hued bean