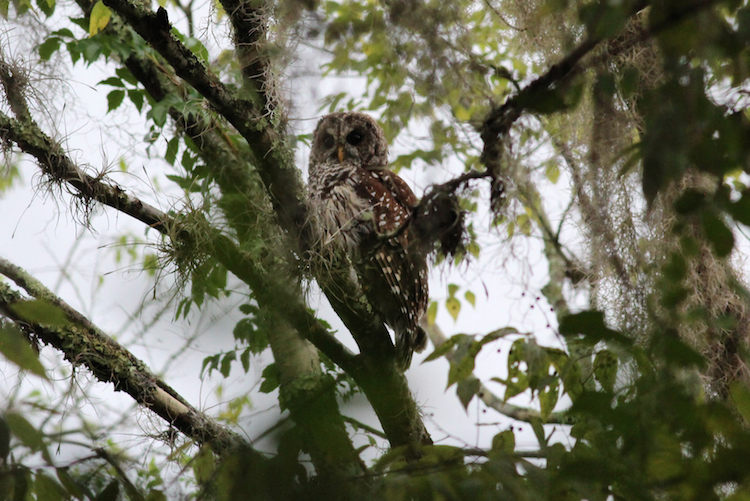 When I lived in New York City, I’d lose myself in the green, rat-friendly wilds of Central Park. It was surreal to find a depth of silence there, among millions. But today I can think of no better place to walk off my bouts of private dread than Central Park in Plantation, Florida. Like any number of South Florida spaces, this one is a landscaped confection with trimmed, chemically treated fields and a manmade lake with a spouting fountain. A miniature hill borders the lake’s west side and is the only swath of elevated land that I’ve seen in South Florida’s lurking flatness. The park is a hub for youth sports, joggers, walkers at every stage in the human lifespan, cyclists, and Cub Scout hikers. It’s an open, part feral, part human preserve. The occasional candy wrapper will mix with clam shells littering the lake banks (freshwater clams are a favorite delicacy of the resident geese). A more ethical alternative to the family zoo visit, here you’ll have the privilege of listening to the monk parakeets shriek from the trees and watching moorhens root for worms. 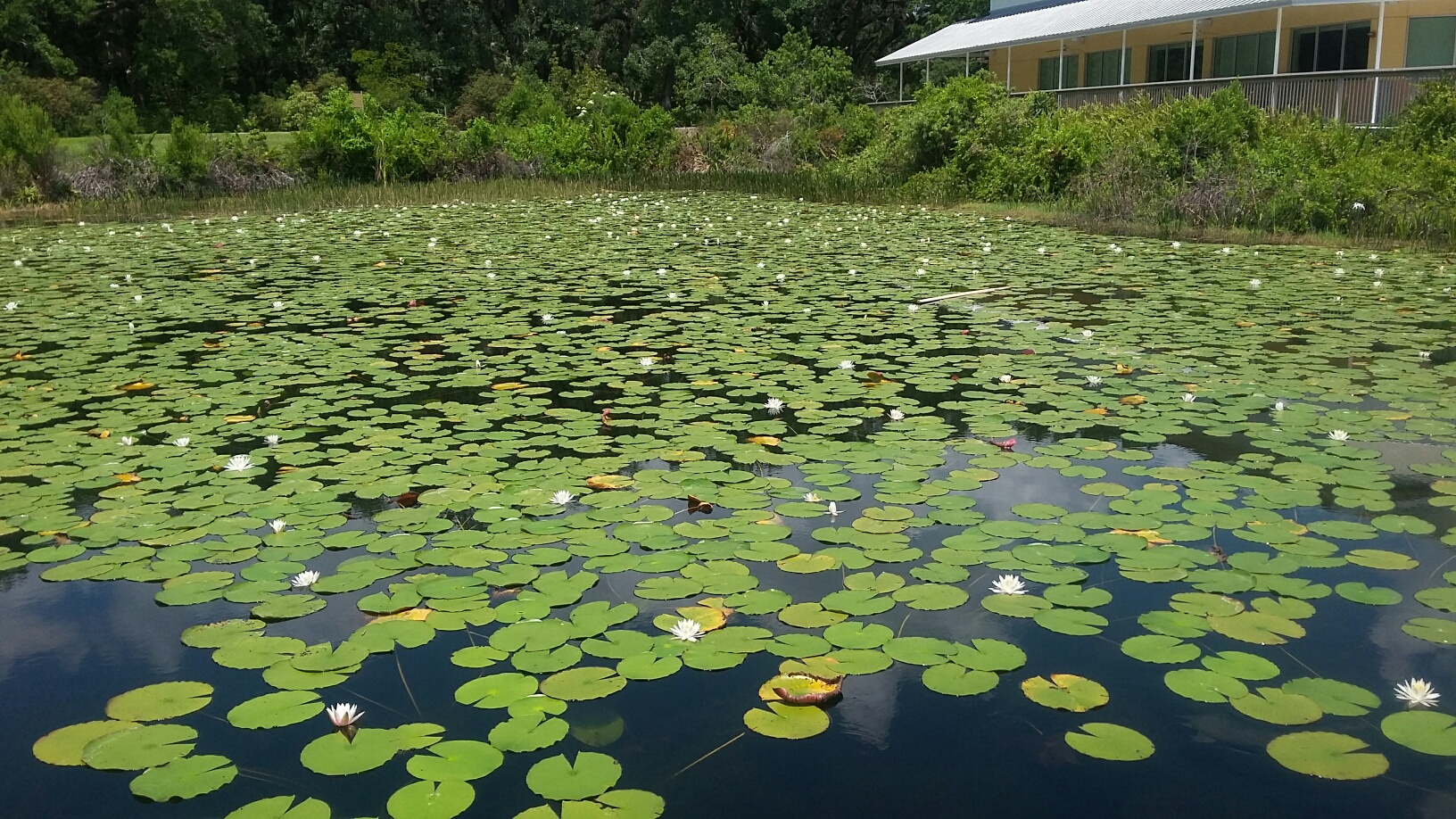 More hardcore outdoorsmen can wander in the viscous heat of the region’s wilder protected wetlands. For me, a moderate naturalist, walking around Central Park or even the average South Florida neighborhood provides a daily nature fix. In my years here, I’ve been crowded and canopied by native and non-native plant and animal species alike. I marvel at the collective daily exercise in wildlife management. Constant landscaping (one of the state’s more robust industries), chemical treatments, pest control and trapping efforts haven’t beaten back the Brazilian pepper tree, iguanas the size of cats, python snakes in the Everglades, and, the latest antic of exotic pet fetishists, Nile crocodiles. The native wildlife isn’t any less vigorous: the lusty ducks and geese, lizards hatching on condo terraces, houses half-entombed in vines—these mark for me the subtly violent encroachment of nature in a waterlogged land, and the way nature will prevail over all of us. 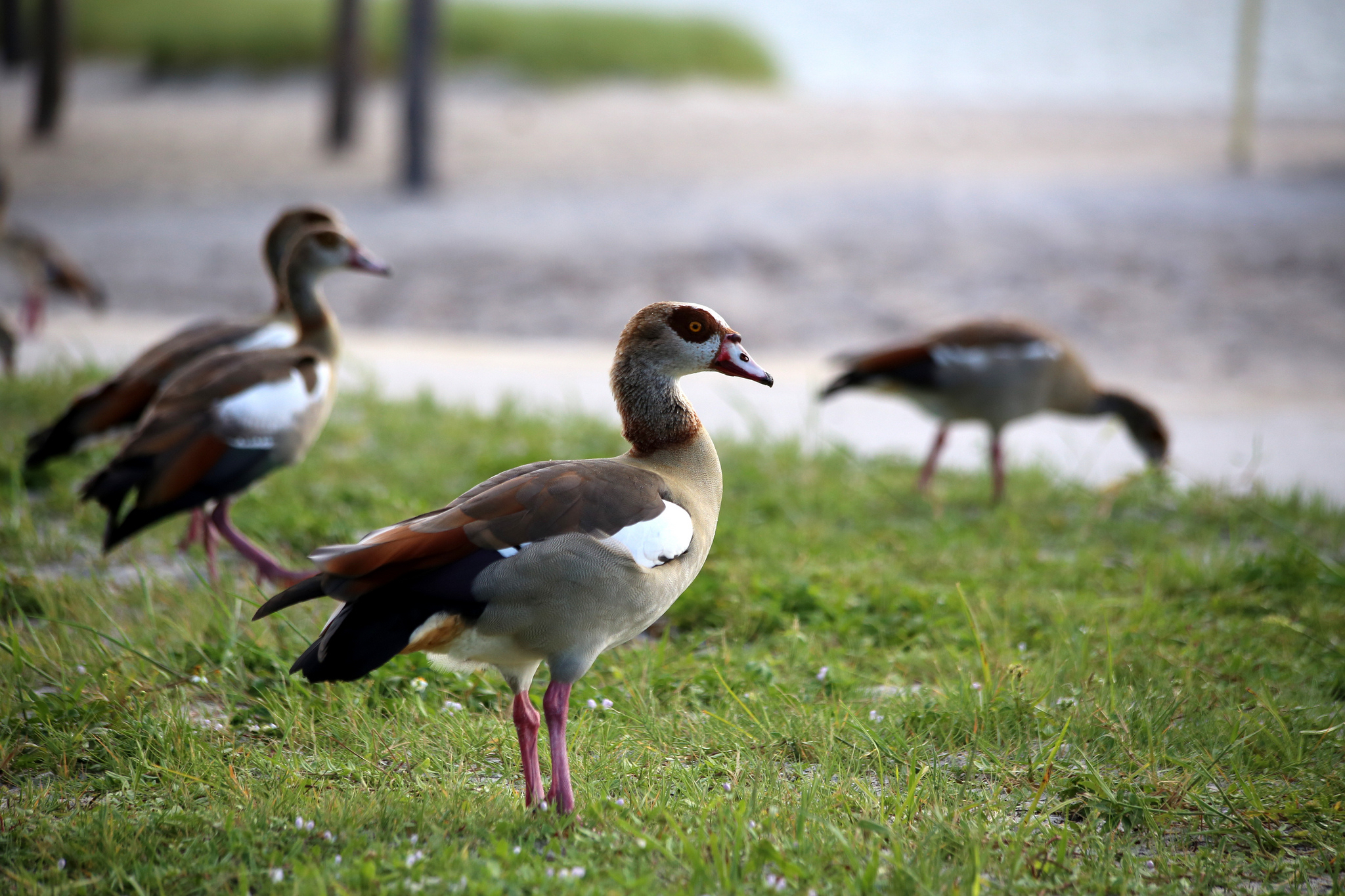 My own home is embedded within this pageantry. Therapy and meditation have helped me accept the American cockroach, or, more benignly, the palmetto bug, as a suffering fellow creature. I can watch a lizard flaunting its bright dewlap for a few slow minutes. My 8-year-old son has a sensitive radar for detecting his parents’ murderous intentions toward any living thing found inside the house. “Don’t kill it!” he’ll yell. “Give it back its life,” my Yoga teacher advised about our uneven power struggle with homebound pests. So, instead, (though I’m still no Jainist) we nurse, rescue, release.

A flare of green on a concrete driveway recently turned out to be a lizard, possibly a Cuban knight anole. It was frail and exquisite, and stopped in its tracks by some injury. My son and I offered it a stick. The anole wrapped itself around it, the way a newborn grips its mother’s thumb. We carried it to the edge of a canal where a group of bloated ducks roam, and where ibises sleep in the overhanging trees. Neither bird posed a risk to our new friend. This is the sort of rescue I imagine most of us would want, to have someone ask, Where would he thrive? What is his source? Near the water sounds good. South Florida is a better place to live or die than most. 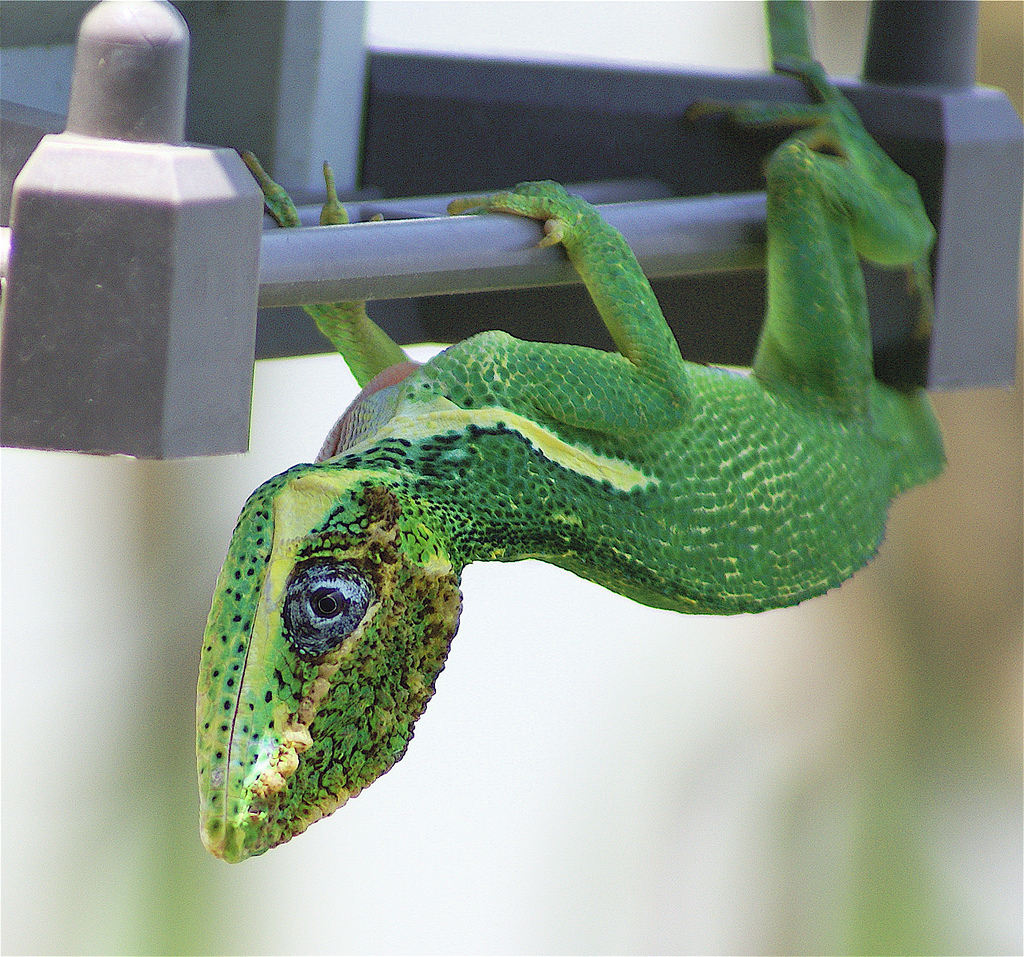 When I first moved here from New York, I was almost repulsed by this engulfing, sub-tropical world, particularly its feral converts. A pack of pitch-black feral cats colonized the small development where I lived. They’d birth litters in the golden bromeliad and tear at the trash bags left on the street for pickup. Then one of them died on my front deck. I walked outside to fetch the newspaper when I saw it stretched out on the wooden boards. Its green eyes were open and stilled. I couldn’t tell if it had died peacefully from illness or writhing with some undetectable wound. It looked, in death, like it had once moved with great precision, following instinct, until someone had ordered it to find my front deck, lie down on its side in perfect angles and die with a view of the sycamore beyond my gate. Learning no county service existed to dispatch the body, I forced myself to scoop it onto a large dustpan and left it on the curb near the trash pickup. As a child in Venezuela, where street dogs and cats mingled easily with pedigreed pets and people, I would have buried the expired cat. As an American adult living a sanitized life, I wanted the cat gone and resented it for reminding me of my own transience. Now it is fifteen years later. As I sweep up the husks of dead millipedes on my floor, not to be transient seems as ridiculous as it does terrifying.

E.B. White wrote, “...[There] is certainly a great temptation in Florida to duck the passage of time. Lying in warm comfort by the sea, you receive gratefully the gift of the sun... This is true seduction. The day is a circle—morning, afternoon, and night... I could ride clear around the ring of day, guarded by wind and sun and sea and sand, and be not a moment older.” This is the visitor’s seduction, and perhaps the struggle to survive in every crevice here escaped Mr. White’s notice. Just yesterday I watched a lizard hold in its mouth a black fly the size of its head. The ill-fated insect’s wings protruded. But with every grinding movement of its jaws, the lizard had himself a meal to digest for days. Death generates life in this developed swamp. Despite our human sprawl and intrusion, the ecosystem works.

The highly adaptive raccoons understand this dance, manipulate it, and cling to their lives with finesse. They live among us, and among the local trappers, with brazenness and perhaps a little affection for their human neighbors and the garbage we produce that helps sustain them. They pry the marshmallows out of the live animal traps without being caught. They do their business in our pools, scaring human bathers away who don’t want to risk catching the rarely documented ringworm infection linked to raccoon feces. They lumber around our mowed landscapes past midnight, but with the sure-footed rhythms of self-entitlement (I’ve watched them on sleepless nights from my window). They are known, along with so many other local species we’ve forced into co-habitation with us, as “nuisance wildlife.” In private communities around the country, they’ve started small, territorial wars. Outsmarting removal and helped by trapping restrictions, they often win. We have, after all, developed our way into territory that was theirs. 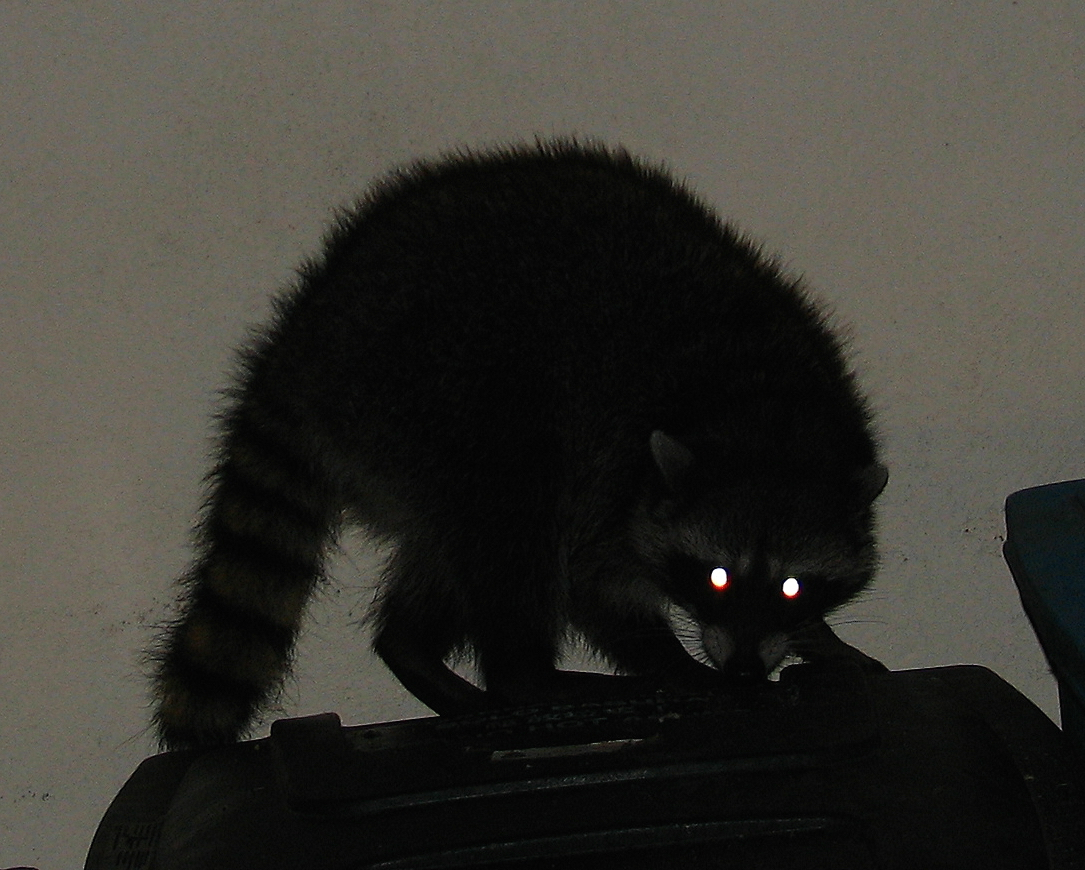 The theater of local flora and fauna—its cycles, its petty barbarism (like the sight of geese attacking helpless ducklings), its opossums, feral cats, and blooming geiger trees—is also enough to get you up in the mornings when you’re unemployed (as I am). Moss-draped live oaks, slash pines, gumbo limbo trees, jacarandas, areca palms—their flare and sprawl have become my favorite architecture. Every day at dusk, I walk around the lake in Central Park. If I need a stronger tonic, I simply venture under the frangipani tree outside my home and smell one of its flowers. I live on the edge of an age-restricted neighborhood, where a dwarfing silence descends after 8:00 p.m. It is then, or later, that I go out for a final stroll past the low-flung dry-wall houses. Under the cover of trees and moon and the occasional owl perched on a branch, I think my newfound pantheistic thoughts. The wilderness around here, managed and unmanageable, will bewitch anyone after a time. I am, fortunately, no exception. 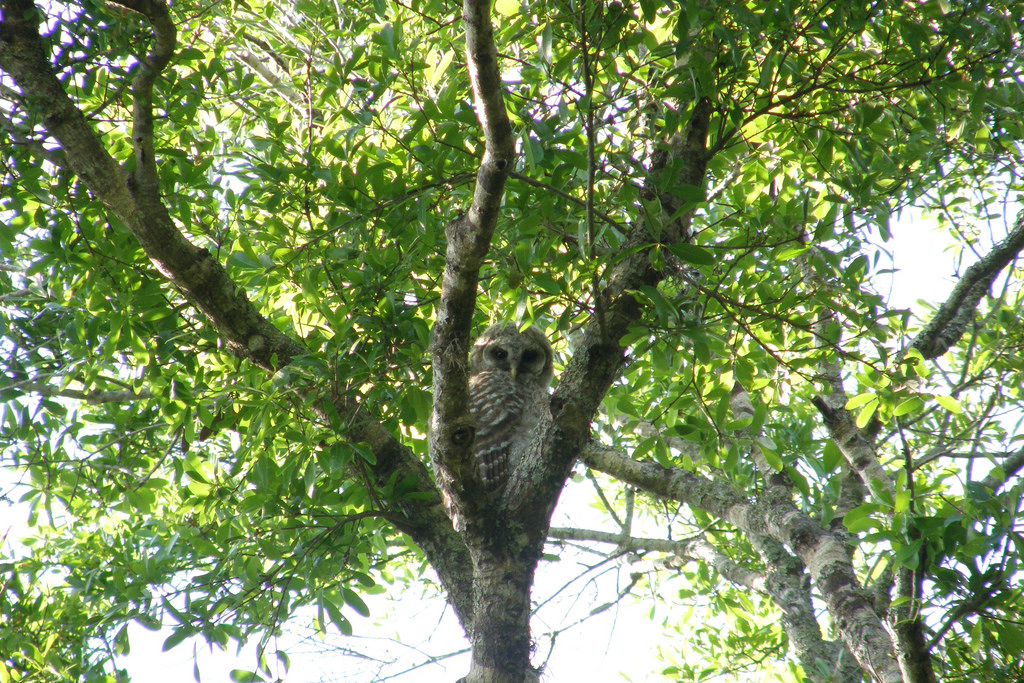 Tal Abbady is a freelance writer in Plantation, Florida. Her work has appeared in The New York Times, The Los Angeles Times, Dame Magazine, BBC Travel and other publications.