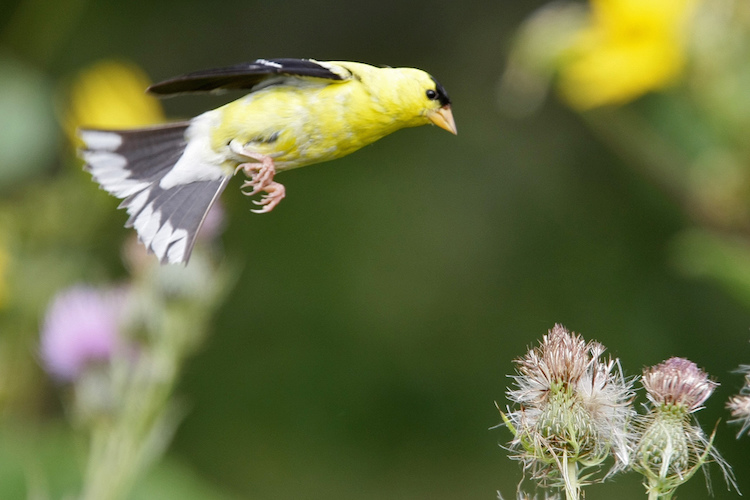 As anyone who lives in a Path of Totality city and has an extra room to list on AirBnB already knows, a solar eclipse shadow will sweep from west to east across the United States on August 21st. All along that 70-mile wide, 14-state swath there will be a brief period of night in the middle of the day, as well as sky-high rates for lodging. The last time our continent hosted this event was June 8, 1918, so as you can well imagine, there’s some pent-up demand on the part of umbraphiles, the technical term for eclipse enthusiasts.

Driven by fascination or curiosity, ignoring what they’ve known since childhood—that you should NEVER, EVER look directly at the sun—many people will do just that as the moon slides like a lens cap over our neighborhood star. These onlookers are hoping to see the sun’s corona, maybe even a solar prominence. If they’re smart about protecting their retinas and post-eclipse vision, they’ll use proper solar-viewing glasses, thousands of times darker than regular sunglasses, or telescopes equipped with special filters, or pinhole cameras.

In my corner of North America, there’ll only be a partial eclipse (91%). I haven’t made any plans to travel for a better view, but I’m not too bummed out about it. All summer long I’ve been blinded, temporarily, on a near-daily basis by the solar flare of male American goldfinches (Spinus tristis) as they jet from a leafy perch into the troposphere, escaping the gravitational pull of a suburban shrub or a weedy urban remnant patch. Their undulating flight pattern only adds to the illusion of a plasma flash. 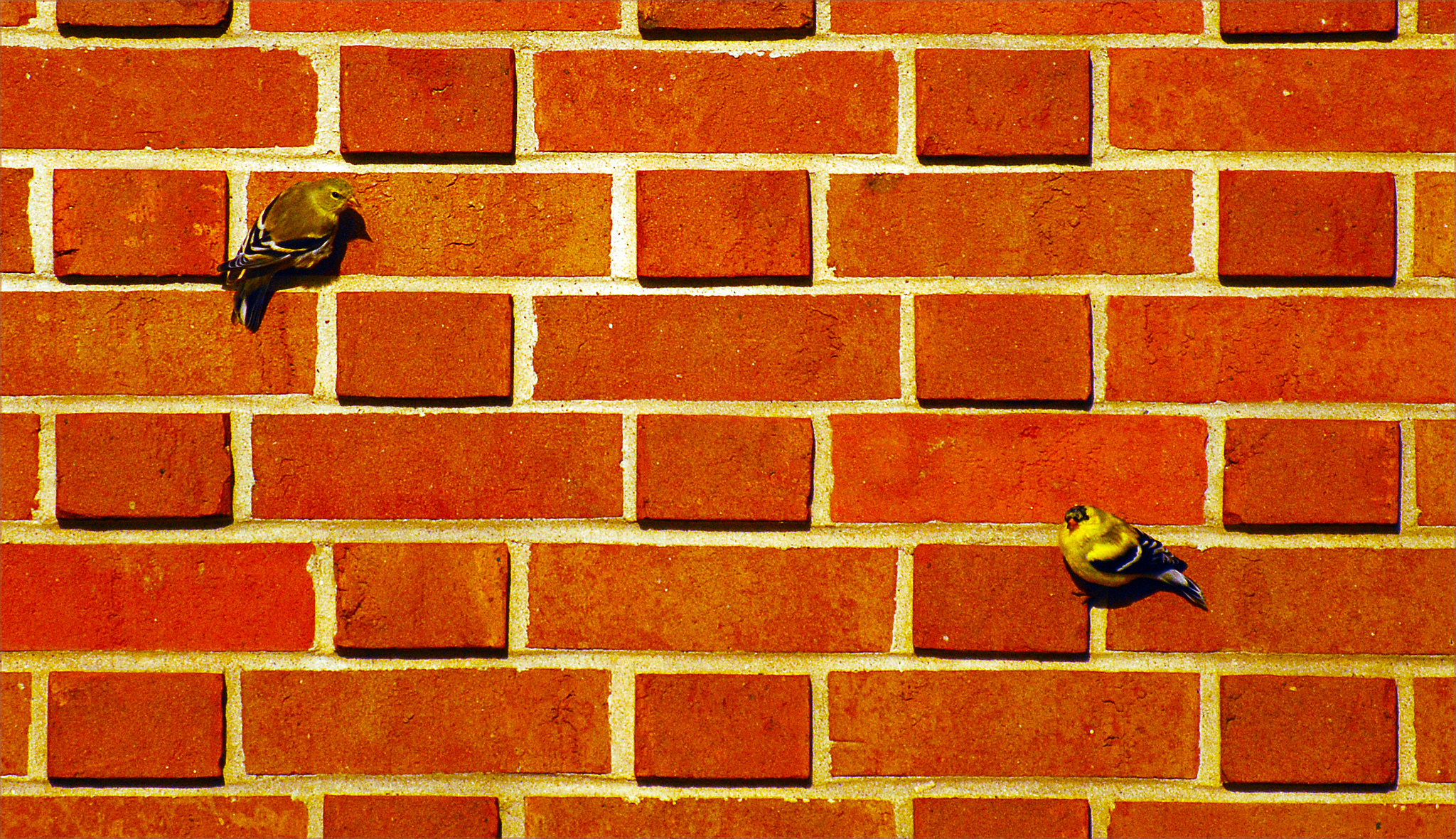 Goldfinches can be found throughout the majority of North America, from Canada to Mexico, for at least part of each year. In the middle third of the continent, they are year-round residents. This mostly migratory species wings back and forth over the same landscapes that will darken this month when the moon passes between Earth and Sun.

Cities, with their easy access to food, drink, and accommodations, are an attractive rest stop for both human and avian travelers. Sometimes a tourist will be so charmed by the new locale they’ll decide to become a resident. Goldfinches have certainly embraced metropolitan living; in fact, the same suburban sprawl that has proven so harmful to many wild species, and to Neotropical migrants in particular, has been a boon for this bird. The built environment’s abundance of solar mass and heat island effect has expanded potential winter habitat, and human settlements create ideal conditions for devotees of backyard bird feeders.

One of the strictest vegans in the bird world, goldfinches have a cone-shaped beak that aids efficient seed selection and consumption. These busy little sunspots will flock to any place with thistles, dandelions, cosmos, sunflowers, and aster seeds on the menu. Insects are ingested only by accident. 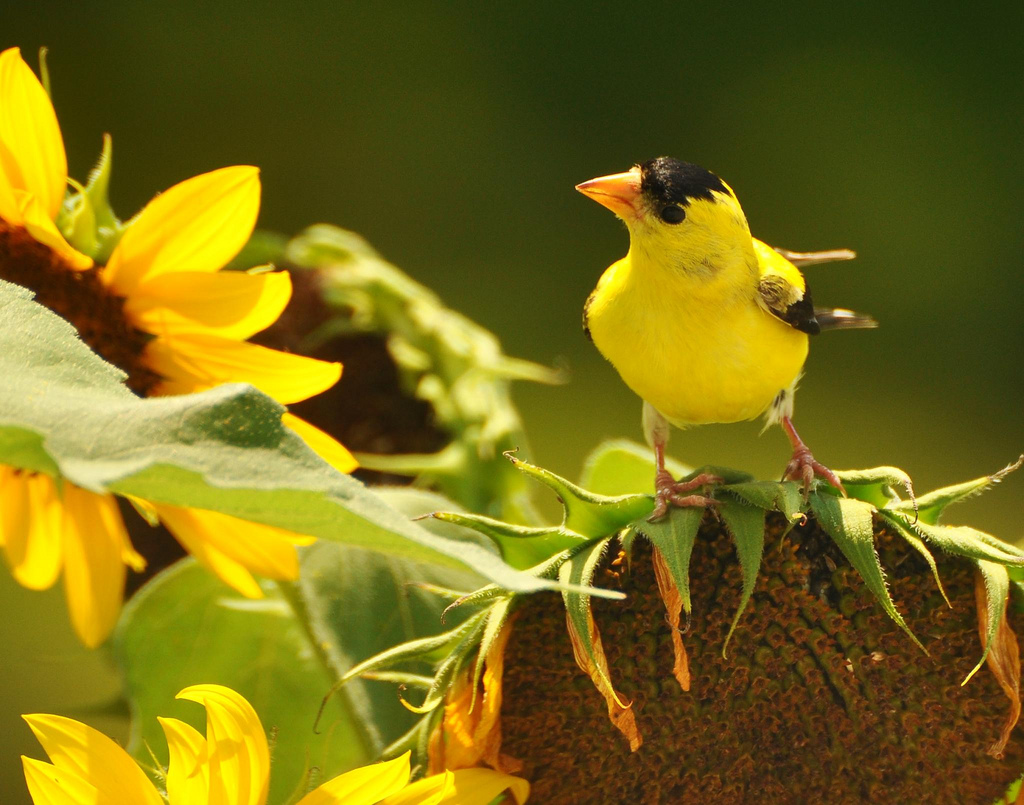 Nest building doesn’t begin until late June or early July, when many other songbirds are already on their second batch of offspring. Goldfinch couples shop for building materials together but the female is in charge of construction. First she’ll choose a building site, with preference given to a shrub close to a sunny edge, rather than in a shady forest interior.  Fashioning her nest from bark, vines, and grass, she reinforces the rim with spider webs and caterpillar silk then lines the interior with downy milkweed, cattail, and thistle fibers. Approximately six days later she’s got a cradle so tightly woven there isn’t room enough for daylight between the warp and woof.

Female goldfinches incubate a clutch of 2-7 pale blue eggs, sometimes speckled with brown, for about two weeks. These youngsters grow up fast—they’re ready to leave the nest in 11-17 days, although they continue to receive parental support for another 3-4 weeks after fledging. Unlike most granivores, who typically start life on a protein-rich diet of insects and other invertebrates, goldfinch nestlings eat the same all-seed diet as their parents. This trait seems to inadvertently provide some protection from the brown-headed cowbird (Molothrus ater), another common urban ecosystem neighbor, and one that practices brood parasitism. Female cowbirds will lay their eggs in other birds’ nests to be raised with adoptive brothers and sisters, often outcompeting them for food. But cowbird chicks can’t survive on the seedy groceries their adoptive goldfinch parents bring back to the nest. 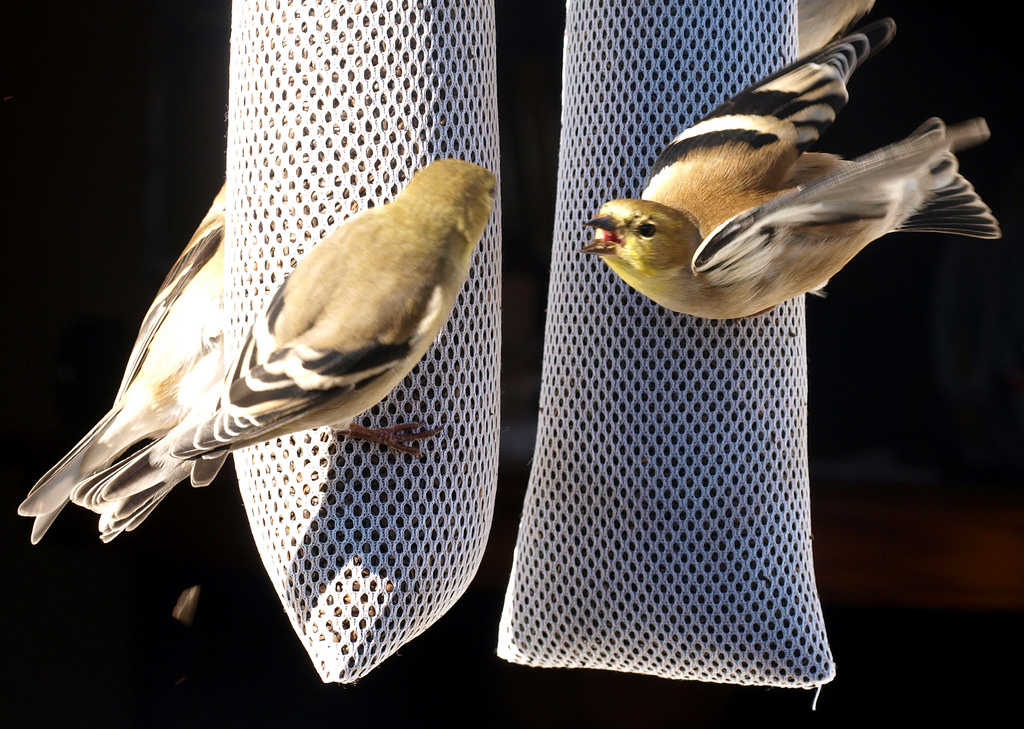 Goldfinches are sexually dimorphic, which is simply another way of saying males and females have one or more distinctive physical features (in addition to their reproductive equipment) that set the sexes apart. As with many other types of birds, a goldfinch’s gender can be determined by their feathers. During breeding season, the male’s incandescent plumage is easy to spot, a glowing corona against the dark greens of summer foliage or a bright cornflower blue sky. The female’s wings are striped like her mate’s, and the scarf at her throat and breast mirrors his lemony palette. However, where he is bright as the sun in mid-August, she wears a softer, yellow-tinged khaki tan.

Boy or girl, the gold they wear isn’t an inheritance or dowry; it comes from carotenoid pigments in the meals they eat. Without these organic red, orange, and yellow compounds in their diet, goldfinches will quickly dim from 24 to 10 karat—which is exactly what happens in winter. Both genders become drab imitations of their breeding-season selves as their food options change. While the coloration difference between males and females is no longer night-and-day stark, it’s still visible to the naked eye. No special lenses or filters needed.

You are what you eat, as the saying goes, and so are goldfinches. Converted into an amazing variety of forms—sunflowers and sushi, thistles and tomatoes, bluegrass and beef, dandelions and ducks—all we ever really eat is sunshine. It just beams more brightly through some of us than others.

This week, thousands of humans will migrate from across the United States and beyond to stand in awe while the moon slips silently between our blue planet and a yellow dwarf star riding the Milky Way Galaxy tucked in the crook of Orion’s Arm. Who can blame them? It’s a once in a lifetime event. But let’s not forget to marvel at goldfinches, too. They travel far, brightening our cities and suburbs with a concentrated dose of sunshine that’s easy on the eyes… and we don’t have to wait 100 years to see one.