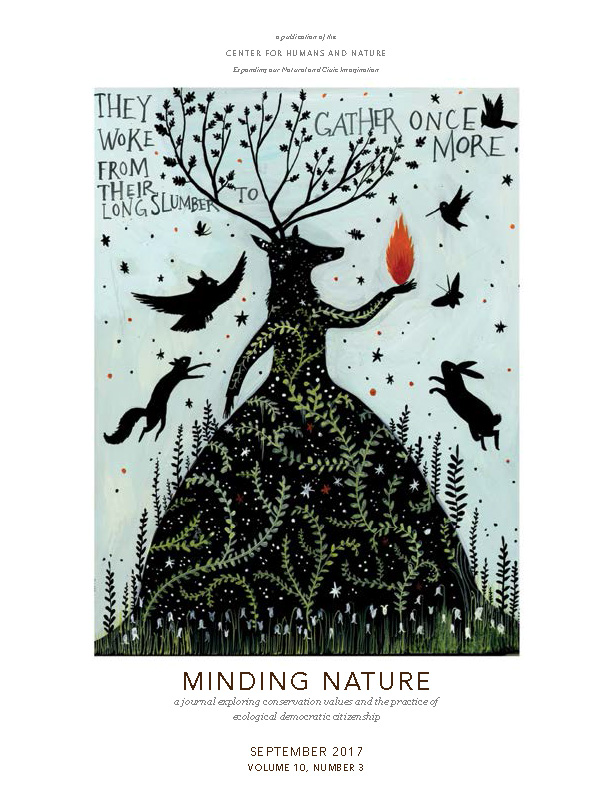 Every four years the federal government produces a National Climate Assessment. The latest study has been scientifically approved and is ready for public release, if the Trump administration does not suppress it. According to a copy obtained by the New York Times, the report affirms that the average temperature in the United States has been rising rapidly since 1980. It notes recent advances in attribution science that link climate warming in the United States to aspects of regional and national weather patterns, such as longer and more severe heat waves, more severe rainstorms, and drought. These are events and trends felt by ordinary people, who are economically and socially affected in tangible and direct ways.

A regular feature calling attention to important books and articles that CHN staff, board, and collaborating scholars are reading and recommend. Quot libros, quam breve tempus.

Democracy and the Climate Crisis

The heated U.S. 2016 presidential election is over, but the resulting political polarization has brought forth fresh concerns over democracy’s ability to heal this country’s many social, economic, and environmental ills. Worldwide, socio-economic and political orders are coming under more scrutiny; citizens are expressing greater discontent with the credibility of governmental leaders; and voters are increasingly dismissing the status quo and seeking new forms of governance. Additionally, there are real concerns about whether democracy as a system of government is fundamentally capable of addressing the very palpable climate crisis.

Welcome to Planet Water: Time for a Reverential Rehydration Revolution!

Here on our so-called Goldilocks planet, amid the vastness of our Milky Way galaxy and beyond, the provenance of the adage “location, location, location” has never been more apropos. As we orbit our gigantic starry nuclear power plant, fusing hydrogen atoms into helium, showering massive amounts of energy with the dizzying speed of light, our heliocentric planet is perfectly placed at 93 million miles away; thankfully, we are neither in the Venus nor Mars location.

My upcoming book The People’s Water begins with “A Journey with Water,”which tells the troubles and triumphs of galvanizing communities and restoring water systems through my experience as an artist and activist. The second part of the book is the “Toolkit,” which invites readers to embark on their own journey with water. It covers effective organizing, team building, and citizen empowerment, enhancing understanding with fun and easy-to-read graphics, diagrams, and cartoons. (See the accompanying article, “A Water Toolkit.”)

This toolkit is a set of stepping-stones, guidelines. The goal is to give you ideas and information to restore the place of water as the foundation of planning and design in your towns and cities. We identify social, biological, and technological processes that can promote resilience, complexity, flexibility, and capacity in human and natural systems. This is not a philosophical or an academic perspective, it is a real world experiential perspective that has evolved from my work and the work of Margot Young.

A Conversation on Wildness

The following conversation took place at the Seminary Co-op bookstore in Hyde Park, Chicago, on June 23, 2017. Gavin Van Horn (GVH): I’ll start. At least for me, the reason I was interested in this concept of wildness is because I’m interested in how people connect to place—to where they are. To me, wildness represents a mutual flourishing between ourselves and the landscapes we find ourselves a part of. That’s not the only thing wildness is, but that’s certainly one of the reasons it’s important to me.

There is wildness where I’m sitting at the moment, a glade in Eggers Woods on Chicago’s Far Southeast Side, surrounded by a mix of American elm, shagbark hickory, bur oak, and sugar maple trees whose leaves flicker in the sunlight. It’s the kind of place that offers a glimpse of Chicago before there was a Chicago, one of the many parcels that compose the nearly seventy thousand acres of the Forest Preserves of Cook County. The preserves, along with parks, gardens, backyards, golf courses, cemeteries, and railroad rights-of-way, form the green threads that stitch wildness into the city’s fabric—that make the city a living place.

On the Wild Edge in Iceland

Picture a country hanging from the Arctic Circle, where at least 80 percent of the people leave room in their minds for the existence of elves, “Huldu-folk” (hidden people), or other netherworldly creatures; where wild means vast stretches of grayness: gray, craggy mountain peaks, gray gravel, and gray ash from yesteryear’s volcanoes. If you imagined Iceland, you guessed right. And I was heading north into that gray. I drove on roads carefully designed by the Icelandic Road and Coastal Commission, around bends that intentionally avoid the presumed dwellings and churches of elves and hidden people.

The Edge of Anomaly

Our four-car caravan leaves the creekside parking lot, winds across the valley, follows the curves of a narrow road, climbs up a bank of steep, oak-forested hills, and rolls through open pastures and upland crop fields toward the ridgetop farm of Joseph Haugen. Most of the twenty university students have no idea where we are. There is no reason they should. Some have come from ten thousand miles away. But here we are, a few miles from the Mississippi River in western Wisconsin, heading to a small farm where eighty-eight-year-old Joseph now lives alone.

On July 27 we lost our dear George Rabb—a board member for the Center, a conservation leader known for his extraordinary work worldwide, a beloved Chicago elder and mentor.

On A Force Of Nature: An Interview With Arthur Melville Pearson

Arthur Melville Pearson and I are at the Gaylord and Dorothy Donnelley Foundation offices where Arthur works as the Director of its Chicago Program....From the enclosed balcony on the 26th floor on which we sit, we see the glistening Chicago River and occasionally two peregrine falcons hovering in search of prey. In the midst of the city, we are pleased to see that magnificent creatures and natural areas are in evidence. It is a good place to begin our discussion about Arthur’s biography of George Fell, a man who dedicated his life to reminding future generations of the necessity of preserving the presence of nature in our lives.

The Trees of Maine

The original forest in New England, New York, and Pennsylvania covered nearly 100 million acres. Four hundred years of civilization have left the following: 72 percent forests, 23 percent cleared for farms and pastures; 5 percent urbanized. Not so bad, you say, still some 70 million acres of trees left? Well, of the remaining forest, Lloyd Irland says in The Northeast’s Changing Forest that only about 5 million acres are preserved for wilderness—notably the Adirondack Forest Preserve, sections of the Green and White Mountains National Forests, and Baxter State Park.

The ancient practice of geomancy holds promise as a surprisingly contemporary model for adjudicating humans’ relationship to nature. This is because, among other things, it presumes that a true union of humans with the natural world is not given but earned, practiced. The relationship between humans and nature consists of a dynamic, unpredictable process, which is irreducible to static founding assumptions, such as linear material causation.

On the Cover: Diana Sudyka. Diana is an illustrator, and printmaker from Chicago, IL who creates work for book and album covers, screenprinted gigposters, and original watercolors. More of her work can be found at dianasudyka.bigcartel.com and seen at The Tiny Aviary.