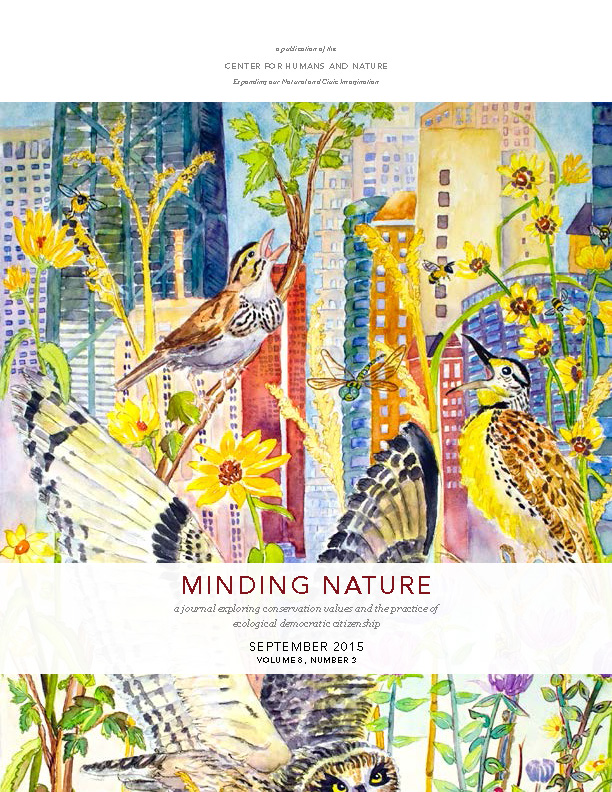 City Creatures (forthcoming November 2015) aims to reanimate Chicago in our eyes: to help introduce readers to the unexpected diversity of finned, feathered, scaled, and furry animals who live alongside us in the city and suburbs. And in turn, we hope that learning about these animals will inspire readers to care about and for them.

The following is a conversation between Gavin Van Horn and Dave Aftandilian, the co-editors of the newly released City Creatures: Animal Encounters in the Chicago Wilderness. Gavin and Dave recently sat down to reflect upon the Center for Humans and Nature’s City Creatures project, as well as the larger story of how animals connect us to place and peoples; animal agency and the numinous; their own essays in the City Creatures book; and what might come next for both of them.

The Song of Northerly Island

It was a meadowlark that introduced me to Northerly Island. I was pedaling south on the Lakefront Trail, passing the Burnham Boathouse on a borrowed bike in early June 2007, when I was arrested by a clear, varied melody—the unmistakable notes of an eastern meadowlark. I knew the song well; meadowlarks had nested for years in the meadows next to our longtime home in Barrington. But here in Chicago? How could a bird of rural grasslands be singing in the city?

The fox didn’t know it was tame.
I fed the fox; I provided the environment.
Just don’t hurt the cats, I warned.

From the Chicago Sun-Times, a story
about a North Side resident of Goose Island—
a little after six, Wednesday morning:
Found under a parked car
at a service center, a coyote
named Keegan.

Washed Up on the Shores of Lake Michigan

Lake Michigan is our not-Chicago. At its edge, our seemingly solid lives turn liquid, our streets must bend and end, and our busyness is watered down. For Chicago, the lake is the source of the rising sun. Then it is daytime’s spread-out sheen of blue or slate or green. And finally it is nighttime’s void, just out there, beyond the reach of city lights. It is dark matter, off the grid, the great pool of mystery amid our familiar.

Tickling the Bellies of the Buffalo

In metropolitan Chicago, it is difficult to imagine an unbounded, fenceless world of the kind that existed in this region a mere two hundred years ago. Prairie grasses that dominated and defined the area—with wispy stalks brushing the saddles of travelers on horseback, and roots extending ten to fifteen feet into the ground—are now scarce in this Prairie State. Remnants spangle the embankments of railroad right-of-ways, line the pockets of forgotten cemetery edges, and adorn larger forest patches and prairie savannas.

“Why do you want to work at a zoo?” I asked. It’s a standard question I ask people who are interviewing for a position. In this particular instance, I was not prepared for the answer. “The great thing about zoos,” she said, with a blend of nerves and smiling enthusiasm that is typical among job applicants, “is that for most people, it’s the first time they’ve ever seen a wild animal.” My mouth dropped open at how utterly wrong that answer was.

Why I Find Feathers Alluring

Growing up, three bothersome younger sisters drove me to seek beauty, knowledge, solace, fun, and wonder in the big woods surrounding our home. This was in a rapidly suburbanizing area just east of Seattle. I remember, at 14, crouching by an overgrown ditch along a busy road, watching a foot-long trout, motionless in the clear water, occasionally flicking out to catch an insect. Even during those early explorations, I remember feeling the enormity of life and my small place in it.

The Wildness of Being

Our indoor cat bangs on the closed blinds. Then stops. Seconds later she starts again and manages to open them by pulling the cord with her paws.

Is she hungry? No. She’s already had a midnight snack of dry food.

She wants to bird.

The Bear and Me

One morning recently I found myself crying while reading William Faulkner’s “The Bear.” It was a Saturday and I’d woken earlier than usual, just after five, and my brain was too busy to return to sleep. I’d read the earlier stories in Go Down, Moses during the week and had been planning to give some serious attention to the book’s centerpiece. What better time? It was a cold, dark morning, and I was secured under the blankets except for my head and arms.

The Nature of My Inspiration

I used to think that I needed to escape the city to experience nature. To me, the city of Chicago was a vast, looming mass of industry where one had to search through a steel maze to catch a glimpse of sunlight at any hour that wasn’t noon. I grew up in the southwest suburbs of Chicago, a place rich in protected forest and wildlife preserves. After living, working, and going to school in Chicago for the past four years, the environment in which I grew up and the environment in which I now live became two separate entities in my mind. This led to a general feeling of unease and anxiety in my life. I began to go through a list of “if onlys”—if only there were more trees, more plants, more wildlife. This list soon led to my art.

Never More than a Cedar Waxwing

If I said I live on ten acres in a nearly 100,000-acre area known here as the “Agricultural Reserve,” where might you imagine that is? Could such a place be twenty minutes from a movie theater or cafe? Yes, in fact the Reserve is essentially just steps beyond the swath of Washington, D.C.’s, urban/suburban landscapes. Humans in the Reserve are a community of both city mice and country mice, so to speak. And I think the same can be said for the wild creatures who live in the Reserve and who travel the geographic corridors of rapidly changing and humanized landscapes, whether those corridors are through green forests, alongside brown rivers, or above black highways.

When I was reviewing and selecting my favorite city creature photos for this post, my mind kept going back to a quotation about people-watching in Found magazine’s interview of musician Willis Earl Beal: When I’m watching people, I feel like I develop this powerful, almost God-like understanding of them. I can see deep within them. Of course, really, they’re becoming an extension of who I am. I don’t know what their story is, but imagining their stories is a way of exploring yourself.

Four years ago this August I left my apartment in Rogers Park, Chicago’s northernmost neighborhood, and walked all day long for two days, some 63 miles, hugging the shore as closely as was legal, to the Indiana Dunes National Lakeshore. Why would someone want to do such a thing? Walk though one of the most industrialized, polluted, dangerous, impoverished areas of North America? Alone?

More Than a Tree

When we moved into our house sixteen years ago, there were signs that the backyard’s towering silver maple was in decline. Little piles of sawdust at the base suggested carpenter ants were digging away at it from within. I knew that, one day, we’d probably have to cut the tree down. That day came on Wednesday, May 21st.

How to Know Where the River Is

The southeast corner of Harlem and Washington, where I often wait for the bus going north to the school where I work, is irrefutably urban. North across Washington an apartment building edges the sidewalk. Across Harlem is a gas station painted with a green never seen in nature and fronted with popsicle-shaped yews stuck in a bed of white gravel.

Of Bunnies and Babes

The seven young women couldn’t help but cradle the shivering beasts to their breasts as they marched from hutch to slaughterhouse. The girls were mostly early college aged—suburban raised, free range. Enrolled in a farm-to-table course at Sterling College, the seven had pulled the bunnies from the campus’s rabbit hutch. It was the first day of the course, the first time soft fur met smooth, twenty-something fingers.

Corner of Carl and Arguello

Shortly before midnight, a great horned owl announces its presence at the corner of Carl and Arguello Streets. Perched atop my apartment building, ten feet above the bed in which I lay sleepless, the bird punctuates the quiet night with its territorial proclamations.