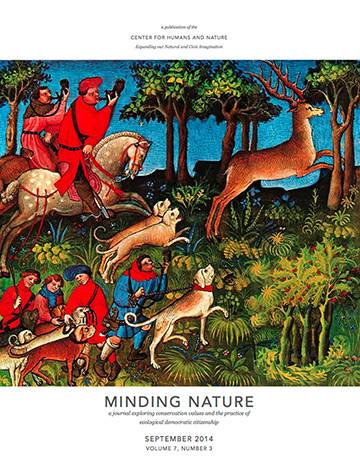 On the radio the other day I heard an oldie called “The Boys of Summer” by Don Henley and got to thinking about nostalgia and obsession, two of my favorite subjects. This is an intriguing song that mixes them in equal measure as the singer considers his lost love. It contains the following lyric: “Out on the road today I saw a Deadhead sticker on a Cadillac/ A little voice inside my head said/ ‘Don't look back you can never look back’/ . . . Those days are gone forever, I should just let them go but/ I can see you, your brown skin shinin’ in the sun . . .”

How do we (environmentalists, conservationists, nature-lovers) give voice to an ecological valuing of place that is so often marginalized by top-down modernist ideology? One of the key tools lacking for such environmental expression is an effective ethical linguistics. Stories on how lovely and significant natural places and those living within them are, tend to be misinterpreted. This is because the language available to share these heartfelt stories is squeezed into conceptual frameworks that analyze linguistic meaning according to rational principle.

I am a tiger. I was born in 1950, a Tiger Year according to the Chinese astrological calendar. In the past couple of twelve-year cycles, environmental organizations like the World Wildlife Fund and the Environmental Defense Fund have marked the occasion by using Tiger Years to focus public attention on the ever-more-dire plight of tigers in the wild, mounting ambitious educational and fundraising programs to save these endangered big cats, whose numbers in the wild total roughly three thousand.

Before I try to answer the question, Why hunt?, there’s a prior question that needs to be dealt with: Should anyone hunt? Hunting has aroused ambivalence and outright opposition for a very long time. Indeed, anthropologists are right to assert that wherever rituals arise there is bound to be anxiety and ambivalence. Certainly the rich tapestry of rituals surrounding the hunt in hunting-gathering cultures suggests that even then, when hunting was a necessity, there were qualms.

Wildness and Wonder: On Saving the Planet

For most of the world, the future seems fraught with dangers and uncertainties. We talk about the depletion of natural resources (including food and fresh water), the overfishing of the seas, the acidification of the oceans, the loss of wilderness and wildlife habitat, deforestation, the extinction of species, the devastating impacts of climate change, the demands of burgeoning population growth, a diminishing job market, the growing gap between rich and poor and the ravages of terrorism, war and unrest (to name just a few).

It is a day under the African sun. A herd of Thomson gazelles browses between Mopane trees. In the dry grass of the savannah two lionesses prowl closer and closer to the group. Their silhouettes become flatter, and they move more and more slowly. One step after another, yard by yard, they are working their way toward the herd. In a split second before the leader scents the hazard, the attack begins and the wild hunting starts. For a spell the pack is fleeing, but then it runs directly toward a waiting lion that has placed itself along the escape route.

“Elizabeth Thomas went to live among the Bushmen of the Kalahari in 1948 when she was still a young girl, and lived an enviable double life in two of the best human realms: that of the Neolithic hunter-gatherer, the Old Way, and that of a civilized Western intellectual. She went on to write a remarkable number of good books . . .” So begins one of the hundred brilliant little essays inside A Sportsman’s Library, Stephen Bodio’s own remarkable excursion down the rich Silk Road of outdoor literature...

What used to be called “the wisdom of the East” has seen better times. Way back in the twentieth century, one gray eminence declared that the encounter with Eastern philosophy would be the most momentous event in the history of the West. Now, while Asia has been transfigured by Euro-American technologies and political/economic practices, “The West” has yet to exhibit a reciprocal transformation, apart from a few pop-cultural tropes and poorly understood words like “karma” and “zen.”