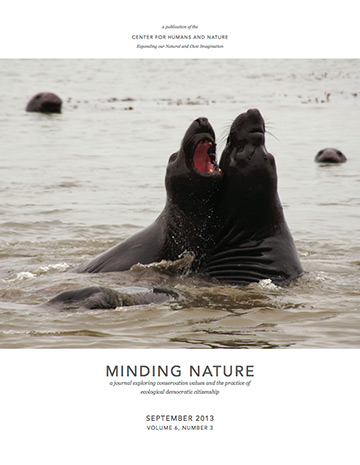 The Geography of Hope Conference has been held in the village of Point Reyes Station, California, since 2008 and has become one of the country’s most significant literary festivals. It brings, you might say, the natural and the cultural imaginations together for mutual invigoration and creative synthesis. Recent events of this ongoing program have explored the overall theme of “Practicing the Wild,” a notion that is understood not only with respect to the natural world, but also as an inextricable part of human character and culture . . .

It is dawn.
The sun is conquering the sky
and my grandmother and I
are heaving prayers at the horizon.

“Show me something unbeautiful,” she says,
“Try it.”

The Capacity for Self-Renewal

The exposed western shoulder of Mt. Wittenberg offered an expansive view of both geography and hope. As we exited the forest, naturalist Todd Plummer asked our group to pause and take in the land, the ocean, the sky. The contrasts startled me. In the forest, Todd tuned our senses to the subtleties of flora and fauna emerging from California’s coastal soil. The forest’s beauty appeared beneath and beyond scenery—birdsong from over forty species; native plants I had never heard of; the scat of an elusive Puma concolor, one of maybe four remaining on the entire peninsula . . .

What to Save? The Normative Dilemmas of Resilience

In the first part of this series of essays on resilience, I discussed the general dynamics that make a social system resilient. I presented resilience as “the degree of disruption a system experiences in response to changing circumstances.” The Oxford dictionary definition is a bit less rigorous, but essentially the same: “the capacity to recover quickly from difficulties; toughness.” Both of these definitions present resilience as an anodyne feature of a general system, and they work fine as a functional way to initiate a conversation about priorities. However, the concept of resilience demands deeper questions about what the concept really means and how we should consider it . . .

It is important to cultivate a respectful and engaging approach to developing and maintaining relationships with indigenous cultures. I propose that two fields of inquiry, bioculturalism and stewardship, be considered together as biocultural stewardship in order to strengthen both. My main premise is that the dominant culture of a country or region bears more responsibility for creating relationships with indigenous cultures because of inherent power differentials, as well as histories of oppression and marginalization . . .

Clay, the main protagonist of the novel Less Than Zero, is a native of a Godless Los Angeles and has been painted by Bret Easton Ellis as an example of the ills of urban excess—young, bored, over-privileged, well-connected, and a social deviant. We must merge at some point, interact with other city inhabitants, and then retire to our urban bunkers for shelter from the madness. It must be acknowledged that Clay is but one possible archetype of an urban citizen. This Clay of Bel Air does not live the same life or possess the same life chances as a young kid living in “white flighted” Echo Park, Los Angeles . . .

According to noted biologist and long-time primatologist Robert Sapolsky, the past two decades have seen a complete revolution in our understanding of human nature. This view is supported by the pioneering work of Jane Goodall and Frans de Waal. Yes, I said “human” nature, not just the nature of other primates. What we have learned is still sinking in, and we know that new knowledge can take decades to be integrated into our highly educated circles, let alone popular human culture . . .

Workers of the World, Relax!

The late, great environmentalist David Brower used to say that there will be no profits, no corporations, no economic growth, and, by implication, no successful economies on a dead planet. Brower, who made the Sierra Club a powerful force for conservation and founded Friends of the Earth, often delivered what he called his sermon. He compressed the age of the earth, some 4.6 billion years, into the Biblical week of creation. When you do this, a day represents about 650 million years, an hour, 27 million, a minute, about 450,000 years, and a second, 7,500 . . .