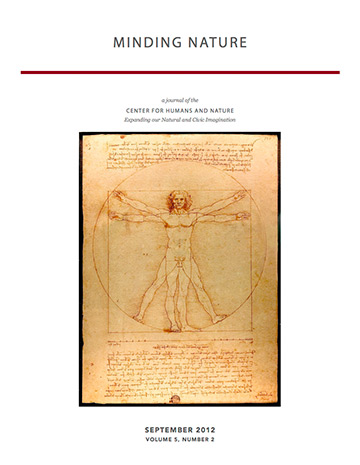 Losing Our Concepts, Reclaiming Ourselves

Let me begin with two propositions, which form a backdrop to the rich and probing articles in this issue of Minding Nature. The first is generally true of the human condition as such; the second has not always been true, but it is true of the situation of humans and nature at the opening of the twenty-first century—urgently true.

What Can Ecology Tell Us About the Nature of Reality?

We are trying to get at big questions in this issue: Who are we? What are our economic activities for? While it may seem strange, these are questions that interest me as an ecologist. In my earliest days doing fieldwork, intently looking out into the woods—from the Australian rainforest to the Icelandic boreal woodlands—I wondered: How does all of this work? What does life mean?

I was lately asked to talk at a meeting of the International Society for Anthrozoology. I didn’t know that there was such a thing, but its existence strikes me as good news. Anthrozoons (or anthrozoa) are presumably humans who are also animals. Since no human has ever been anything but an animal, it seems odd that we should now find it hard to grasp this concept.

What Does It Mean To Be Human? An Evolutionist’s View

The Center for Humans and Nature has identified the question, “What does it mean to be human?” as important for its central mission of understanding the relationship between humans and nature. In the essays that were commissioned to address the question, the authors seemed irresistibly drawn to another question: How can we cope with the enormous problems threatening humans and the natural world, caused largely by the impact of humans on the natural world?

By: Peter A. Victor

Looking back over the twenty-first century, future historians may well see it as even more tumultuous than the century that preceded it. In the twentieth century the human population more than tripled, average life expectancy at birth more than doubled, and real gross domestic product increased nearly forty times.

The relationship between economic growth, human well-being, and the achievement of a sustainable future has a long and complex intellectual history. In his 1910 book The Fight for Conservation, for example, the American conservationist Gifford Pinchot emphasized: “the right of the present generation to use what it needs and all it needs of the natural resources now available [recognizing] equally our obligation so to use what we need that our descendents shall not be deprived of what they need.”