Looking out of the corner window, the sea is cut in half. The sun may be out of sight, but I know that it’s setting—it’s that time of day. Again. With its last gasps of warmth the sunlight slices through the window and saturates the air around me, painting the walls orange, arousing a craving for ripe nectarines. The afternoon rays relay a message from the sun to tell me it's time to get off the internet. Stand up for the first time in however long.

The room I’m in isn’t my own. I came to the coast to visit family just a few days before lockdown, unsure when I might get this chance again, and as the news of the pandemic unfolded its crooked wings I decided that it would be safer to stay put. That was four months ago. Since then I’ve watched the sun crawl further along Arran every evening, bouncing along Goat Fell like the ball over karaoke lyrics waiting for the next line.

From the moment I wake up in the spare room with the sun in my eyes and, despite all my (admittedly half-hearted) efforts, unidentified birdsong in my ears, time pulls and stretches and sags through space until it misshapes itself into utter irrelevance. Every day the ripening sun hauls itself up across the sky, up and up and up, slowing breathlessly to an almost complete stop around 11:30 a.m., when it drags itself up to the zenith, huffing and puffing like the Little Engine That Could before sliding double speed down the other side.

I see a meme on Twitter: “Study finds it’s 4pm most of the time,” and laugh out loud to no one. 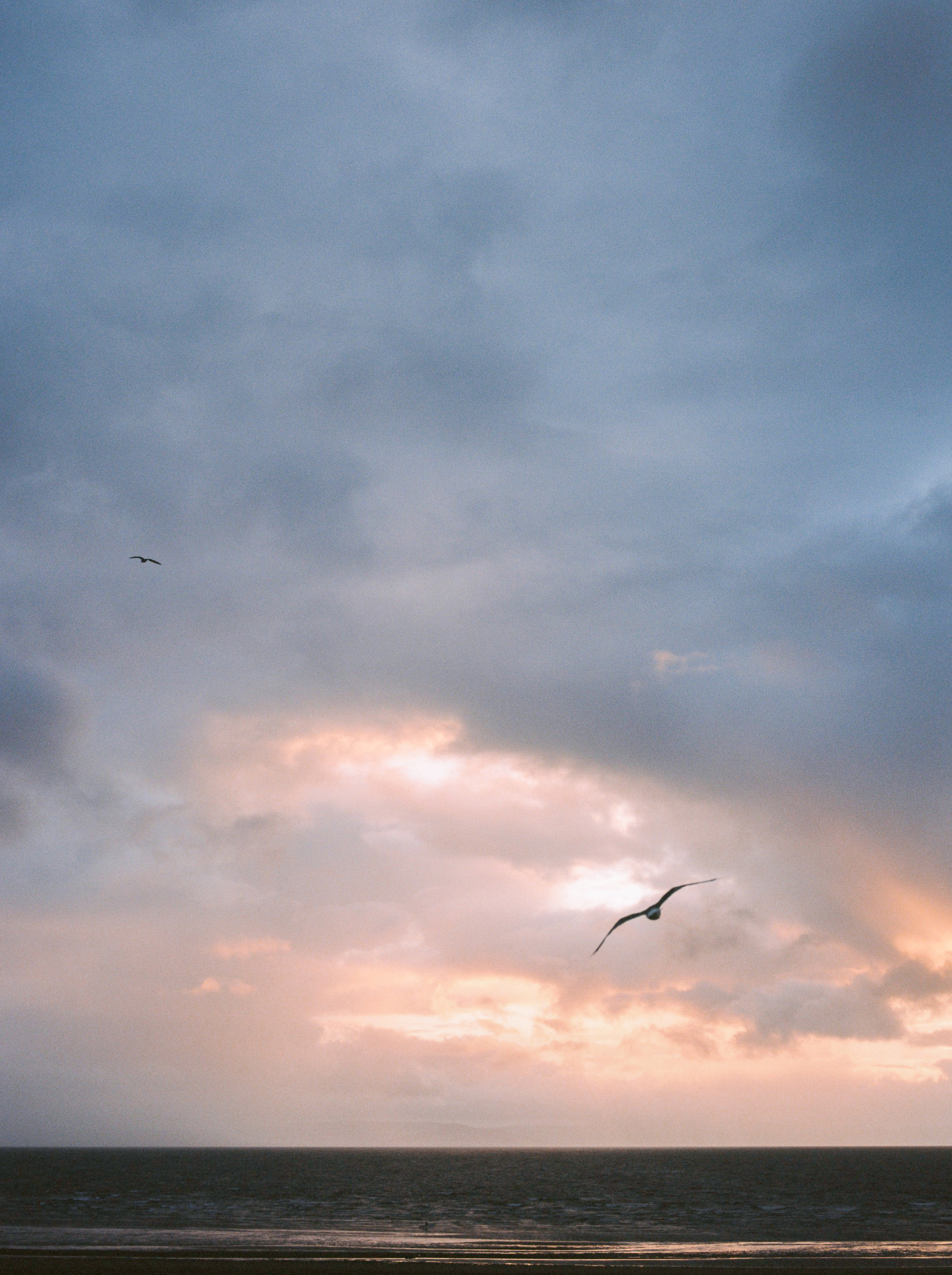 At a time when it’s so natural to feel powerless, there’s a certain energy that pulses though previously static air when accepting the triviality of time—a new superpower sparking at the fingertips. Like when someone told me to relax my muscles when I’m cold, and suddenly I could change the weather. Or to breathe into those muscles when they’re tight, and suddenly I could grow them longer. Of course, I had no real power to control the environment or my body, at least not with a single breath. It was not a controlling of the elements, but a guiding of them. We can’t make the waves stop crashing but, with a firmer grip of the wheel, it’s possible to twist and turn a little smoother, to slow things down. To give obstacles a little more time to be drawn into focus, though not necessarily enough time to steer out of their way completely.

From my temporary “office,” which consists of a side table pushed against a corner window and a worn armchair on which I can choose between leaning too far forward or too far back, I see two seagulls soar past on the other side of the glass. Swimming through golden light, they bathe in a warmth rarely reserved for them. Minute by minute, precious metals melt through the air, silver to yellow to rose. Rose like the bushes that used to grow in front of my gran's house where I’d spend summer holidays, and the first house I’d call home when Scotland became that to me after seven years on the other side of the Atlantic. In front of the pebbledash walls rose bushes bloomed bouquets of fluorescent pink petals big enough to bury my face in, bursting with the colour of the raspberry sauce that was squeezed into my single scoop of vanilla ice cream, spilling out of the top and swirling round and round with every lick. My sister and I would leap over the roses as soon as we heard that ice cream van sing-songing around the corner, rolling up the street, painted white and orange like a Solero on wheels.

I passed by that old house last year and all of the roses were gone; the house’s new occupants tore their roots from the earth in favor of a driveway. I understand that these houses were built before many people had cars. (A vivid memory from my childhood is of a family friend driving up in her little red convertible and taking my sister and me for a ride round the block, one at a time as the number of seats would allow it. I waved out of the window like a celebrity, wondering if anyone might ask for my autograph.) I understand that now, more cars require more space to keep them in. Still, I can’t help lamenting that the cement isn’t very pleasant to stop and smell. 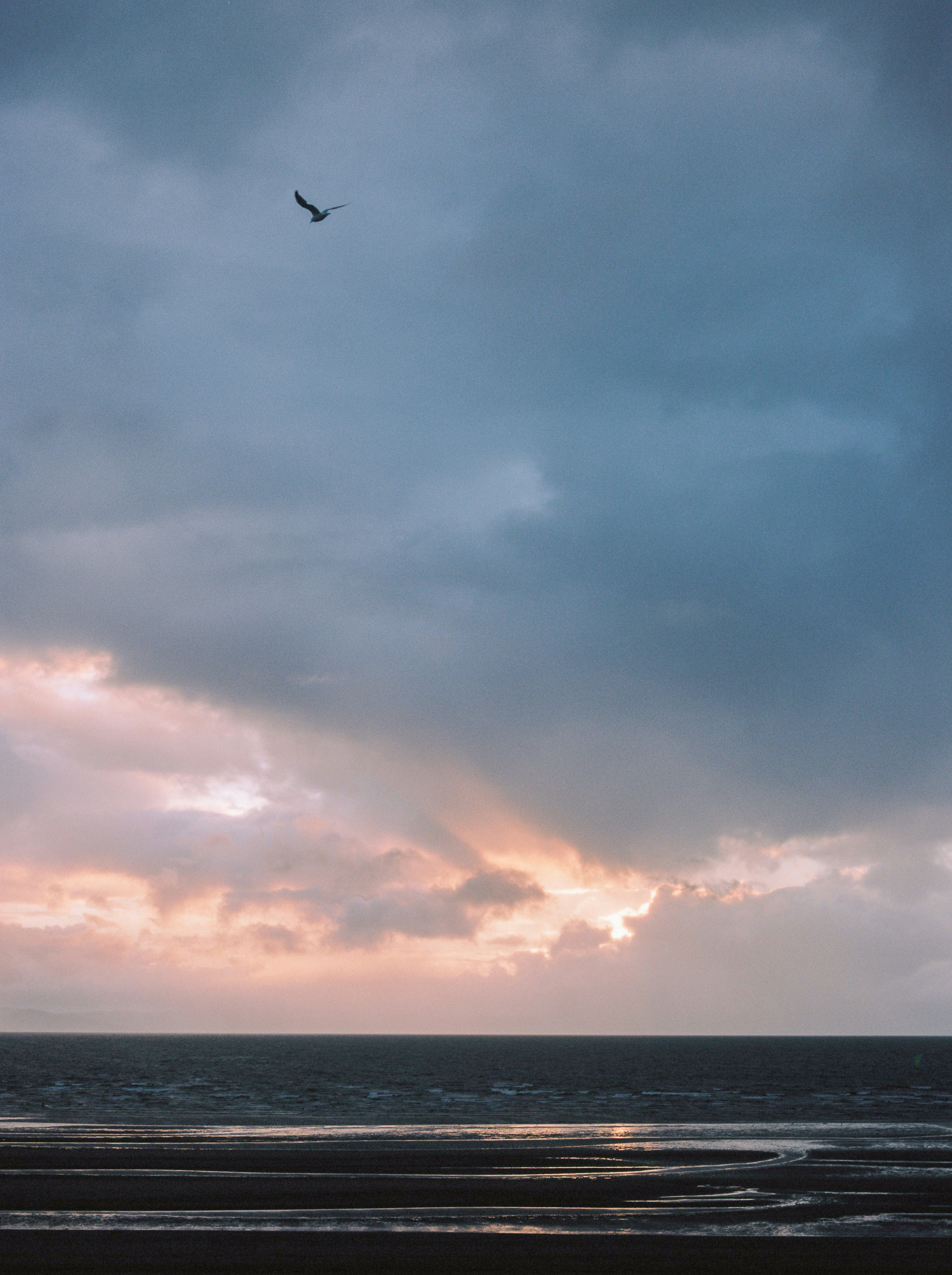 Back by the sea, the water blushes pink where clouds reflect on its surface to rest at the end of another day. Continuing on its roll towards the horizon, the sinking sun stains the sky with that same raspberry sauce, and I can taste it all over again as it slips down over vanilla clouds.

Out there so much of life floats on unchanged, melting from one day into the next, adapting. We all adapt over time, for better or worse; our ability to do so is how we’ve gotten this far as a species, and it’s the only way we can continue. However, the speed at which we adapt is relative—we have to act quickly, and yet the actions we take will unfold slowly, rippling into times we’ll never see. If humans halted our carbon emissions today, it would still take decades for the ocean outside my window to stop warming. This does nothing to overcome our feelings of powerlessness and that’s difficult for us humans; it goes against our desire to see the progress we make. To reap the benefits and the credit, and to confirm that the sacrifices were worth it. We just need to hope that they will be. Looking out of the window, for every powerless day when all we can do to help is to do nothing, there are moments—some more fleeting than others—when it's possible to slow down and sow the seeds for roses we'll never see.

I find some solace in knowing that by staying inside, doing nothing, I have opportunities to literally stop and smell the roses again. Pink and white petals form bowls for bumblebees to roll around in with glee, daily sunsets provide evening entertainment, and fresh sea air soothes my screen-tired head. With each lengthening day as spring becomes summer, a new color emerges from the soil and unfolds its pastel petals; another flutters past with crimson wings. Shells of creatures who have lived full lives beneath the surface wash up, empty, keeping their stories to themselves.

Strange and uncertain as this year may be, the sea, the horizon and the pink sun that sets behind them remain the same. A constant, a comfort, and the best view is from wherever I am, whenever I stop to look.

“Roses” has also appeared in Crested Tit Collective's Rewilding: An Ecopoetic Anthology. Reprinted with permission of the author and publisher.

Christina Riley is an artist based on Scotland's west coast. Using film and alternative process photography, found objects, writing and installations, her work draws acute attention to the details of the natural world with a particular focus on the sea.