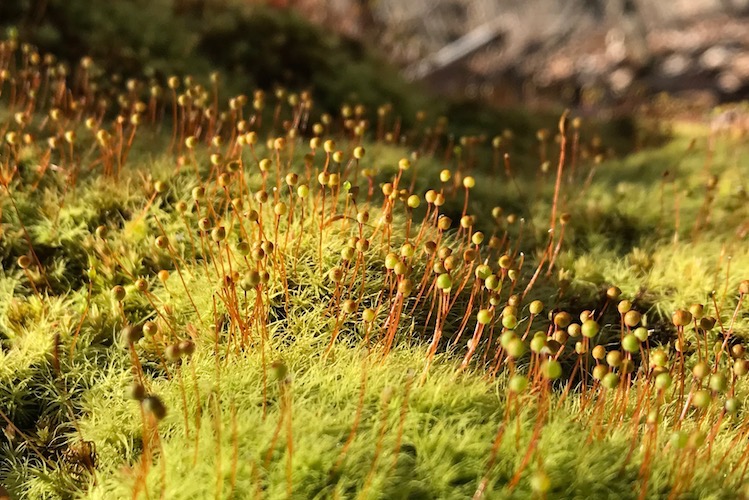 “Some landscapes tower and impose; ours deepens.”

On a quiet late winter morning, I perch on a rocky outcrop in the woods of central North Carolina.

My wife works in academia and every few years we have moved to a new town, leaving behind connections to beloved landscapes and communities.

And so, I find myself a stranger on the land again, clambering around alone on a pile of granite boulders overlooking Reedy Fork Creek, a tributary of the Haw River that snakes around the north side of Greensboro.

Resisting the erosive forces of wind and water, the rocks seem to have risen from the forest.

But I am learning that the Piedmont’s most defining feature is that nature reclaims the land. Even raw stone cannot deny the forces of plant succession, and mosses are some of the first living organisms to colonize a newly exposed rock. 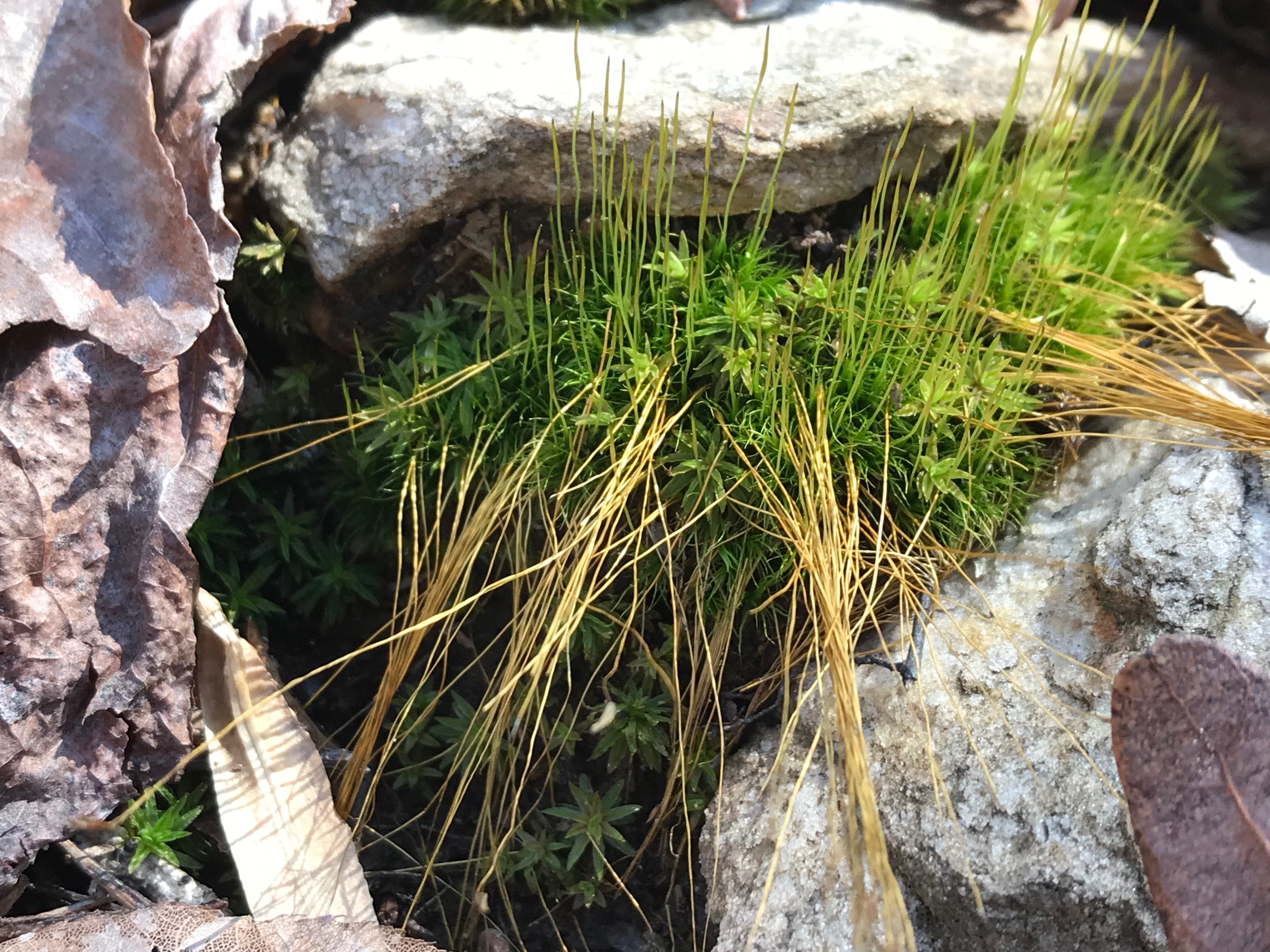 I pull in closer. Last night’s rain clings to the green strands, holding moisture close to the surface of the granite. The mats collect dust and debris, die and decompose, forming hummus. Chemical processes within mosses slowly break the rocks down to sand.

Mosses create an environment conducive to plant life on this granite crag, and seedling trees and ephemeral wildflowers sprout from the mats all around me. If I could zoom in further, I might find other life supported by the mosses—a single clump of moss the size of your fist might contain over a quarter million microscopic animals.

Before moving to North Carolina, I’d never given moss much thought. But after a dry winter trapped in a library carrel, the green called to me. I peered closer into the microbiome clinging to the surfaces of things and found a kinship with these plants. I have tried to emulate their capability to thrive in new environs, and to support a community of living things, all without putting down roots.

I admire the way mosses adapt to change, inhabiting surfaces where water comes and then goes. A moss could lose 98% of its water content, and still survive in a dormant state for decades.

Perhaps there’s also some lesson to be found in moss reproduction. Moss spores can’t germinate within their parents’ smothering, dense mats, so mosses elevate their sporophytes on stalks to blow their offspring away on the wind.

Like me, the mosses are rootless. They have no vascular structure, but rather absorb water through the cell walls of their leaves, and wick moisture throughout their mats by using the water’s own surface tension properties to soak their filamentous shapes. 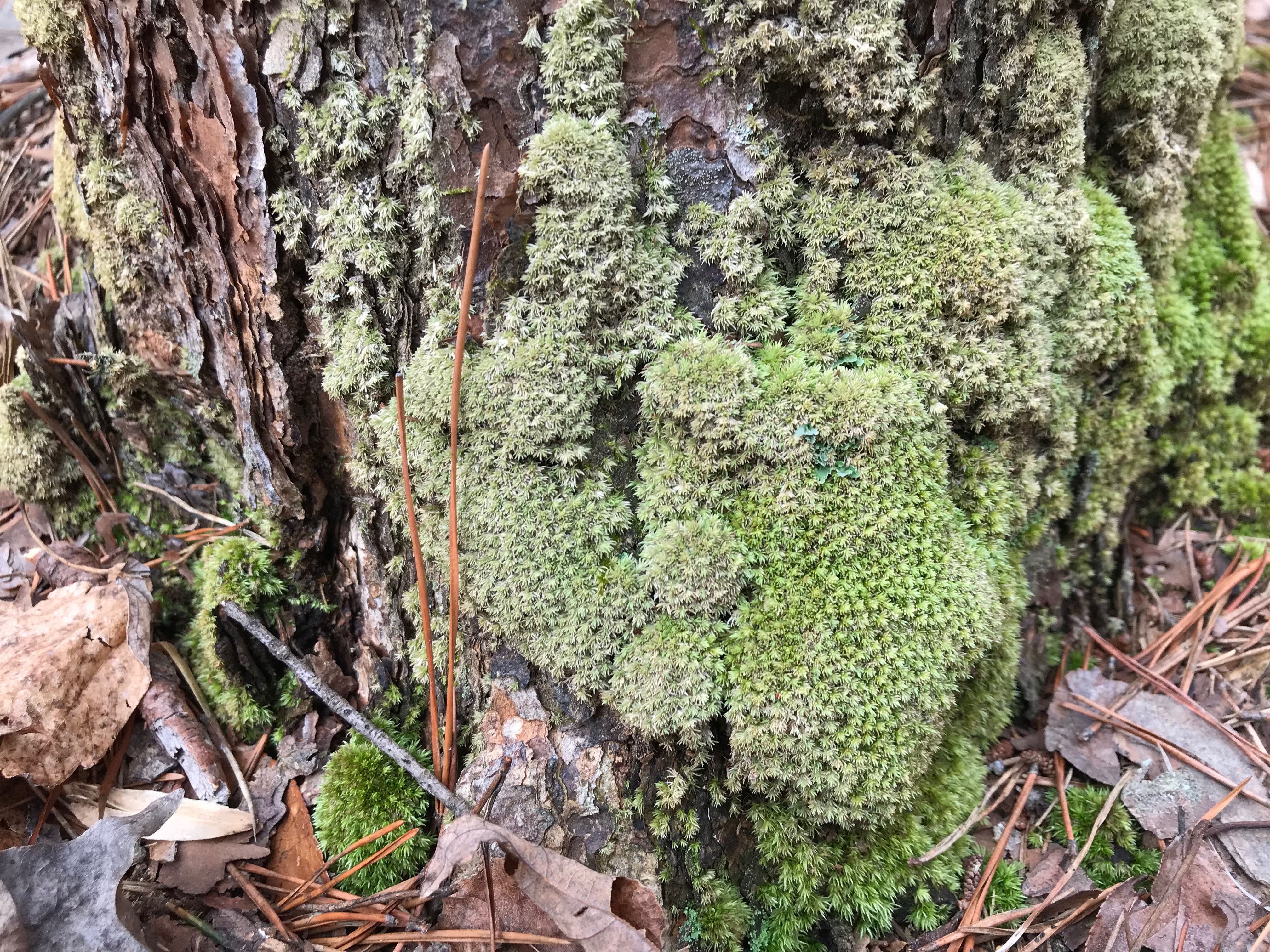 Every place I’ve lived, I’ve found that learning the specific names of the members in a natural community is the critical path for building a relationship with a place.

“For magic consists in this, the true naming of a thing,” wrote Ursula K. LeGuin in A Wizard of Earthsea. “Many a mage of great power has spent his life to find the name of one single thing.”

Indeed. Identifying moss species feels a little like that, like you could spend your life learning one single thing. The terminology, the forms, the scale of it—all of it is arcane, miniscule, foreign, an earthy magic.

I had read Robin Wall Kimmerer’s Gathering Moss, and so knew the task of getting to know these diminutive plants would be worth doing.

“Just at the limits of ordinary perception lies another level in the hierarchy of beauty, of leaves as tiny and perfectly ordered as a snowflake, of unseen lives complex and beautiful,” writes Kimmerer. “All it takes is attention and knowing where to look. I’ve found mosses to be a vehicle for intimacy with the landscape, like a secret knowledge of the forest.”

I desperately wanted to know that secret knowledge. And so I bought a loupe and wore it around my neck like a talisman.

Every bryologist tells you to buy a magnifying hand lens, 10x minimum. What they do not tell you is that you will spend hours peering at a faerie world through a portal the circumference of a dime. It’s painful, tedious, and alien. But incredibly beautiful and surreal. Scanning moss leaves for microscopic details feels like falling into a kaleidoscope. 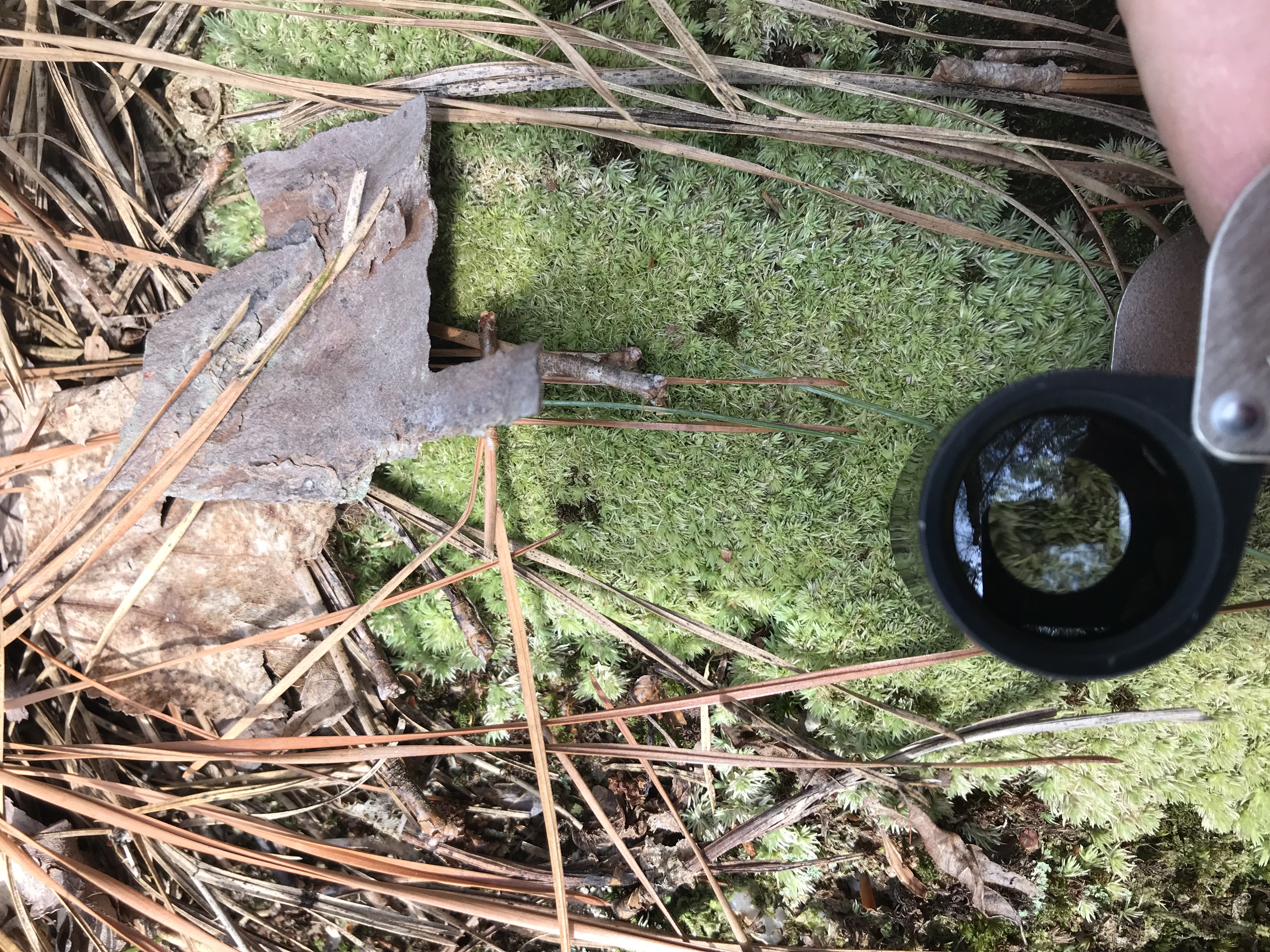 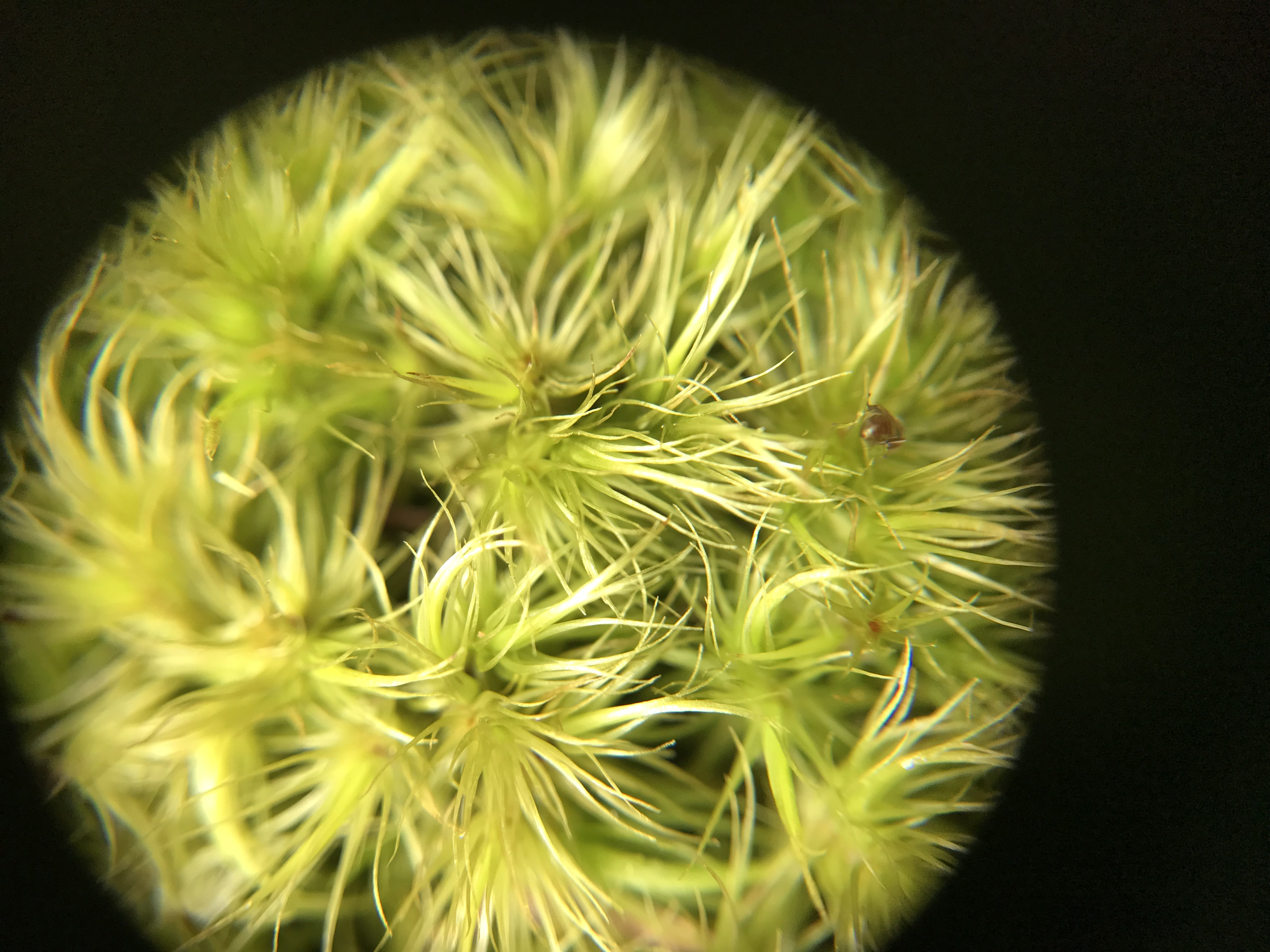 Here on this jumble of rocks there could be a dozen or two dozen different kinds of moss. The tufts and strands climb all over each other. My field guide suggests looking for homogenous samples and avoiding clusters of intertwined species.

I isolate one type of moss with wispy fine hairs, bright green, as if glowing. I look closer and see it is sprouting lollipops—bulbous round capsules that look like pimento-stuffed green olives. Bobbling my field guide in one hand and my magnifier in the other, I guess that it is an apple moss, Bartramia pomiformis.

I notice a puffball-shaped thing a few yards away, growing on exposed dirt, and upon examination, determine it is a pincushion moss, Leucobryum glaucum, described as resembling a “white-green sea urchin” in my field guide, Mosses of the Northeast and Appalachians.

The guide explains how to identify morphological features of moss I had never heard of or considered. A moss may be acrocarp—formed of simple or sparsely forked plants in a tuft of carpet. Or it could be pleurocarp, branching like a miniature fern or tree. The leaves—typically too small to examine with the naked eye, take various shapes, such as ovals, tongues, lances, and hairs. Some of the leaves are fringed with teeth, some feature a midrib.

According to the guide, pincushion moss is the only lance-leaved acrocarp moss without a midrib in my biome. Determining this required a lot of specificity and squinting.

The pincushion moss provided me with a Kimmerer moment. “Having words for these forms make the differences so much more obvious. With words at your disposal, you can see more clearly. Finding the words is another step in learning to see,” she writes. “The neural pathways have to be trained by experience to process what is being seen. The synapses fire and the stars come out. The unseen is suddenly plain.”

Naming the structures and types of mosses might seem trivial. But to label and recognize these forms is to cast a spell on ourselves. To know these words is to summon forth, to bring something to the forefront of our senses. 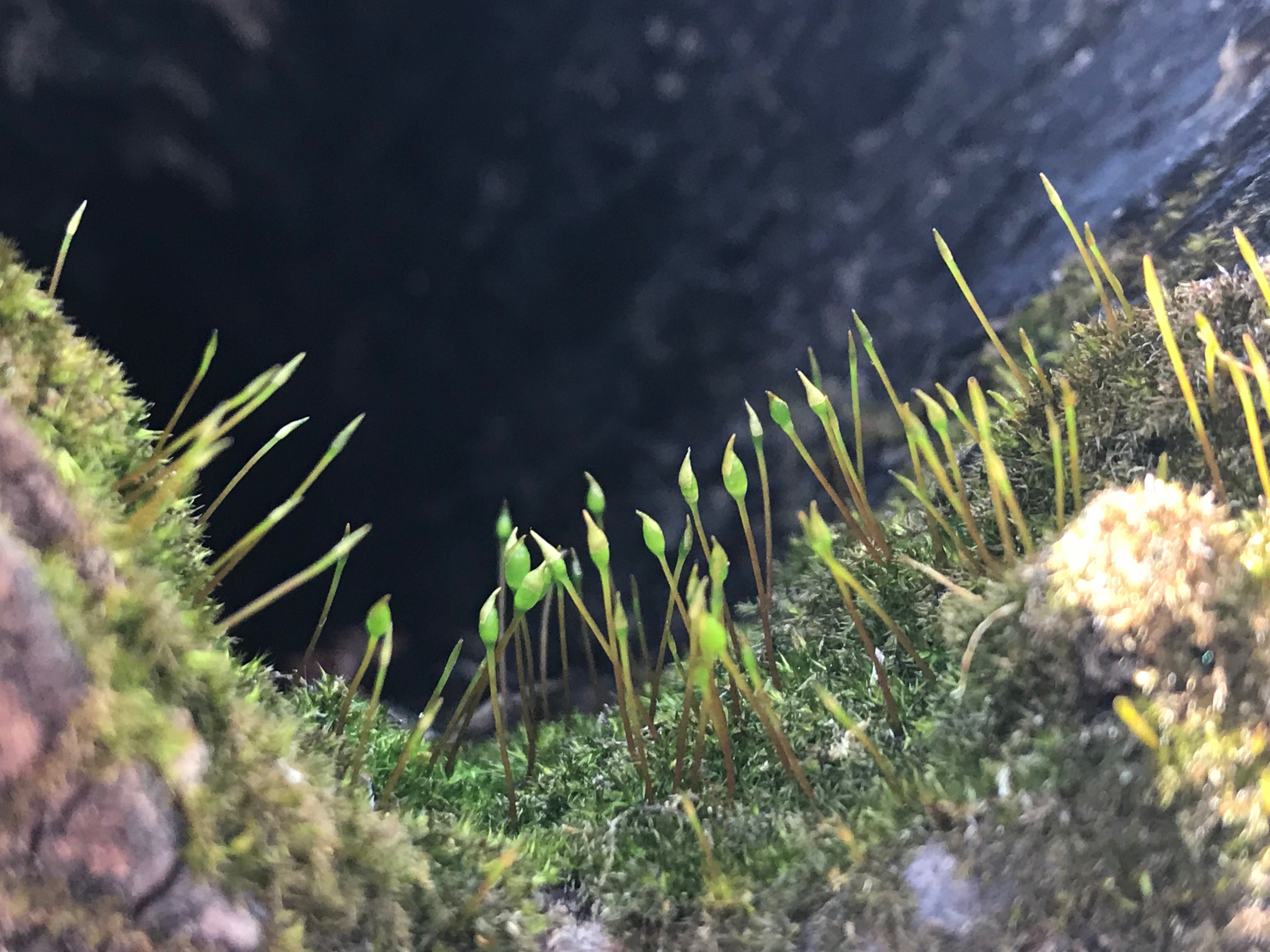 I have started to see mosses everywhere. On a recent business trip to downtown Charlotte, I stopped in the courtyard of the hotel where my meetings were held to admire the mosses growing between the cracks in the brick, the species growing on the trunks of the trees. In hardscaped urban environments, mosses (rootless and adapted to highly variable moisture levels) are some of the only wild plants that can thrive.

My colleagues stared as I got down on my hands and knees in front of the hotel to run my finger over a tuft of furry green moss sprouting at the base of a lamppost. But I had seen someone I knew and had to say hello. As Kimmerer writes, “the way you spot your child’s smile in a sea of faces, intimate connection allows recognition in an all-too-often anonymous world.”

Being a stranger in a landscape is disorienting and lonely. In each place I’ve lived, I’ve left behind what I had built of my identity, or, if you like, soul.

You can build it again, but you arrive empty.

Getting to know moss connects me, starts to bring me home.

Matt Stansberry is a recent transplant to the Piedmont of North Carolina, living in the city of Burlington. He previously studied the wildlife of Cleveland, Ohio. His book, Rust Belt Arcana: Tarot and Natural History in the Exurban Wilds, examining the flora and fauna of the industrial Midwest, is available from Belt Publishing. Find him on Twitter @LakeErieFlyFish.