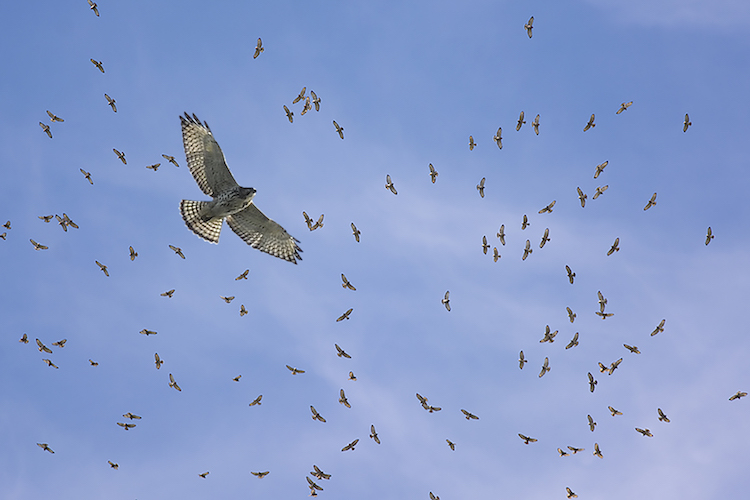 Gabrielle Herin always loved animals and nature. At the age of fourteen, she came knocking at the door of the Detroit River International Wildlife Refuge looking for volunteer opportunities. She quickly became involved in invasive species removal, tree planting, trail maintenance, Hawkfest, Pointe Mouillee Waterfowl Festival, and bald eagle tours. Her love of the outdoors and passion for conservation were heightened by her citizen science and stewardship experiences at the refuge. Over a five-year period, she volunteered over four-hundred-fifty hours at the refuge, where she came to see how she is part of an ecosystem that requires stewardship by everyone. Gabrielle’s volunteer efforts helped her earn a Congressional Gold Medal that recognizes young Americans for exceptional initiative, achievement, and service. 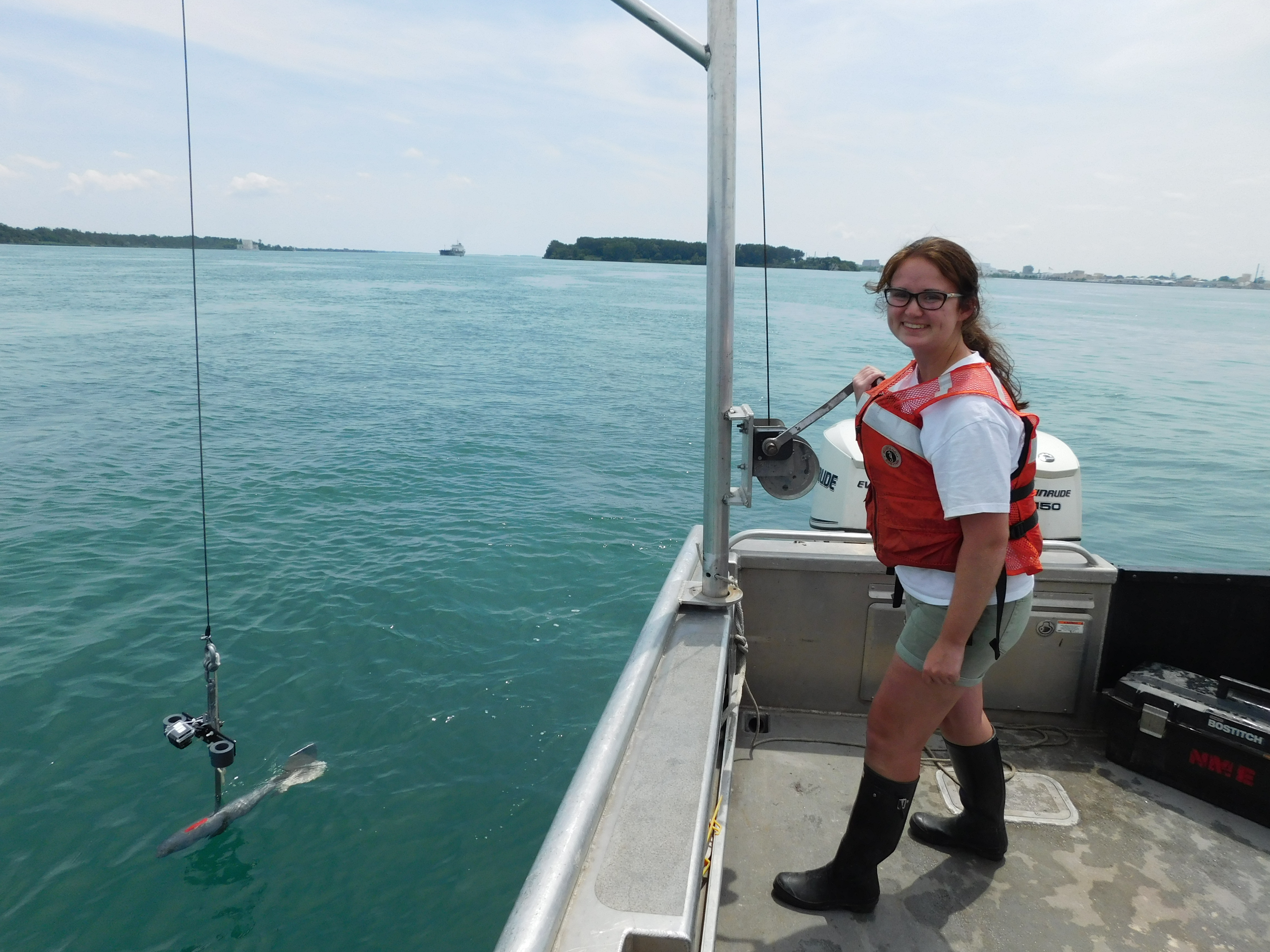 Citizen science is public involvement in environmental monitoring and scientific research to help improve civic understanding of both science and the scientific method, further ecosystem-based management, and develop a stewardship ethic. The goal should be to make citizen science so compelling that it leads to a transformative moment that inspires individual respect, love, and stewardship of ecosystems.

Metropolitan Detroit is probably best known as the automobile capital of the United States and one of the rustier parts of the Rust Belt. During the 1960s, the river that bears its name—the Detroit River—was one of the most polluted rivers in North America. There were no bald eagles, peregrine falcons, or osprey reproducing in the Detroit River watershed; beavers were trapped out; common terns were extirpated from the 980-acre island park called Belle Isle; no lake sturgeon or lake whitefish were reproducing in the river; and walleye were considered to be in a crisis state by the Great Lakes Fishery Commission. Today, in response to cleanup of the river, bald eagles, peregrine falcons, osprey, lake sturgeon, and lake whitefish are reproducing again, beavers are back, common terns have returned to Belle Isle, and the Detroit River is now considered part of the “Walleye Capital of the World.” 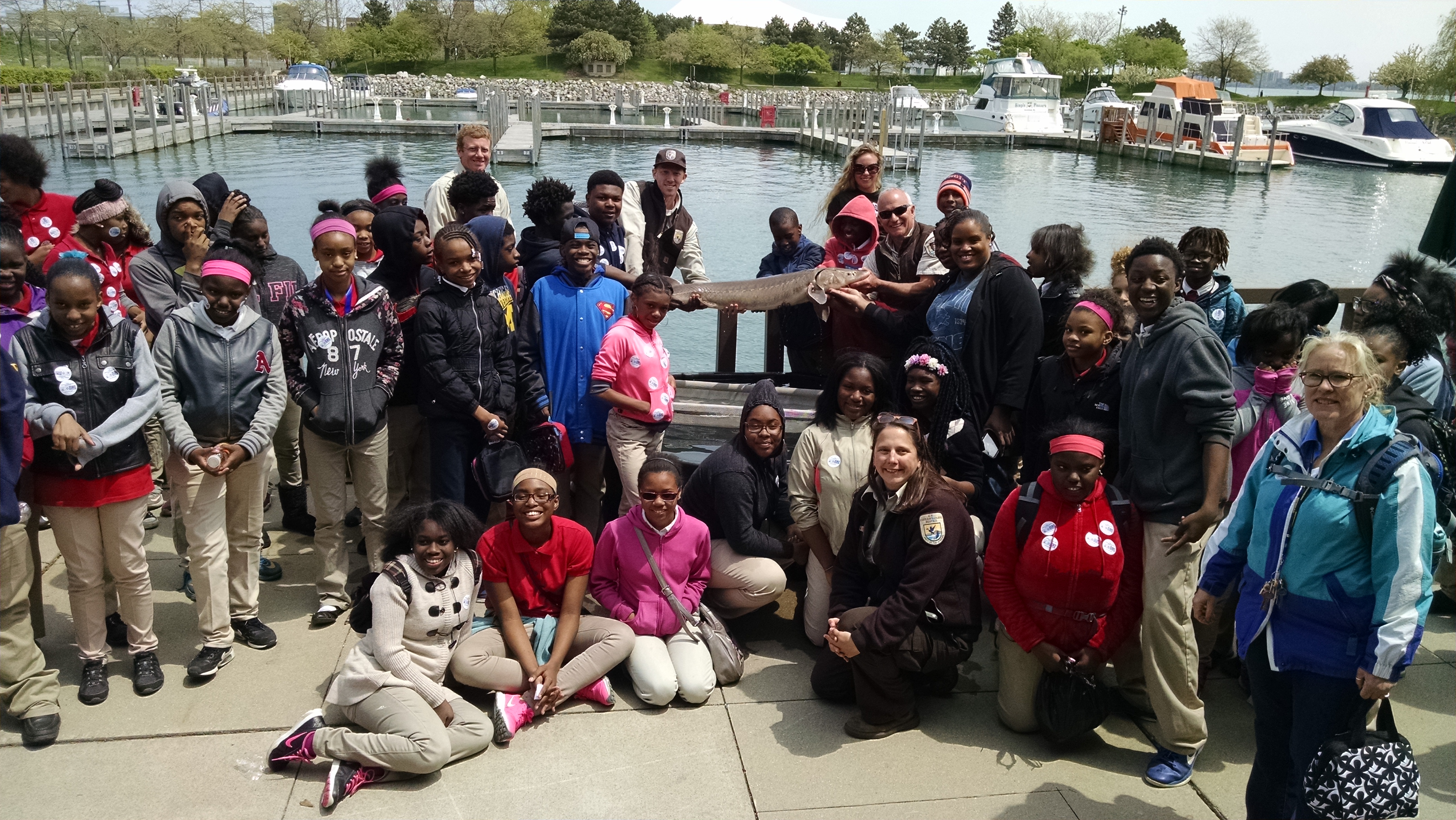 Coupled with this revival and efforts to connect people with nature are enhanced efforts to involve people in citizen science, whether this involves performing angler surveys, identifying aquatic invertebrates collected from river and lake sediments, counting birds, listening for frogs, spotting salamanders, collecting butterflies or dragonflies, or measuring water quality. And this need is increasing because environmental and natural resource management agencies do not have the resources to collect and analyze data to adequately inform management decision-making. Selected examples of compelling citizen science are presented below. 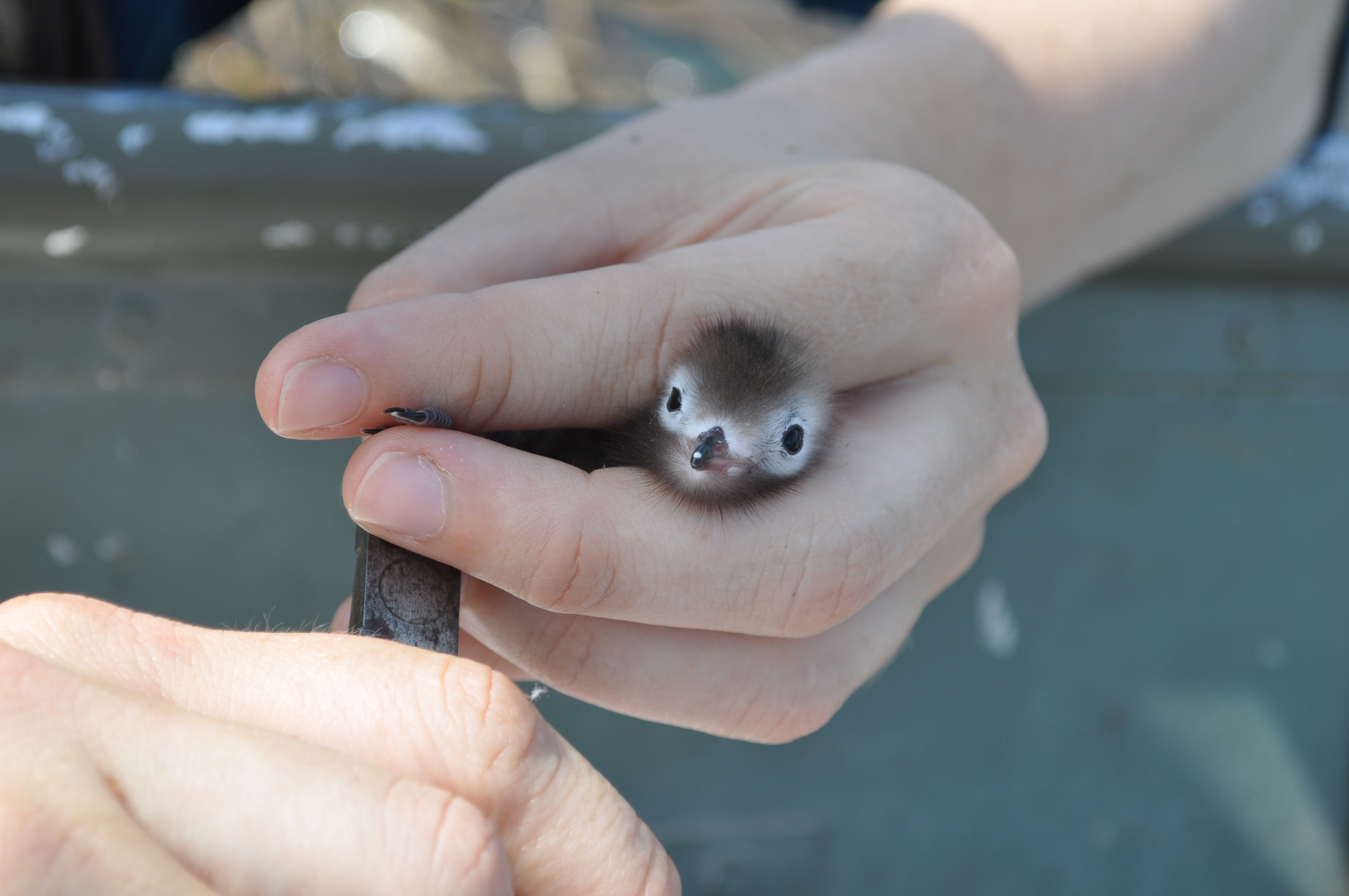 The Detroit River has experienced a 96% decline in Common Terns over the last fifty years.  As part of restoration efforts, common tern nesting habitat was created on Belle Isle in 2008 and 2010. Detroit Zoo and U.S. Fish and Wildlife Service have worked with student volunteers from Detroit public schools to both create nesting habitat and monitor its effectiveness. In 2016, twenty-four active nests were documented at this Belle Isle habitat.

In the Detroit River International Wildlife Refuge, biologists from the U.S. Fish and Wildlife Service and the Michigan Natural Features Inventory work with volunteers to monitor marsh birds in newly restored wetlands on two units of the refuge. Citizen scientists play recordings of marsh birds and then listen for a response, increasing the chances of detecting a focal species. Marsh bird data are systematically collected by following the Standardized North American Marsh Bird Monitoring Protocols and entered into the refuge’s geographical information system for management. 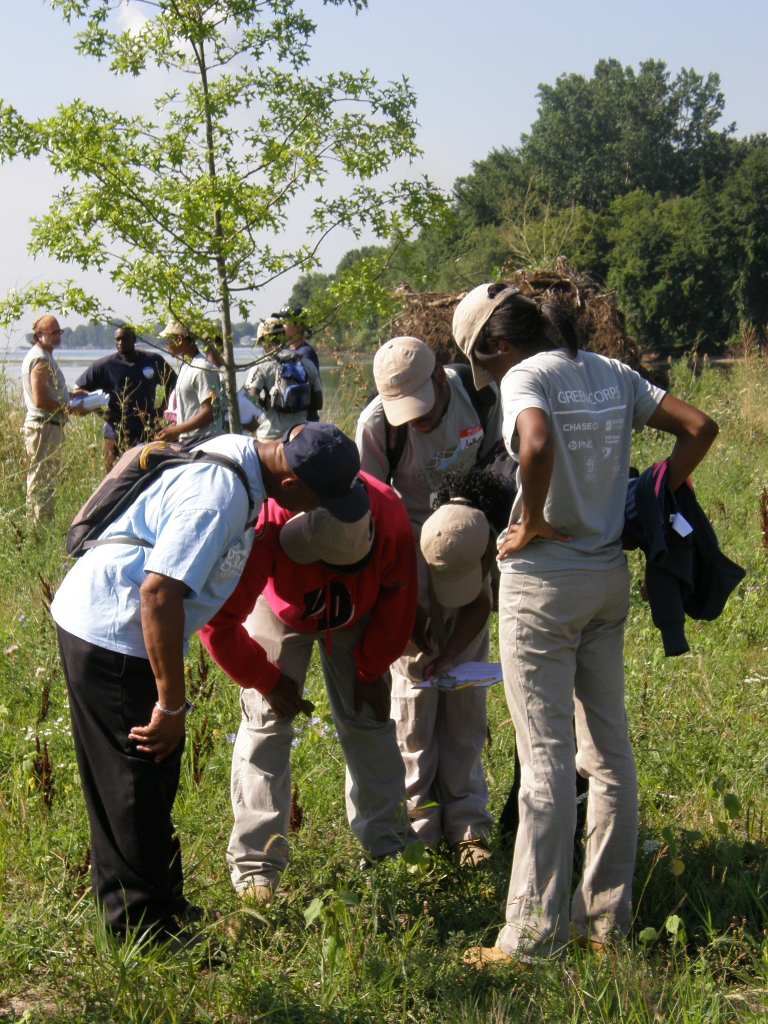 Restoration of the Refuge Gateway

The Refuge Gateway in Trenton, Michigan, is a former industrial brownfield that has been cleaned up and restored as the gateway to the Detroit River International Wildlife Refuge.  Refuge staff have worked with Greening of Detroit and volunteers to plant over three-hundred trees as well as live stakes, as well as perform plant surveys and evaluate the success of restoration efforts.

The Alpena Fish and Wildlife Conservation Office of the U.S. Fish and Wildlife Service performs science in support of native species restoration, aquatic habitat rehabilitation, and early detection and response to aquatic invasive species. Fishery biologists regularly provide opportunities for citizens to be involved in their research and monitoring, including assessing lake sturgeons’ population status and trends in response to the installation of spawning reefs. 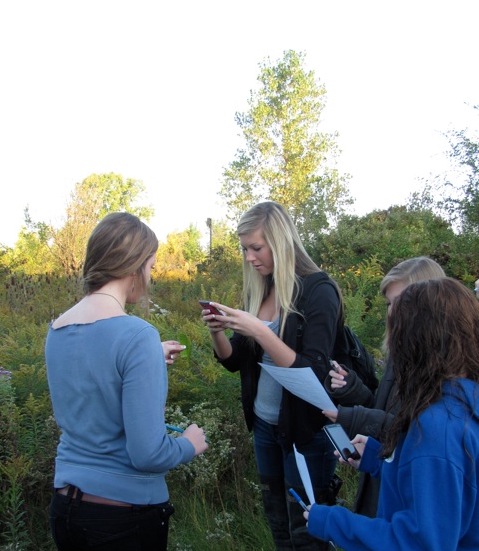 The Southgate Community School District has teamed up with the City of Southgate to develop a once “scary field” adjacent to their high school into a nature area for conservation and outdoor recreation. Students participate in both wetland and upland monitoring that informs their stewardship of the nature area. 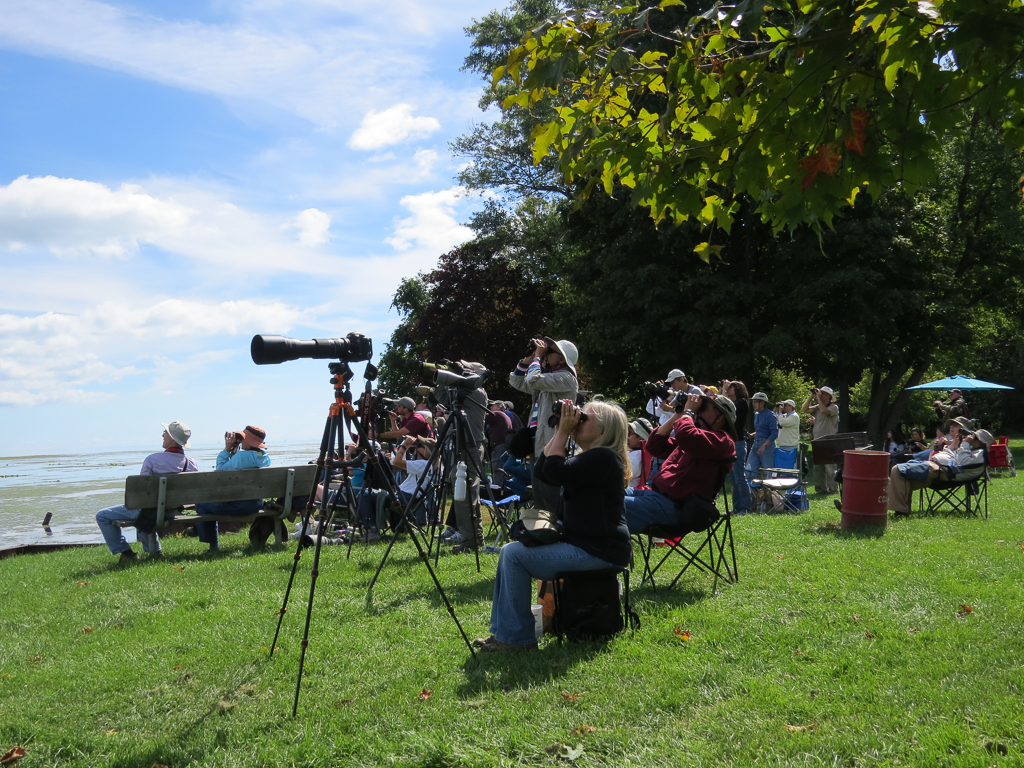 Each fall it is amazing to watch hundreds of thousands of raptors migrate across the lower Detroit River from their eastern Canadian breeding grounds and head south to their wintering grounds, some as far away as South America. This predictable hawk migration provides the Detroit River International Wildlife Refuge with a unique opportunity to involve birders in the systematic collection of annual raptor migration data. A paid counter is employed to work with volunteer counters to collect the data. The refuge oversees the Detroit River Hawk Watch monitoring effort, including quality assurance/quality control and report preparation. A Detroit River Hawk Watch Advisory Committee provides citizen advice. Such hawk watch data are invaluable in tracking raptor migrations and providing an early warning signal for changes in trends. Further, these data are also entered into the Hawk Migration Association of North America database to help understand raptor population status and trends on a continental scale. To give you a feel of the magnitude of hawk migrations through the lower Detroit River, dedicated volunteers recorded an astounding 190,121 broad-winged hawks on September 17, 2011, at Lake Erie Metropark, representing the third highest single-day total recorded at this site. 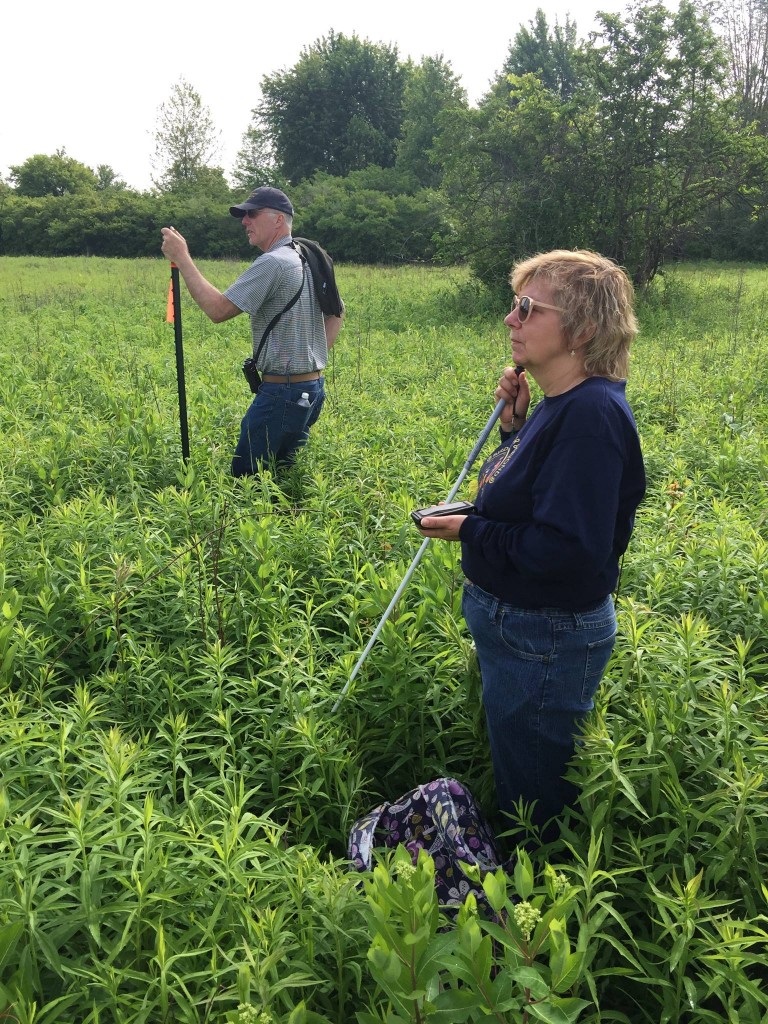 Detroit Audubon was established in 1939 and has over 6,000 volunteers. These experienced, volunteer birders do surveys once per week for 45-60 minutes (early mornings) for four weeks in the month of June, providing baseline data that help in the evaluation of landscape management program success. Participants walk transects through grassland habitat and record bird observations (sightings, songs, fly-overs) at set stops along the transect.

The Detroit River Christmas Bird Countwas established in 1978 as a U.S.-Canada endeavor to count overwintering birds. Volunteers spend the day—from before sunrise (for owls) to sunset—counting both species and numbers of each species as part of a network throughout North America. This count circle is fifteen miles in diameter.

Detroit Audubon works with the Cornell Lab of Ornithology, National Audubon, and volunteers to identify species and estimate species abundance at bird feeders. Detroit Audubon has also created partnerships with school groups in the area to provide bird feeders and seed (donated by Wild Birds Unlimited) so that classrooms can participate in data collection.

Like Project Feeder Watch, Detroit Audubon has been promoting the Great Backyard Bird Count with Cornell Lab of Ornithology and the National Audubon Society, encouraging people to go birding in their backyards for as little as fifteen minutes on one or more days of the four-day event in February and report their sightings online.

Detroit Audubon sponsors field trips where bird sightings are entered into an international database managed by the Cornell Lab of Ornithology.

Detroit Audubon has worked with Greening of Detroit to create and conduct bird surveys in this park to monitor native grassland habitat. 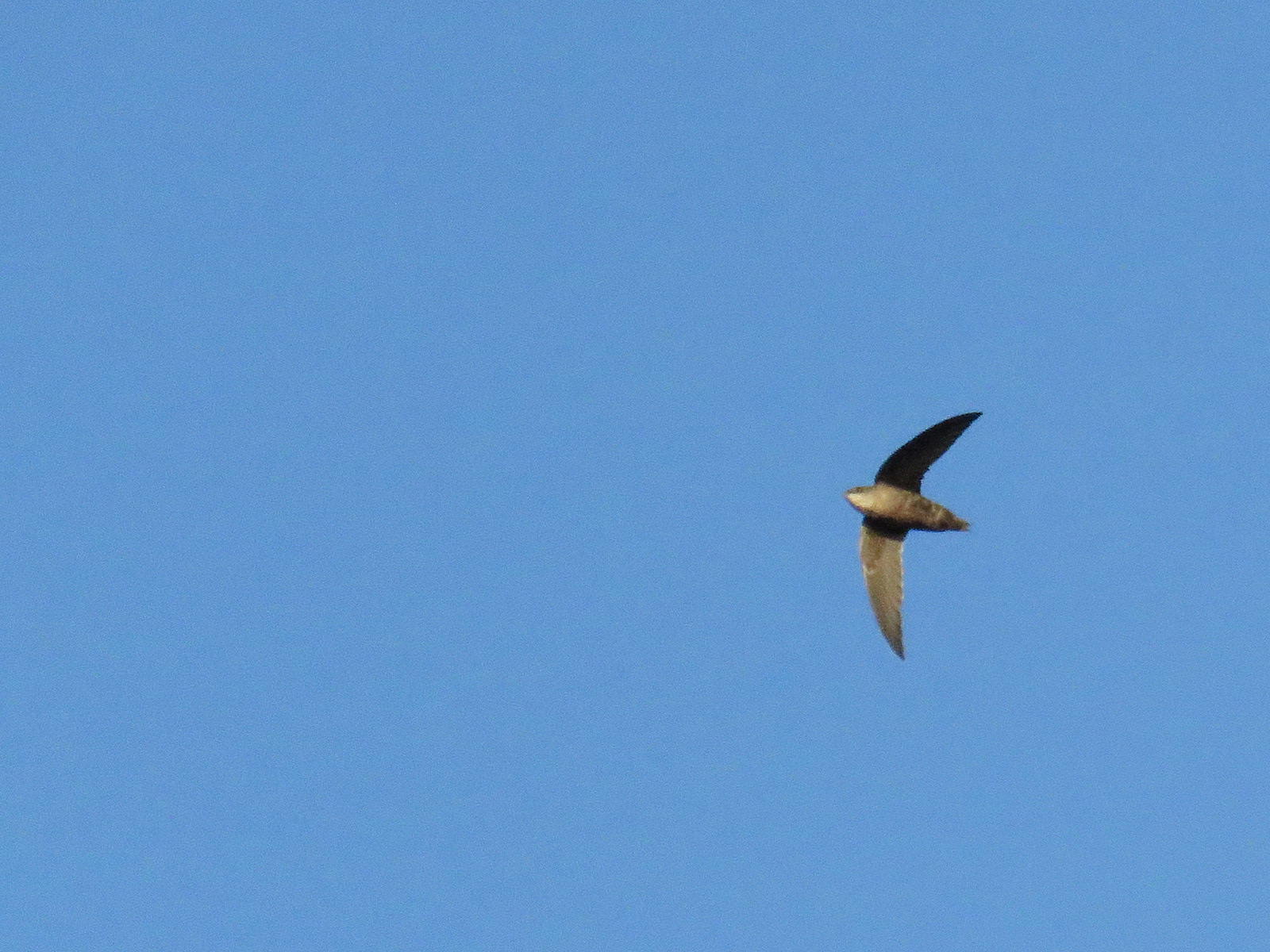 This important citizen science work is now being expanded through the newly established Metro Detroit Nature Network. This network is a coalition of conservation partners working to ensure that all people in metropolitan Detroit have access to and actively steward nature. Citizen science—along with green placemaking, stewardship, green infrastructure, environmental education, outdoor recreation, and youth engagement and employment—are priorities.

Gabrielle Herin’s experience with citizen science, stewardship, and environmental education kindled her passion and led her to seek out other opportunities in the conservation field. When Gabrielle was a 17-year-old high school student, she was selected by the Michigan Department of Natural Resources from a pool of ninety applicants to serve on the Natural Resources Commission’s Youth Conservation Council to provide advice on how to get more youth involved in conservation and outdoor recreation. Following high school, she enrolled in Kalamazoo College where she majored in biology and economics with an environmental studies concentration. During her college summers, she served as a congressional intern for John Dingell, an intern working on renewable energy for DTE Energy, an intern for Michigan Department of Environmental Quality’s Office of Environmental Assistance, and an intern working on fishery monitoring that included citizen science for the Alpena Fish and Wildlife Conservation Office of the U.S. Fish and Wildlife Service. 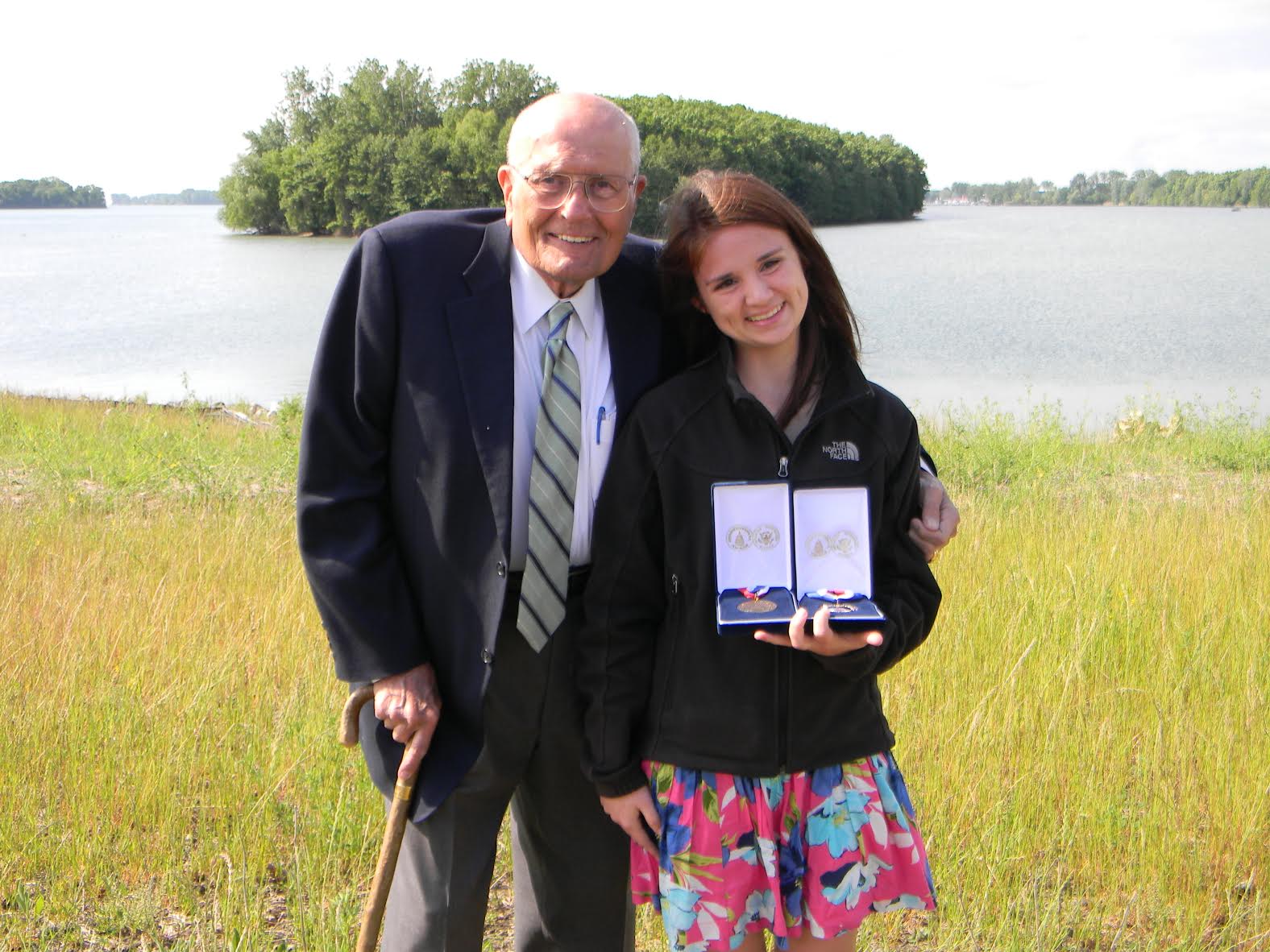 “The hours volunteering in the refuge clearly made me realize that I wanted to work in the field of science in the future,” Herin noted. This year she is working at a nonprofit in Detroit called Focus: HOPE. Her goals are to pursue a graduate degree in urban planning and to work for a state or federal agency in a position that addresses the impact of land use on the natural environment.

As Herin’s experience suggests, citizen science can be an essential component in improving scientific literacy and developing a stewardship ethic. Other benefits of citizen science include: developing a personal connection to the places citizens work and study; gaining an understanding of environmental and natural resource problems, challenges, and needs; learning about scientific methods and how science contributes to management; becoming involved in environmental and natural resource management decisions; and building the capacity of governments, nongovernmental organizations, and other stakeholder groups to fulfill their environmental and natural resource missions. Achieving these benefits will require effective citizen science project planning and implementation that produces measurable results, expands knowledge, provides meaningful experiences for volunteers, and ensures that volunteers have fun.

Clearly, the need for and interest in citizen science is growing. Our challenge is to make citizen science so compelling that people learn to see themselves as part of an ecosystem and not separate from it, and that this experience becomes a transformative moment that inspires individual respect, love, and stewardship of ecosystems. Today, 80% of all Americans and Canadians live in urban areas. Most urban residents are still disconnected from the natural world. We need a “citizen science spring” that reconnects people with nature and does it in an inspirational fashion that creates a civic stewardship ethic. As Aldo Leopold observed, “When we see land [an ecosystem] as a community to which we belong, we may begin to use it with love and respect.”

Dr. John Hartig is currently the Science-Policy Advisor for the International Association for Great Lakes Research. For the previous fourteen years, he served as Refuge Manager for the Detroit River International Wildlife Refuge. John’s most recent book is the award-winning Bringing Conservation to Cities.