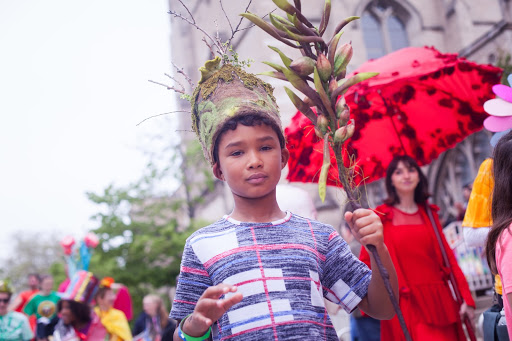 The Persephone Project uses the tools of the theater to create spectacular events that support community, environmental justice, and climate change activism. Through participatory pageants using story, song, drums, dance, costume, choreography, and beauty, the Persephone Project weaves together mythic tales and true stories of conservation. We invite people of all ages to create these ceremonies of place, and join in chorus with nature to address the environmental issues of today.

How to Work with the Persephone Project

Pageant Workshops: How to Participate 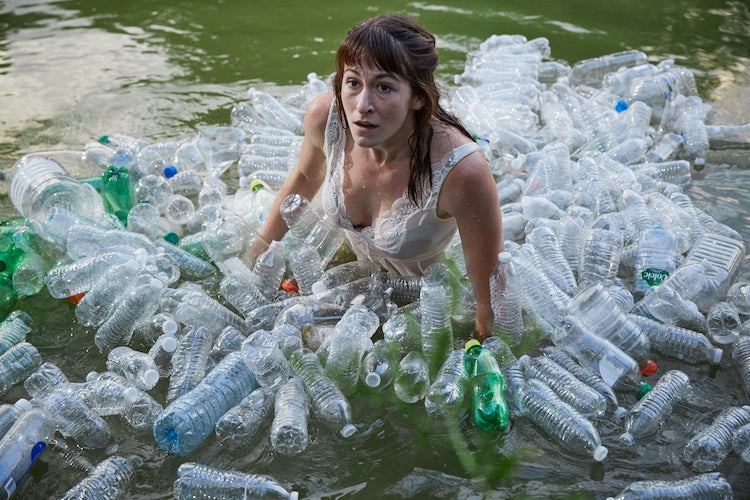 The Ancient Greek myth of Persephone tells this story: a harvest goddess’s daughter is stolen from her mother and taken to the Underworld. The whole world and its seasons are upended as a result. The mother demands justice. Her demand is ignored. She withholds the Spring and with it the harvest. The Earth and its creatures suffer and cry out for justice. At last, a compromise is reached, and the daughter is able to return to her mother for six months of the year. Everything blooms and grows. At the end of six months, Persephone must return to the Underworld, and as a result everything dies and there is winter on earth. Thus begins the cycle of the seasons.

The Persephone myth is a powerful allegory for nature in crisis: resources (the daughter) are taken from the Earth (the mother) without regard for the consequences. It is a timeless story of love, anger, grieving, and compromise. And because a Persephone Pageant is a performance that makes use of story, landscape, and myth as a frame for personal experience, the audience often finds themselves empathizing with the characters of Lakes or Rivers, and seeing the plight of the landscape in more human terms. This personification of nature is a powerful tool for transformative action. 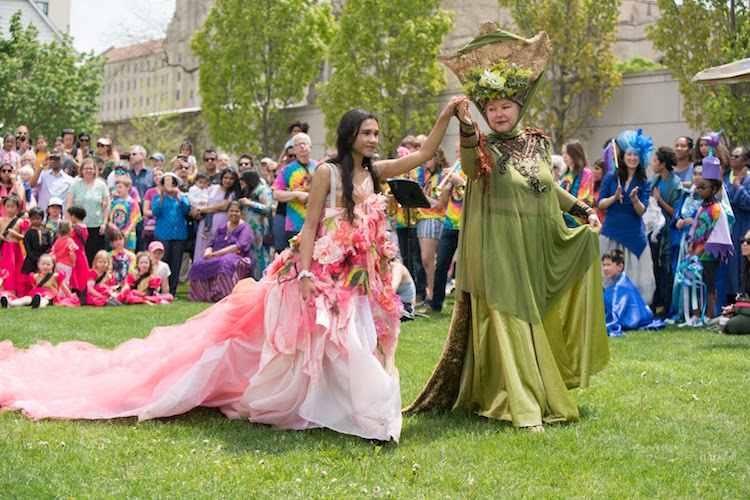 What is a Pageant?

We define a "pageant" as a live, moving picture story, often performed outdoors, with the landscape, weather, and sky playing equal roles alongside professional and non-professional performers. Live music and large but simple visual gestures (flags, large puppets, group dance, and choral song) are used as storytelling elements. The themes of a pageant are often tied to the location in which it is performed, with participants and performers intimately connected to the subject matter. Thus, a pageant is a kind of ritual performance a community enacts for itself. All of our pageants are followed by celebration, the sharing of food, and conversations about the issues illuminated by the performance.

In order to build communities’ capacity to respond to the climate crisis, it is important for them to vividly imagine justice and deeply imagine a relationship with the land. As the environmental activist Joanna Macy says, “We have treated the earth as a supply house and a sewer.” The Pageants that the Persephone Project creates help us fight for the places we love. They support compassionate activism—calling attention to unjust environmental and social issues and amplifying the needs of nature through the power of metaphor. 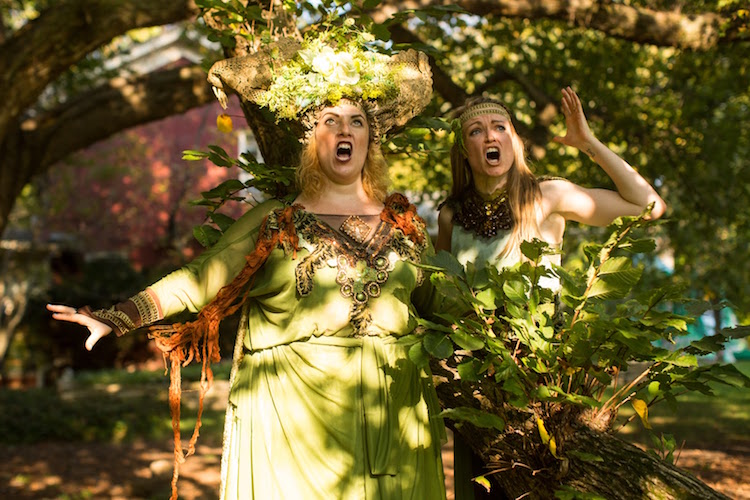 Sign up to receive important Persephone Project updates and invitations. 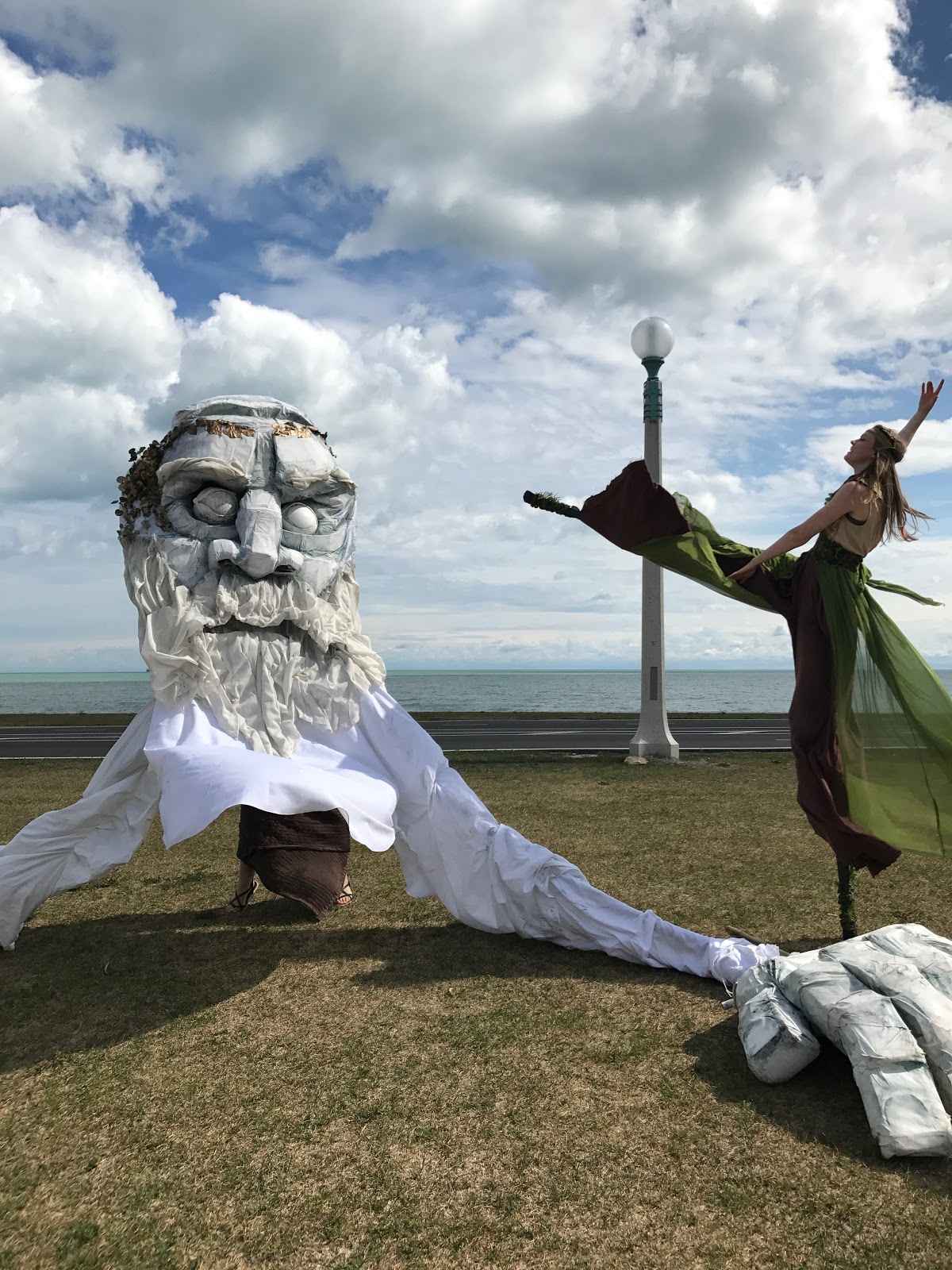 The Persephone project in the News 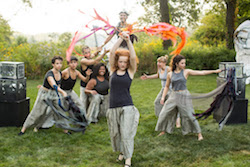 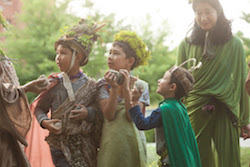 “I’m a theatre maker who has been making site specific and participatory performance for 30 years. I'm also the parent of a seven-year-old daughter. These two aspects of my identity collided, beautifully and productively, when I was invited to participate, with my daughter and wife, in the Persephone Project. The project is a gorgeous amalgamation of artmaking, public spectacle, and educational opportunity. Our family was able to engage in meaningful conversations about conservation as a result of the joyful experience we shared. The Persephone Project has crafted a process for powerful art that is truly participatory and transformative.” 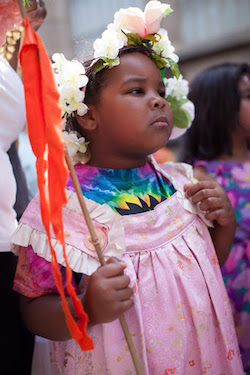 "Our daughter is 10 years old and loves to dance, play music, perform, and draw. There's no better way to teach her about conservation and the environmental challenges faced by some communities than through the creative media she loves—all of which help her see the world in a new way. The Persephone Project is an ideal way to have and share this experience." 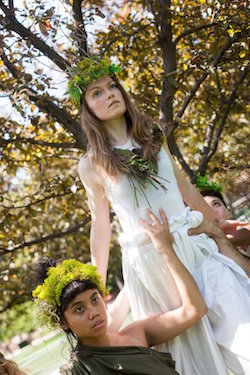 “The Persephone Project is a beautiful combination of circus, science, and myth, created in a way that is responsive to its setting. The audience was swept up in the visual storytelling as we followed the familiar tale of Persephone, woven through with the truths of our new climate reality. Being outside as we heard this story only emphasized the way our natural environment deeply impacts our emotions, and reminds us how profound our connection to place really is. The multigenerational cast embodied the truth of our fight against climate change—we will have to reach across social divides, find wisdom in many places, and come together to understand how our world is changing, and to preserve our world for generations to come.” 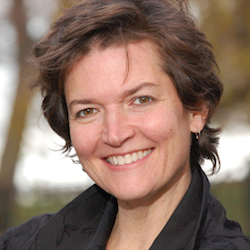 Jessica Thebus is a theater director, pageant creator, educator, and fellow at the Center for Humans and Nature. She was last seen at The Gift as the director of Richard III. Recently, her work was seen at Northlight Theater with Miss Bennet: Christmas at Pemberly, by Margot Melcon and Lauren Gunderson. Jessica has been a long-time associate of Steppenwolf Theater Company where she directed four large spectacle evenings at Millennium Park. Recently, she adapted and directed Shining Lives: a Musical at Northlight Theater (Jeff Award nomination for best new work), The Oldest Boy at The Marin Theater Company, Buzzer at the Goodman Theatre (where she previously directed both The Clean House and the world premiere of Stage Kiss by Sarah Ruhl), and In The Garden, a Darwinian Love Story at Lookingglass. Thebus holds a PhD in Performance Studies from Northwestern University, and is Director of the MFA Program in Directing at Northwestern University. 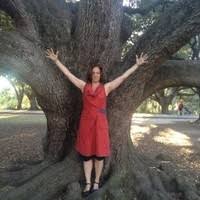 Tria Smith is a performer, teacher, writer, and designer who has been creating theater in Chicago for the past 30 years. Trained as a performer at the Piven Theater Workshop, Interlochen, Oberlin, Northwestern University, and the School of the Art Institute of Chicago, Tria has performed throughout Chicago and was a principal collaborator in Redmoon Theater since its inception. Tria taught at the Piven Theater Workshop for more than 15 years and was the founder of Redmoon Theater's Dramagirls program, a long-term creative mentorship for middle school girls on Chicago's West Side, for which she was named one of Today’s Chicago Women of the Year. Tria designed and produced A Persephone Pageant with Walkabout Theater as part of Chicago’s Night Out in the Parks—which included performances at Ragdale Foundation and the Logan Center at the University of Chicago as well as public parks across the city. In 2018 she engaged four community partners in the Edgewater neighborhood, to contribute to an Earth Day Clean-up Celebration + Pageant produced by Pivot Arts. 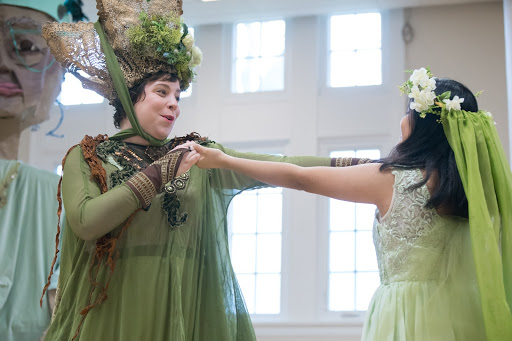 How to Work with the Persephone Project

If you have an environmental issue, a place, or a project that we might be able to support with a pageant or a workshop, we can create one at any scale. We have worked with schools, civic leadership, neighborhood organizations, foundations, universities, theater companies, and conferences. The first step would be to contact us and discuss your idea. 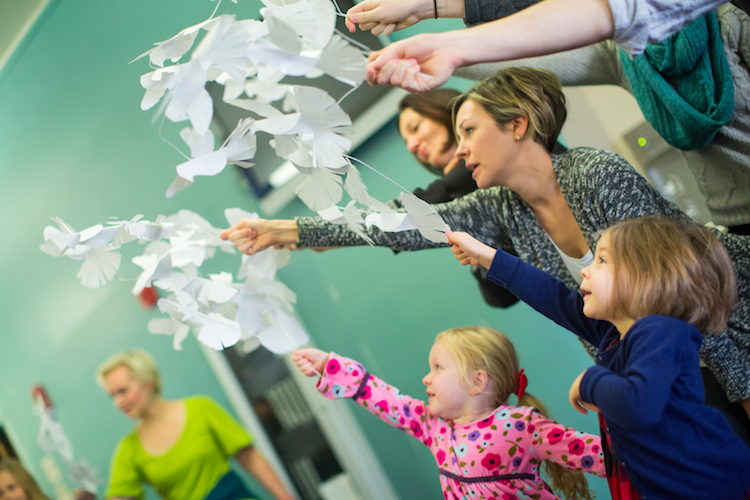 Pageant Workshops: How to Participate

The workshops we offer can stand alone or be experienced as a cumulative sequence. We use the bones of the myth of Persephone from Ovid’s Metamorphosis as an entry point to an embodied, vividly imagined journey of environmental justice and healing. The myth has a great deal to offer us through its narrative, its characters, and its images.

In the Persephone Pageant workshops, we create thresholds through which participants can step and inhabit the story through song, movement, image, metaphor, and performance. (No previous performance experience is necessary for any of the workshops.) 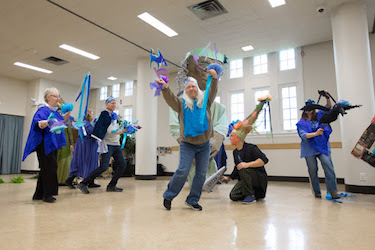 We use Theater Games and Improvisation to allow participants to step into the story of Persephone and use it to explore their own relationship to the natural world.

The story is told, accompanied by song. After that, improvisations begin with a simple word or phrase; sound and movement is added; until finally each participant creates an imagined embodied world. We then guide participants through writing exercises in order to discover how Persephone’s cyclical journey relates to the land, water. and air around them.

Equipment needed: Open space in which to move 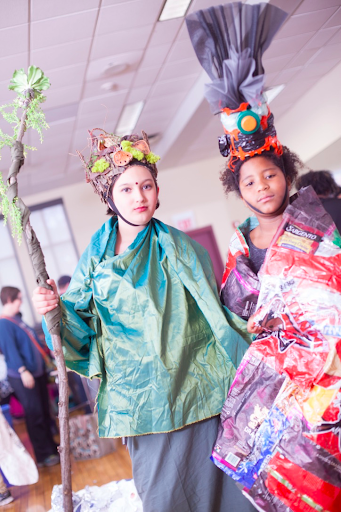 What does the goddess wear? Is she made of bark, sticks, moss, and gold? Does she wear ferns, blossoms, or antlers made of branches? The answer depends upon each participants’ connection to the figure of Persephone, her Mother, and their own journey in relation to the story.

Using elements from nature, beautiful fabrics, and couture remnants, each participant will create their own costume and crown. Music and story will accompany the exploration of materials. Finally, wearing these vestments, participants will create a procession. This enactment allows them to personify the elements of nature that move them. It invites them to imagine, build with their own hands, and wear a visible manifestation of their relationship with nature.

Equipment needed: Ideally an art studio, tables, outlets for glue guns, and a place to lay out curated materials. 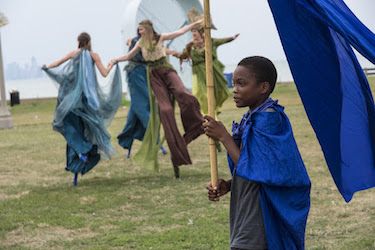 This workshop uses the art of Pageant Practice to create a simple and moving spectacle with the journey of Persephone as a guide.

The entire story is told by the participants in a way that is unique to this particular gathered group, using song, crowns and costumes, and physical embodiments of events in a natural landscape.

By creating a performance together, the participants imagine, make and enact a celebration of the land.

Equipment Needed: An open space to move, indoors or outdoors. 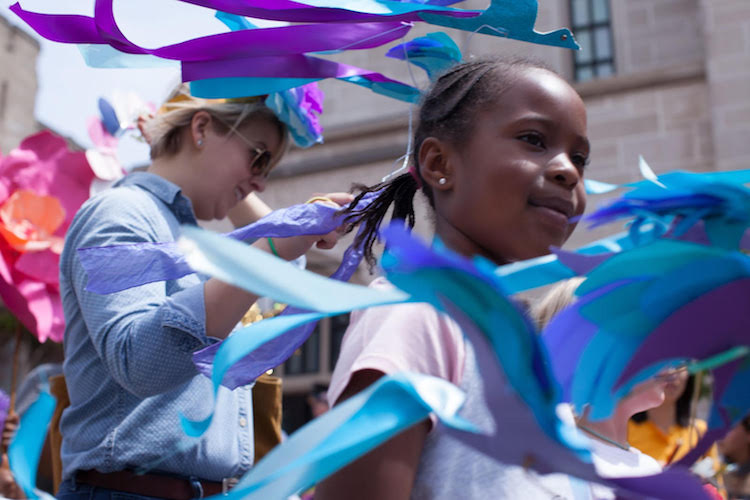 Please join Random Acts of Theater for a FLIGHT OF BIRDS on the beach. Socially distanced performance! We will meet on the evening of Saturday, July 11 at 6pm near Loyola Park, and bring this beautiful blue heron puppet (below) out into the prairie grass, the sand, and the water, to offer an image of Freedom and Power to all the people in the park. We will also have small blue birds that will surround the heron, and some great music. All ages welcome! Please wear blue, and we encourage you to perform with us! Or just watch. RSVP to Jessica Thebus and we will follow with details. Feel free to invite others. 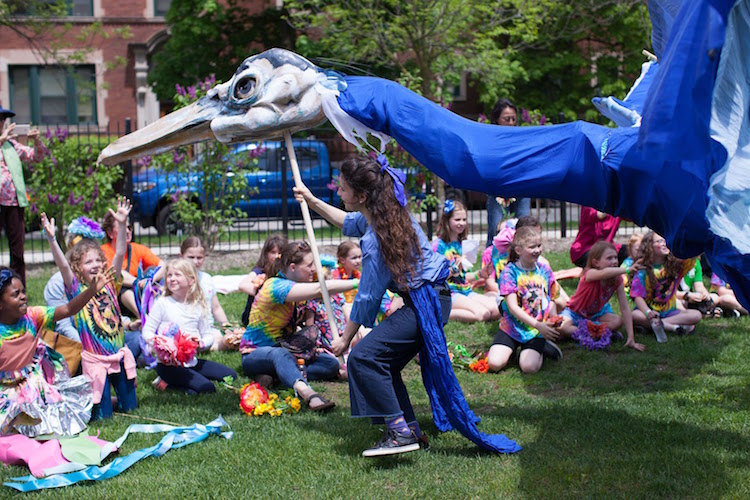