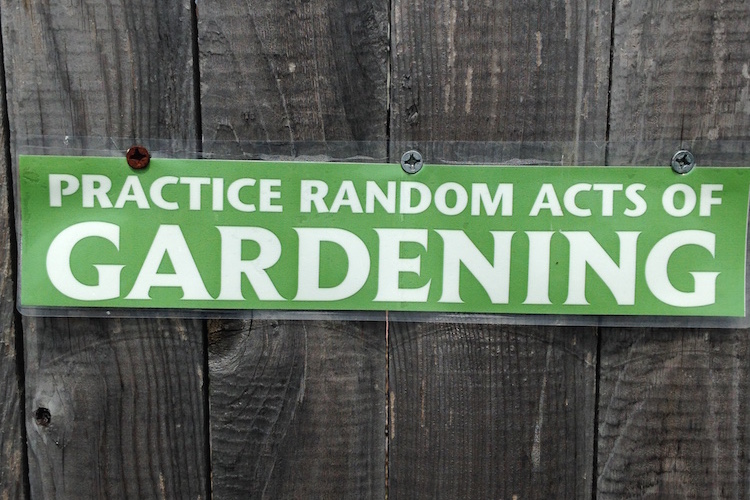 Ed. note — Gardening isn’t often thought of as an act of rebellion. This poem by Ellaraine Lockie whisks us into the quick-strike world of converting an eyesore into a welcoming sight. A little green where once there was bare dirt. A little music (courtesy of the performer Marshweed) where once there was only the sound of traffic. Reverent whispers where once there was nothing worth talking about. A little act of urban rebellion: saying yes to the forgotten and discarded patches of soil in order to create something new under the sun. A random act of greenness.

Offerings to the Green Gods

Not alley stench or gnaw of smog

scour of motors and smell of exhaust

Cause the air at the entrance of the Hollywood/Western

Metro station to hold its breath

Then the exhale rush of twenty-some passengers

to settle on a small plot of brown ground

One pushes a wheelbarrow holding

bags of soil and two toddlers

plastic jugs of water and babies on backs

and ushers the espionage

So they won't know what route I've gone

A video cameraman follows a woman

who carries a chalkboard with the words

She asks one of the toddlers

what is his favorite plant

He says "Daddy" through a mouthful of granola

Picks up a feather to stroke his father's cheek

as the father puts a painted lady into the ground

And the wing is on the bird

And the bird is in the nest

And the nest is on the branch

herself as Ginger and her partner as Desert Rose

The only girl I've ever loved

was born with roses in her eyes

Not even a siren's scream can cloud

the well-oiled hum of this mission

who seem to forget train schedules

and the gray hair of frenzy

in an undercover of quiet

Leave thermoses of beer for the band

And stir the air once more with their exit

to the train for the next Metro stop

Where another brown patch waits to be reborn

and where another band will perform the offertories

So they won't know what route I've gone

Marshweed is composer/performer Heather Lockie’s solo project. Lockie is an LA-based musician and artist who has worked collaboratively with and toured with various local and international artists. For documentation of current and recent projects, please visit www.heatherlockie.com. Various recordings can be heard at: marshweed.bandcamp.com, and the upcoming Marshweed collection of songs "Marshweed in the Garden" can be previewed at: www.marshweed.com (password “poohbear” to access the recordings).

For more on “guerrilla gardeners,” see this article, which includes information about the group in the poem, Los Angeles Guerrilla Gardening.