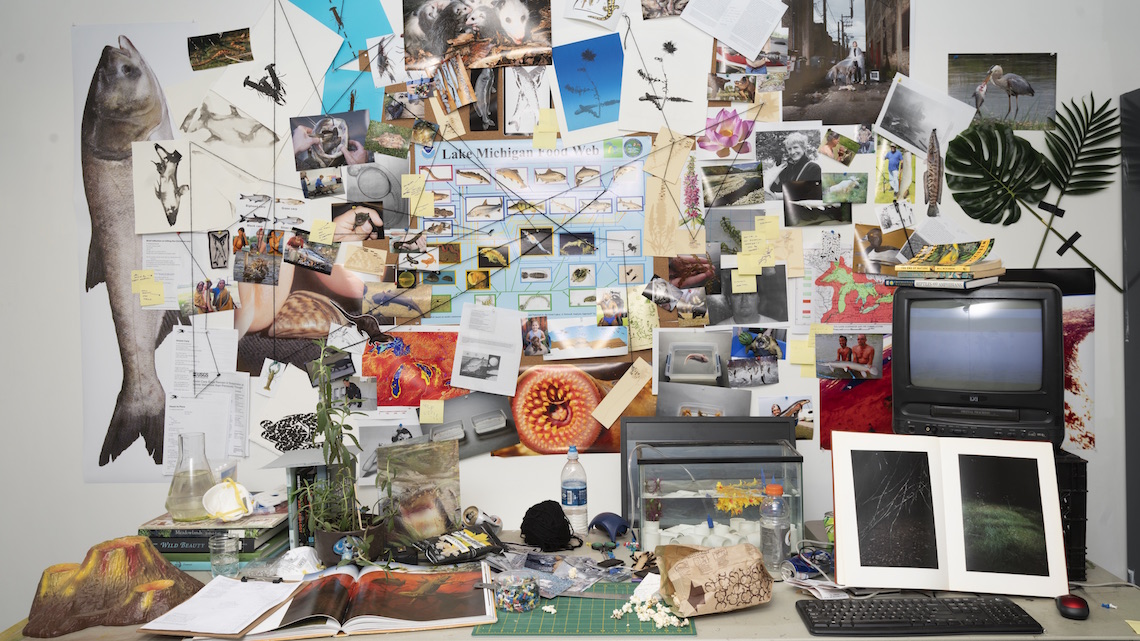 In undertaking this project, we thought of ourselves as a collective of occupiers called Willing Effort (W.E.): humans reckoning with the geography where we live. A changing climate calls for sincere and willing effort.

W.E. reconfigures relationships to our ecological realities through acts of friendship.

W.E. embraces novel landscapes, transgenic migrant species, human and non-human alike, to be integrated into our lives and ecosystems. A few moments dedicated to communicating mutuality are steps toward an integrated ecology. The actions that are modeled hope to enrich perspectives and build compassionate practices. They aim to give people and non-human people an equal footing in futurity. It is a means for survival through practical mythologies and a guide to maintaining ecosystems, transformation, and spirit through small actions that can be integrated into the everyday.

W.E. invites you to practice the hard work of living on a complex terra. Tucked between Chicago and Lake Michigan, W.E. proposes actions to create holistic connection with the Great Lakes system.

Myth of the Carp 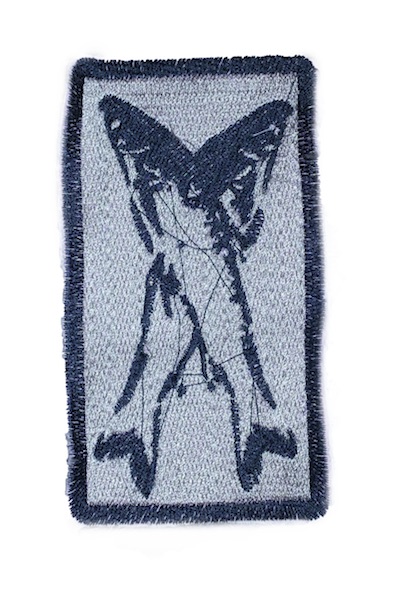 Generations will fall and carp will still be. They are cousins to goldfish: shimmering prizes in plastic baggies held by hamfisted humans at carnivals. They are kin to dragons.[5] When they first arrived they were named European Carp. A name is an important word. It holds futures and history, a way of being and becoming. Sheltered in murky waterways, gaping mouths gobbled flora. Growing long and silver. As they swam, they sang. Slurping up algae. They were then named Common Carp. Later, their kin were brought south to work. Filtering, cleaning, serving. Their bellies grew fat in the turbulent streams. Babies were born lest eggs lay at rest in static waters.[6] They thrive where they were invited. Their numbers began to crowd their quieter neighbors, families grew to thousands. It wasn’t long until they were called intruders: Asian Carp. Their real names are as follows: Grass Carp, Black Carp, Big-Headed Carp, and Silver Carp. Above us the sun rises. Carp moisten themselves in shared waters. Carp slip past expanses of electric water. Their kin jump upstream singing their names. 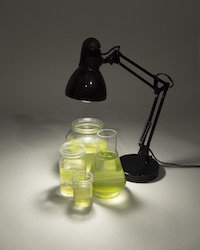 Carp have been judged invasive by local and national governments due to their rapidly increasing populations. As they travel from the Mississippi River Basin up into the Great Lakes system, a rising public anxiety grows around these species. W.E. invites you to think about the Myth of the Carp presented above in relation to the xenophobia that afflicts the history of the United States.

It isn't easy to dismantle long and deep harm that scars landscapes. Humanity is insensitive to its own faults. It is easier to slip a knife from gasping mouth to running fin. Will these transgressions be easily forgotten? Imagine carp as part of a native cosmology rather than a colonial theology, a symbolic rearrangement of cultural images at a time of crisis.[7]

Migration is a part of each of our personal histories, and acknowledging the movement of “others and otherness keep[s] us open to change, open to becoming never finally fixed in being. Alterities resist entropy and encourage creativity through relationality, sociality.”[8] 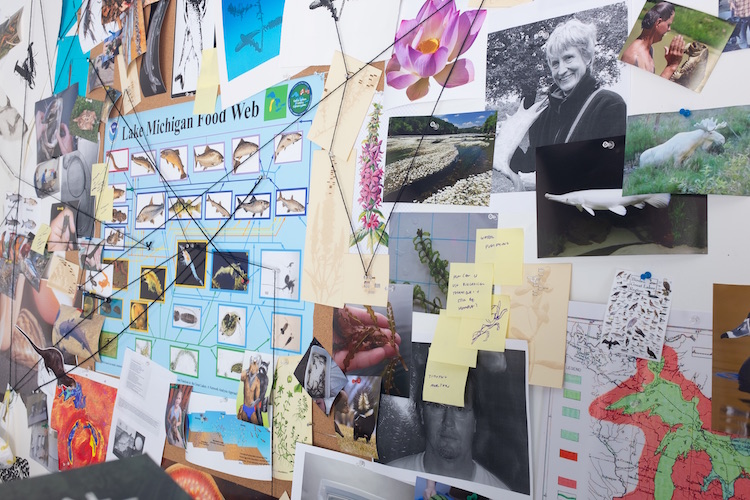 We propose an aesthetic model for thinking about transgenic organisms—species that have been genetically modified by the introduction of genetic material from another species, as they arise and as they already exist. This model accounts for our eco-aspirations.

Gene editing (a process of cutting and pasting genes) may soon allow humanity to accelerate evolution in a specified direction, at a rate never imagined to be possible. As a result, our ecosystems are abundant with transgenic organisms that need to be acknowledged and loved. Although these organisms are widespread in new ecosystems and are widely used in agriculture and medicine; but public opinion concerning these organisms remains skeptical and mostly negative. Artists should work toward establishing kinships with transgenic organisms by presenting them to the world in new and unique ways in the hope that they inspire compassion and change in the public mind.

By embracing transgenic organisms and investigating aesthetic entry points into genetic modification, we can begin reframing the mode in which we engage with the world we have created. In a globalized and scientifically advanced world, all species are simultaneously native and invasive; therefore, we should work to love and protect our disheveled ecosystems. We must address the inadequacies in our current perspectives and materialize these new modes of looking at the world.

The prints on this page are an example of how this aesthetic model can materialize. The cluster of images on the right depict six aquatic organisms, each with various cutouts that reference the genomes of these organisms. This process leaves room for speculation, mythologizing, and compassion for the spectator by elevating the genetic sequence to the surface of each image and giving that information prevalence within the representation.

The image below features the same six organisms, now hypothetically engineered to create a speculative transgenic organism capable of purifying lake water on a large scale. In this case, the process of printmaking unifies these species as one hybrid organism, as they are all rastered into one cooperative becoming. The print does not claim inherent truths; instead, it exaggerates the method of gene editing to create a fantastical, visually engaging image that hints at the aesthetic richness of transgenic organisms and the myths that they inspire. Using these images in tandem and in sequence, it creates a narrative that establishes transgenic organisms on the same ontological plain as non-transgenic organisms. 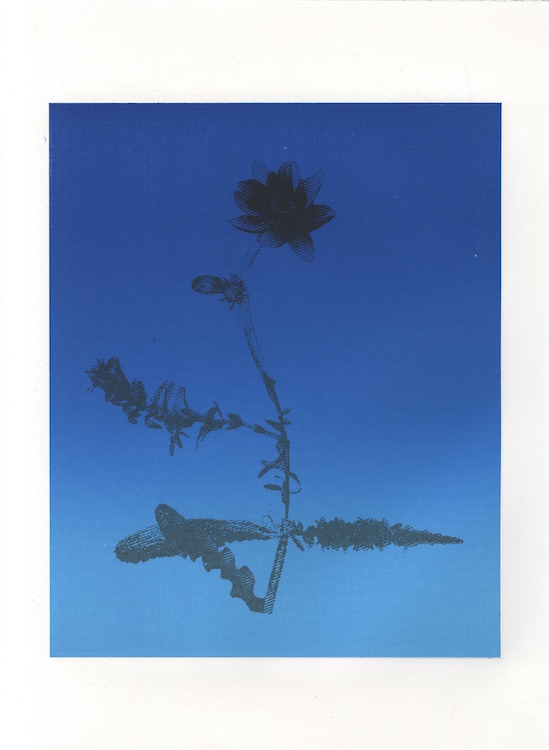 By aestheticizing the transgenic organisms of new ecologies and resisting the poetics of past ones, balance can be restored to our amalgamated planet. We have already redrawn the landscape, now we just need to reframe it.

Nature is almost everywhere. But wherever it is, there is one thing that nature is not: pristine.

When considering the topic of New Ecology, W.E. turns to the works of Donna Haraway, Emma Marris, and Timothy Morton—where a world full of rambunctious gardens,[9] dark ecologies,[10] and “staying with the trouble”[11] become ways of seeing the now differently. The easiest point of entry into New Ecology is recognition that you are a part of the system.

How do you interact with nature in the Anthropocene? Do you notice novel ecosystems popping up in back alleys? Do you curse “invader” organisms that are pillaging nostalgic ecosystems, or do you embrace newcomers to changing lands? Why should you care? Since you are already interacting with nature unconsciously, why not interact with a purpose? Why not help it help you? If you cared about your involvement in the Anthropocene, the world might start to seem less hopeless. Can your care help find new habitats for non-humans? A few houseplants maybe? Can your care extend empathy to humans and non-humans alike in an increasingly stressful existence in an assuredly unpristine world? Perhaps. 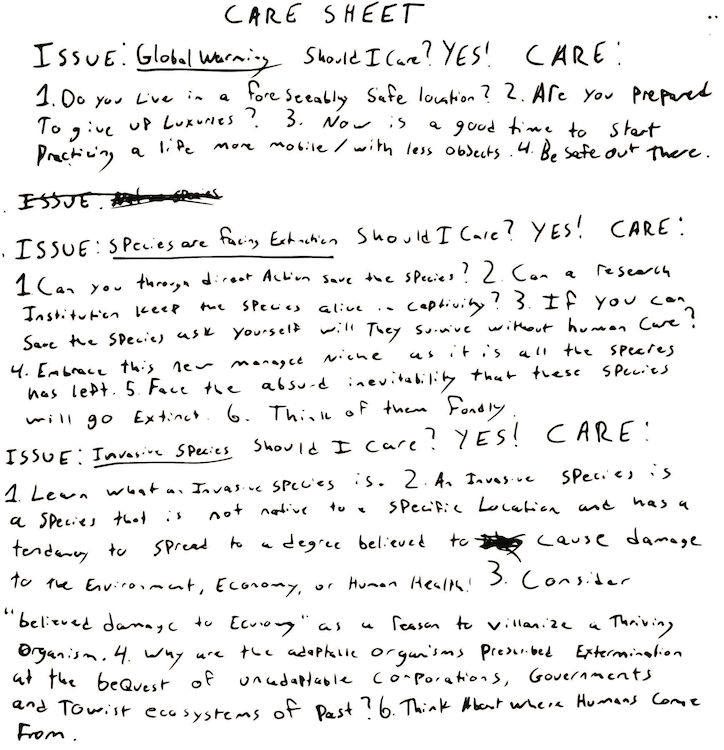 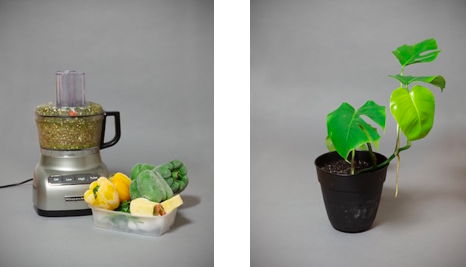 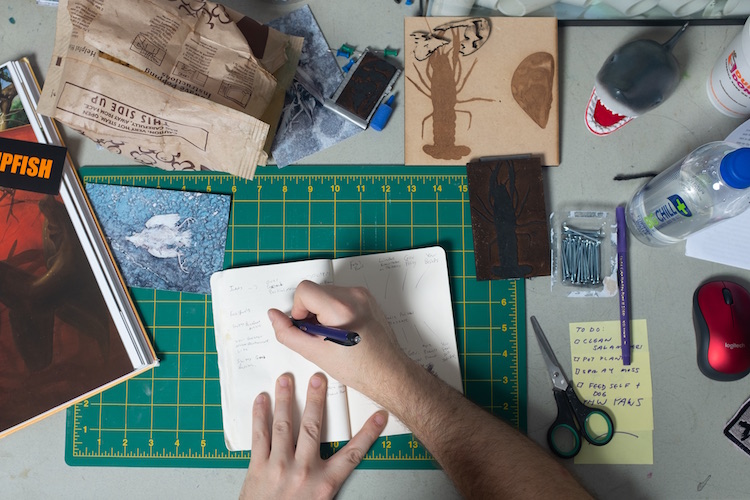 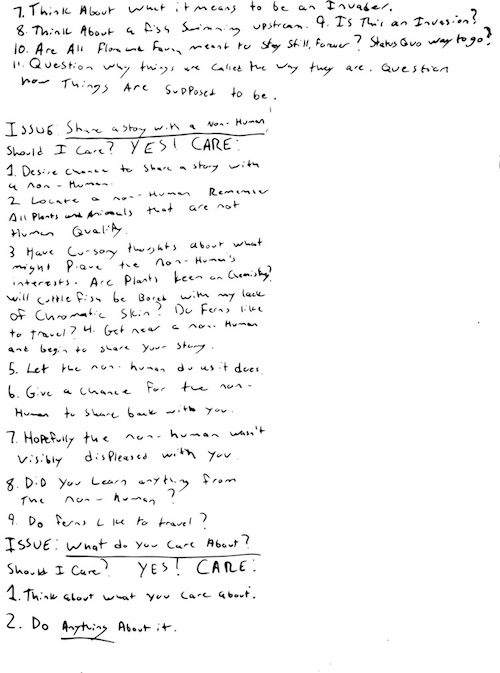 [7] Alex Hunt, “In Search of Anaya’s Carp: Mapping Ecological Consciousness and Chicano Myth,” Interdisciplinary Studies in Literature and the Environment 12, no. 2 (2005): 179-206.

Sound Artist, Student - School of the Art Institute of Chicago

Dann Disciglio is a graduate student pursuing an MFA from the Sound department at SAIC. His work investigates and explicates the grey area between art and science. He seeks to make works that make people both think and feel.

Digital Artist, Student - School of the Art Institute of Chicago

Gabriela Saucedo is a Latinx artist based in Chicago. She works in 3D modeling, virtual installation, and web-based forms, concentrating on landscapes and the cognitive/spiritual impact of these spaces.

Artist, Student - School of the Art Institute of Chicago

Nicolas Muratore is a French undergraduate student from the Gerrit Rietveld Academie in Amsterdam. He is currently on an exchange program for the fall semester at the School of the Art Institute of Chicago. His practice revolves around art, science, and printmaking.

Artist, Student - School of the Art Institute of Chicago

Travis Lee Mitzel is a Chicago-Pittsburgh based artist exploring ecological concerns and existing in the Anthropocene. Often working with biological material to create photographic, video, and sculptural forms, Travis has a focus on new ecologies and recontextualizing human histories and relationships with nonhumans.