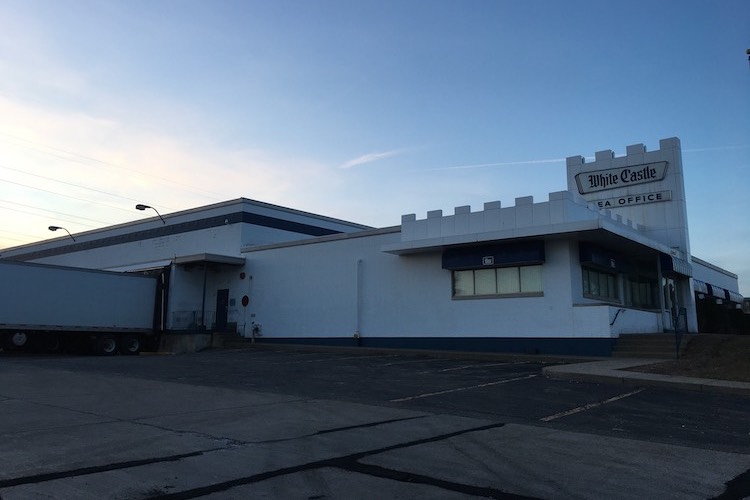 As a hockey mom of three, I spend an inordinate amount of time at the rink. This also means that I spend a huge amount of time in the car driving to and from the rink and in arenas watching practices and games. So much time spent in sterile indoor spaces does not sit well with me as an environmental ethicist, a fact that appears to be of little significance to my three teenage children, Inga, Clara, and Carl, all of whom seem to love hockey more with every waking hour. Thus, this season I resolved to make do. I would find nature at the rink and I would like doing it.

It wasn’t as easy as it might seem. Ice rinks tend to be located in highly industrial areas surrounded by big-box warehouses and lots of concrete. One has to look hard to find anything green, and what one does find is far from most naturalists’ dreams: a patch of fertilized grass, a lone ornamental tree, a short row of landscaped shrubs. Granted there are exceptions. Every fall, Inga’s and Clara’s team plays in a tournament in Burlington, Vermont, where the rink is perched on the shores of Lake Champlain, surrounded by thick woods and nature trails. In Minnesota, where my husband Jeff grew up, neighborhood rinks are typically bordered by a community park or recreation area with some green space. Bolzano, Italy, boasts one of the most beautiful buildings, let alone rinks, I have ever seen—think post-and-beam construction, windows all around, mountain views of the Alps. But these are far and few between. Dimly lit, aluminum pole, function-over-form, barn-like buildings are the norm. 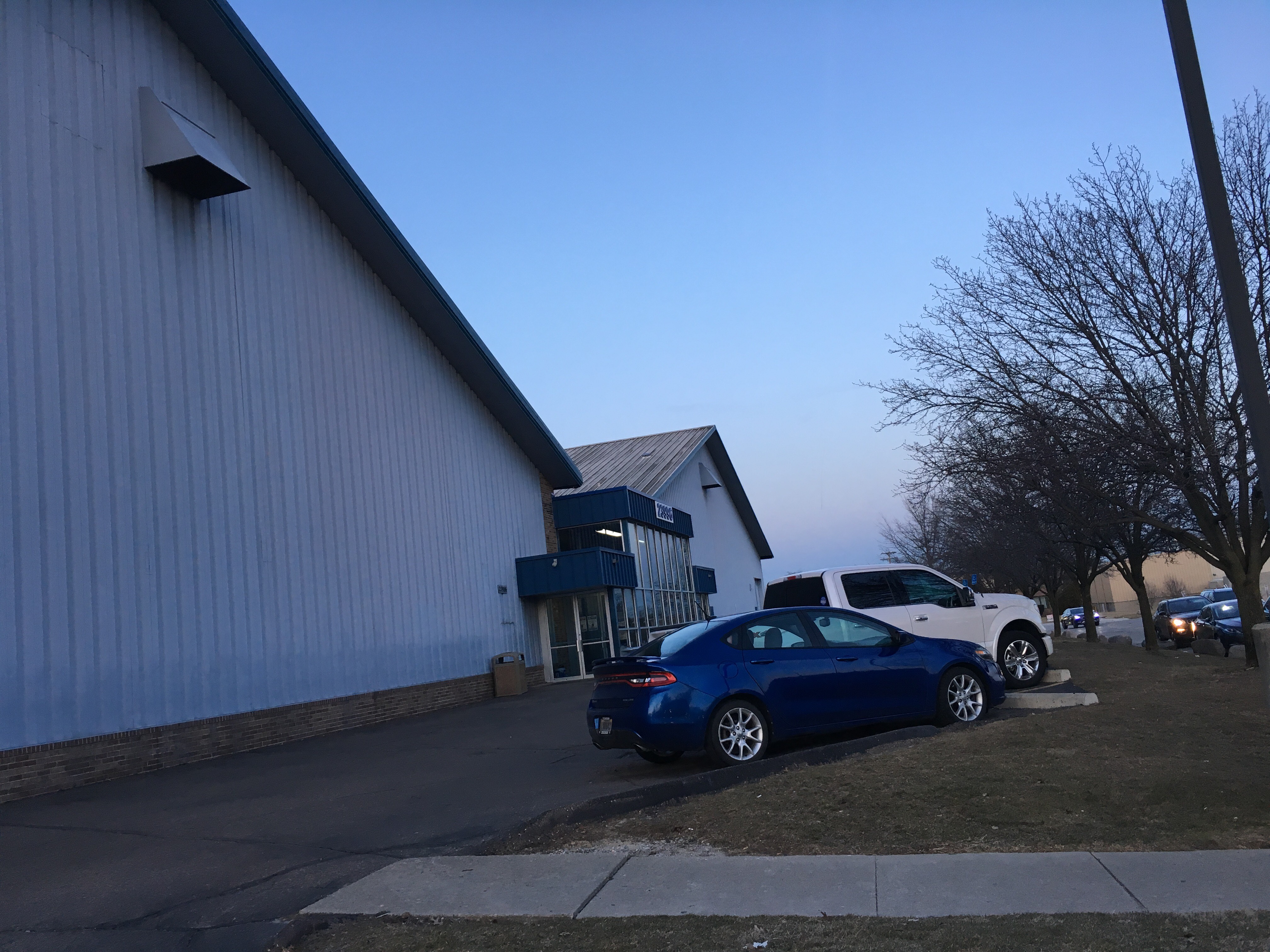 My first experience searching for nature at the rink was at Suburban Ice East Lansing where Inga, Clara, and Carl played when they were small. The rink was better than average as far as nature goes. A trail, bordered by a large woodlot and the Red Cedar River, provided a route for jogging and hiking when I was waiting for practices to finish or games to begin. I would spot red-tailed hawks and whitetail deer. Occasionally I would hear the call of a barred owl. Once I scared a red fox out of a gully. Early in the fall, a small meadow would fill with goldenrod and Queen Anne’s lace. Fed up with suburban living one August, I persuaded (forced) Inga, Clara, and Carl to canoe to the rink from our house up river. Sticks and gloves in tow, we arrived an hour and a half later, only for Carl to get stuck in the mud hiking up the bank to the arena.

But now Inga and Clara play in Detroit and Carl plays in Grand Rapids and my opportunities for nature exploration have significantly diminished. The girls’ home rink sits between a wholesale carpet warehouse and a White Castle hamburger distribution center. Carl’s rink lies on the north side of a large landfill. Finding and liking nature at these rinks is difficult. So I have had to do some digging. Here is what I have found.

Inga and Clara’s rink in metro-Detroit

The arena sits in the middle of approximately fifty acres of warehouses. In addition to the carpet and fast food restaurant buildings, there are marble and granite wholesalers, tool and die manufacturers, and numerous other companies with nondescript, industrial sounding names. For the first few weeks that the girls played out of this rink, I ran around the industrial park and then out to the main road. A month in, I discovered a little hideaway on the east side of the loop of the industrial drive. The hideaway is the site of a recording studio with more land than any of the other surrounding buildings, including a small hill lined with Michigan white pines. Different from the other warehouses, the studio’s buildings are made of cedar and have large windows. Behind the farthest building from the road sit a couple of dumpsters and a small area of ten-foot-tall grasses and dense brush.

I discovered the hideaway on a bright, sunny, October afternoon. The girls had a short practice and I did not have time to linger. The next time I visited was during a night practice and it was dark outside, save some low-lit security lights. I walked to the back of the parking lot and sat down on the curb facing the grass and brush. I closed my eyes for thirty seconds, a minute, then scratch, claw, scratch, scratch, claw. I whipped around not sure where the sound was coming from. I panned the dark up and down until I found the pine tree that was making the noise. Fifteen feet up the tree, a porcupine sat dead still. I sat dead still. The porcupine stared. I stared. Her eyes glowed bright white. After what felt like an hour, she shimmied higher into the branches until I could no longer see her. Perched for the night, I stood up as quietly as possible and tiptoed back to the rink. 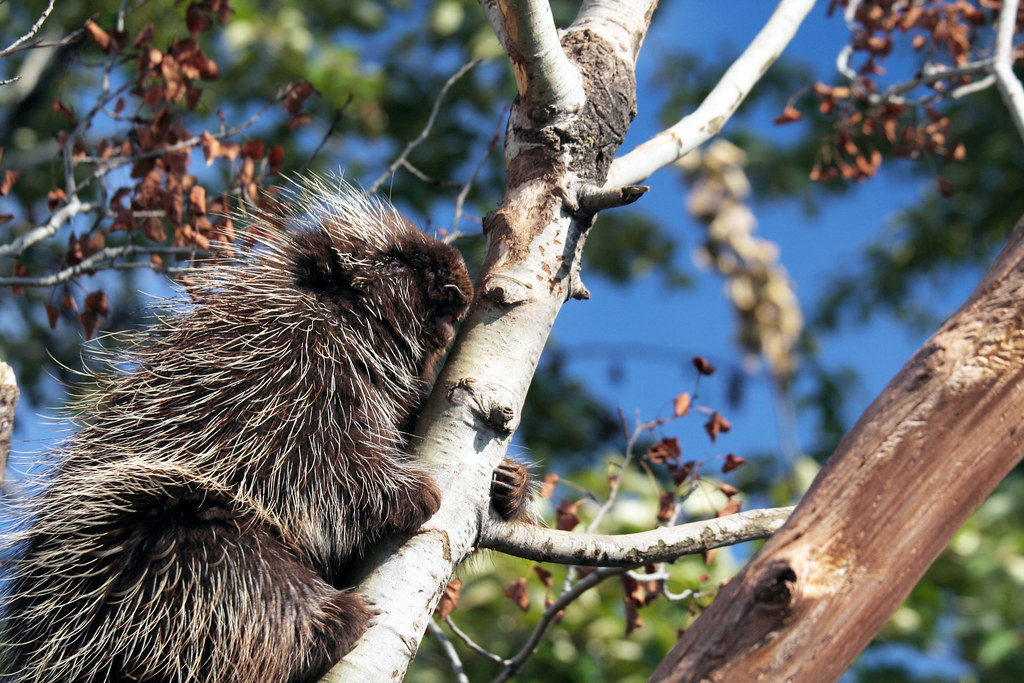 And there’s more. When Inga and Clara first started playing in Detroit, I drove around the vicinity of their new rink in desperate search of green. What I found was a large educational farmstead operated by the university where I teach. I had no idea that the farm existed, let alone that it was only a couple of miles from the arena. On the nearly two hundred acres of rolling farmland, there are horses, cows, sheep, goats, and chickens. Barns and outbuildings are edged with a small apple orchard and pumpkin patch. A large garden, greenhouse, and sugar bush provide educational opportunities for school and community groups. Trails run through the woods that border the farm. When I have time, I hike, jog, snowshoe, or ski here, chasing out rabbits and ruffed grouse. 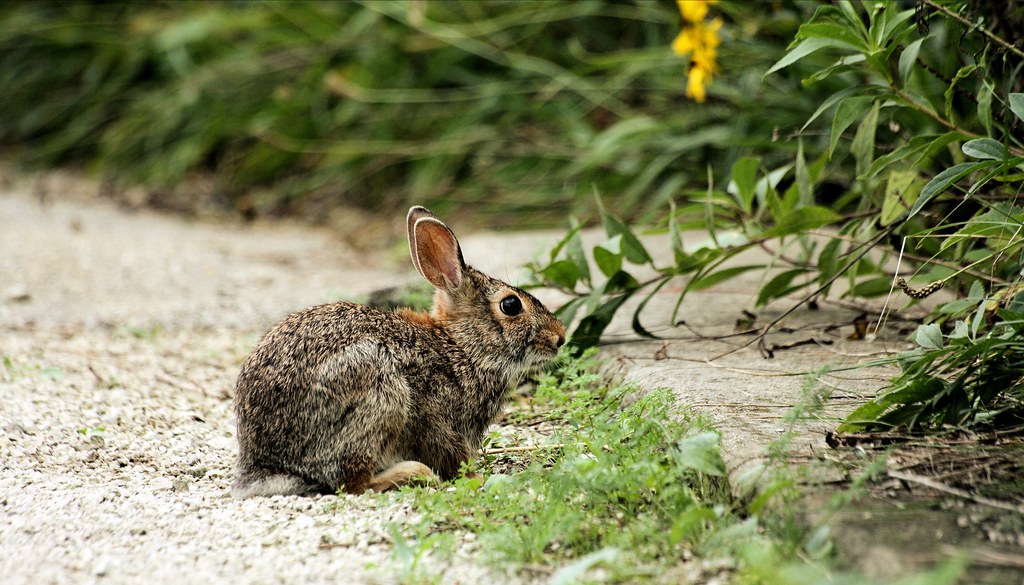 On sunny days, hundreds of sea gulls flock to the top of the flat-roofed rink. Landfill to the south, farm to the north, unidentified industrial buildings to the east and west, Carl’s rink is located in an agricultural area of Grand Rapids that was settled by Dutch immigrants in the nineteenth century. There is more land and less concrete than at Inga’s and Clara’s rink but this does not solve the problem of the dump next door. Or the seagulls who shit on my head when I drop off Carl on days when they have come to roost.

Most times, when I am at Carl’s rink, it is evening and the gulls have gone back to the dump. During a practice early in the season, I decided to explore the area behind the rink where nobody but the Zamboni driver parks. I drove to the edge of the parking lot where a narrow path cuts through a wooded edge to the industrial building next door. I walked slowly along the path, pulling prickers off my pants and jacket as I went. When I reached the lot, two semi-trucks were backed up to a loading dock for unpacking. I walked past the trucks and main building to a scruffy, wooded area fringed with twenty-foot blue spruces. Through the trees was a small wetland pond surrounded by cattails. Two pairs of mallard ducks paddled in “s” patterns. I sat down to watch. Careening with ease they appeared at first not to notice me. A couple of minutes later I sensed that they were becoming antsy. They darted their heads and swam faster. One-one thousand, two-one thousand, fluuuussshhhh! Up and out they went. 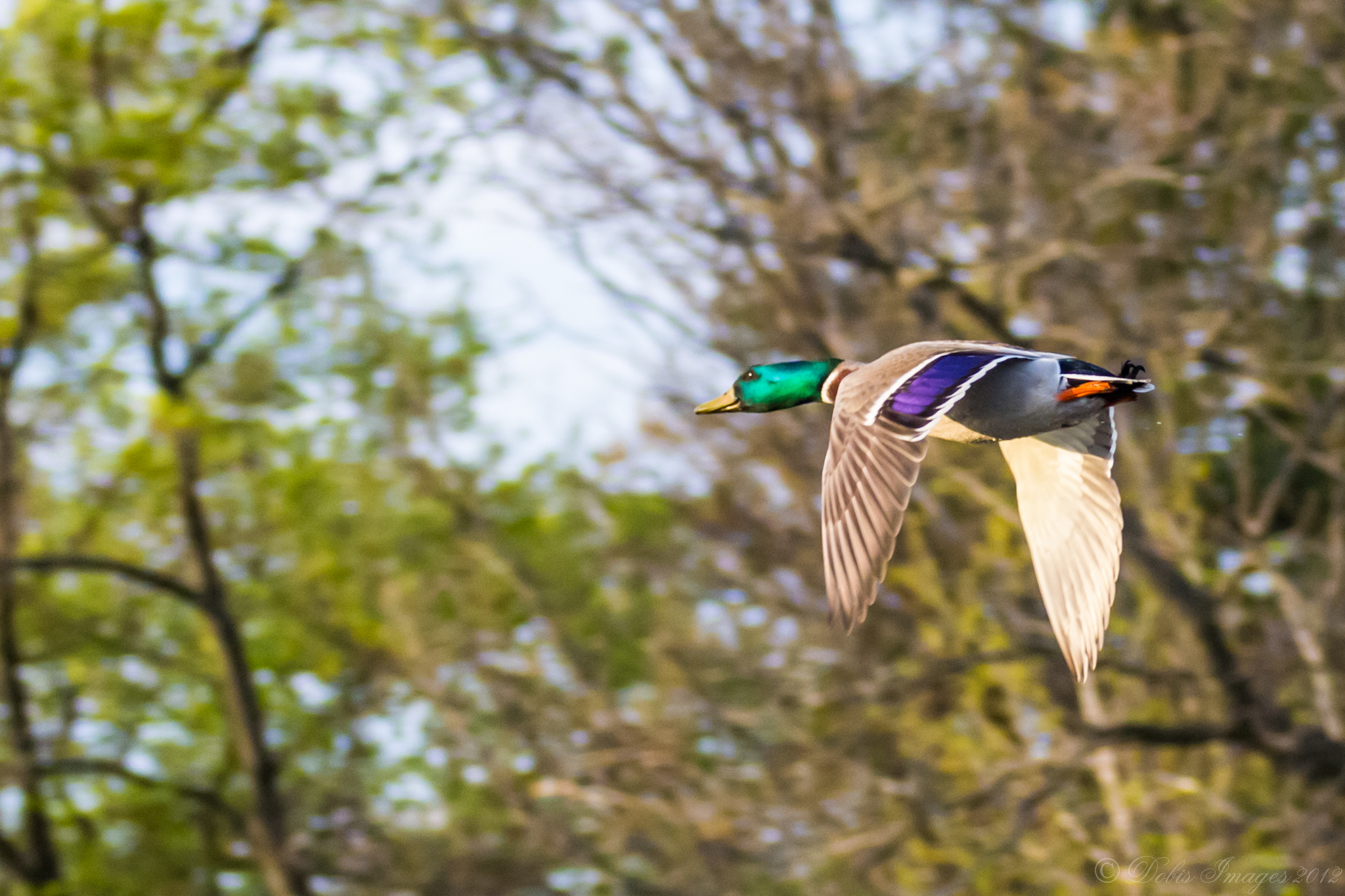 About a mile north of Carl’s rink, I discovered a county park. A small creek runs through a wooded area that borders the edge of playing fields, picnic areas, and a playground. One evening, I followed the creek to the back of the park where a small footpath runs through the woods and dead-ends at a giant Michigan beech. Smooth and grey, the tree stood grandly in a small clearing. When I first encountered the tree, I ran my hand along the bark, remembering the giant beech tree that stood in the middle of the woods that surrounded my childhood home in southwest Michigan. That tree too sat at the end of a path that led through the woods. Every year on our birthdays, my father would take my three sisters and I on a walk to the tree. We would sit down against its trunk and talk. We wouldn’t stay long and I don’t remember what we talked about, but I remember the tree, the texture of the trunk, the color of the bark and leaves. This one by Carl’s rink reminds me of it, connecting the dots of my life now with those childhood fascinations and feelings.

This night in late November at Carl’s rink, I do not venture from the parking lot at the edge of the dump. We had our first snow this week. I brought along my long down coat in case I had time for a walk. I put it on, along with hat and mittens, and get out of the car. A full moon hangs in the night sky. I walk to a patch of grass along the parking lot and sit down, moon resting just above the top of the landfill where a dozen trucks are lined up for tomorrow’s work. Eyes closed, I breathe in and out, in and out. Cold, I walk back to the car. Waiting for Carl’s practice to end, I sit facing the moon. Spirit settled, I reach for the bag of grapes I brought for a post-practice snack. I open the van door, rinse the grapes with a bottle of water, and set them on a stack of napkins on the center console. While the kids hone their skating skills inside the arena, the moon above keeps me company. I have found nature at the rink, I realize in that moment, and I actually kind of like it. 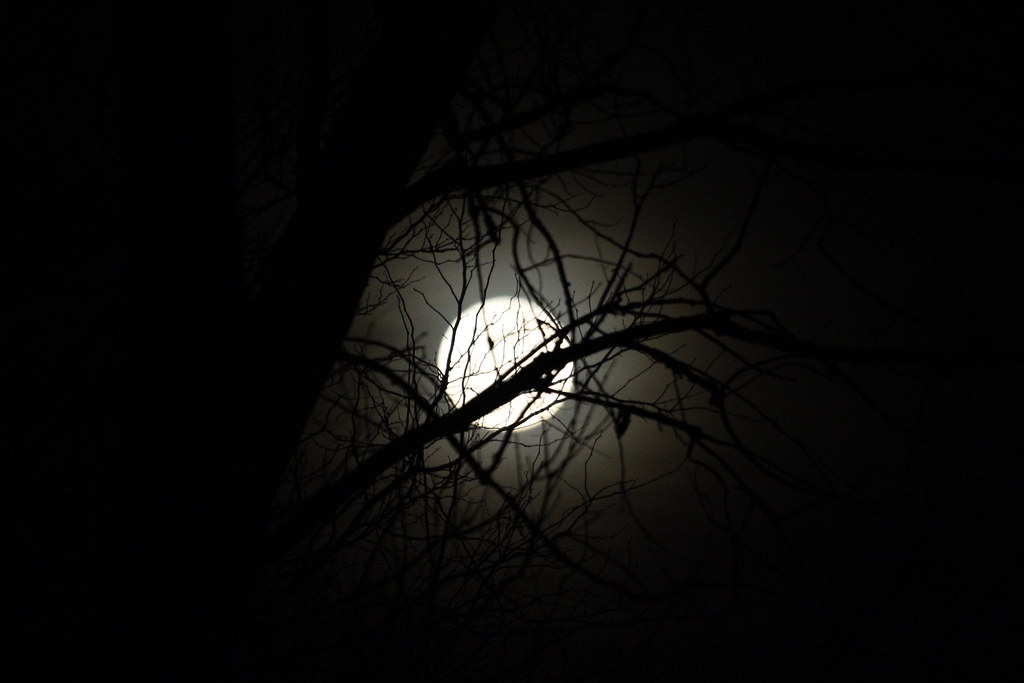