Jens Jensen’s life (1860–1951) was the iconic American story. Emigrating from a foreign country seeking opportunity and social mobility, he began by sweeping the streets of a major metropolis only to rise through the ranks to shape some of the city’s most significant parks and later to work with titans of industry. Through it all, Jensen remained committed to his core value: that connecting people to nature was critical to both the health of the individual and society as a whole.

The Living Green follows a straightforward chronology of Jensen’s life with historic photos and footage providing context for life in Chicago from the late 1800s through the 1930s. Those familiar with the Chicago region will likely be amazed at how influential Jensen and his contemporaries from this time period were in shaping the area’s landscape and aesthetic. The film also presents how Chicago’s history of corrupt politics impacted Jensen’s career.

The film highlights Jensen’s critique of Fredrick Law Olmstead and Daniel Burnham’s plan for Chicago’s World’s Fair: Columbian Exposition in 1893 and his relationships with other notable thinkers and doers such as Jane Adams, Henry Cowles, Frank Lloyd Wright, and generally the “prairie school” of designers. It demonstrates what a hotbed of social and ecological thinking Chicago was at the turn of the century. If these names are not familiar to you, watching the film to get quick introductions to them is worth the time alone. If the film had delved into some of the convergences and contrasts among these relationships a bit more, it could have added extra creative tension for the story line.

Aside from its historical interest, the film provides a helpful resource for our thinking about contemporary issues, as well. Take the current conversation and ethical debate about wealth disparity, for example. The Living Green gives wealth inequality a valuable historical context through the stark imagery showing child labor abuses and scenes of children and families playing in city streets literally adjacent to dead livestock. It further advances the ethical dilemmas of inequality by using Jensen’s own life and career to examine the conflicting obligations to one’s own personal mission with the obligation to make a living and provide for a family. Victimized by the political corruption in Chicago, Jensen began his career, out of necessity, by designing personal estates for elite Americans like the Ford family. 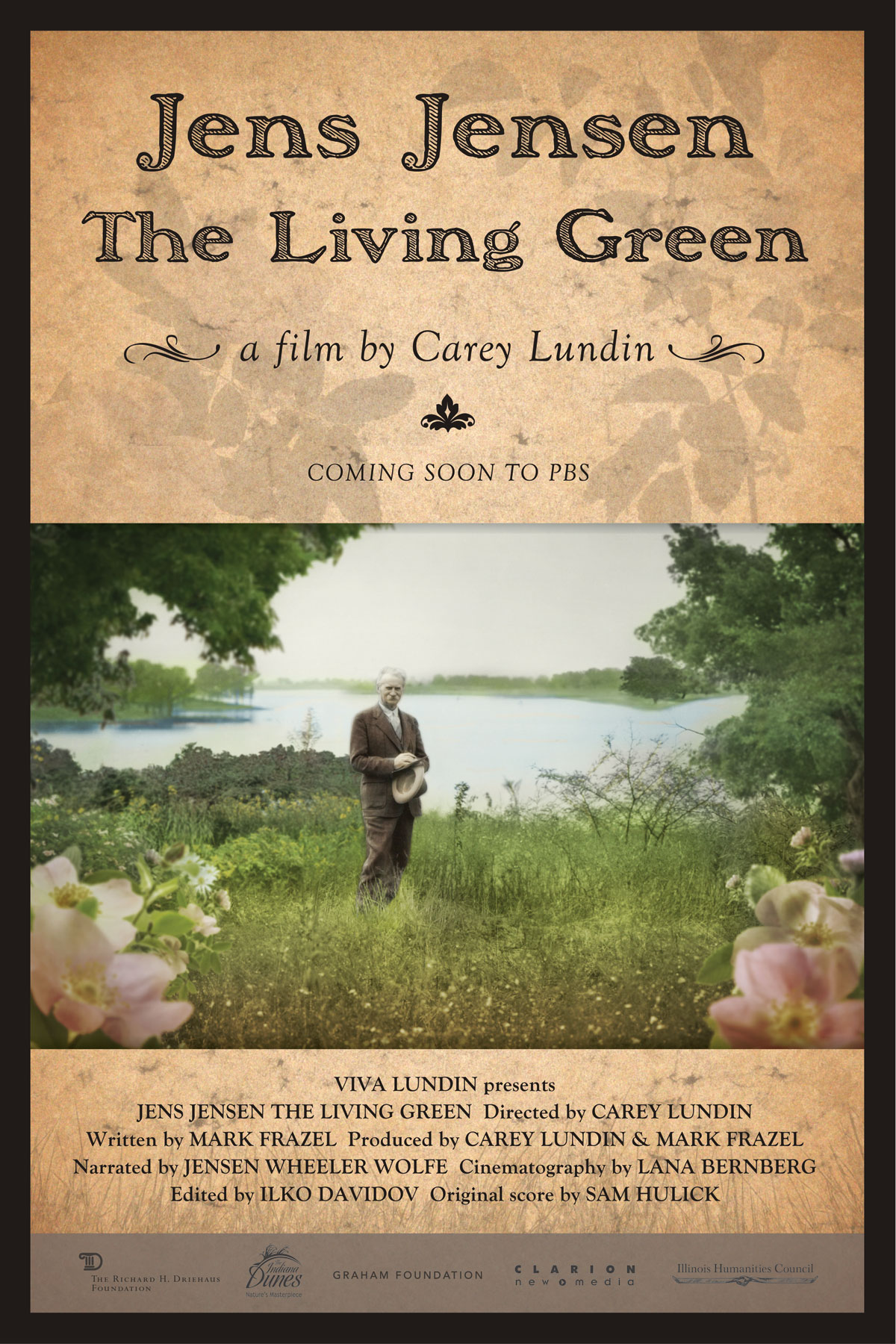 This is particularly ironic as the film communicates just how much Jensen and many of his peers were committed to developing an “American” aesthetic that intentionally—and often explicitly—referenced nature as opposed to the formal castles and gardens of the European tradition. Parks and gardens such as Central Park (Olmstead) and Columbus Park (Jensen) exemplify this movement’s effort to empower the design of public spaces that gesture towards equity and opportunity for all citizens, not just some citizens.

It is powerful and poignant to remember the fact that many of Jensen’s signature parks currently sit amongst some of the most diverse and economically depressed neighborhoods in Chicago. This is a connection that the film could have explored more fully. It is my understanding that Jensen’s parks continue to serve as outdoor respites and for many urban residents provide some of the most “wild” places they will ever visit. Some of the parks even have active community gardening programs, both on site and through use of vacant lots to help residents in the area grow vegetables and further “beautify” what were previously unsightly and sometimes even unsafe areas. I think that The Living Green would be even more powerful if it revealed these connections more explicitly and if we had heard more from current residents and park users, in addition to the primarily academic and mostly white faces and voices in the film. This would have driven home just how relevant Jensen’s emphasis on equitable access to nature continues to be.

The Living Green shows Jensen among some of the biggest names of our country’s effort to shape a “democratic,” or naturalistic, aesthetic, and at the end connects this to the modern “sustainability” movement. The film helps reinforce that “sustainability” did not grow out of the recent green building movement, the emergence of conservation biology in the 1980s and 1990s, or even the environmental movement of the 1970s. These values go back much further—indeed, they predate Jensen and his contemporaries. But Jensen was one of the pioneers in connecting these values with an urbanizing population, finding ways that simultaneously protected natural areas, like the Indiana Dunes, while interpreting and bringing these values into the city through parks and gardens.

Those with a connection to Chicago will get a great history lesson and new insights into important places throughout the region. For viewers without a geographical connection, The Living Green offers a broader perspective on the conservation movement and reminds us that these ideas and ideals are not only still alive today, but need even more vitality if we hope to inform and inspire a healthier relationship between humans and nature.

Wellington "Buddy" Huffaker, IV, is the executive director of the Aldo Leopold Foundation in Baraboo, Wisconsin. With an academic background in landscape architecture and plant ecology, Buddy joined the organization as a seasonal fellow in 1996.