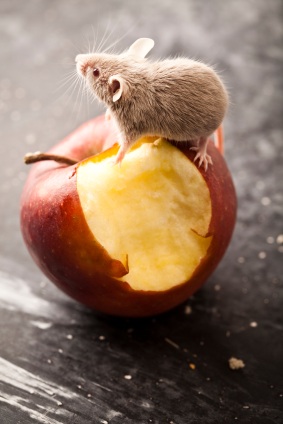 There are a thousand ways for a mouse to get in the house. It’s a sieve. They scuttle inside at first frost. In Leaves of Grass, Walt Whitman claims: “A mouse is miracle enough to stagger sextillions of infidels.” But a mouse is also miracle enough to become sextillions of infidels:  2 turn into 10, and then 10 into 50, in a month or two. I like them, but it gets crowded. Last week I woke to find two sitting on the work bench in a pool of moonlight, noisily munching on opposite sides of a large, red Cortland apple. Each had chewed away a tablespoon or so of the flesh and left a tiny pile of apple skin gnawings. The next morning I bought cheap wooden traps, smeared them with chunky peanut butter, and set them on the trails of excrement the mice left along the floor. I cringed at the two neck-cracking snaps that night, but it seemed necessary rather than cruel.

A few days later I agonized over a fleeing mouse that somehow jumped a foot off the ground into the crack between the hinged side of the door and the jam, just as I was leaving. I nearly cut him in two. Grossly pinched in the crack, his bulging black eyes pleaded with me, but it was too late. I closed the door to free him and he fell bloody and mangled to the ground. I killed him quickly with a brick, but felt his desperate gaze all day.

I usually only see mice inside at night, but today one was lured out in the middle of the afternoon by a trap someone else had set. He carefully nibbled all the peanut butter off the metal bait plate, and then walked right over the trap, setting it off on his head. Ten minutes later a second mouse appeared and began nosing the trap with the dead mouse all over the floor, and nibbling at the metal bars, as if trying to free him. Was this the “spouse mouse” coming to grieve its loss? I felt awful. I kept watching. When he finally flipped the trap over, his motivation was clear. He was after a bit of peanut butter on the wooden base of the trap, under the dead mouse’s belly. He was trying to move the dead mouse out of the way so he could get to the food.

We are. A recent study of the mouse’s genome revealed that both mice and humans have about 30,000 genes, with only about 300 unique to either species. Human beings share 99% of their genes with mice. Including the genes required to make a tail!  Yet that single percentage point is immense. It is why people refer to other people as “animals” only when they wish to insult them. Animals don’t love, they reproduce. They don’t reflect, they respond. They are instinctive, irrational, violent.

Humans, however, have reason—that beautiful and confusing gift. Like truth, reason is subjective and relative. It leads to good and evil: to the theory of relativity, the polio vaccine, the civil rights movement; but also to slavery, Auschwitz, poisoned rivers, holes in the ozone. If not coupled with compassion, human reason is no less cruel and no more just than animal instinct.

Does reason enhance the human capacity to attend to the world? Our five senses are less complex and useful than in other mammals. We cannot follow our nose or ears through the woods to our children or to food. I sometimes wonder if this limited awareness reinforces our carefully reasoned exploitation of the natural world, if our minimal ability to taste and hear and see that world prevents us from re-joining it. Has reason itself, that rare ability to judge and discern, disconnected us?

I watch a chipmunk out my window chew up a mulberry and pack the little bits in his bulging cheeks. And I wonder: How did the human, the reason-able species develop the power to destroy all others? Why can we not resist the temptation to commodify and sell the world, rather than simply belong to it? What went wrong?

Somewhere between learning to walk and a BA degree we forget that we are animals: connected and created. Creatures. We cannot manufacture ourselves (or at least not yet). Like mice and raccoons we are squeezed from the warm cavity of our mothers, born alive and squirming. Later we die. Out hearts fail and our nerves stop firing.  If we were not embalmed and placed in a sealed airless coffin, we too would rot in a ditch like roadkill. We would belong again.

This afternoon I witnessed the death of another small creature. Though unlike the mouse I caught in the door, this death seemed holy rather than tragic. While pumping my bike along Flynn Road, the two-lane black top that runs by our house, I noticed a glint of yellow on the road ahead. I coasted up near the ditch to find a goldfinch lying in the gravel, upright. The feathers were bright and clean—no evidence it had hit a windshield or been raked by a crow—a perfect specimen. Yet it was not flapping or trying to escape, and its eyes were closed. It lay in the gravel softly breathing. I got closer, put my face down near its feathers, hoping to find out what was wrong. And then this: its eyes opened—two shiny black beads peering at me for several seconds. I felt it sensed that I was there and had used all its energy to confirm its suspicion, to see what I was. Then the eyes closed, the breathing slowed, and stopped. The goldfinch died and I had no idea why—disease, poison, or, hopefully, a natural end. Perhaps he waited too long to head south.

I’m still wondering about that open-eyed instant of connection, about being the last living thing the animal saw. Does dying alone matter to creatures that live by instinct rather than reason? Maybe the goldfinch didn’t even notice me in its last moment, but was looking beyond—at the empty sky, the rustling weeds, the stark silhouette of a maple tree—sensing not aloneness but belonging.

Backyards, Mortality, To Be Human