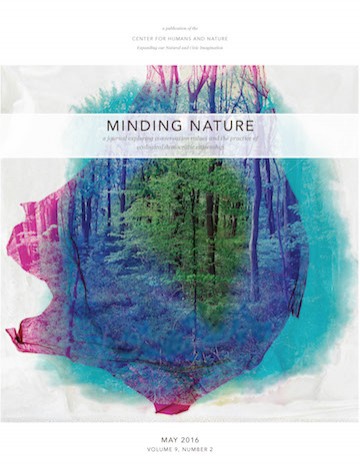 The Architecture of Desire

I’m off to Edinburgh this summer to speak on solidarity and climate change, topics too little discussed during the recent decades of neoliberalism and too infrequently seen as essentially interconnected. The venue is auspicious, for the world has been and continues to be harmed by misinterpretations of Adam Smith, the great eighteenth century thinker of that city’s great university. What is the role of human interests in human behavior? What drives the choices human beings make in regard to the ways they use each other (laboring people) and the material world they inhabit (things)?

A regular feature calling attention to important books and articles that CHN staff, board, and collaborating scholars are reading and recommend.

...along with the restoration of all of these natural areas throughout the city that provide habitat for other species, that provide us places of connection and solace, we need a “restoryation” of the city. And so [City Creatures] is putting those stories out there. In other words, in order to care about our cities we are going to have to hear stories that tell us that these cities are valuable as natural areas, that they can be places of connection.

It has been proposed that humans are now living within a period of the Earth’s history appropriately named “The Anthropocene.” The name is derived from the observed human influence and indeed increasing dominance of climatic, biophysical, and evolutionary processes occurring at a planetary scale. The issue of human dominance is not simply climate change (as bad as that is), it is the whole capitalist development paradigm that is at the dark heart of maldevelopment—that which undermines and destroys the very foundations of all life on earth.

In his 1998 book, Consilience, Harvard biologist E.O. Wilson explores the concept of unifications in knowledge. He examines the idea that synthesizing approaches and insights from the humanities and sciences can open powerful new windows to contemporary problems. “Ongoing fragmentation[s] of knowledge,” he writes, “are not reflections of the real world but artifacts of scholarship.”

The means to stave off ecological disaster from an unstable climate with much more energy in it, without utter shock, hysteria, and abdication of our North American ways of life, is to decouple economic prosperity from resource use. Crazed, desperately inventive scientists, cloistered away in parts of the world like Snowmass, Colorado, and Wuppertal, Germany, have come up with equations to help us achieve this decoupling. Double the efficiency of the resources you use, cut overall resource use in half, and then swap out 50 percent of the remainder of energy used, for renewable sources.

The Life and Death of a Superstar

Even in death, Knut arguably has the distinction of being the world’s most prominent polar bear. “It cannot be that the little Knut is completely forgotten,” said a woman who spent $5,000 on a public Knut memorial marker—one of several, in a city that teems with monuments commemorating two World Wars, the Holocaust, and the Iron Curtain. Knut’s short career at the Berlin Zoo and his “afterlife” as a taxidermy exhibit at the city’s Museum of Natural History highlight our obsession with this species and the status it has gained.

I call him Elford. He’s a diesel pickup truck, but we’ve developed quite the relationship. Elford stands seven feet tall, nineteen feet long from nose to tail, and weighs nearly eight thousand pounds with a full stomach. He doesn’t like cold mornings, but once he gets going he’ll happily roll all day long. I trimmed the corners of the front bumper to accommodate bigger tires, so he rumbles down the road with a choppy metal grin.

Fire Works—It Has for Eons

Over 10 million acres burned across the western United States in 2015. Wildfires of the year were declared as among the largest and most severe. But a look back beyond the past few decades reveals a reality that contradicts such declarations. An average of 30 million acres burned annually during the 1920s and 1930s drought years. The 1849 Yaquina Fire in Oregon burned almost half a million acres of forests, the 1910 Great Idaho set close to 3 million acres ablaze, and the famous 1988 Yellowstone fire was over 1.5 million acres in size. These are a few of many in recorded history.

Creating Language that Re-connects Us with Nature

“Language is meant to be a playful, ever-shifting creation, but we have been taught—and most of us continue to believe—that language must obediently follow precisely prescribed rules that govern clear sentence structures, specific word orders, correct spellings, and proper pronunciations,” writes naturalist and author David Lukas in his new book, Language Making Nature. Lukas’s point is both breathtakingly simple and audaciously earth-shaking: If we hope to reconnect humans with nature, he says, if we hope to infect others with our delight, awe, and whole-hearted kinship for the world outside our skin boundary, we must re-invent our language to express those feelings and experiences

Reading Henry David Thoreau, I feel a moral and spiritual kinship with him and with all of life. Of course, that was his intent in sharing his experiences at Walden Pond, on the Concord and Merrimack Rivers, in the Maine Woods, and on Cape Cod. He was the first nature journalist to “mind nature.”

Through painting, I am interested in exploring connections among human, animal, and natural worlds. The human face and flesh, animal eyes, skins, bones, and feathers speak to me, revealing life’s wonder and mystery. Inspiration for the work comes from sources ranging from ancient wisdom traditions to modern Jungian psychology and contemporary physics; timeless philosophies suggesting the interconnectedness of all life and reminding us of an instinctive orientation toward union where seeming opposites of matter and spirit, masculine and feminine, heaven and earth exist in harmony.

Doug Fogelson: The Earth as We Know It

Doug Fogelson uses photography to raise critical questions about humankind’s relationship with the natural world. For his series Creative Destruction, he takes solitary walks through wilderness preserves and landscapes tangled with plant life, taking photographs on film that he later bathes in corrosive chemicals. The process draws vivid colors and crystallized patterns out of the emulsion and also deteriorates large areas of the negatives.... Ultimately, the photographs overlay the richness and spiritual depth that can be found in the natural world with the wondrous yet often destructive effects of human synthesis, making the two inseparable.

On the Cover: On the Cover: Doug Fogelson, Ceaseless No 1 (24x24 inches). Reprinted by permission of the artist. Courtesy of Sasha Wolf.