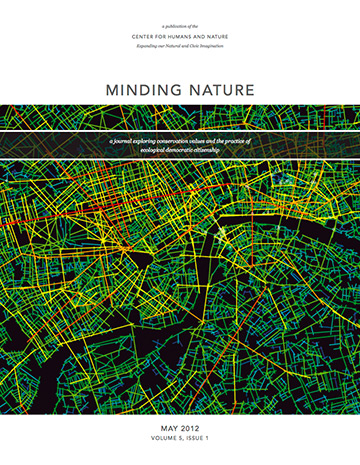 When the ideas of outstanding philosophers and novelists converge, we should pay attention. In books like Getting Back into Place and The Fate of Place, the American phi­losopher Edward Casey has written powerfully on the difference between the concept of place and the concept of space. Using a different vocabulary, the Czech novelist Milan Kundera presents essen­tially the same idea in the passage from Immortal­ity quoted by Ingrid Stefanovic at the beginning of her essay in this issue.

Embracing the Call for a New Civic Discourse

For some time now, it has been difficult to remain hopeful about the trajectory of American civic life. While our world continues to face unparalleled socio-ecological and economic challenges, our governing leaders have proved in­capable of addressing these crises in meaningful ways. In their recent book, Gardens of Democracy, Eric Liu and Nick Hanauer take on the worthwhile task of attempting to salvage a civic discourse out of this rubble of modern politics.

Introduction to the Center for Humans and Nature Manifesto

As a fly-fishing philosopher (as he often called himself), Strachan Donnelley saw an urgent need for an organization dedicated to exploring the ethical dimensions of the relationship between humans and the natural world. Strachan founded the Center in 2003, after decades of work in the bioethics field revealed that serious bio­ethics work was largely reserved for human and social issues. The roots of his vision for the Center were in his experiences as a thinking wild one, as he called all of us humans.

The Center for Humans and Nature Manifesto

This document reflects our values, our beliefs, and our intentions.  It is—in short—our manifesto . . .

Every summer, my husband and I roll back the canvas roof of our small Cit­roen 2CV and head out to explore small towns, farming communities, forests, and parkland along beautiful, picturesque rural roads that are untraveled by most Ontarians. Leaving highways behind, we meander through landscapes that open up unique visual and ol­factory experiences that enrich our days and be­come a staple in our store of happiest memories together.

There are many strategies we should pursue in re­thinking the road, not least the fundamental question whether to build a road. But my aim here is to pursue a set of approaches to transportation planning that fo­cus on retaining, reclaiming, and re-establishing con­nectivity. We can and we should reconcile our notion of mobility such that we (re)imagine the road as a de­vice for (re)connection between humans and wildlife, culture and nature.

Bringing People Together or Keeping Them Apart: The Spatial Configuration of Roads and Other Pathways

One of the most significant dimensions of roads and other pathways was not well understood until the early 1980s when British architectural thinker Bill Hillier developed a theory called space syntax.  Hillier argued that the particular spatial arrangement of pathways—whether roads, streets, sidewalks, or building corridors—plays a major role in whether those pathways are well used and animated or empty and lifeless.  His work demonstrated convincing . . .

Few things capture the romantic imagination like the great cities of the world. In New York, I find my­self transported on a stroll through Central Park by the tune of a saxophone. This is what it means to be a New Yorker, I think to myself with pride, as I sit down on the Great Lawn with my Sunday crossword. But the imagination—a lovely device at times—can obscure truth.