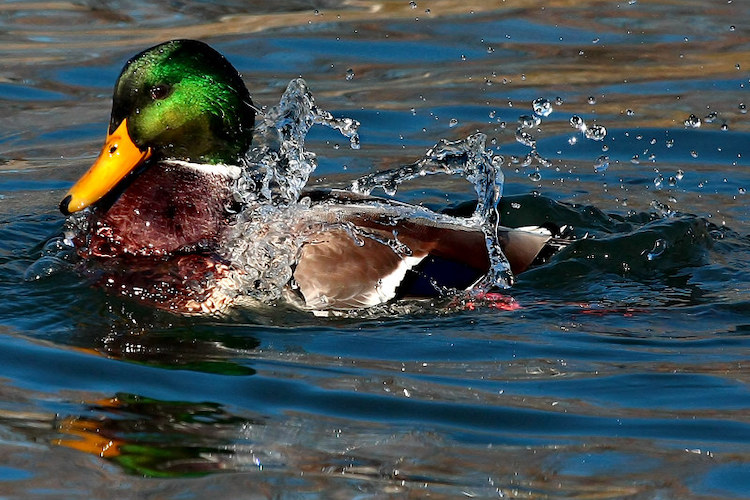 Lately, I’ve been on the lookout for resiliency role models. I’m trying to steer clear of celebrities and Instagram influencers, looking instead for inspiration in authenticity rather than filtered augmentation. Then serendipity did me a solid as I walked through my local city park last week, past the central water feature, where I saw the shining, shimmering examples I needed—mallard ducks (Anas platyrhynchos) and ducklings, bobbing like corks on the wind-whipped surface.

LIKE WATER OFF A DUCK’S BACK — That tried and true adaptability adage is an apt observation for just about any species of waterfowl, thanks to their liquid-resistant outer contour feathers, but in the case of mallards it’s also metaphorically germane... because this is one plucky duck. I won’t go so far as to say mallards are unsinkable but they are definitely buoyant. I mean that literally, of course, but figuratively, too. 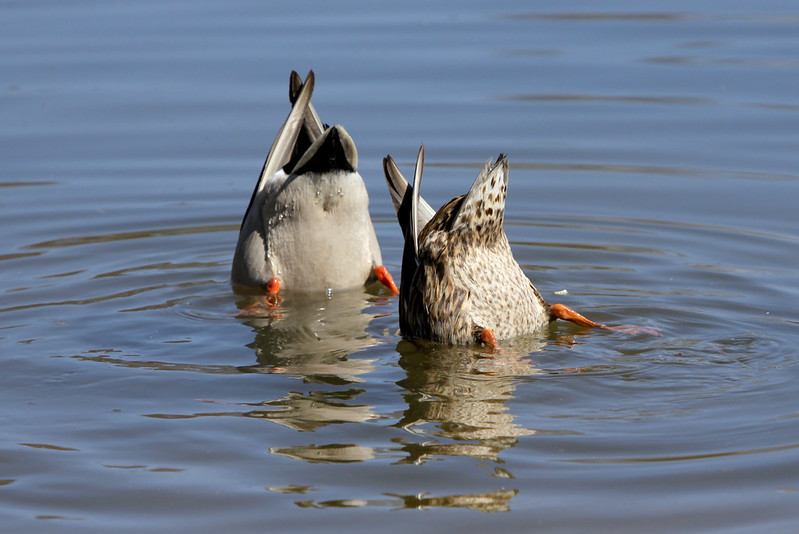 FAMOUSLY FAMOUS — Instantly recognizable and as visually splashy as Billie Eilish, male mallards share the pop star’s penchant for verdant coiffure, rocking an iridescent emerald head set off from the body's neutral grays, browns, and black by a bright white choker and an incandescent gold-plated bill. Female and adolescent mallards are sartorially muted and mottled but the blingy amethyst epaulet worn on the wings of both sexes prevents any member of this clan from being tagged as a shrinking violet. 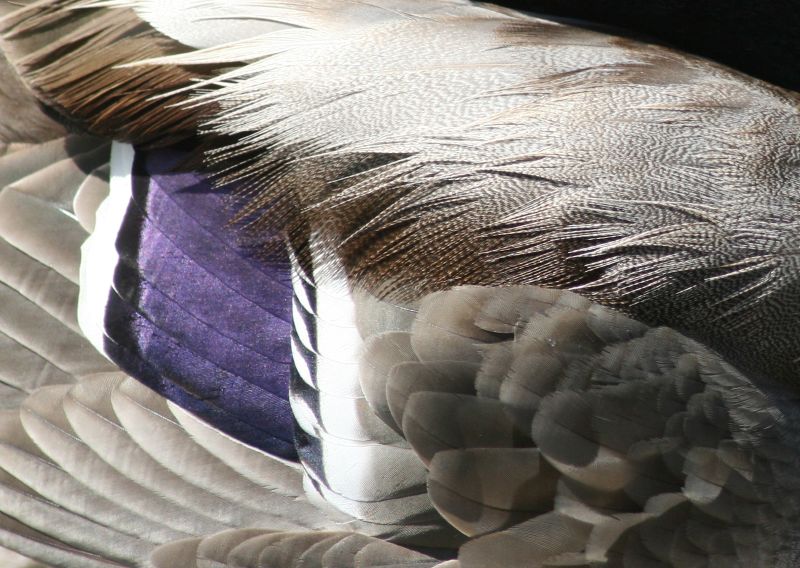 JUST ADD WATER — Mallards need H2O to feel at home but beyond that one requirement they’re an undemanding tenant. Permanent or ephemeral, any aqueous feature will do—rivers and streams, ponds and potholes, marshes and croplands, ditches and puddles—but I don’t mean to suggest they’ll pass on something more sumptuous. Case in point: another day, another stroll, this time traveling through the neighborhood alleys for a peek at backyard flower gardens. I heard a rapid flap of wings overhead, then watched a mallard Mr. and Mrs. splash down like jet setters into a private oasis (aka swimming pool). This duck can and does go with the flow, equally happy to live off the grid or as a city slicker, in any country, any hemisphere.

ANYWHERE YOU HANG YOUR HAT — Mitochondrial DNA suggests the species originated in or near Siberia; nonetheless, the mallard is a now a genuine citizen of the world. They’ve fanned out and established persistent breeding populations throughout Eurasia, northern Africa, and North America, aided by the fact that mallards get on swimmingly with people who have aided and abetted their quest for worldwide waterfowl dominance. Motivated less by altruism than by the desire of strangers in a strange land to feel at home, human migrants transported wild mallards to South America, South Africa, Australia, and New Zealand. In turn, as the founder stock for almost every breed of domestic duck (muscovies are the exception), mallards have been invaluable to human domination aspirations, too. As a result of all this bridge building, mallards are the antithesis of a rare bird. 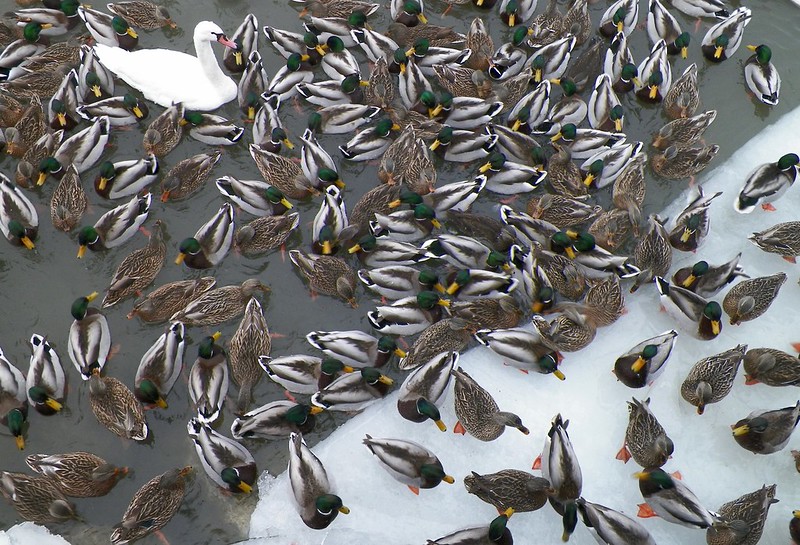 AIN’T TOO PROUD TO BEG — At mealtime, mallards are equally willing to accept a handout or fend for themselves. They’re flexibly omnivorous, so finding something palatable is as easy as duck soup... oops! Sorry, sorry! Make that easy as pie... no, no, forget that... ducks don’t eat pie (and pie isn’t all that easy to make either). Let’s just say this duck is a dabbler who’ll eat plants and some animals. During breeding season, mallards prefer a bouillabaisse of snails, freshwater shrimp, insect larvae, and other aquatic invertebrates combined with a mirapoux of roots and tubers, shifting to calorie-rich comfort foods like grains and seeds as temperatures drop, especially those who toggle between summer and winter homes.

LOVE THE ONE YOU’RE WITH — Mallards are serial monogamists... if by monogamy you mean a faithful-unless-other-opportunities-arise, 6-to-7-month liaison that begins in autumn and ends in spring. Once the female begins preparing a nursery for the baker’s dozen of shorties who may show up after these pairings, the male heads off to hang out with his bros. She makes way for ducklings; he'll be at the local watering hole with other menfolk, discoursing at length about sports, watching for a chance to hookup with childless females in need of a baby daddy, and waiting on delivery of his new bespoke breeding plumage following an early summer molt.

Emblematic of the mallard’s broad-minded nature, acceptable matches are not limited to intraspecies suitors. Mallards will happily hybridize with American black ducks (Anas rubripes), Hawaiian koloas (Anas wyvilliana), mottled ducks (Anas fulvigula), pintails (Anas acuta), and various teals (e.g., A. carolinensis, A. cyanoptera ); they’re open to dating outside their genus, including canvasbacks (Aythya valisineria), gadwalls (Mareca strepera), and wood ducks (Aix sponsa); and they won’t discriminate against a domesticated breed dumped at the park pond by someone who wanted a pet duckling but not a pet duck. 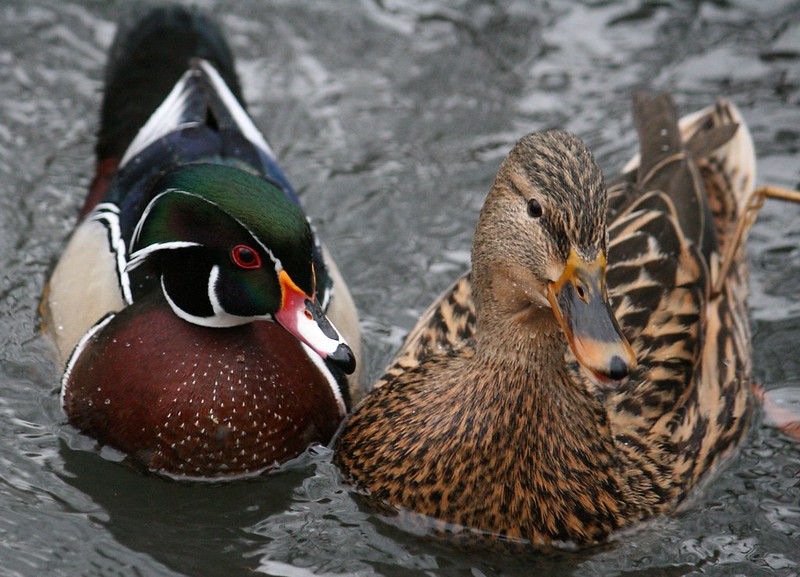 LET’S GET OUR DUCKS IN A ROW — Mallards are always willing to size up a situation and adjust accordingly. For example, in places where duck hunting is a common occurrence mallards are extremely wary of people, and understandably so. In urban settings, however, where people are more likely to be packing stale bread than shotguns, mallards become quite tame. So unconcerned with human neighbors in close proximity, actually, that hens willingly trade their traditional nest of a shallow scoop in moist soil near water for boat docks, balconies, and rooftop gardens. With so many folks using my local park as a way to achieve both social connection and physical distancing these days, foot traffic near the lake is at an all-time high. In response, female mallards looking for a place to nest are getting creative. I saw one hen balanced on the narrow natural shelf of a slope steep enough for an impromptu egg roll; another gal who scooched under a row of shrubbery; and one mom-to-be who gave up all pretense of privacy and claimed a spot in the middle of a now-vacant playing field. True to their resilient nature, the absence of waterfront property is not a deal breaker.

In short, the secret of mallard success seems to be a winning combination of luck and happy-go-lucky, with some clear-eyed pragmatism thrown in for good measure. 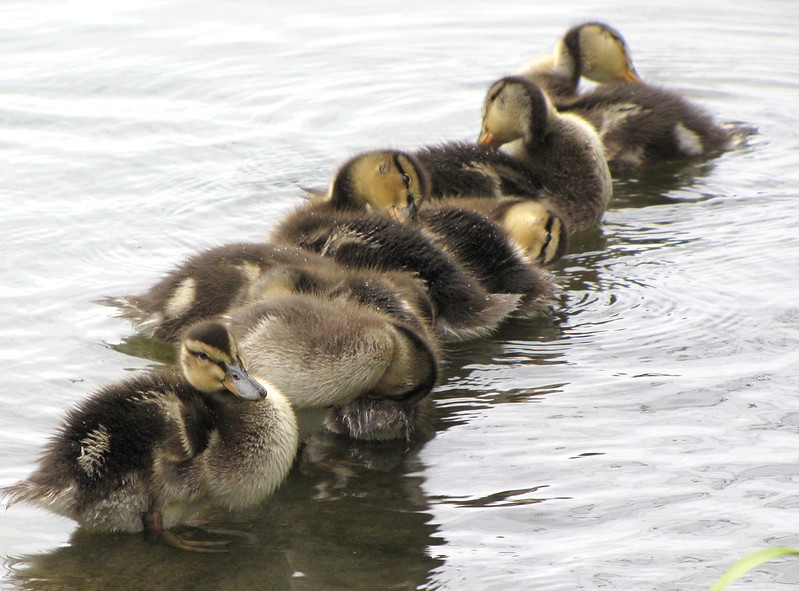