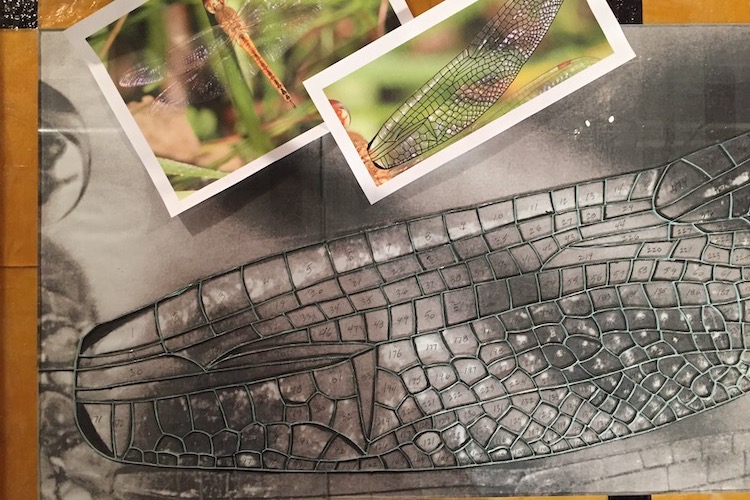 Several years ago, in “Lux, Lumen, Illumination,” I’d written, “As best as historians can guess, the making of stained glass may have been inspired by the art of cloisonné—using strips of gold to hold together pieces of glass in artful patterns. Technically, perhaps. But inspirationally, my money is on dragonflies.”

Later in the piece, telling the story of a dragonfly that had landed on my chest, I observed no mere insect, but rather, “the glasswork at Chartres, Strasbourg, and Saint-Denis. The inspiration for the next hand-crafted piece for my home.” 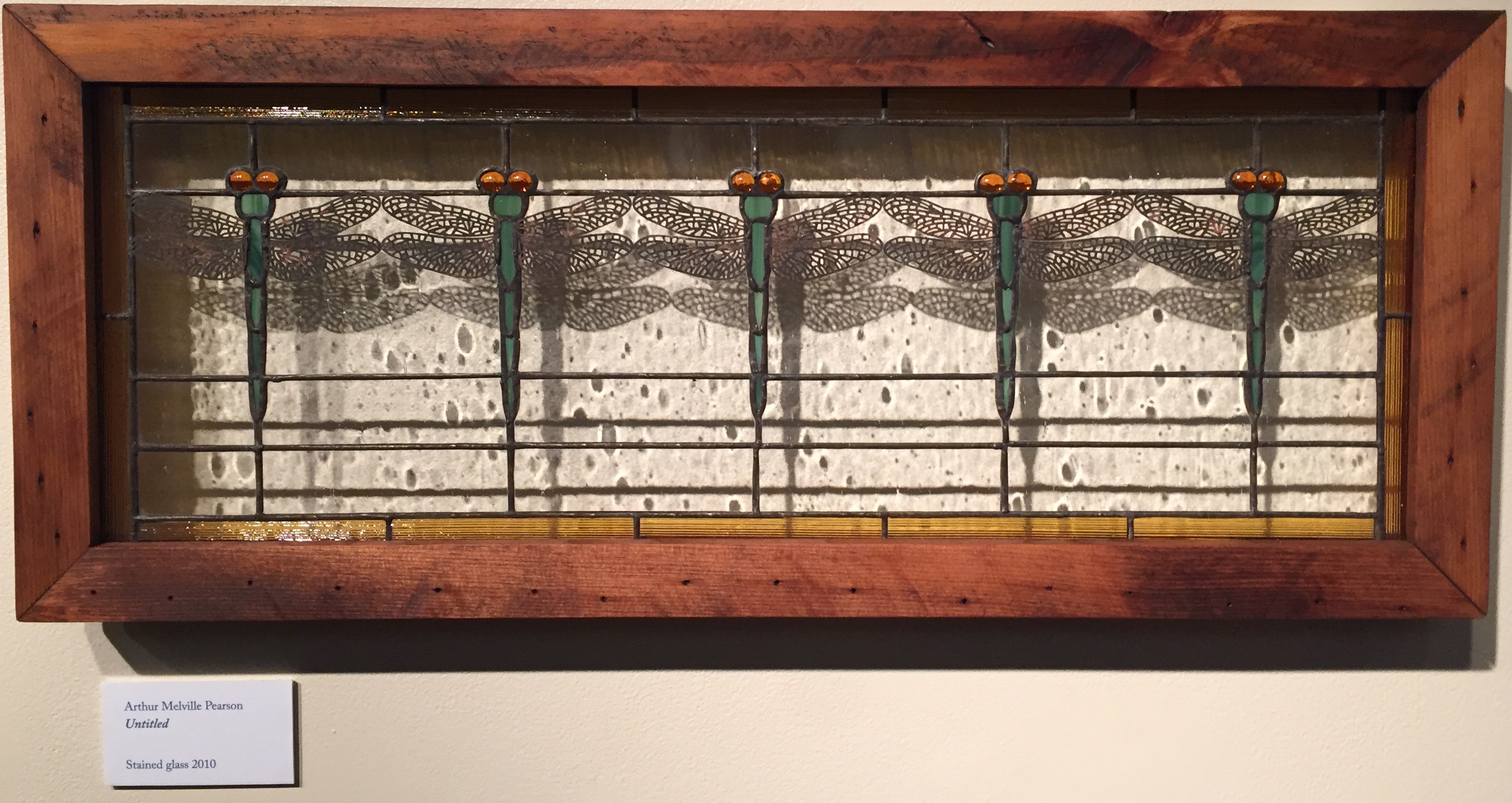 At the time I wrote this, I didn’t know exactly what my next stained glass piece would be. Up to that point, I’d made dozens of original works, all inspired by nature. Several feature dragonflies—including a transom window featured in City Creatures (published by the University of Chicago Press), and in the accompanying exhibition at the Peggy Notebaert Nature Museum. My dragonfly transom, along with my other dragonfly works, incorporated the stylized dragonfly design pioneered by Louis Comfort Tiffany. Gracing some of his most famous lampshades, they consist of pairs of glass bead eyes, segmented bodies, and twin pairs of copper wings. 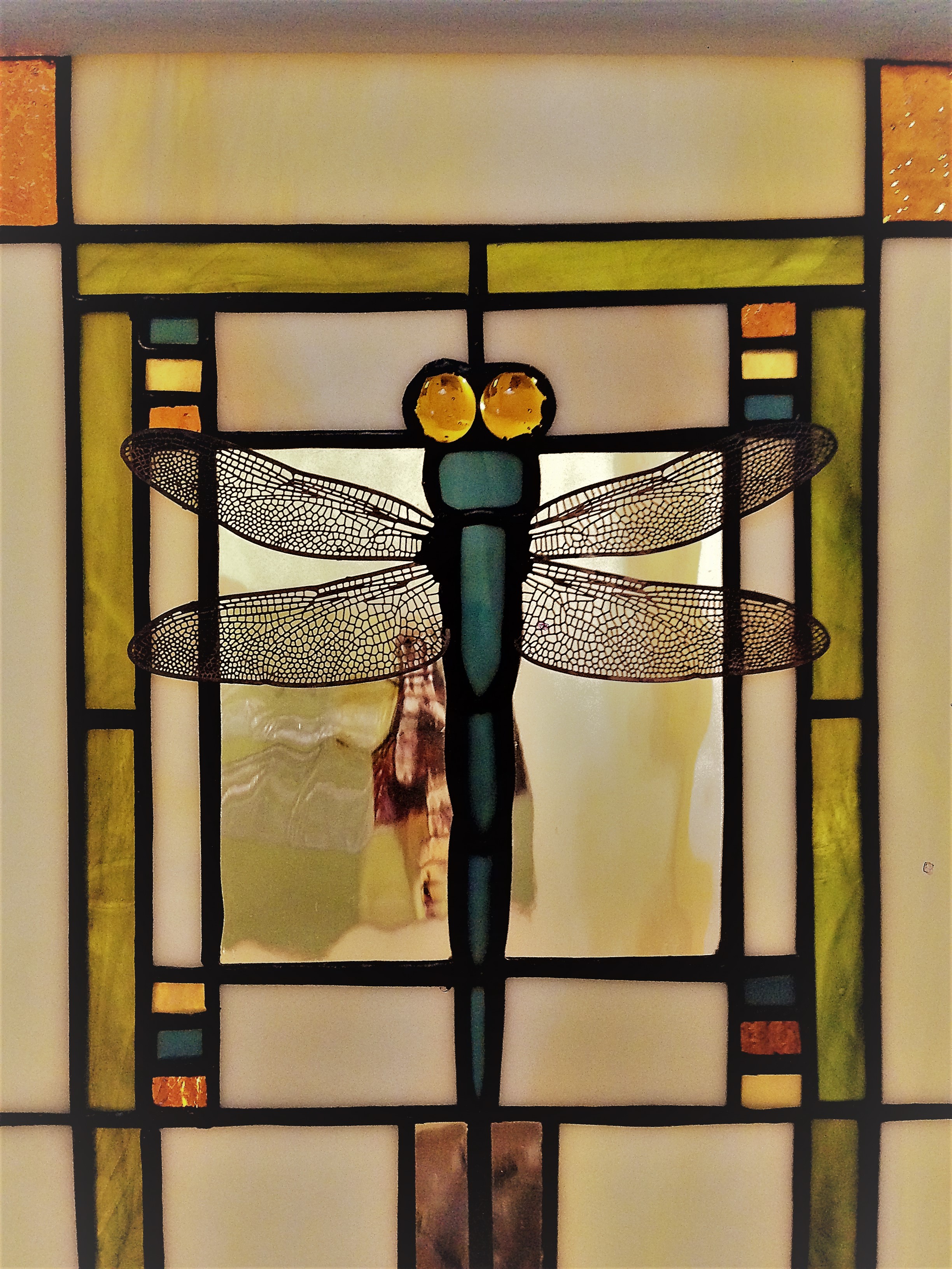 Although I strove to make Tiffany’s design my own, there came a time when borrowing, imitating, appropriating, whatever you want to call it, no longer worked. This held especially true about the wings—identical, machine stamped, and available through any stained glass shop.

Real dragonflies vary in size, with wingspans ranging from two to five inches. The color pattern on wings is a sure way to identify many dragonfly species. But it’s the venation in the wings I find most intriguing, most suggestive of stained glass. To quote myself one final time, “The veins of each dragonfly wing are clearly cames [lead lines] enclosing an artful pattern of clear and colored membranes that are translucent one moment, shimmery the next, and a glimpse of some great cathedral window the next.”

For years, I’d been thinking of dragonflies as stained glass master works on the wing, perceiving their wings as cathedral windows in miniature. On every nature walk, with every dragonfly I encountered and photographed, I wondered, I imagined, I doubted, I planned. 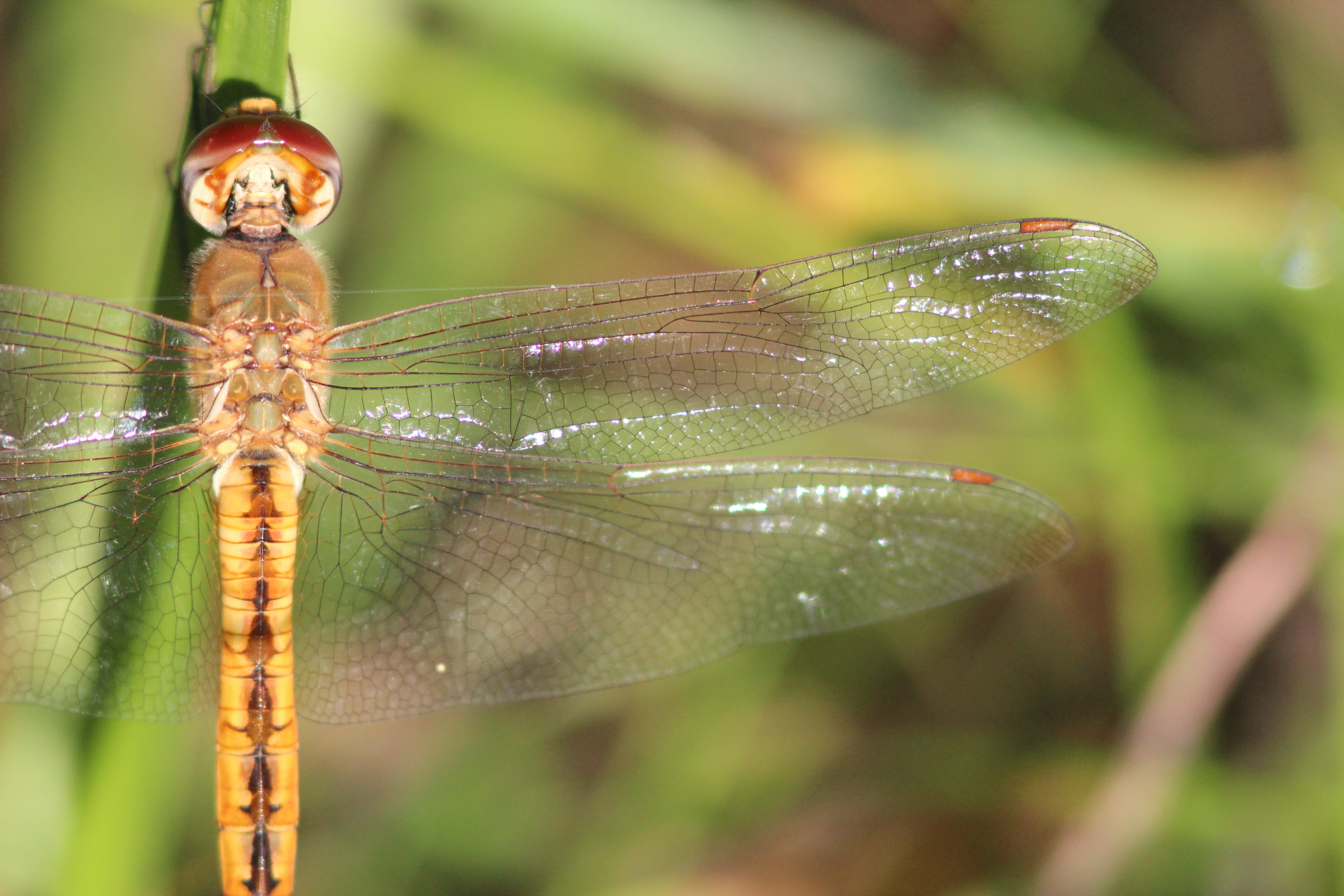 Late last fall, as winter approached, I decided. I rifled through hundreds, thousands, of my dragonfly photos. I selected one. A wandering glider, Pantala flavescens. I began enlarging the image on a large format printer, bit by bit, each time outlining the wing pattern in thin lines of black ink to keep the detail crisp. Eventually, a 1.3-inch forewing grew three thousand percent to nearly four feet in length.

At this scale, a dragonfly wing reveals many wonders. For instance, take a guess how many cells there are in a single wing. 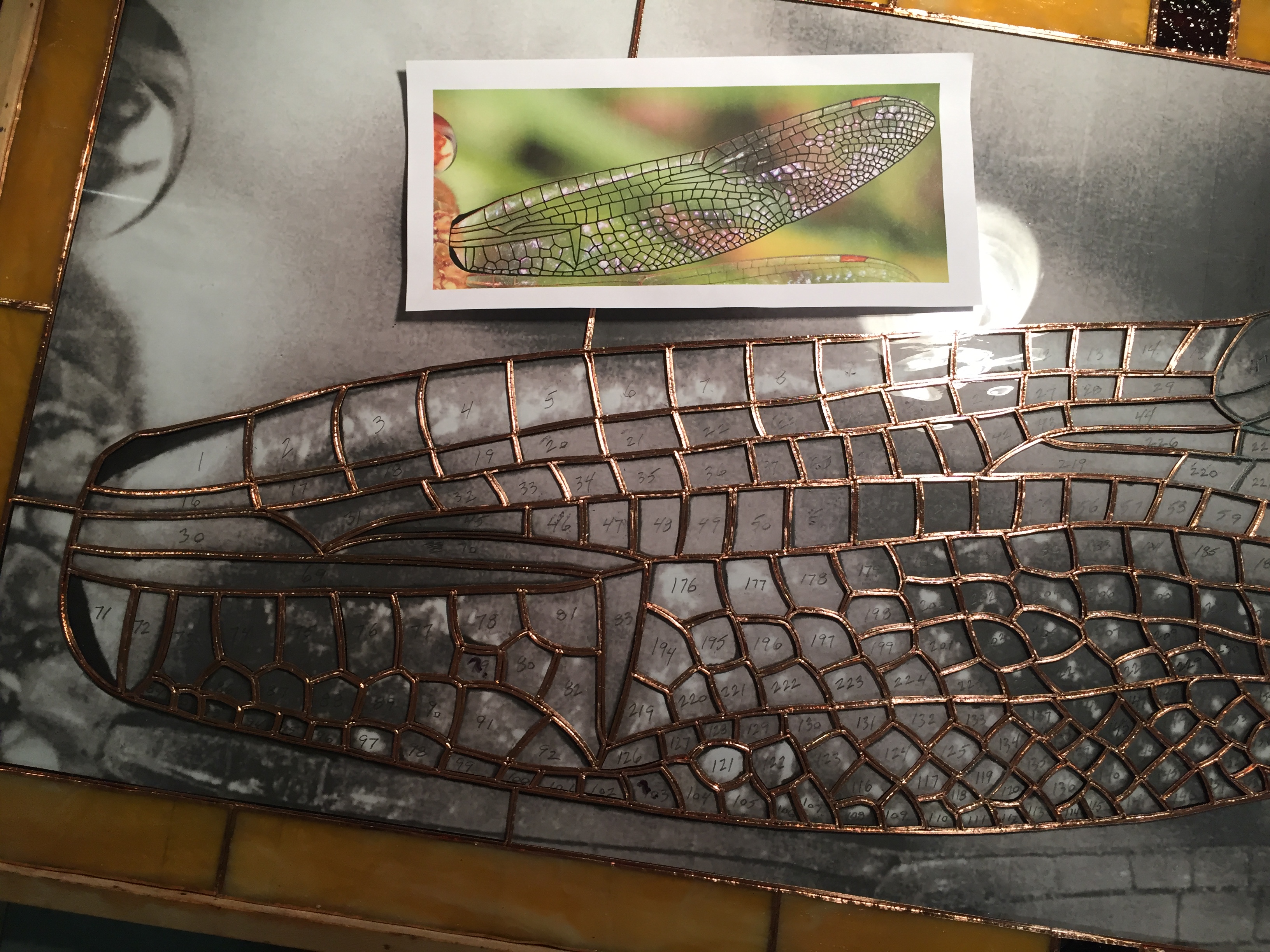 Yes, I counted because I needed to number each cell for the design pattern. Furthermore, each cell is uniquely shaped—some are long and narrow, some are squarish, most are various kinds of polygons. Together, they form an intricate lacework, through which runs a recurring leitmotiv of long, elegant lines. Thus enlarged, a dragonfly wing is—as I’d imagined and hoped—the perfect template for a stained glass window fit for any cathedral in the world.

One of the questions I get most often is how long does it take to make stained glass—especially one with so many pieces?

Including design, build, frame and install, well northward of a hundred hours.

For me, however, the joy—the Zen—of making stained glass is losing track of time. Losing myself in the feel of the glass. The cutting, the grinding. Losing myself in the Brahms and Mozart and Copeland and Vaughn-Williams and Gregorian chant that fill my basement workshop, that flow through my fingertips and infuse each piece of glass I shape into place, revealing—piece by piece by piece—the line, the rhythm, the perfect harmony that is a dragonfly wing.

When my fingers need a break from the glass shards and the diamond-encrusted grinding wheel, I lose myself in reading about dragonflies. The earliest known dragonfly fossils date back 325 million years—nearly 100 million years before dinosaurs appeared. Among the first insects to evolve wings, some early dragonflies had wingspans measuring 30 inches. Much smaller today, modern dragonflies are aeronautical marvels. They can hover, turn on a dime, fly straight up and down, they can reach top speeds of 60 mph. According to some studies, they have a 95% success rate in capturing prey, which they ingest only when flying. All of which are among the reasons they have been studied intensively by engineers from the private sector, NASA, and the Department of Defense.

What I most enjoy reading about is what my hands have intuited by shaping the glass—that the myriad cells in a dragonfly wing have specific names, characteristics, and functions. The arculus. The nodus. And my favorite, the pterostigma—the colored cell near the tip of the wing that stabilizes the wing, in much the same way a plastic clip stabilizes the wing on a balsawood toy airplane (for those of us old enough to have played with them).

Back in the basement workshop, once all the glass pieces are shaped and in place, it’s time to line each one with copper foil. This step is about refinement—keeping the massive puzzle tightly fit. It’s about making however many micro grinds are necessary to accommodate the copper foil, which measures .0001 in thickness. 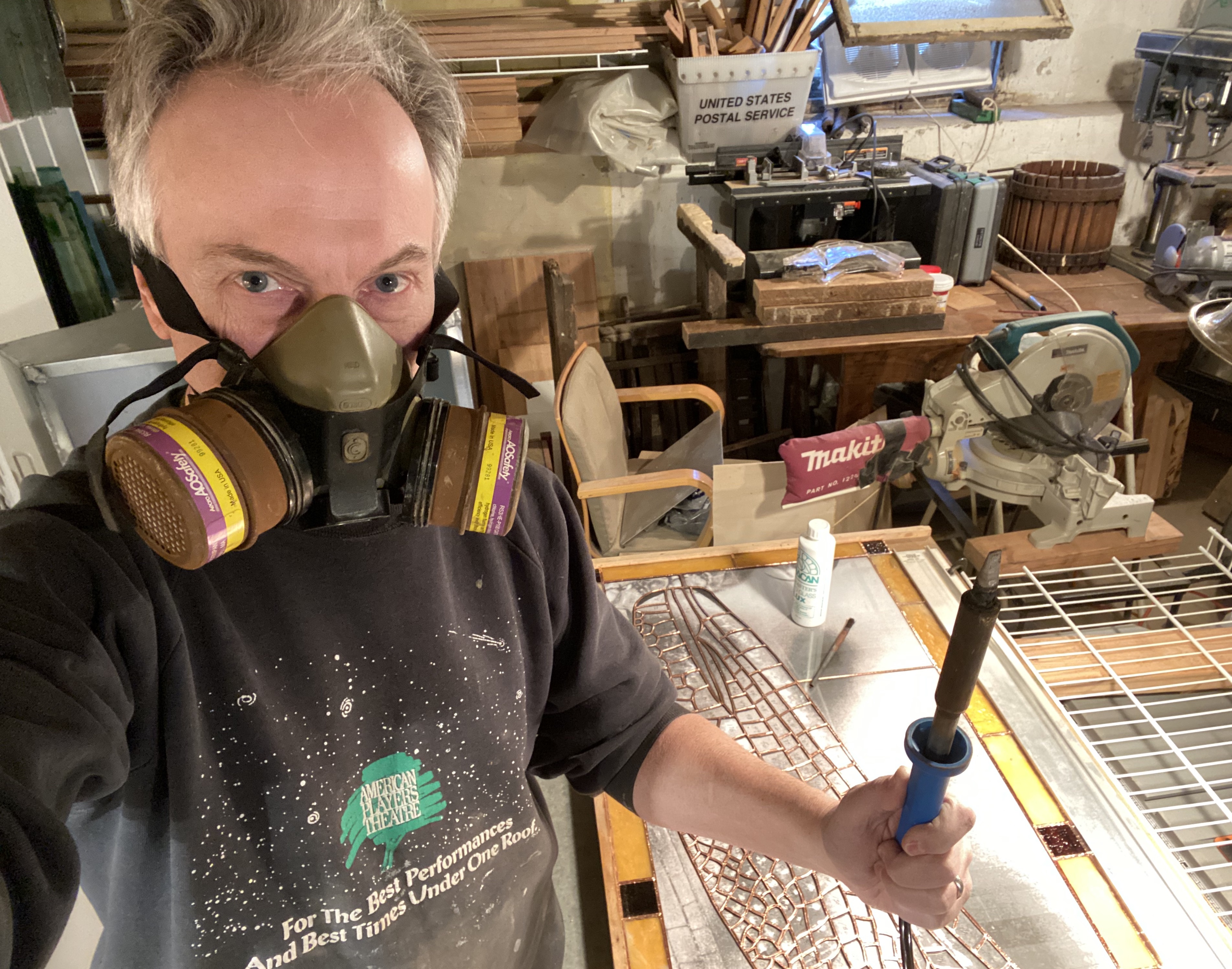 Once all the glass pieces are foiled, it’s time to join the copper seams with solder. In a way, this step is akin to a dragonfly unfurling its wings for the first time. Most dragonflies spend the majority of their lives as larvae, living underwater, undergoing three stages of metamorphosis. For the fourth stage, the emergence into an adult, the dragonfly larva emerges from the water. It splits its larval skin. The abdomen emerges. The legs harden. The wings unfurl as they fill with hemolymph—dragonfly blood. Once the wings assume their full shape and position, the blood draws back into the body, leaving the wings to dry—light, flexible, and strong. My version of dragonfly blood is solder, comprised of 60% tin and 40% lead. With a grozing iron heated to a temperature of 370 degrees Fahrenheit, the solder liquifies, allowing me to lay down a smooth bead along every line of the wing. The solder quickly cools. Lead is not light, but it’s both strong enough to hold everything together and soft enough to provide a little flex. 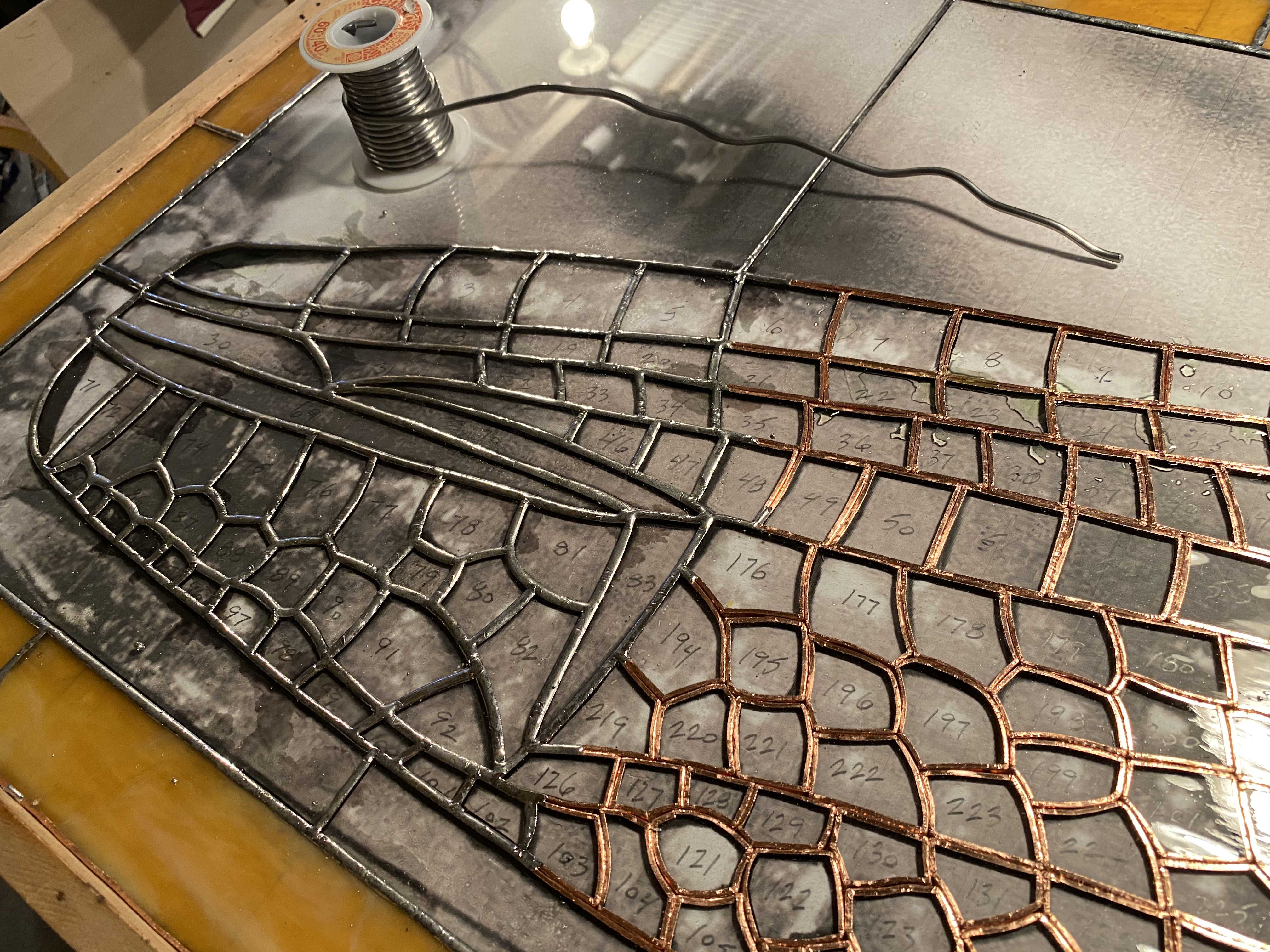 Once dragonflies fully emerge into the adult stage, it takes about an hour to rest and let everything dry before they attempt their first flight. During this final transition time, dragonflies are at their most vulnerable—to hungry birds, ants, and spiders. So, too, is the final transition time of my stained glass dragonfly wing fraught with risk—of the dreaded crack. As carefully as possible, I wash and rinse the entire piece of its solder flux, apply a patina that turns the solder from dull grey to accenting black, then wash and rinse the entire piece again before fitting it into a frame made of old-growth pine salvaged from a rehab project in my historic Pullman rowhouse. The final step, when the wing finally takes flight, is installing the finished work securely in our home. 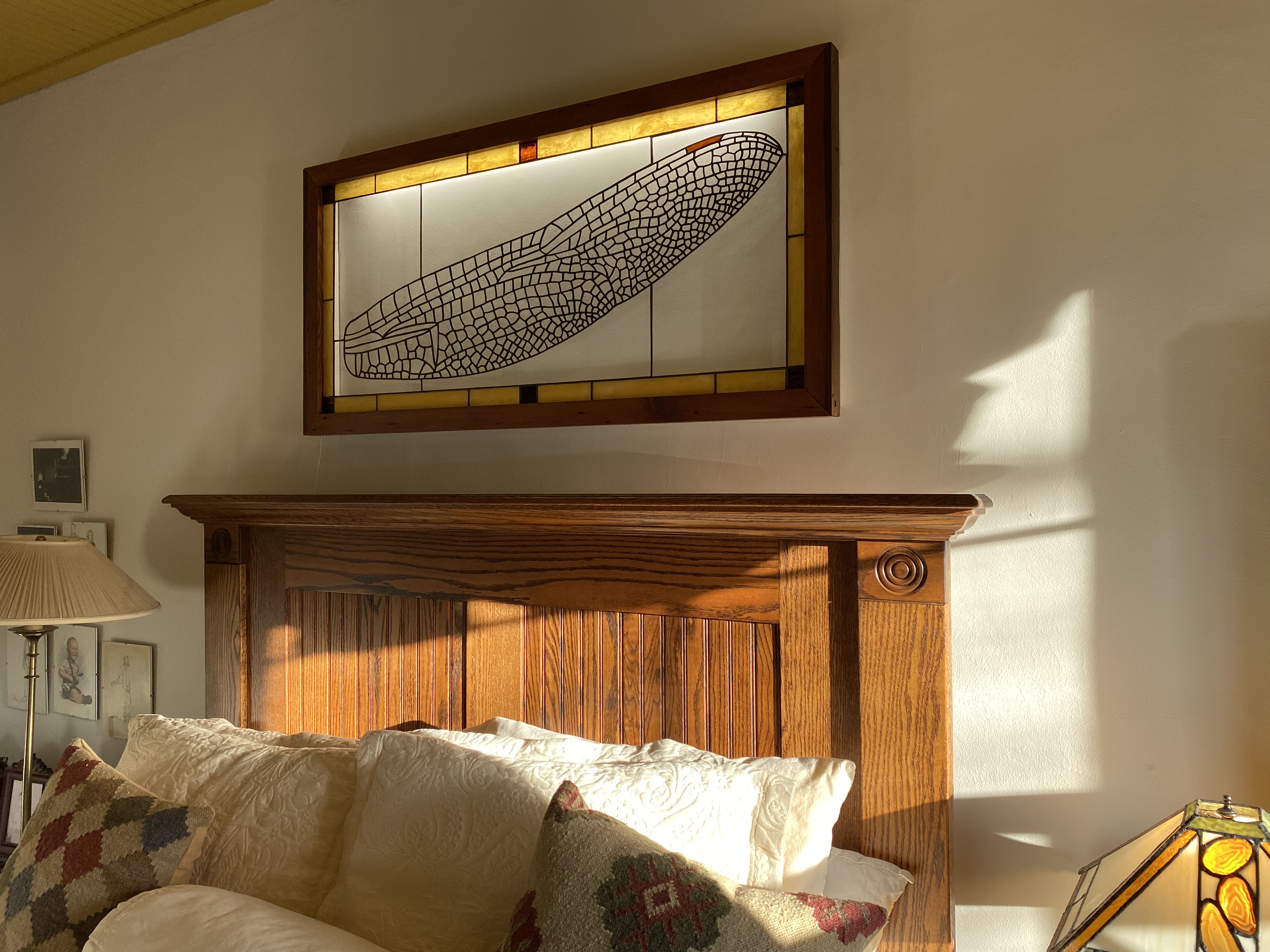 As I shared in “Lux, Lumen, Illumination,” these are terms coined by Albert Suger, the twelfth-century abbot and father of Gothic art and architecture, to describe the transformative power of stained glass. Lux is natural light that turns into lumen as it passes through stained glass, which turns into illumination as it enters your eye, your mind, your heart, your soul.

As I’ve come to understand more keenly with this latest stained glass project, illumination also enters through the hands. It seeps into muscle and bone. It sharpens every sense. It spurs you back into the field. The wetland. The prairie. Praying for another miracle—for another dragonfly to alight on your chest. For another calling. The inspiration for the next cathedral window.