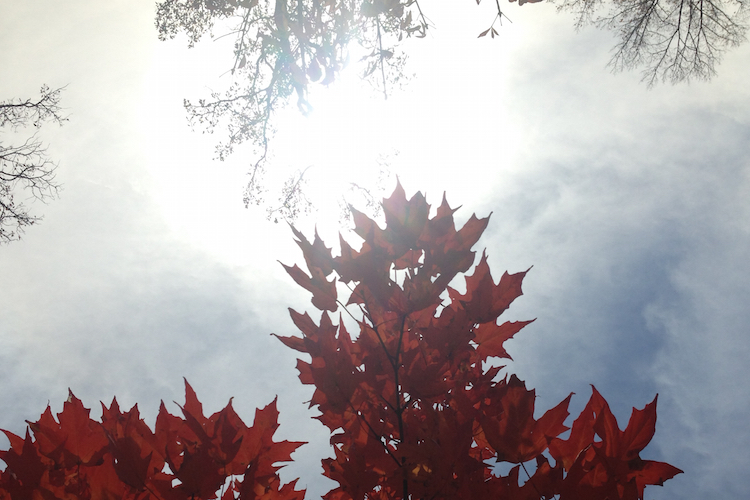 “The King is dead. Long live the King.” This proclamation caused me great bewilderment as a child. How can a deceased king live long? Not until I was older did I realize that the phrase refers to succession. The previous king was dead; his successor was being wished a long life. However, I didn’t truly appreciate this expression’s meaning until succession—one plant community replacing another—began transforming my yard.

Nature invented succession. Before kings or even people existed, for as long as living things have floated, crept, and slunk on the Earth, their actions—in concert with atmospheric, geologic, and other forces—have transformed environments on our planet, one into another.

The concept of ecological succession came to prominence through studies done by Henry Chandler Cowles at the Indiana Dunes along Lake Michigan. While visiting the Indiana Dunes, I’ve noticed most people hanging out on the sandy beaches and the dunes that are nearest the water. Many don’t visit the back dunes, which are progressively covered with grass, shrubs, and trees. Cowles observed that the vegetation changed with increasing distance from the water, noting that the dunes were colonized in a predictable way. Those farther from the beach represented more advanced stages of succession. 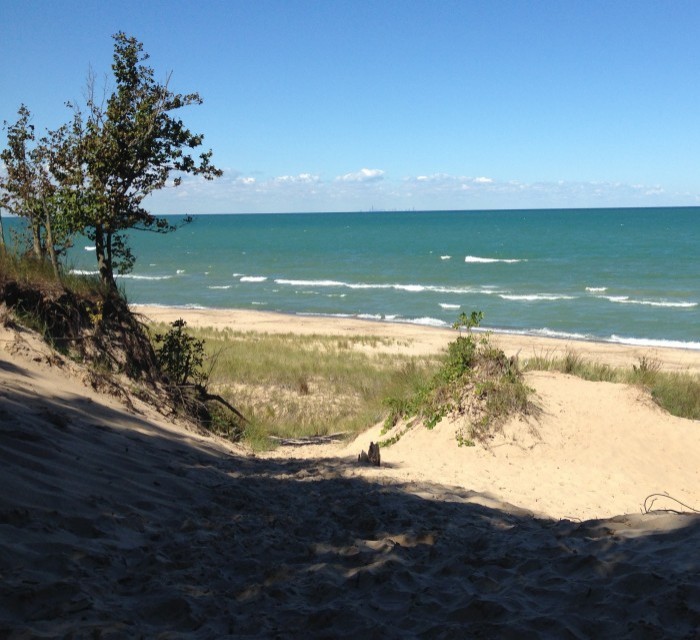 The Indiana Dunes illustrate primary ecological succession, in which newly created habitat gradually transforms into another type of community. In the case of dunes, deposits of sand near the shore become terra firma, as grasses, trees, and other life forms establish themselves.

Ecological succession of another type has been at work in my yard over the past year. The succession is not primary, like the dunes, but secondary, in which a major disturbance sets the stage for other species to settle. In my yard, the disturbance was created by the loss of a large silver maple tree (described in a previous City Creatures post).

Trees come down with regularity in forests, leaving openings in which secondary succession operates. However, our maple tree wasn’t one among many trees; it was the only one behind our house, with a canopy that spread over most of the backyard.

The loss of the tree was painful. The old king was dead and gone; I mourned him greatly and looked with trepidation on the rise of new leadership. The shaded, sheltered kingdom that I loved became an exposed land of glaring sunlight. In the blink of an eye, the inhabitants of and frequent visitors to our yard, myself included, faced a new world.

A second summer without the tree has come and gone, giving me time to observe and reflect on changes in its absence. Without the tree’s refuge, some creatures are simply gone. Many of the missing are birds. The tree’s spreading branches provided places for birds to rest, while its bark concealed insect prey. Their absences are palpable.

Gone, too, are the large carpenter ants whose tireless excavations contributed to the tree’s demise. From time to time, I see a lone ant crawling along the old tree’s stump. But when the tree came down, so did the colony the ants had toiled to create. I’m torn between missing them and hoping that they’ve relocated far from our home's wooden innards. 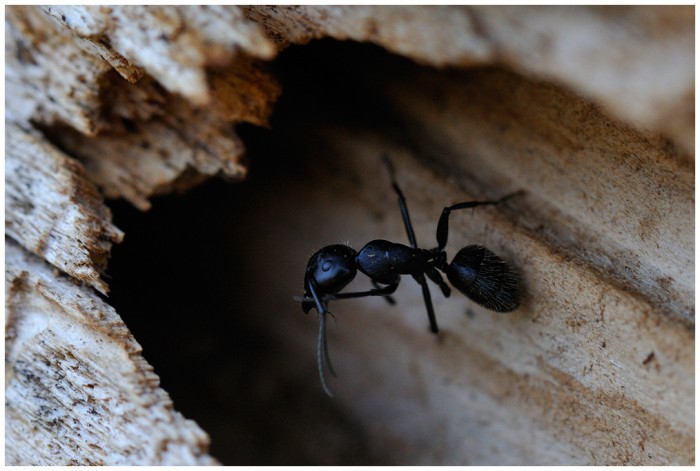 Some former inhabitants remain. As a whole, though, the community’s populace is transforming. While inky cap mushrooms still sprout at the base of the remaining trunk, a more diverse set of fungal residents has joined in. Some climb the trunk like the rungs of a ladder. 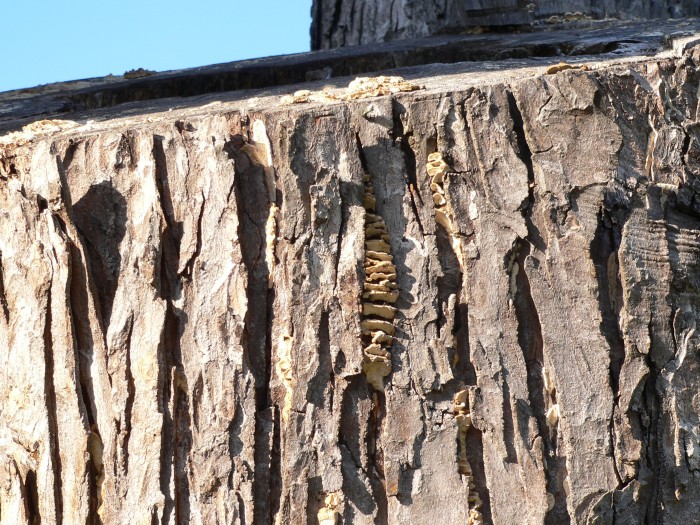 Grey squirrels no longer raise young in the large tree hole. A few male squirrels sheltered there last winter, however, using the hole like a wood-paneled bachelor pad. 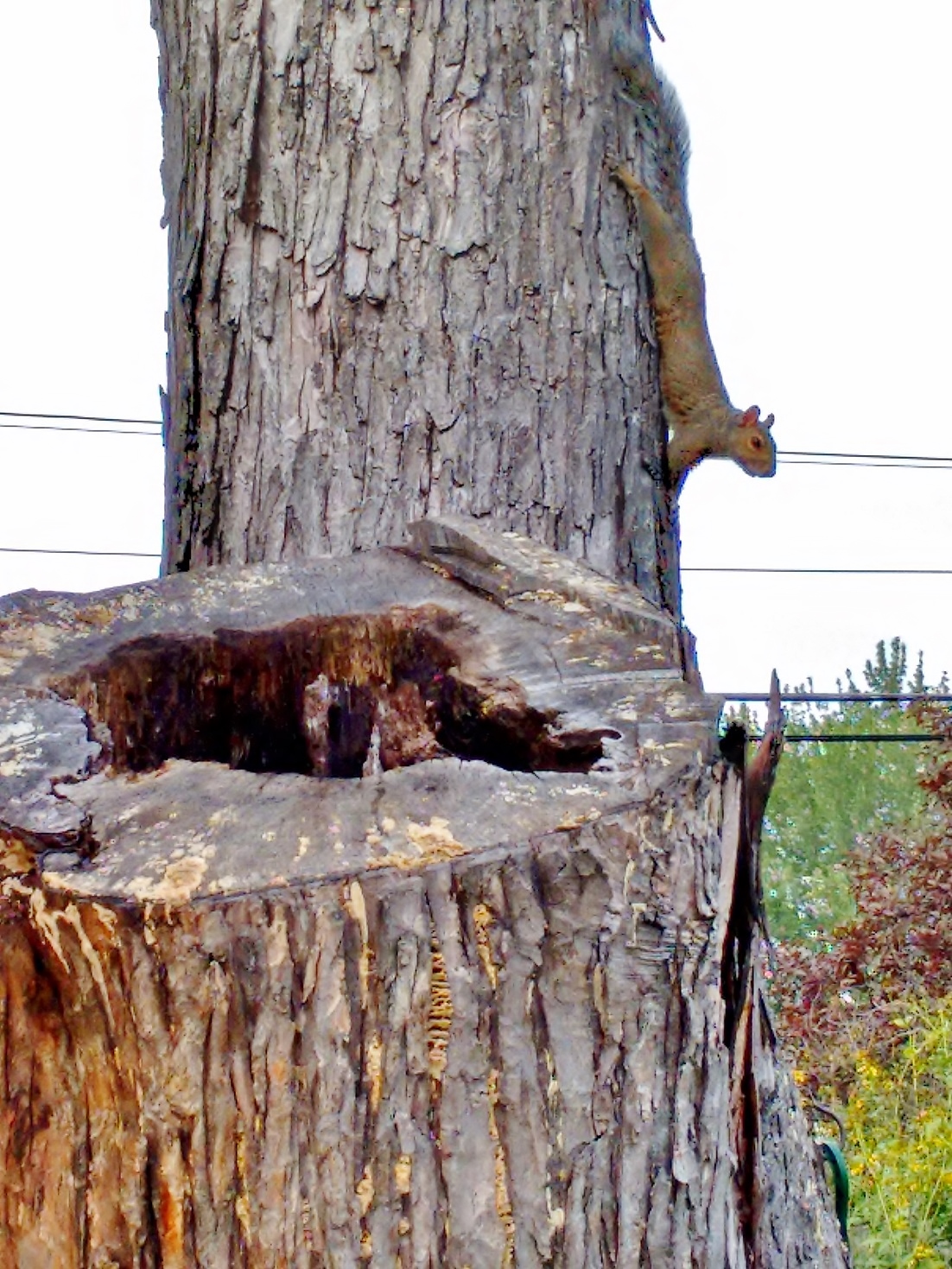 With the tree’s decay, the cavity has enlarged, allowing wind and rain to penetrate the once-protected interior. I’ve seen a squirrel or two explore the tree hole recently, but there’s no evidence that they have become residents. Will any squirrels find shelter there this winter?

I feel exposed in the tree-less environment, and the abundance of sun has generated mixed results—some pleasing, some not. Shade-dependent plants, including ferns and columbines, seem to be declining, overgrown by other plant species. But my perennial garden, which always struggled under the dappled shade of the tree, has flourished, displaying a riot of colors rivaling the uniforms of the Swiss Guard. Like citizens crowding the town square, lavender tufts of wild bergamot stand shoulder-to-shoulder with bright purple coneflowers. Giving the impression of sentinels, pink clusters of milkweed flowers and bright yellow sunflowers rise above all. 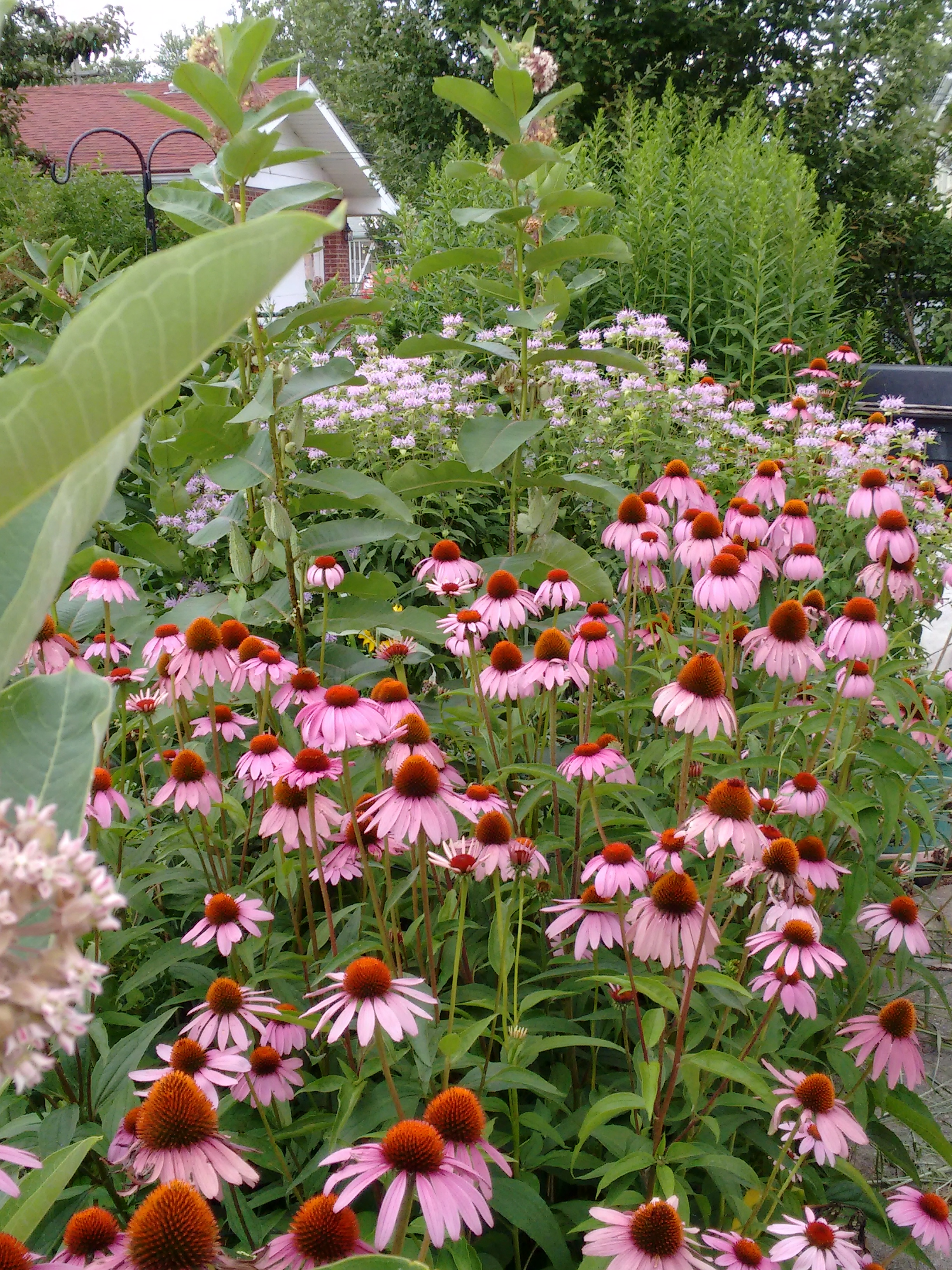 We may have fewer birds without the tree, but the land has become a pollinator paradise, wrapped in the quiet hum of buzzing bees and ornamented by butterflies flitting among flowers. Occasionally a butterfly alights on me; I’m honored to be regarded as part of the community.

Perhaps nothing heralds the surge of sun-loving species as much as the eye-catching purple of New England Asters, which have been particularly successful under the new reign. For several years, one large New England Aster inhabited a corner of the garden not shaded by the maple. Now that the yard is bathed in sun, several of its offspring are taking hold in other sites, spreading regal purple throughout the kingdom. I’m happy with these new neighbors and where they have chosen to settle. 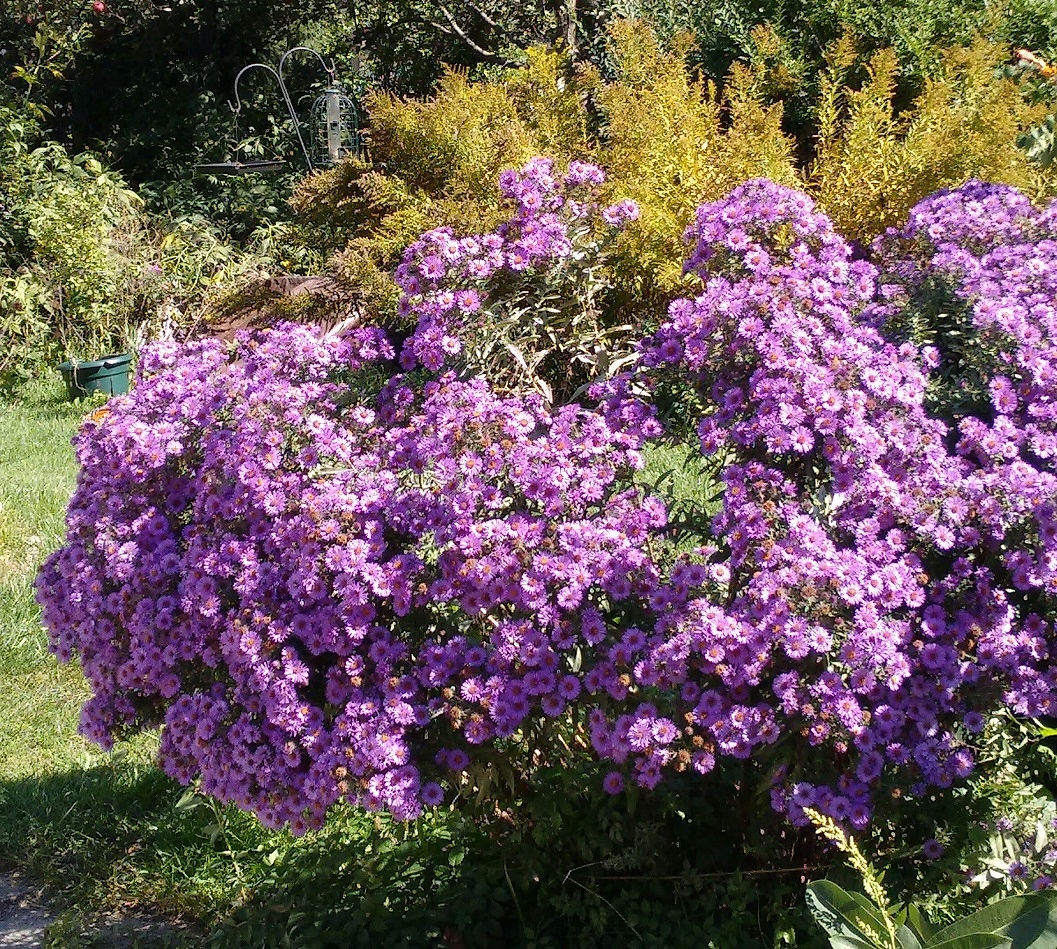 As with the ascendancy of the asters, most succession in the yard is taking place naturally. But some changes are human-assisted (me being the human). I’ve intervened in an attempted coup by the trumpet vine. This year, the main vine sent many-leafed tendrils snaking everywhere and scores of new sprouts wended their way throughout the garden. I’ve removed many of them, but haven’t kept up well. 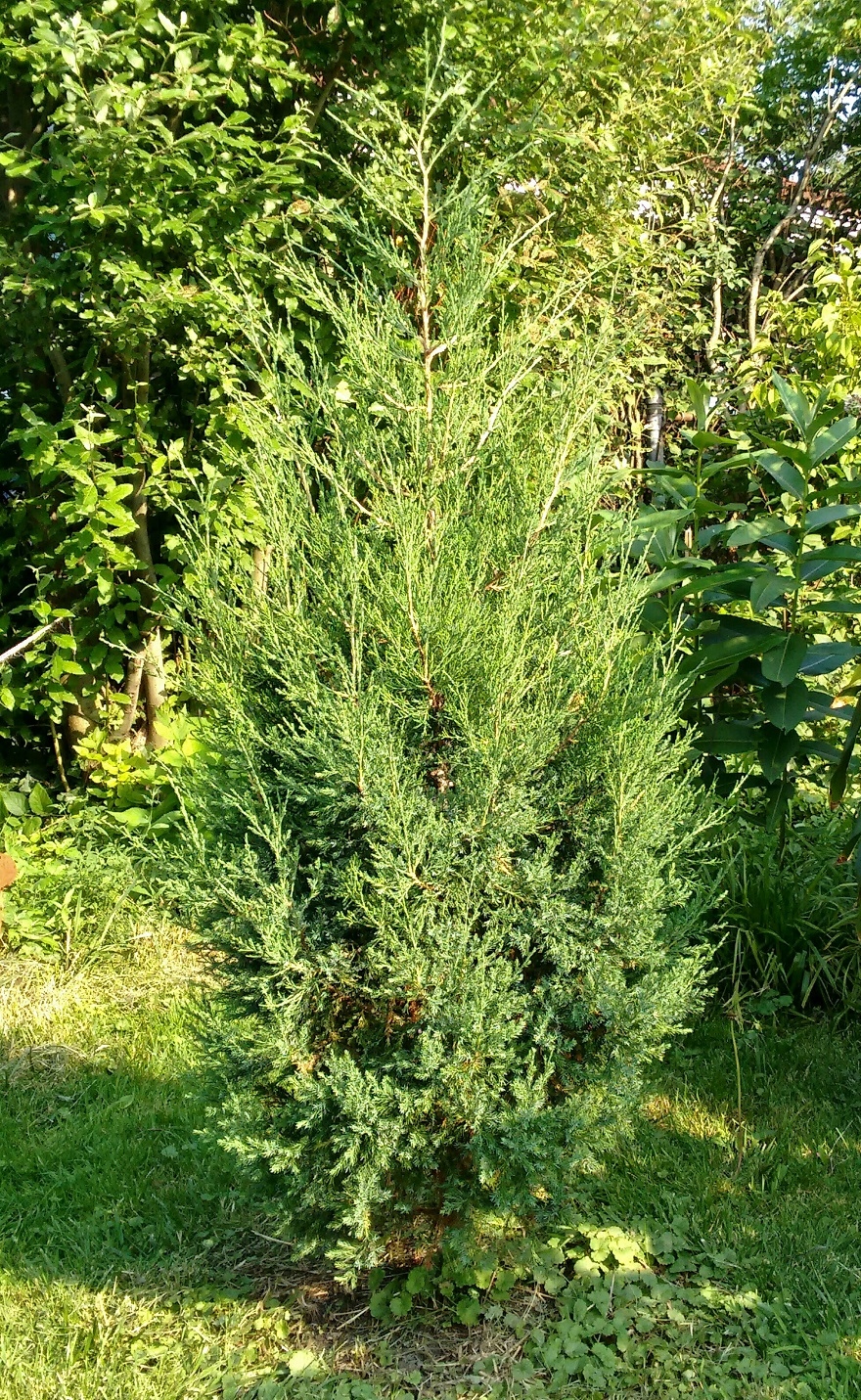 When the tree came down, I vowed to create new habitat, yet I’ve found most of the labor hasn’t been my own: it’s being done by succession. Nevertheless, I’m still trying to do my part. My husband and I added a small Eastern Red Cedar to the yard. Only 2½ feet tall when planted, the cedar now brushes the top of my head. When I expressed my delight to my husband, he observed—in classic ornithologist mode—that the tree was “still too small for Saw-whet Owls.” Very true. But perhaps, if the cedar continues to grow so vigorously, it won’t take too long to reach sufficient size to attract an owl.

These experiences made me realize: the sun is the true sovereign of the yard. The maple tree I cherished was a well-loved tenant. Succession with the sun as sovereign of the yard has turned out to be a more benign process than I imagined. And I find myself happily anticipating the rise of the kingdom of the cedar. I continue to miss the silver maple, but I can say with understanding, conviction, and a little bit of hope: The tree is dead. Long live the tree.